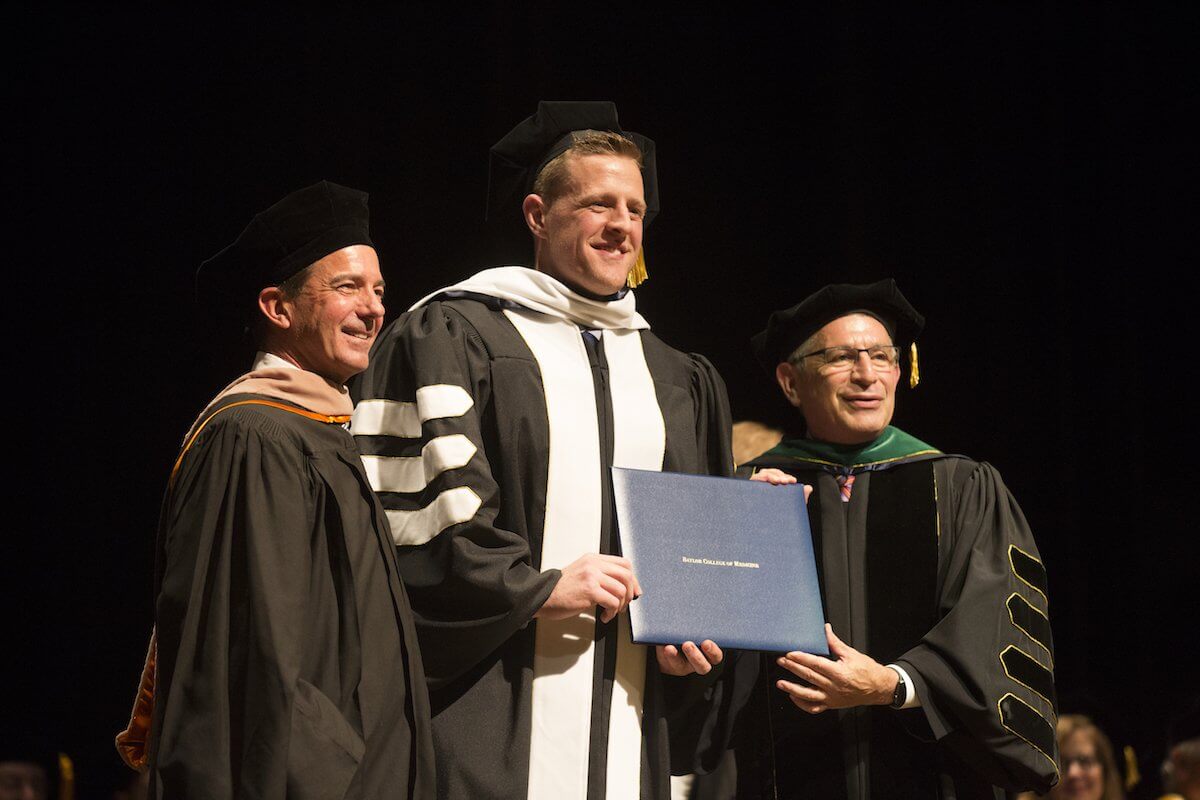 There was a very familiar face on stage Tuesday night at the Baylor College of Medicine’s 75th graduation ceremony.

But Watt, one of the most elite and well-respected athletes in the world, was not only there to welcome graduates, he also received an honorary degree from Baylor College of Medicine for his humanitarian response to Hurricane Harvey recovery.

Watt became a Doctor of Humanities in Medicine. He was among four distinguished recipients of honorary degrees.

“Since arriving in Houston, J.J., as a person in the community, he has consistently looked for ways to help others. Following the devastation of Hurricane Harvey last year, he set out to raise $200,000 and he ended up raising $37 million to help with recovery efforts,” Klotman said. “We thought it would be appropriate to recognize him for that. We didn’t know if he would want to do it, but he was very eager and he was honored to accept.”

Coincidentally, this is Watt’s first degree. He entered the National Football League draft in 2011 after completing his junior year at the University of Wisconsin and never graduated.

A doctorate in humanities degree is typically given to those who have provided support or service to Baylor College of Medicine, academic medicine as a whole or to the community at large.

“I’ve had a lot of big dreams in my life, but not even I dreamed I would become a doctor,” Watt told the audience. “There is one thing I learned throughout everything that happened during Hurricane Harvey, and that is the power of tapping into the inherent good that lies within everybody.”

Now in his eighth season as a Texan, Watt has made an impact as a player and in his colossal response to an unprecedented storm. Additionally, he founded the Justin J. Watt Foundation in 2010 to support after-school opportunities.

“That is my challenge to you: You have all done incredible things and you’re going to go on to do even more incredible things, but what I challenge you to do is to help bring out that inherent good in the people around you,” Watt said to his fellow graduates. “Help be that positive light, help be that person that everyone wants to be around and help be that energy that takes this world into an even better place. Because if we all do a little bit—if we all do our part—we can truly change the world, one person at a time.”

This year, there were two recipients of the prestigious Doctor of Humanities degree.

David E. Persse, M.D., director of the City of Houston’s Emergency Medical Services and a professor of Emergency Medicine at Baylor, was recognized for his outstanding leadership organizing relief efforts at the George R. Brown Convention Center in downtown Houston. He and his team were expecting 2,000 people in need of medical care, but that number ballooned to more than 10,000.

“The George R. Brown was not part of the Regional Plan of Shelters. It was part of our contingency plan,” said Persse, who also is the city’s public health authority in the Department of Health and Human Services. “You have a plan for your disaster, but the disaster, when it occurs, never matches your plan—so you are constantly innovating to solve problems that you never imagined.”

As more people arrived at the convention center, Persse and his team continued to think creatively and effectively to provide care to everyone.

“We just kept making more space and we called upon Baylor to help us out at the George R. Brown,” Persse said. “They not only stepped up, but stepped into the trenches and got to see what it’s really all about.”

The other two honorary degrees—the Doctor of Letters in Medicine—went to a pair of acclaimed researchers. Nobel Laureate Robert Lefkowitz, M.D., Ph.D., a professor of medicine, biochemistry, pathology and chemistry at Duke University Medical Center, received the National Medal of Science in 2007 and the Nobel Prize in Chemistry in 2012 for his work on cellular receptors. Alice McPherson, M.D., a professor of ophthalmology at Baylor, is the first retinal surgeon in Houston. She is one of the foremost retina specialists in the world and founded two vision research institutions.

Although the honorary degree does not mean “Dr. Watt” will be treating patients, the accolade does acknowledge his incredible efforts that will be emulated in the medical field by his fellow graduates.

“Perhaps when you were younger, you wanted to be Superman or Wonder Woman, Power Ranger, Harry Potter or J.J. Watt,” remarked Justin Michael Cardenas, M.D., the president of the School of Medicine’s graduating class. “We love these heroes because they served and protected humanity. … I imagine that the same forces that attracted us to our childhood heroes motivated us to go into medicine and become doctors. And we, like our heroes, are willing to sacrifice some of ourselves to help people we have never met—simply because they need help and we can help them.”