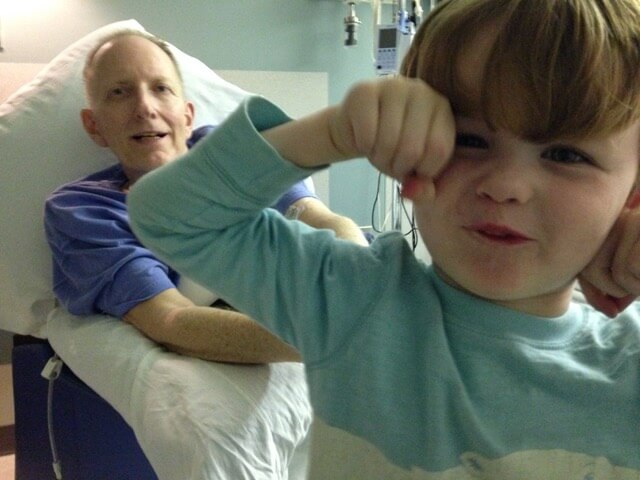 Imagine having a backache that leads to you staying in the hospital for four months. That’s exactly what happened to Jim Kessling whose back pain led to an extended hospital stay that he’ll never forget.

Kessling was initially diagnosed with diabetic ketoacidosis in September 2015, but an MRI examination soon revealed that he had infections in his right knee and lower back so doctors recommended immediate surgery and he was expected to be discharged in 3-4 weeks.

“I was surprised to learn of the infection in my spine,” Kessling shares. He had visited an emergency clinic for back pain the previous week but the x-ray exam did not show an infection so he was prescribed a painkiller and muscle relaxant.

As surprising as the diagnosis was, Kessling promptly underwent back and knee surgeries but the spinal infection returned the following month and clots were discovered in his legs. As a result, he had filters placed in his legs and Dr. Alexander Ropper, Assistant Professor in the Department of Neurosurgery at Baylor College of Medicine, performed back surgery to remove the spinal infection in mid-November.

“A titanium cage was installed to stabilize two damaged vertebrae. Pieces of the damaged bone were also removed,” Kessling recalls. “Absorbable antibiotic beads were packed into the deep open wound which had developed on the outside of my lower back. This treatment was done to make sure the antibiotic medicine reached into the area around the infected bones.”

After a month of recovery time, Dr. Ropper completed the spinal reconstruction and Kessling had a follow-up appointment with a plastic surgeon to repair the open wound the previous surgeries created.

Throughout his four-month hospital stay, Kessling endured many challenges. There was a 30 day period after his first back surgery when he was unable to leave the bed and the rest of the time, he was classified as a “fall risk” and had to stay in bed most of the day. “I was only able to get out of bed for three hours of therapy each day when I was accompanied by a therapist,” Kessling said.

Kessling’s family supported him during his long hospital stay and his wife, Nancy, credits their daughter Johanna and son-in-law Steven as individuals who rose to the challenge of helping her care for him.

Nancy Kessling advocated for her husband during his extended hospital stay and encourages others to do the same should they find themselves in a similar situation.

Jim Kessling returned to work three months after he was released from the hospital and was able to return to his normal routine before retiring last August.

He recently had a two-year follow-up appointment with Dr. Ropper and is doing well. “I have never experienced any back pain since my discharge and I do not take any painkillers,” Kessling shares.

The Kesslings credit the team approach from Baylor College of Medicine and CHI St. Luke’s staff for Jim’s success story.

“My husband would not be alive today if not for Drs. Ropper, Weinert, Izaddoost, and many other qualified, talented surgeons and surgical staff,” Nancy Kessling said. “We could not have had a better outcome.”