A Chat with the Original “Clutch”

The man behind the mascot, Robert Boudwin, shares his journey to becoming Clutch and his passion for organ donation

A Chat with the Original “Clutch” 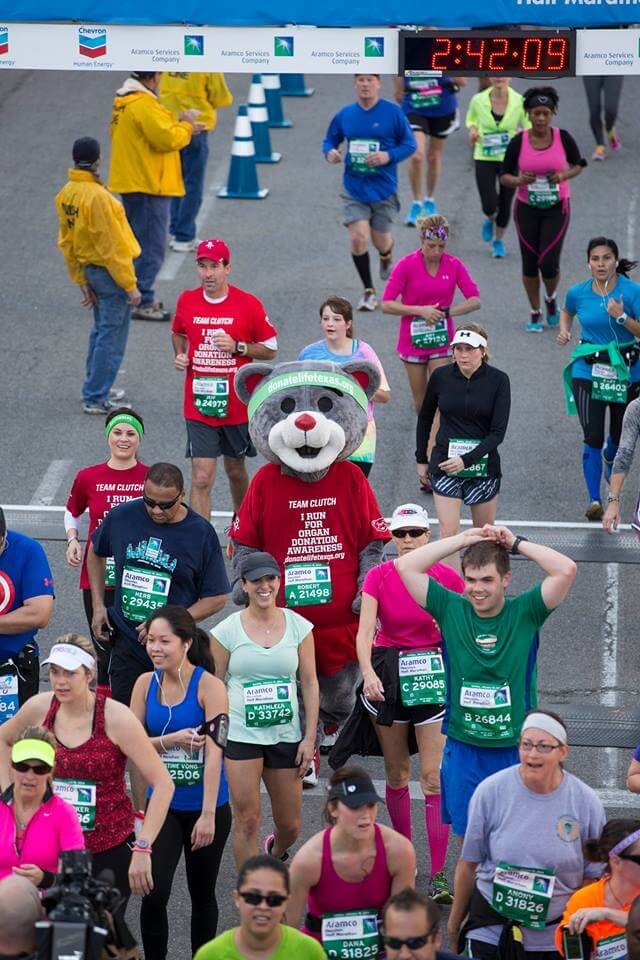 Robert Boudwin created the beloved Houston Rockets Mascot, Clutch, and performed for 21 years until 2016. Along his journey as the fun-loving teddy bear Houstonians adore, Boudwin also found his passion for organ donation when his father was diagnosed with a serious lung condition and needed a life-saving lung transplant. This is an edited version of his conversation with Pulse staff writer Britni N. Riley.

Q: Can you take us back to the beginning of Clutch?

A: I created Clutch in 1995. I wasn’t the first mascot for the Rockets, but I created Clutch. Our ownership wanted a teddy bear and I kind of took it from there. They didn’t want a big missile looking thing—they wanted something that could be funny with the adults and loveable and huggable with the kids.

Q: Did you grow up with the aspiration to become a professional mascot?

A: I always say that I went to school to be an accountant and I came out wearing fur and with a double major in marketing and management. I’m originally from Blue Bell, Pennsylvania, right outside of Philadelphia, and I was the mascot in high school.

I don’t know that I ever really set out to do it professionally—it was just kind of something that I was asked to do in high school. I met some people in college and was asked to try out, fumbled into an audition with the Rockets and I still do it to a degree now.

Q: You’re a guy from the Northeast. How did you land in Houston?

A: I was the mascot at the University of Delaware and I created the mascot there as well. They were always known as the Blue Hens, but in 1993, I created a character called the YoUDee. At the very end of the summer after my junior year, I started my position with the Rockets—right after they won the second championship—so I left and finished school part-time at the University of Houston while working for the Rockets.

Q: What is the best part of your experience as a mascot?

A: I like making people laugh and I like inspiring them. In that order. I’ve always thought that my personality as a mascot is similar to my own, only amplified. Everything is just a little bit bigger. Obviously as a normal person, I don’t walk up to strangers and hug them or sit on their laps or spray them with silly string, but as a mascot, you do that.

Q: Throughout your lengthy career as Clutch, what has made you most proud?

A: The thing that I did as Clutch that I am proudest of is raising awareness for organ donation. I was really touched and moved in every way possible when my father got his second chance at life in 2012 with his double lung transplant.

I very quickly realized there was an awareness issue. I remember the week my father got his transplant, the second week of February 2012, I met some people at LifeGift and realized there were only 2.9 million Texans on the Donate Life Texas registry. I got involved with them—in and out of costume— by joining their board, speaking on their behalf, advocating and fundraising.

Q: You garnered a lot of attention for twice running the Aramco Half Marathon as Clutch to raise awareness for organ donation. Describe that experience.

A: It was the single hardest thing I have ever done—running 13 miles in a teddy bear costume with limited vision, the heat factor, limited oxygen exchange, hydration, people wanting selfies. Ultimately, we moved a lot of people and I was one small part of a much bigger mission spearheaded by LifeGift and Donate Life Texas to help people register and raise awareness.

Q: What was your father’s lung condition?

A: My dad was suffering from idiopathic pulmonary fibrosis or IPF. It’s a non-lifestyle hardening of the lungs—sometimes you get it and pass away within six months of the diagnosis and sometimes you live with it for 20 years. There is no known cause. My father had IPF for four years. He was deteriorating pretty badly. He was on oxygen 24 hours a day. I was having lunch with my twin 3-year-olds at my parents’ house in The Woodlands and my dad couldn’t finish a sentence. I was about to leave town on an eight-day work trip performing at other NBA arenas around the country and I realized he was in bad shape. I cancelled my trip, called his doctor and rushed him to the hospital. The doctors told me that if I wouldn’t have rushed him to the hospital, he would have likely died from a heart attack or organ failure within 24 hours because his oxygen levels were so low. He also had a severe case of pneumonia and once they cleared that up, he was on the list and got his transplant within two weeks.

Q: The Rockets are ahead 3-2 in a seven-game series with the reigning NBA champions, the Golden State Warriors. What are your hopes for the team you cheered on for so many years?

A: I’m rooting for them. I’m hoping that all of those people at the Toyota Center end up with rings on their fingers. I still have a lot of friends there. I have two Rockets tattoos on me, so I’ll be a Rockets fan for life. From the part-timers that have been there ever since the Toyota Center opened—and some from when they played at the Compaq Center, when I started—to the full-timers: They all live and breathe that team and brand and steward it for our city every day, so I’m really hoping they get rewarded for all of that passion and hard work.