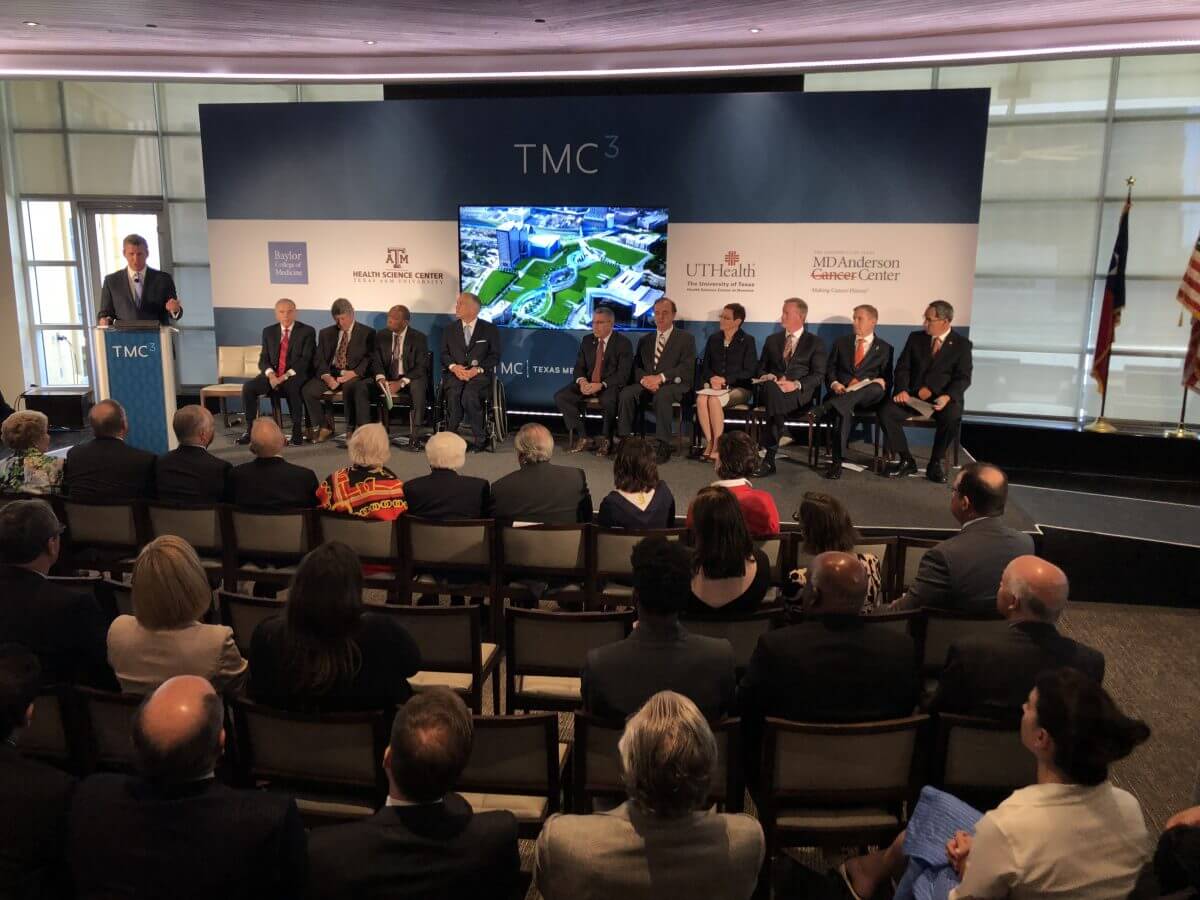 May 1, 2019 Update: To see the latest renderings of TMC3 read our latest coverage — “A leap forward for TMC3.”

City, state and Texas Medical Center (TMC) leaders convened this afternoon to announce the creation of TMC3, a new, multi-institutional translational research campus slated to break ground next year, with projected completion in 2022. The ambitious project will bring together the best institutions and brightest minds in clinical care, research and industry. A third-party impact study also predicted that TMC3 will drive $5.2 billion into the Houston economy and create nearly 30,000 jobs.

“The new 30-acre research campus will provide our top medical minds with the resources to remain at the forefront of the health care industry,” said Governor Greg Abbott ahead of the announcement. “This cutting-edge facility will not only generate thousands of jobs, but it will solidify Texas’ position as an international leader in biomedical research. I thank the Texas Medical Center, UTHealth, UT MD Anderson, Texas A&M University and Baylor College of Medicine for being a part of this transformative project, and for their continued commitment to changing the world though advancements in health care.”

“This is an indication to the rest of the world that in this city, we have decided to come together and play. And when we play, we play well, even in the post-Harvey era,” said Mayor Turner at the press conference. 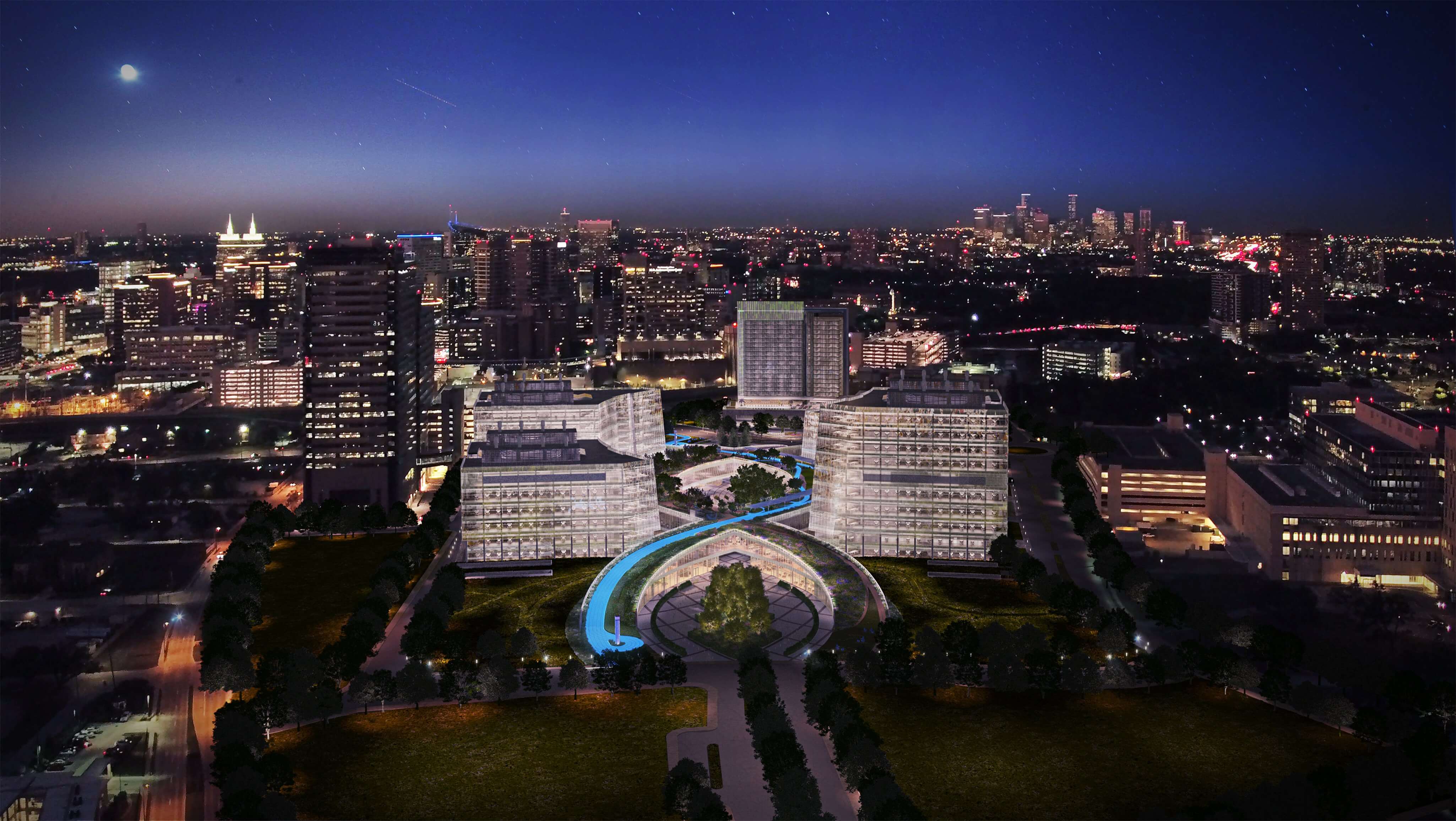 A rendering of the south end of the TMC3 campus shows a track that will be illuminated in the evenings. (Credit: Gensler)

Four years ago, for the first time since the Texas Medical Center was chartered in 1945, leaders from the TMC and its member institutions formed a strategic plan that would set the course of the world’s largest medical city for decades to come. Their bold vision identified six key areas of collaboration that would add value to each individual institution while helping the medical city as a whole compete on a global scale: innovation, health policy, clinical research, regenerative medicine, genomics and a city center for translational research.

But prior to the strategic plan, TMC executives were brainstorming ways to foster collaboration in research and attract bioscience industry to Houston. McKeon recalled an early meeting he’d set with the Houston office of Gensler, an international design and architecture firm that designed the initial concepts of the new campus.

“I remember saying, ‘Look, we have no money set aside for this, but we have this concept, and I want to create a sketch that reflects this idea of a truly innovative campus that is fostering collision and collaboration.”

An intern began to sketch and McKeon looked over his shoulder, watching him draw paths between four main buildings, crisscrossing and intersecting to promote meet-ups and conversations. For McKeon’s vision to be fully realized, the design had to encourage this kind of interaction.

“Discovery often doesn’t happen in the lab,” the CEO stressed. “It happens over coffee, it happens over a drink, or while running with a friend. It’s an accidental discussion.”

The intern’s pencil continued to move in broad strokes when McKeon suddenly saw what looked like a double helix. Everything clicked. TMC3 would be as big and as bold as it was groundbreaking.

Current blueprints feature four main buildings—cornerstones for the campus—connected by a three-tiered structure modeled after the shape of DNA, often compared to a twisted ladder and dubbed a double helix. TMC3 will stretch across nearly 30 acres just south of the current TMC, between South Braeswood Blvd. and Old Spanish Trail. With more than 1.5 million square feet of shared laboratory space, mixed-use permits and a focus on pedestrian traffic, the campus aims to be a true “live, work and innovate” environment, McKeon said.

The base floor of the double helix will hold three plazas saturated with trees and vegetation, as well as restaurants, commercial, retail and entertainment space to support the community day and night. The second floor will contain shared laboratory space so that institutions can work together and alongside industry experts. In addition to the five founding members, numerous TMC institutions already have plans to be involved, including those from the academic sector.

The top level of the double helix will be a park designed by James Corner Field Operations, the landscape architecture firm famed for its work on the High Line in New York City. Situated 60 feet above ground, the green space will feature walking and running trails, bocce courts, chef gardens, reading hammocks, children’s education gardens and more. The park will also bridge the bayou greenway systems, providing access points to the entire Houston community.

“These are essential amenities if we want to attract and retain the individuals who are going to become the intellectual cornerstone of our medical city,” McKeon said. “When we look at the places we’re competing with—San Francisco, Boston, Shanghai, Singapore—they’ve all evolved from just tall buildings with labs to a more integrative environment. This whole generation of emerging scientists and leaders in research won’t accept anything less.” 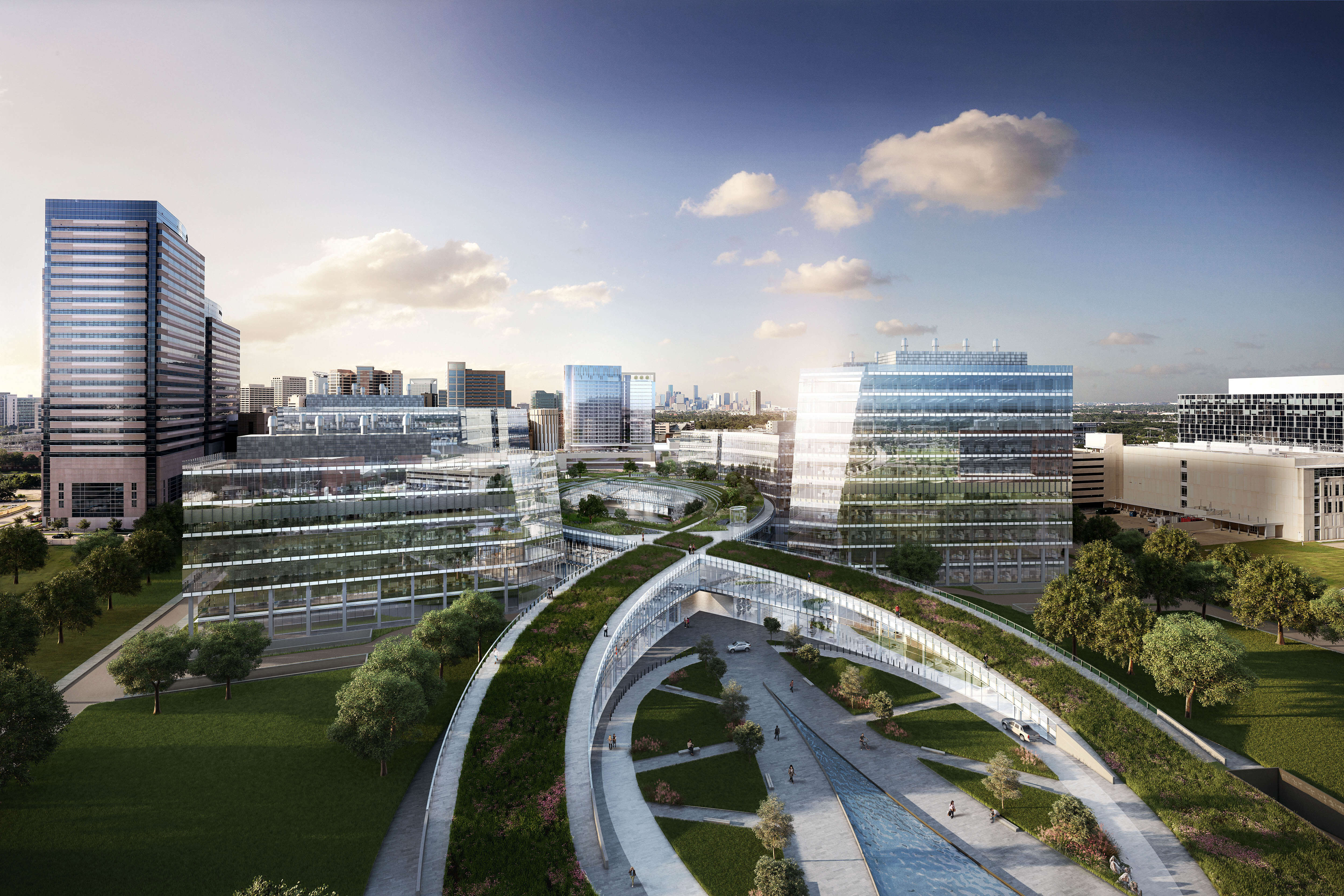 A rendering of TMC3’s double helix shows a three-tiered structure that will connect all the buildings on campus. (Credit: Gensler)

TMC3 marks the first time in Texas Medical Center history when a campus is being created to support multiple institutions. It’s goal, first and foremost, is to foster collaboration amid the culture of competition that is embedded within the 61 institutions that currently make up the TMC. McKeon likes to use the phrase ‘collabatition’ when referring to the ethos he hopes TMC3 will inspire, where collaboration plus competition equals something beneficial to all involved. It’s time, he said, for Texas to become the “third coast” for life sciences, so that Houston can compete on a global scale the way Boston and San Francisco have done for years.

“Our institutions have risen individually to become the best in the world, and we know that by aligning our efforts and resources, we will have the most prolific life sciences ecosystem in the world,” McKeon said. “For 70 years, the Texas Medical Center has thrived as competition spawned innovation unlike anywhere else. But just imagine what the next 70 years will hold if we maintain that competitive spirit while using our resources to work toward shared goals.”

For the five founding institutions, the opportunity to collaborate supported their overarching missions.

“Houston has been an education and research home to the Texas A&M University Health Science Center for more than 30 years,” Texas A&M’s Byington said. “I’m excited to continue working collaboratively with our peers across the Texas Medical Center and to witness firsthand the results of this novel endeavor, which will serve as a new model for biomedical innovation and collaboration. This will be especially important as we educate the nation’s future physician engineers or ‘physicianeers’ through our EnMed program, in partnership with Houston Methodist Hospital.”

McKeon noted that the trend in National Institutes of Health funding seems to be rewarding multi-institution research with bigger and better grants, a recognition by the government that more minds—or in this case, more organizations—are better than one.

The TMC3  campus will also encourage for-profit industry leaders to lease space, allowing for commercial partnerships and, ideally, an influx of venture capital. Alliances between institutions and commercial partners, McKeon said, will catalyze the development of new therapies, medical devices and digital health breakthroughs. It’s an opportunity that has never existed before in the Texas Medical Center, primarily because of the covenants put in place during its founding, which are written to attract not-for-profits and discourage industry.

But that was the past. The future, McKeon said, lies in the commercialization of research.

Texas Medical Center executives asked the TMC Board of Directors to revise the covenants for the TMC3 site as well as the TMC’s innovation site, the former Nabisco building on the southeast corner of Holcombe Blvd. and Almeda Rd. that houses the TMC Innovation Institute as well as the AT&T Foundry and Johnson & Johnson’s JLABS @ TMC and their Center for Device Innovation.

“My hat has got to go off to the trustees of the Texas Medical Center,” said Baylor’s Paul Klotman during the announcement. “You did the brave thing, which is to completely change the covenants around two plots of land.  … That is a visionary step.”

“We felt that by allowing for-profit use of that land, we could bring in pharmaceutical companies to work side-by-side with academic researchers and clinicians and really create a haven for accelerating discovery and moving groundbreaking therapies up to the front lines. It’s an opportunity that does not exist anywhere else in the world,” McKeon said. “If you’re at MD Anderson today, you want to make sure that your clinician knows the most advanced therapies and also knows the emerging therapies that are coming out of research, because a clinical trial may be your best hope.”

McKeon cites the Broad Institute in Boston as a model for researchers and industry working side-by-side.

“MIT and Harvard brought their best scientists together, and that collaborative network effect has accelerated discovery so much that it’s drawn more industry around it, and suddenly it’s become one of the fastest, most productive research spaces in the world.”

When institutions come together, McKeon explained, they gain the resources to invest in the most advanced technology and keep with the pace of innovation. Ultimately, he envisions industry giants like GE or Siemens adopting some of the labs as showrooms, which would simultaneously benefit researchers and their commercial interests.

“These partnerships will forever change the way we do advanced research and translate that research into discovery, commercialization, and ultimately the advancement of patient care,” McKeon said.

A beacon to the world

The Texas Medical Center and TMC3’s other founding institutions will break ground on the new campus in 2019. Flanking the area will be a 410-room hotel and conference center, which will provide 50,000 square feet of meeting space for researchers and clinicians from around the world to convene in Houston, fostering more partnerships, education and skill-sharing opportunities.

“TMC3 is the most important decision for the Texas Medical Center since it was founded,” Klotman said. “It is a huge step in developing the biotech industry here.”

The Texas Medical Center is already a destination for patients seeking life-saving treatment. It is a place for students to learn and for scientists to immerse themselves in research. It is a place for discovery and innovation, and TMC3 will be its beacon, a signal to the world that Houston is the next big player in health care innovation and biomedical sciences.

“We recognize we must do more than simply represent a collection of individual institutions that happen to share proximity. We must completely change the way we operate,” McKeon said. “Our institutions are aligning in new ways, leveraging our collective expertise. Our future is extremely bright and we are only limited by our imagination and willingness to work together to build upon our vision.”

That confidence is shared among leaders in Houston and beyond.

“TMC3 will, for a while, be competing with the best of the best around the United States and then the globe,” said Abbott at the press conference. “And then TMC3 will attain its rightful position of being the No. 1 biotechnology and biosciences center in the world. And we can do that because we are Texas, and Texas always achieves the very best.”

The Center for Hearing and Speech breaks ground on new campus