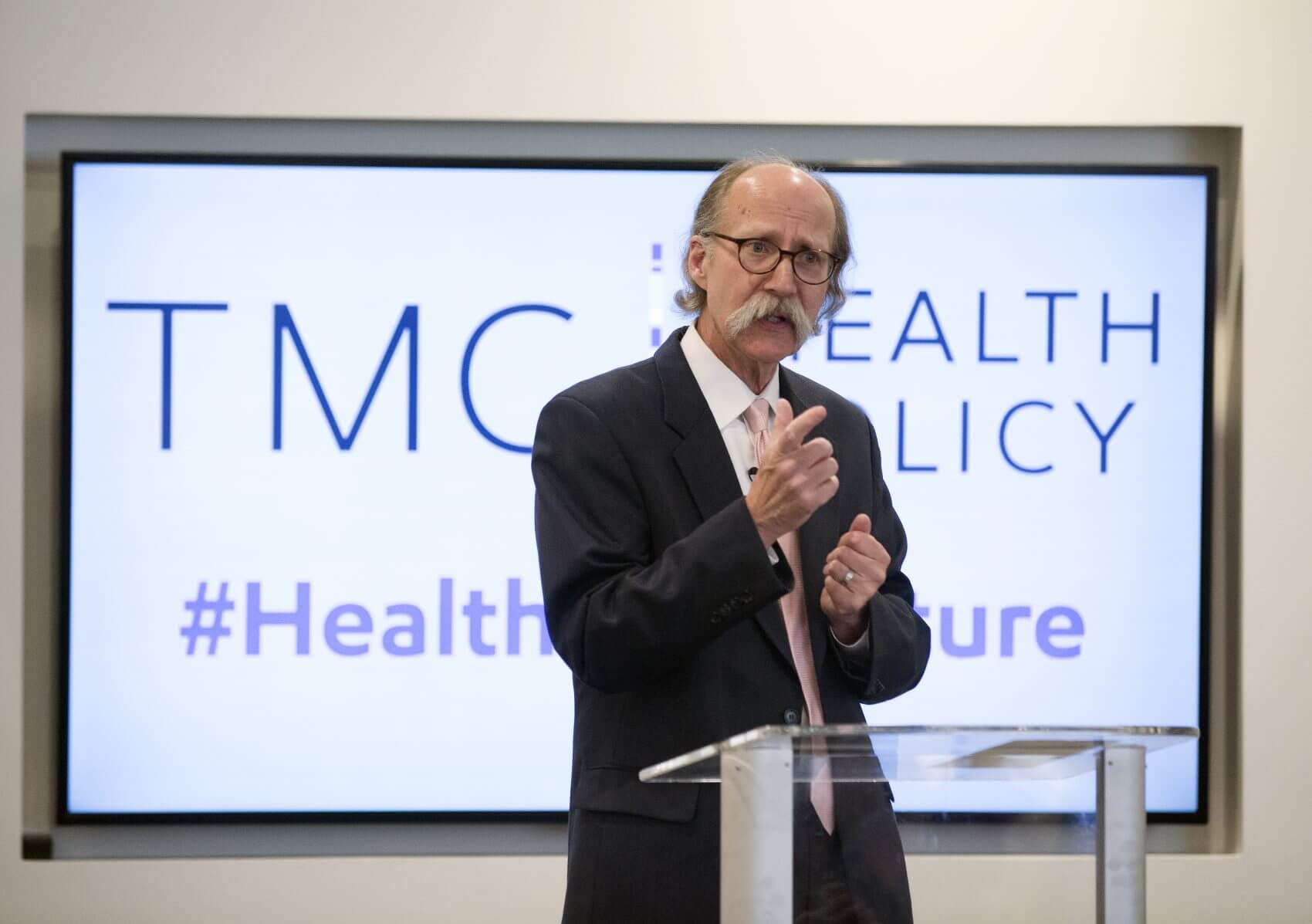 The final session on April 10 featured a panel—“U.S. Health Care: Where Do We Go Next?”—moderated by Stephen Linder, Ph.D., associate director of the TMC Health Policy Institute, the convening organization for the course.

Texas Medical Center President and CEO Bill McKeon delivered opening remarks to an audience of about 200 people. Over previous weeks, the course drew more than 1,300 participants in person and online, McKeon said, and participating panelists have represented more than 20 TMC institutions. Students attended from several colleges and universities across the region, as well.

Linder opened the discussion about national health reform by asking panelists what did and did not work in 20th century medicine. Most of the experts immediately addressed the cost of care.

Advancements in medicine have increased life expectancy in the United States, but not without repercussions, said Stephen Spann, M.D., founding dean of the University of Houston College of Medicine, which aims to enroll its first class in August 2020 and train primary care physicians.

“The consequence has been a steady rise in the cost of care without parallel, measurable increase in quality of care—leading us to a situation of low-value care, particularly when compared to other developed countries,” Spann said. “Health care systems that have robust primary care infrastructure have higher quality and lower cost of care—meaning high-value health care. Regretfully, that is not the reality in our own country.”

Michael Ewer, M.D., went deeper into the dollars. The professor of medicine and special assistant to the vice president of The University of Texas M.D. Anderson Cancer Center is also an attorney and a visiting professor at the Health Law and Policy Institute at the University of Houston Law Center.

He made his case by recounting a recent inquiry from his 7-year-old granddaughter about direct-to-consumer advertising: “Grandpa Mike: What’s erectile dysfunction?”

Linder shifted the last half of the conversation to the future and solutions.

Anita Hufft, Ph.D., dean of the Texas Woman’s University College of Nursing, predicts changes in medical education “to allow for people to practice to the extent to which they have been prepared.”

She believes that health care as a whole will focus more on prevention, engagement and ethics.

“I want a system where everybody gets what they need but I want everybody to have the autonomy to choose how they get it,” Hufft said. “We’re going to have to be a lot smarter about global and environmental conditions … and think about how we can engage folks in different ways—other than seeing them in a hospital or any emergency room— that might help them to be more functional, to have different kinds of lives, to be able to care for themselves, to be able to care for their communities.

“How we are going to establish values that we stand up for as a health and medical care community?” she continued. “The germs and the bugs and the diseases we fight are probably going to be the least of our problems going forward.”

“For the people: Accessible, affordable, adequate health care for everybody,” he said. “For the practitioners: Pay based on quality and less hassles. For the nation: Improve cost, quality and life expectancy.”

Some participants joined the course online via live stream. Look for #HealthCareFuture on recent social media posts for details about how the sessions were discussed online and in real time…