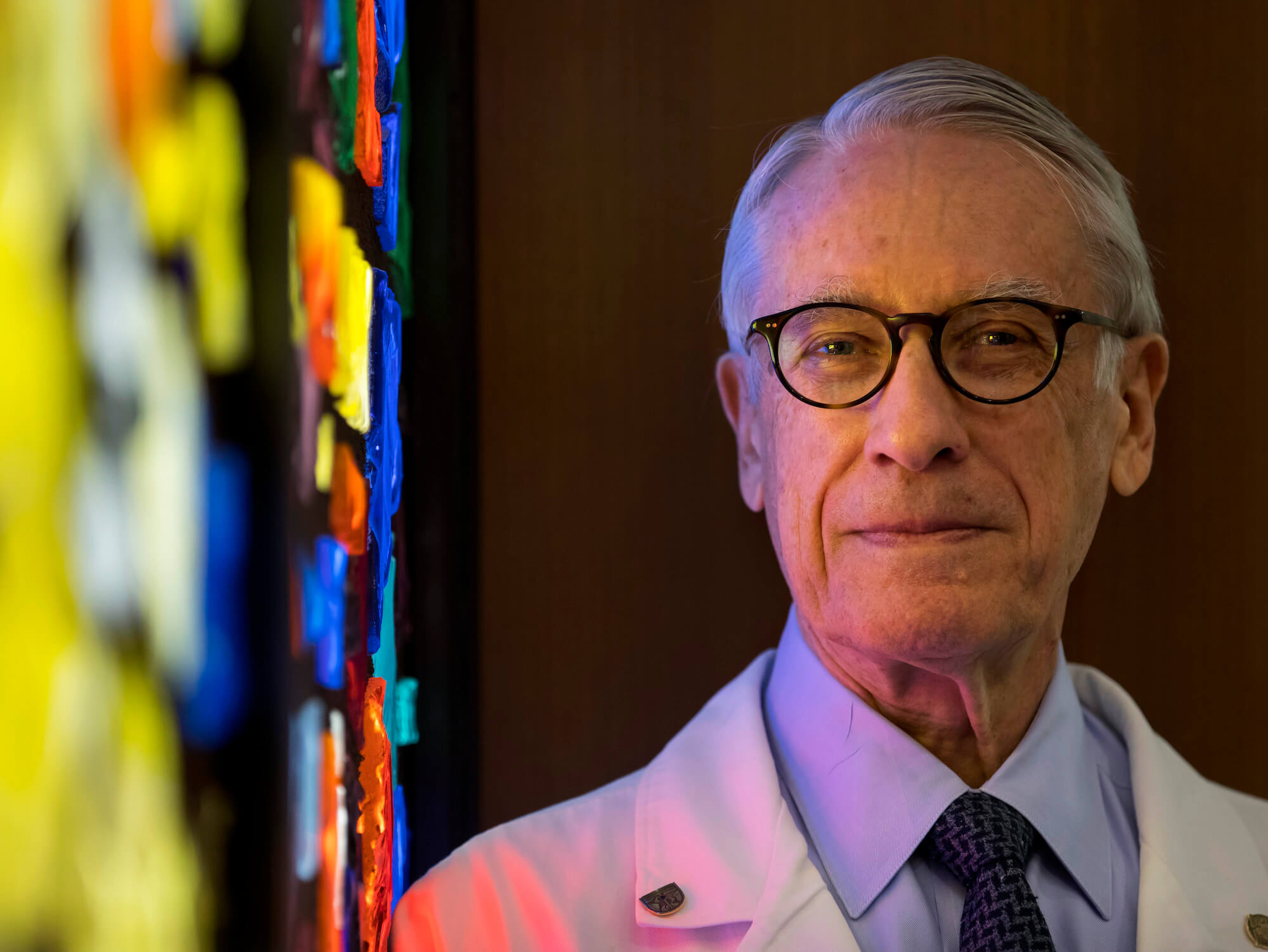 For decades, K. LANCE GOULD, M.D., a cardiology physician-researcher at Memorial Hermann-TMC and McGovern Medical School at UTHealth, has been studying PET imaging technology to determine how blood travels through the heart. Gould developed a way to pinpoint abnormal blood flow that works much like the Google Maps feature that shows traffic in real time, allowing cardiologists to predict a patient’s risk of heart attack five years into the future. He spoke with Pulse about creating PET scan software, growing up in rural Alabama and taking cardiology cues from nature.

Q | How did you come up with the idea to use PET imaging technology to map coronary blood flow?
A | I’ve always been interested in coronary blood flow and did some experimental studies. The way we used to deal with coronary disease was to take an angiogram and do bypass surgery. There was no measurement of the pressure flow characteristics, so I did a number of experiments and discovered what’s called coronary flow reserve: the capacity in the coronary arteries to increase their flow and to meet tremendous physical demands.

You could normally increase your blood flow four times, so you could run a marathon. In between, you don’t need that much blood flow. This flow capacity was limited by a narrowing of the artery—it didn’t affect resting flow, but it would impair the increase in flow.

Then, I developed the idea that physiologic imaging of the flow capacity was a measure of the effects of stenosis. It’s the idea that the angiogram [an X-ray test that helps doctors evaluate blockages in the arterial system] is the anatomic severity, but the blood flow is the physiologic or functional severity. It was the first time that anybody ever put that down.

Q | You developed this idea while you were completing your cardiology residency and fellowship at the University of Washington School of Medicine in Seattle. How did you end up in Houston?
A | I realized that to make this work, I’d have to go somewhere other than Seattle. At the time, I got an offer to be chief of cardiology here [at UTHealth]. That was in ’78, and I said, ‘Okay, on condition that you’ll find the support to set up the whole PET system.’

The first really whole heart PET [positron emission tomography] scan was a brain scanner that was quite small. We built the first system and proved that you can find early heart disease. Since then, research has been driven toward better scanners and better protocols.

What it boils down to is that if the condition is severe, you need the procedures, but then it rules out a lot of unnecessary procedures. There is a fair amount of angiograms and procedures that don’t do much good because they don’t have the measurements to treat the patients right.

Q | You currently have an agreement with GE Healthcare System for PET scan software that you and your team developed, but you are working with GE as an unpaid consultant. Why?
A | Texas law says that intellectual property can’t be given away to a commercial operation. But my team and I were strongly opposed to the conflict of interest that we see in so much of medicine where docs patent stuff, hawk it out and sell it. Half the time it’s garbage. And there’s a lot of patented garbage that docs do. We didn’t want to get into that.

We talked to the university to have them agree that whatever property they gave GE, they would have a minimum charge that met state law requirements, and that any royalty that came in would not go to us but it would go to research or to medical scholarships, because we didn’t want a dime of that. From my point of view, that’s dirty money. Now, a lot of people do it, they think it’s okay, it’s a way of stimulating development. But not for me, and not for my team.

Q | You grew up in a small, rural town in South Alabama and spent much of your childhood tagging along with your father, who was a family doctor, during patient visits. Did that exposure to medicine steer you towards a career in medicine?
A | I used to go on house calls with him in his old Jeep. He would talk to me and take care of the people, and I’d help boil the instruments for delivering a baby. But it was overwhelming—all that stuff you had to know.

I decided on physics in college, not medicine. Physics was fun, but I realized I wasn’t gifted in that position, which you have to be to be a physicist. My senior year, I took my first biology course and fell in love with it. Plus, my lab mate was a very beautiful girl. I loved it so much that I switched over to medicine, and physics was a wonderful background for medicine. Right away, because of physics, the fluid dynamics and the pressure fluid equations, it just kind of fell into place.

Q | In your book, Heal Your Heart: How You Can Prevent or Reverse Heart Disease, you write about early childhood experiences with your father that were the source of your interest in cardiology. What were your father’s early years like?
A | He was born in Ludhiana, India. His mother was a missionary doctor and his daddy was a missionary preacher. He grew up in the British school system, very strict, but ran around the jungles with his two brothers and spoke Urdu as well as English for a long time. He has this kind of foreignness about him. He left home very early and then bummed around the world. He was a boxer for a while, cleaned windows in Chicago, was a taxicab driver and so on. But he was smart. His uncle put him up to medical school. He settled down, went to medical school in Louisville and went into practice—as all doctors did then—in general practice in the Kentucky mountains. He had some odd quirks about him.

Q | What kinds of quirks?
A | He grew up in India, so he was used to snakes. He made house calls on horseback. He had a couple of rattlesnakes in a big cage by his window in the cabin. One day, he got this call and takes off
on his horse for a six-hour house call. He comes back home and the window’s been jimmied open and all the jimmy tools were left on the ground. Somebody ran. What happened was that this burglar jimmied open the window, put his foot in, stepped on top of the rattlesnake cage and set them off. The guy said, ‘I’ve gotta get out of here!’ 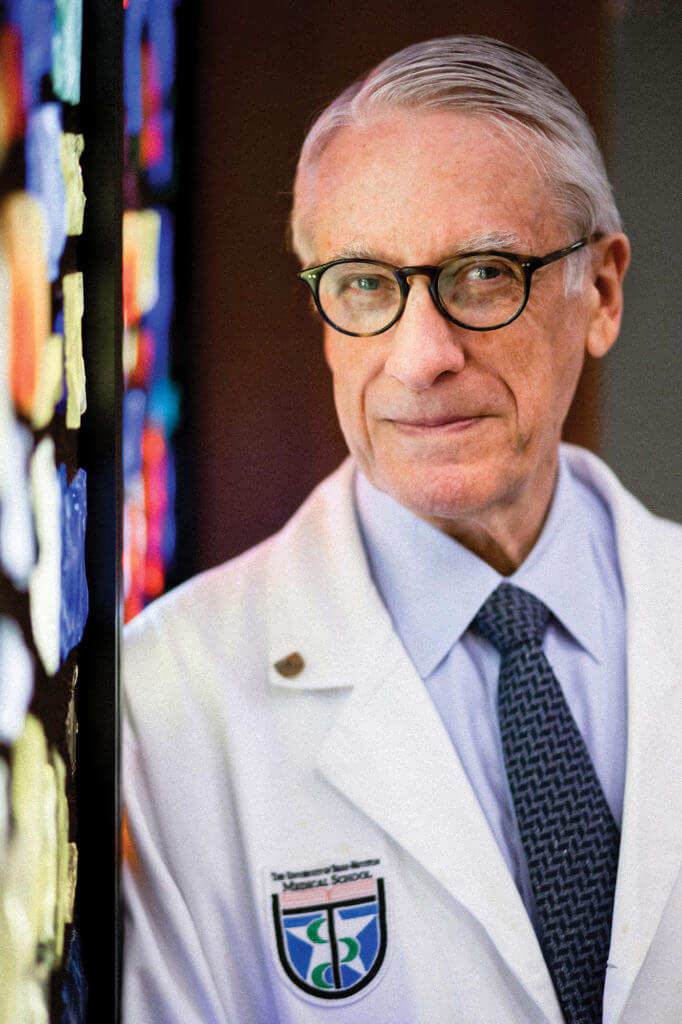 Q | How did your parents end up in a small town in Alabama?
A | My father met my mother and they were traveling around to find out where to live. They stopped in a little town in Alabama called Wilsonville. It had no traffic lights, no painted houses, no cars. The mayor knocked on the door and said, ‘Well, if you stay, we’ll help you build a clinic and give you the land.’ He said, ‘Okay.’

My mother has a Ph.D. in European architectural history. She found herself in southern Alabama, cooking greens for the hospital, with barefoot boys, teaching them a little bit about the civilized world. She was really smart. We had a museum. We collected rocks. We collected animals and had a big zoo of odd creatures running around the porch all the time. She collected shells. She taught us music. She was our professor for the first four years.

Before they got the house built, we lived in an old abandoned bank building. My father delivered all three kids himself, and I was born in the bank vault. Then he turned the vault into a little clinic.

Q | It sounds like your parents were the perfect combination of adventure and academia. How did those traits shape your career?
A | Daddy was the adventurer. Mother was the real academic. From my daddy, I learned not to be afraid of anything. A lot of research is a gamble. You don’t know where it’s going; you don’t know the answer. You have to go with your instincts and the signals from the data. The data isn’t always clear, but I find if you open up and don’t be afraid, the ideas come out of the signals.

Q | You’ve received numerous awards. Most recently, the American College of Cardiology named you a Distinguished Scientist for Translational Medicine. What has motivated you throughout your 54 years as a physician and researcher?
A | Nature has these marvelous survival tools. The mammalian heart, with four chambers and coronary arteries, actually evolved even before the dinosaurs. There were small, furry marsupial creatures that were running around the forest while the dinosaurs were chomping each other up.

The reason that’s so important is that their blood flow, the extreme flow capacity with stress and their fur, allowed them to survive extreme environments. There were massive glaciers and then there were five great die-offs of sea life, land life, dinosaurs, either because of massive glaciation or because of volcanic activity.

But these little creatures survived, and the reason they survived is because they had a heart like [ours]. This was before their brains were even very developed.

Nature’s there. Nature tells us the signals of what it takes to survive. It comes down to: if you have enough blood flow, you will. If you don’t, you won’t. It’s just a matter of discovering these things
and that’s what’s exciting.

It has nothing to do with me; it has to do with having the tools and eyes that let you see what nature’s signals are. And sometimes docs get a little ego involved and say ‘My way is the better way,’ without realizing that [nature] is the way. We just need to discover it. That’s what keeps me going—discoveries that are just endlessly interesting in every patient.

Every patient teaches me something new, and it’s just astonishing, day in and day out.

K. Lance Gould, M.D., was interviewed by Pulse writer and columnist Shanley Pierce. This interview was edited for clarity and length.