Solutions: Could a Handheld Ultrasound Replace the Stethoscope?

A UTMB course teaches students how to use the device

Solutions: Could a Handheld Ultrasound Replace the Stethoscope? 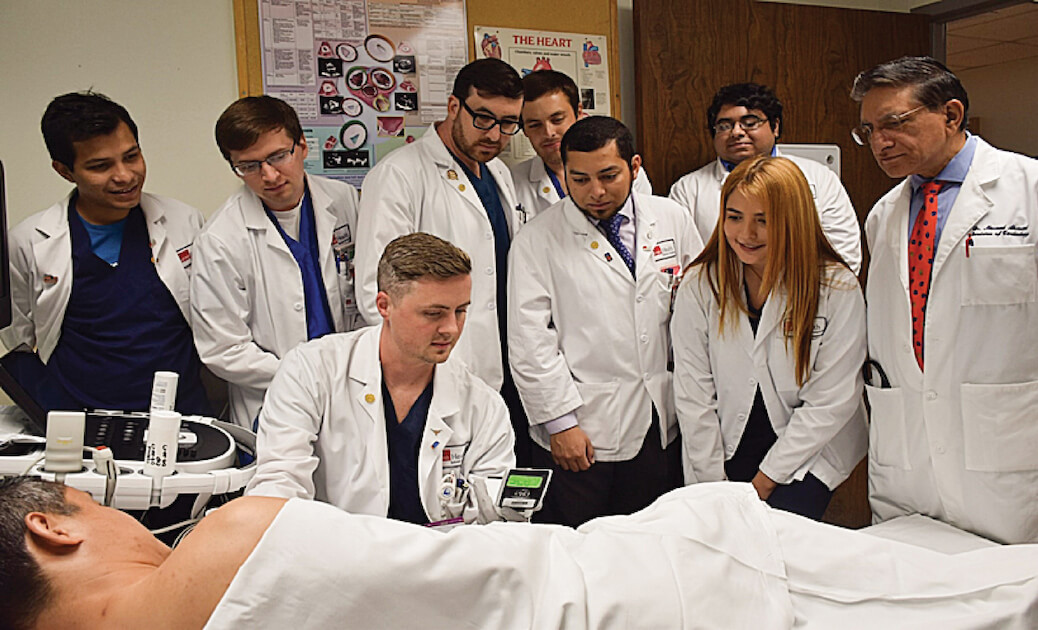 As medicine evolves, so do the tools used by health care professionals.

Masood Ahmad, M.D., professor of internal medicine and director of the Cardiac Echocardiography Laboratory at The University of Texas Medical Branch at Galveston (UTMB), has all but traded his stethoscope for a newer device to gather information about the heart more quickly and efficiently.

Instead of using a stethoscope to “auscultate,” or listen for heart sounds, Ahmad uses a handheld ultrasound. He prefers the GE Healthcare Vscan Pocket Ultrasound Dual Probe, but Phillips makes a similar device called Lumify, he said. 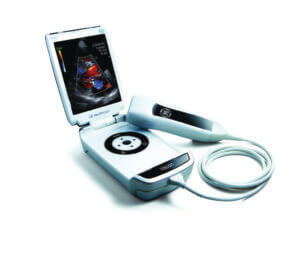 The Vscan is used for point-of-care imaging. Credit: Courtesy of GE Healthcare

The device, which looks like an old flip phone, is easy and convenient to carry. A small screen on the device shows images of the heart that can be recorded and transferred to an archiving system or shared with a colleague. When Ahmad is on call, he can even communicate with his colleagues by video and share the ultrasound.

“It’s very helpful in emergency situations in deciding what to do with a patient,” Ahmad said.

While a stethoscope allows the user to hear the heart, the handheld ultrasound probe allows a clinician to “see the sound,” which is helpful to that segment of the population with hearing deficiencies.

When Ahmad’s students saw him using the device, which has been gaining in popularity in recent years, they wanted to try it out. That prompted him to create a two-week course to teach point-of-care echocardiography at the bedside.

A number of other medical schools across the country are offering similar courses, Ahmad said, because cardiologists, intensive care physicians, ER doctors and critical care units are finding that ultrasounds are indispensable for interventions and quick bedside evaluations.

“Medical schools are adapting and locating this technology early on in medical education, and I think it is a trend that will continue,” Ahmad said.

In a 2014 commentary published by the New England Journal of Medicine, Scott D. Solomon, M.D., and Fidencio Saldana, M.D., from the cardiovascular division of Brigham and Women’s Hospital and Harvard Medical School in Boston, Massachusetts, stated that diagnostic ultrasound has all but replaced auscultation in obstetrics, cardiology and gastroenterology. But they also noted that a “generation of physicians will need to be trained to view this technology as an extension of their senses, just as many generations have viewed the stethoscope.”

Ahmad’s UTMB course includes lectures on the device and its cardiac applications. Students practice with volunteers and learn to read a normal ultrasound. Then they learn to use the device and to detect conditions that range from pericardial effusion (fluid around the heart) to heart failure. At the end of the course, students are tested on basic techniques and their knowledge of common diseases.

The only factor that would prohibit the mass use of handheld ultrasounds is cost, Ahmad said. Portable ultrasounds are expensive—between $10,000 and $12,000—but he expects that will change as the use of the device becomes more widespread.

“It won’t ever be as cheap as a stethoscope,” he admitted.

And to be fair, Ahmad still uses a stethoscope when he wants to listen to breath sounds that may help diagnose conditions that range from bronchitis to heart failure.

But in addition to carrying a stethoscope, Ahmad believes clinicians will someday carry portable ultrasounds in the pockets of their white coats.