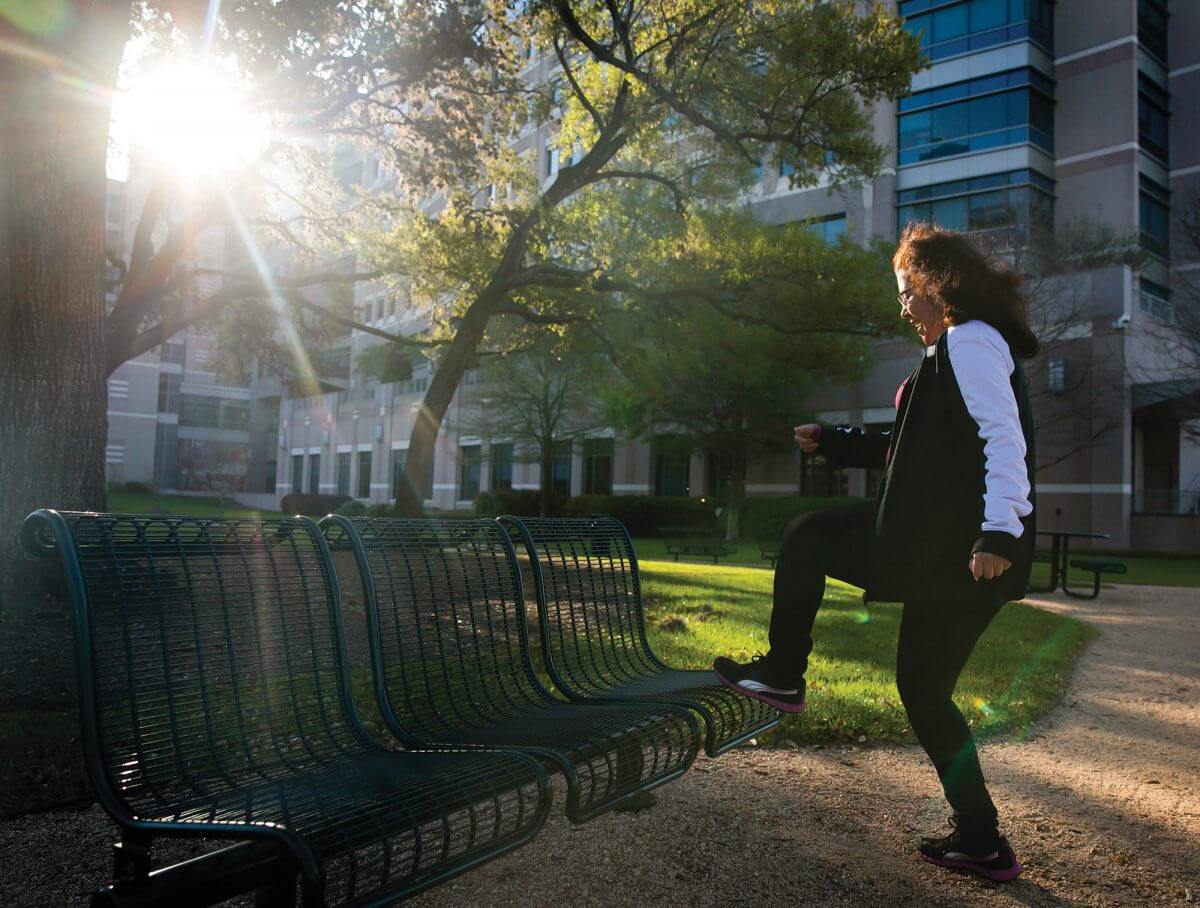 Yadira Peña never wanted to hear those three words again. After surviving cancer twice—breast cancer in 2002 and ovarian cancer in 2009—Peña decided to turn her physical life around, to seek a healthier, more active existence.

“I remember when I got the second cancer diagnosis, I was ready to leave the hospital and go home,” Peña said. “I think it was more difficult because I knew what was coming—the chemotherapy, the surgeries.”

After completing her treatment for ovarian cancer, Peña’s care team at The University of Texas MD Anderson Cancer Center approached her about participating in a program they had been working on with the Kelsey Research Foundation, called Active Living After Cancer. Different iterations of the program have existed at MD Anderson since the 1990s, under the direction of Karen Basen-Engquist, Ph.D., MPH, and Cindy L. Carmack, Ph.D.

“We got interested in physical activity as a program to help cancer survivors recover better after cancer and improve their quality of life,” said Basen-Engquist, professor of behavioral science and director of the Center for Energy Balance in Cancer Prevention and Survivorship at MD Anderson. “Around that time, there was some work being done by a researcher in Canada showing that exercise was not only safe for people with cancer, but also had benefits. We were interested in bringing some of that type of research to MD Anderson, but we took a little bit different approach.”

As behavioral scientists, it was the goal of Basen-Engquist and Carmack, a professor in the department of palliative, rehabilitation and integrative medicine at MD Anderson, to make a long-lasting impact on the women enrolled in the program, rather than promote short-term weight loss or fad dieting.

“We are talking about incorporating physical activity into daily life, as well as going to the gym,” Basen-Engquist said. “For example, I took the stairs today. We encourage people to take the stairs, park far away from their office, count their steps with pedometers—increase their step count. It’s really focused on short bouts of moderate intensity and getting them to increase their overall activity.”

Basen-Engquist explained that many cancer survivors do have issues after their cancer treatment—they are deconditioned, their physical functioning has declined and they experience early aging.

She said the main goal of the program is to get people feeling better, to boost their energy and to regain some of the strength they lost over the course of their cancer treatments.

“I used to be very sedentary before cancer and after, too,” Peña said. “I had the best excuse: I had cancer. I was not planning to do any exercise, but when I was finishing my treatments, they told me the benefits of physical activity and that it would take me far away from the recurrence of cancer. … That got me.”

When Peña began the 12-week program in 2015 with two of her sisters who are also cancer survivors, she averaged around 300 steps a day and was conserving as much energy as possible.

“I had a saying—‘economic movements.’ My family knew me for that,” Peña said. “Don’t do that twice—do it once and that’s it. If there’s a car, why walk? I used to keep one box downstairs and one box upstairs. That way, when Ineeded to take things downstairs, I would take them in one flight.”

Reaching the class goal of 10,000 steps per day seemed nearly impossible for Peña at first, but soon that became a light day of walking for her.

Peña began running several miles a day to train for the Aramco Houston Half Marathon in 2017. She trained for more than a year.

“This is the thing I told my body when I was running: ‘Okay, my arms, my legs worked together on the chemo and it was not for fun, and we did it—twice. We are going to do it right now. It’s going to be hard; it’s not going to be easy, but we’re going to have fun and get that medal that says you finished,’’’ Peña said. “I was mile by mile saying, ‘We’re almost there and everybody is going to be clapping.’ It was kind of a release to me of the situation of the treatment.”

But the goals and objectives of Active Living After Cancer go beyond physical activity.

“It’s not a group where we only get together and do exercises. It’s a behavioral skills program,” Basen-Engquist said. “Idea tools for problem-solving or overcoming barriers to being more physically active—SMART goals. We talk about finding social support, identifying people who can help you meet your goals.”

Peña began to apply these new skills to other parts of her life. “When I got to this program, I got this idea, too, of going back to college,” she said. “I graduated in December 2017. I finished my bachelor’s degree from the University of Houston-Clear Lake and then they offered me a partial scholarship for my master’s, so now I am getting my MBA. It’s applying all of these SMART goal idea tools.”

In addition to going back to school, Peña is now a health educator for the Active Living After Cancer program.

“This combines everything for me,” Peña said. “I’m a survivor, I can talk to survivors, I was there at the beginning and this program has changed so much. It has been so rewarding to be able to provide to others what has really helped me.”