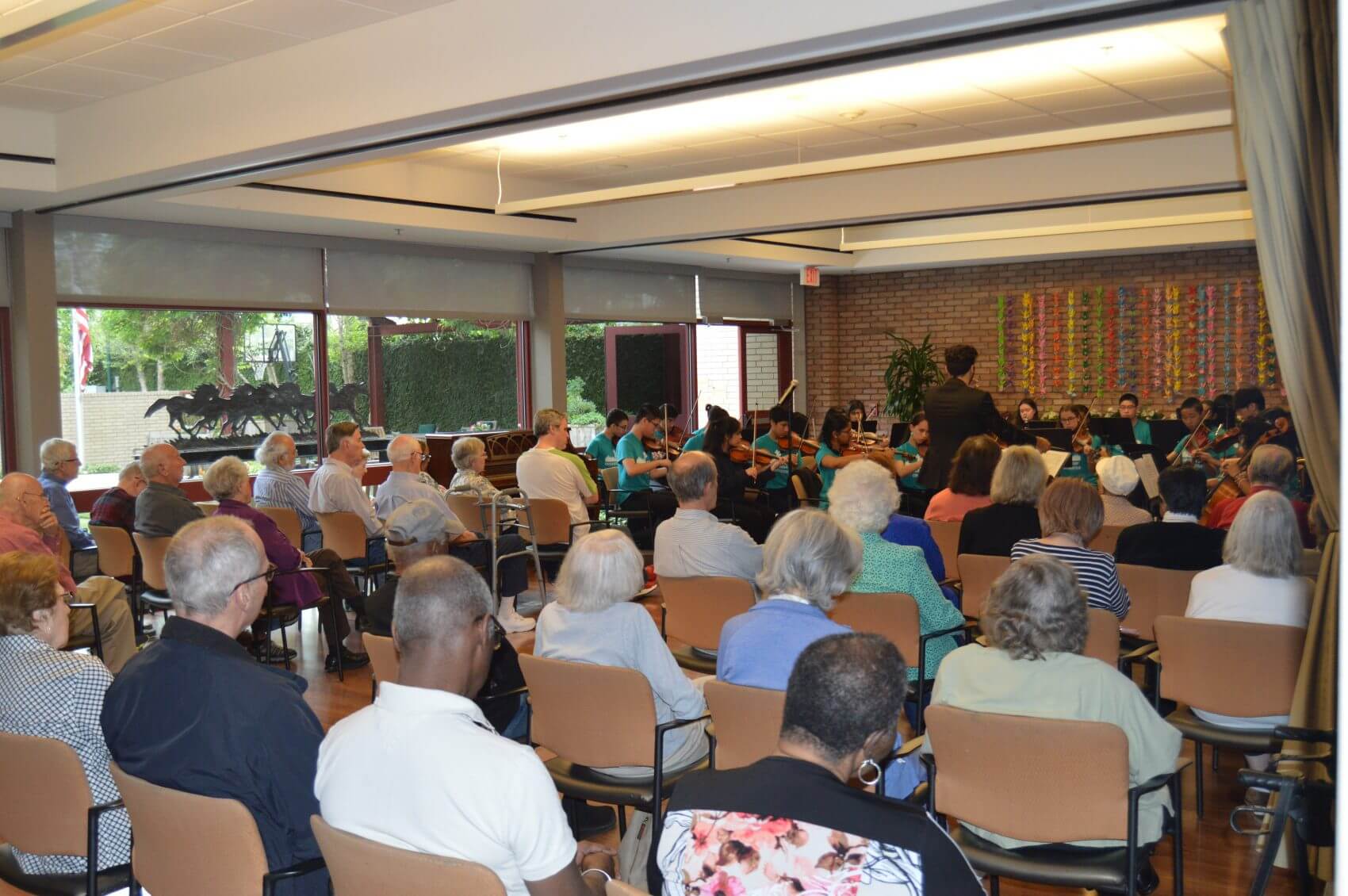 Throughout the 2017-2018 school year, DeBakey students have performed for audiences in various health-care facilities, including their most recent concert at Amazing Place, a center for patients with mild to moderate Alzheimer’s (pictured).

The core mission of the orchestra program at DeBakey is to provide students with a space for musical expression while fostering altruistic values that benefit the community. The musical director at DeBakey, Carlos Guillermo Jung, said: “The DeBakey orchestra allows students to find their inner musical voice and provides them with an enriching outlet for artistic, intellectual and emotional expression in the midst of their rigorous academic curriculum. The most remarkable component of the program, however, is that students prepare a wide selection of music tailored to the diverse populations encompassed within the medical community.”

“For instance, multiple research studies from the past few decades have increasingly recognized the power of specific musical styles to improve the lives of those suffering from neurodegenerative diseases, including dementia,” Jung said. “Taking this factor into consideration allowed me to program a concert such as the one at Amazing Place that could focus on music by composers from the Classical period, including Mozart.” “The Mozart Effect in that patient population has become widely known in recent years. The concert proved to be therapeutic for the patients as well as an enlightening experience for the students.”

At another concert offered to patients at Shriners Hospital for Children in November, members from the DeBakey orchestra put together a program comprised of music from Disney soundtracks. The beloved songs from Aladdin, Beauty and the Beast, The Lion King, The Little Mermaid and several other movies could be appreciated from every floor of the hospital. “The unique architectural design of the building allows the music to circulate throughout the entire space, reaching a larger audience than what we see.” Jung remarked.
The same day, the orchestra hopped on the bus that took students to their following destination: Memorial Hermann Hospital. For that occasion, the repertoire included pieces that would appeal to both young and adult audiences such as tangos, a selection of waltzes and other soundtrack pieces. “I love these concerts that occur during the school day,” Jung stated. “We call them musical rotations because they involve touring different parts of the medical center while bringing our medicinal music to those who need it the most.”

The DeBakey orchestra members also participate in a collaborative partnership with Houston’s Orchestra On Call. The combined group, which adds up to over 60 musicians, presents side-by-side performances in different retirement communities throughout the Houston area. In December, the orchestra prepared a Christmas concert for residents at The Village of Tanglewood and more recently, it offered an all-classical program at Brazos Towers Bayou Manor assisted living facility. Upcoming appearances include a performance at St. Dominic Village, a senior care community in the Texas Medical Center.

“By bringing together volunteer musicians from across the spectrum of high school students, college students and professionals in different fields, the partnership facilitates a mentoring structure among its members, enriching their musical experience while making a difference in the lives of those to whom the orchestra plays,” Jung said.