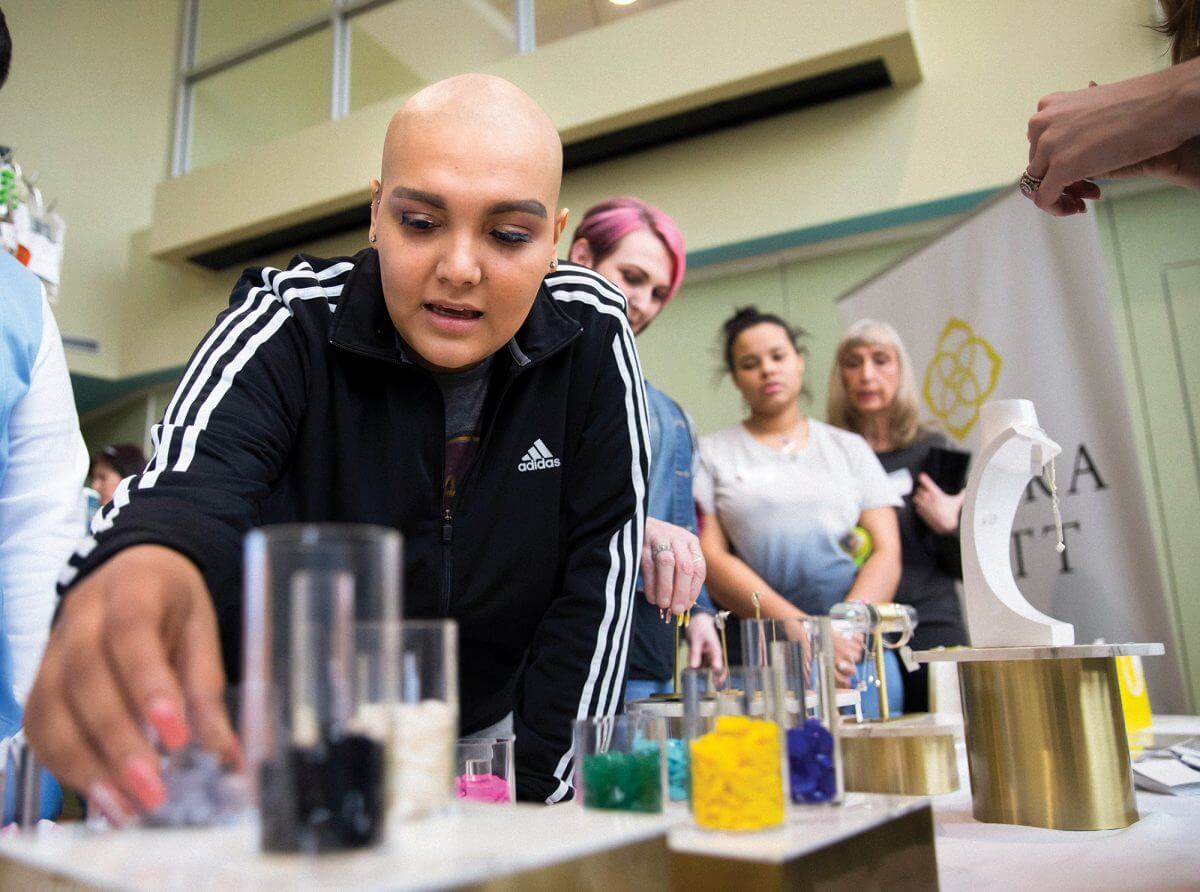 A line has formed outside of the PediDome, a multi-purpose room on the pediatric oncology floor at MD Anderson Children’s Cancer Hospital. Children of all ages—some walking with IV drips and some in wheelchairs—are waiting with their families to make their very own piece of Kendra Scott jewelry.

For Kayla Jefferson, 20, the Kendra Scott Color Bar has become a respite through her seven months in the hospital to treat osteosarcoma, the most common form of bone cancer in children and young adults. After undergoing a massive surgery in her right leg to remove her knee joint, Jefferson must complete 30 weeks of chemotherapy.

“Losing your hair is pretty hard,” Jefferson said. “I had really long hair and I just buzzed it all off because it kept falling out in clumps.”

Jefferson is wearing a large knee brace and chatting with her mother and new friend, Anne, about the jewelry she will make.

“I like that they use stones,” she said. “It’s just nice to have a little bit of oomph when you feel like you’re losing your hair and you don’t feel the prettiest and then all of a sudden you get someone who brings you jewelry and tells you that you’re beautiful.”

Kendra Scott jewelry designs are known for their geometric shapes and bright colors. Once a month, the designer’s team brings an in-store shopping experience straight to the patients at MD Anderson, at no cost to them or the hospital. The Color Bar, part of the Kendra Cares Program, is one of the hospital’s best-attended events.

“It’s a fun experience for anyone because you are designing and creating something,” said Mackenzie Cash, community relations and events manager for Kendra Scott. “Once they pick their silhouette—they can choose from two different types of earrings, a necklace, and two different types of bracelets—they decide if they want silver or gold and then from there, they pick the color option for the stone. We have 12 different stone options.”

Jefferson decides to make a new bracelet for herself.

“Each piece of jewelry I make symbolizes my journey and what I have gone through,” she said. “This bracelet I got … the color of the slate gray stone—it’s kind of dark, but it also has this light side at the same time. It reminds me that even though there will be stormy times, I know that I can make it through.”

‘We always have something to give’

Lifting patients’ spirits has been a mission for Kendra Scott since her stepfather was treated for brain cancer at MD Anderson.

“It was a really pivotal point in her career. She was young when that happened and she has remained involved with MD Anderson,” Cash said. “Kendra always says, ‘We always have something to give.’ We did the first mobile Color Bar here at MD Anderson three years ago and now in 2018 we are moving into 30 children’s hospitals.”

In addition to donating the jewelry and staff time for the Color Bar, Kendra Scott donates proceeds from the sale of MD Anderson hand and heart “give back charms” to support programs for pediatric patients at MD Anderson. The store also offers pop-up shops around the country and other philanthropic initiatives that give back.

Jefferson has been so inspired by the Kendra Scott team that she hopes to work with them when she completes treatment.

“I am supposed to be done with treatment in April and I’m going to go apply at the store in The Woodlands,” Jefferson said. “They have helped me feel better when I have been having my worst days, and I want to do that for other people.”