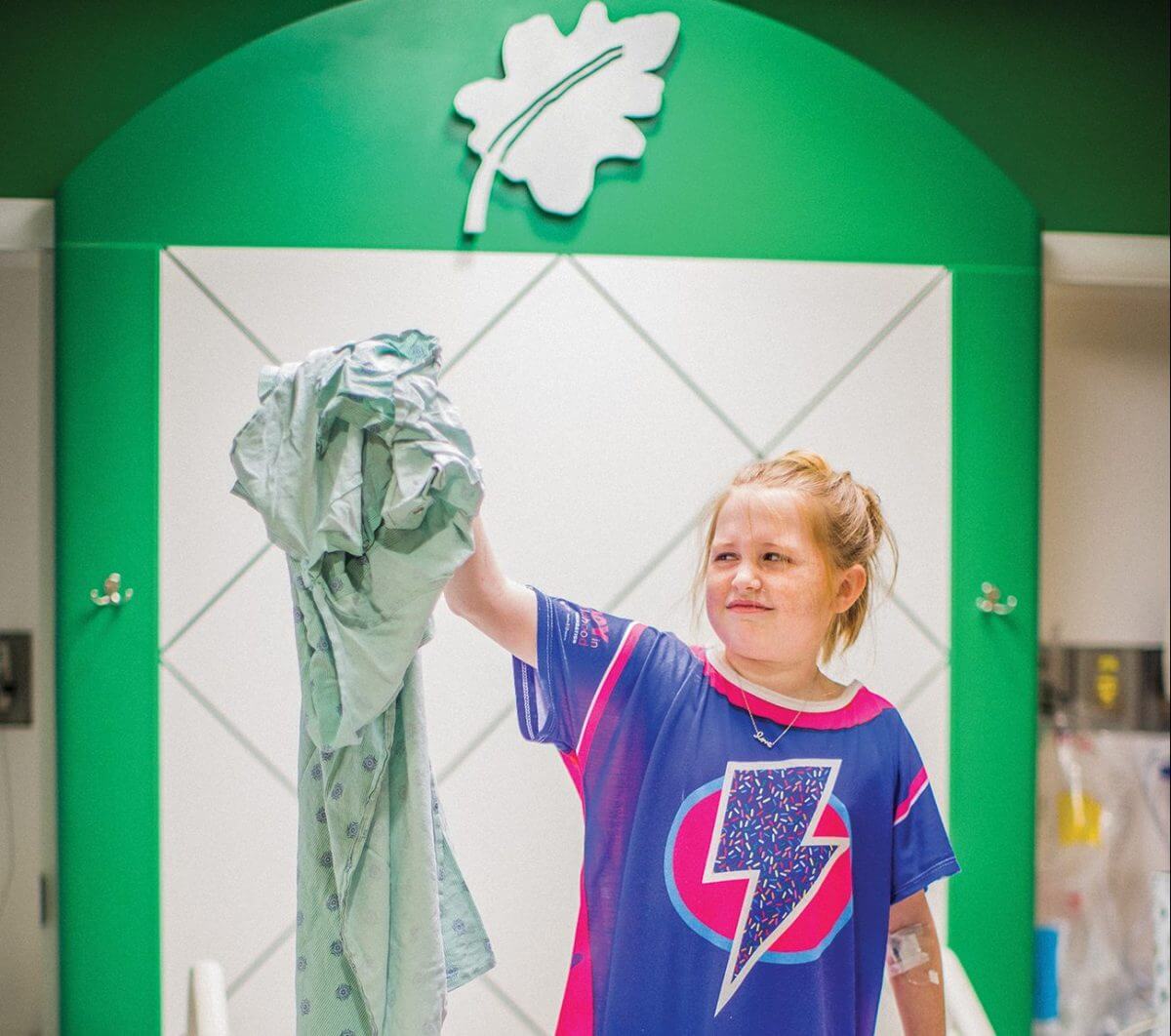 Sitting on the edge of her hospital bed surrounded by her best-loved stuffed animals, Evie Baxter looked comfortable as she contemplated her next move in the board game Life. Her reddish blonde hair was tied into a loose, messy ponytail, and her face, flush with freckles, was quick to smile. Instead of a conventional hospital gown, she wore a brightly-colored garment made of soft, T-shirt-like material. It was purple and pink and sported an image of a superhero lightning bolt covered in sprinkles. For Evie—an 11-year-old with common variable immunodeficiency—the kid-friendly gown had been a significant source of comfort during her hospital stay.

The gown was one of more than 3,000 donated to Children’s Memorial Hermann Hospital late last year by Starlight Children’s Foundation, which works to improve the experience of hospitalized children and their families across the U.S. through entertainment and distraction.

“Our mission is to provide moments of joy and comfort for kids who are in the hospital,” said Chris de Haan, Starlight’s senior vice president of communications and public relations. “We want to take a moment that is very difficult and stressful and full of anxiety and nervousness and transform it into a moment that preserves the wonder and the magic and the joy of childhood. Because every child deserves to experience that.”

Colorful, comfortable hospital gowns are just part of Starlight’s toolkit, which also includes donations of toys, stuffed animals, books, crafts and games; celebrity visits from actors, entertainers and athletes; virtual reality experiences that transport pediatric patients outside the hospital environment and into immersive and exotic adventures; as well as Starlight Fun Centers stocked with family-friendly video games, movies and other sources of entertainment.

Children’s Memorial Hermann Hospital has a Fun Center on every floor and is currently constructing a new Starlight Site playroom, and Texas Children’s Hospital offers 75 Fun Centers in their campuses across the Houston area.

“Texas Children’s Hospital saw the value of our program, and you can now walk onto any floor on any campus and you’ll find a Starlight Fun Center there,” said Samantha Martinez, director of programs for Starlight Children’s Foundation.

Founded 35 years ago, Starlight has touched the lives of more than 60 million children worldwide. Last year in the U.S. alone, the organization provided more than $2.5 million in Starlight Special Deliveries—including toys, crafting materials, Radio Flyer wagons and other items—that brought smiles to hundreds of thousands of hospitalized kids.

“Not only do we provide hospitals with tools for their patients, but we can also provide significant budget relief,” de Haan explained. “A lot of our hospital partners are nonprofits—budgets are tight, and it’s expensive to care for children—so to the extent that we’re able to provide resources that help reduce budget constraints, that’s an additional benefit.”

Starlight works closely with hospitals to identify their needs and offer programs that best service their populations, which is how the gown program originated. Launched in 2016, the program has already delivered more than 150,000 Starlight gowns to pediatric patients throughout the country. According to de Haan, Starlight’s goal is to “revolutionize” children’s hospital gowns, which are typically faded, uncomfortable and unattractive. By contrast, Starlight gowns are designed to be comfortable, colorful and fun to wear. Designs range from astronauts to princesses to veterinarians and artists, and, according to Evie, they are “super cute.”

“The gowns make such a difference for the kids when they’re in the hospital,” said Evie’s mother, Julie Baxter. “To have something that doesn’t look like a hospital item, it gives them a little more personality, a little more individuality.”

Starlight gowns are more practical, as well. They tie on the side rather than the back, which provides more coverage, and they have snaps on the sleeves for easier, less invasive access for IVs or chest ports.

In February, Starlight launched a Design-A-Gown contest and encouraged patients, as well as their families and friends, to submit a design for the next gown. As de Haan said, “Who better to design a gown for hospitalized kids than kids themselves?”

The foundation received more than 6,000 submissions and selected three finalists. Jack, age 6, who wanted to help his 7-month-old sister who was born with a congenital heart defect, designed a gown covered in hearts and glitter; 13-year-old Ava, a Girl Scout, and her brother Maxwell, 10, designed an out-of-this-world Starlight gown for their 6-month-old cousin who was diagnosed with a rare form of cancer; and Kimberly, 36, from San Luis Obispo County, California, dedicated her design—an elephant to symbolize strength—to her daughter, Violet, who suffers from three rare genetic conditions and faces numerous hospitalizations. Starlight asked the public to vote on their favorite design in late March and plans to donate at least 30,000 gowns featuring the winning image later this year.

“To see the smile on a child’s face when you put something into his or her hands as simple as a colorful gown, it’s phenomenal,” de Haan said. “We’ve seen kids who are stuck in hospital beds who feel terrible, they feel sick, and we’ve watched them put on a gown and within minutes they’re up and out of bed walking down the hallway like they’re the cat’s pajamas. It’s incredible that something so simple can be so transformative.”