A lot of needles may help restart a heart

A lot of needles may help restart a heart 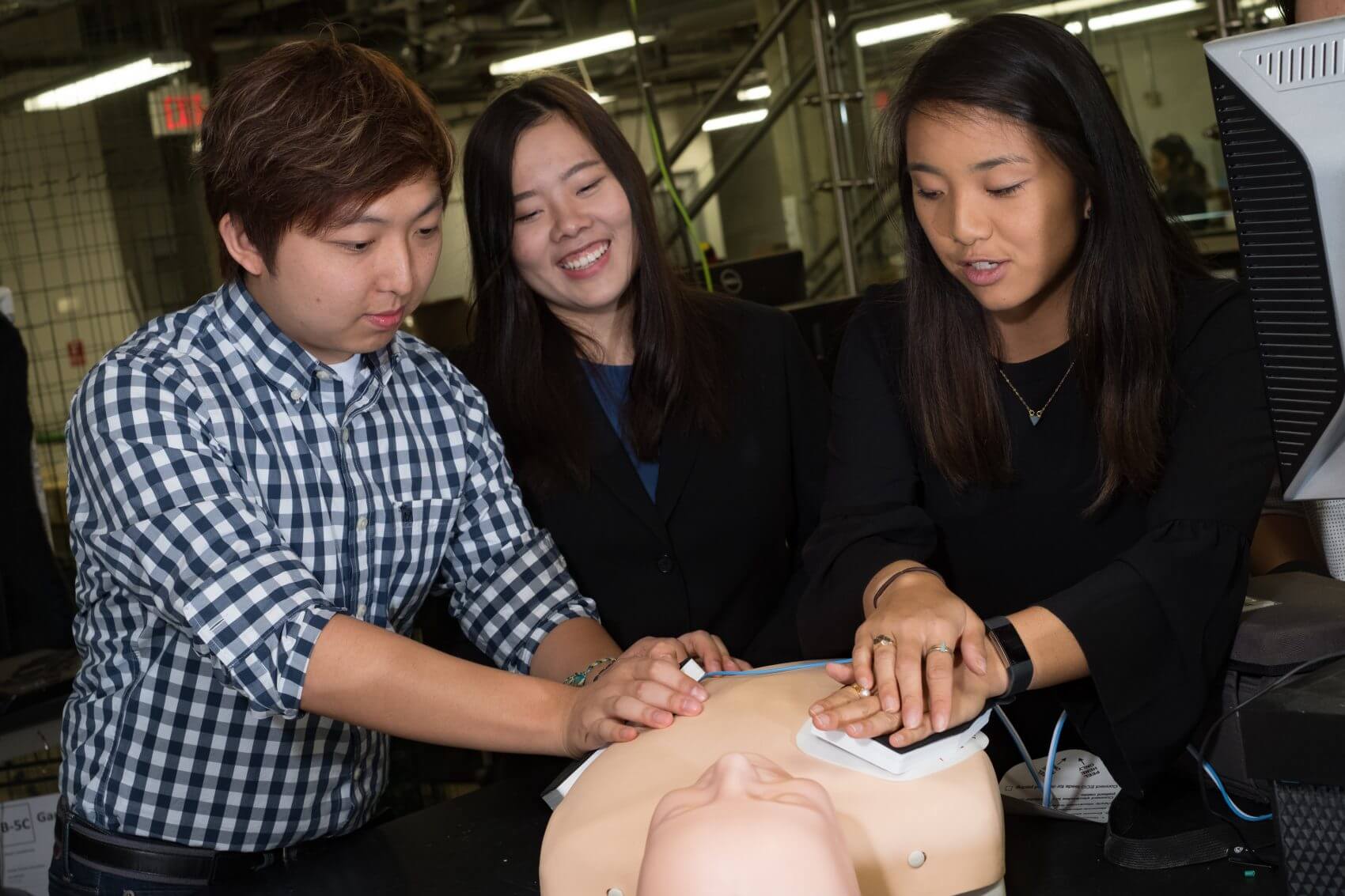 The skin presents a formidable barrier to life-saving defibrillators, but a team of students from Rice University believes it has found a way around that problem.

Or, more to the point, through.

The Zfib team of Rice senior bioengineering students created an add-on for automated external defibrillators – aka AEDs – that literally punches through the skin to help deliver a jolt to a person in cardiac arrest.

With the help of advisers Eric Richardson, a Rice bioengineering lecturer, and Dr. Mehdi Razavi, a cardiologist at Texas Heart Institute, the students developed a needle-laden pad that can be pressed through both a flexible AED pad and the skin to overcome the skin’s typical impedance of around 500 kilo ohms per square centimeter.

In practice, AED users would apply AED pads to the exposed skin of a patient’s chest and side, just as they are trained to do in thousands of AED/CPR classes taught in the U.S. each year. The needles would then be pressed through a pad and the patient’s skin to bloodlessly deliver a more effective shock.

By the team’s measurements, the add-ons reduce the skin’s impedance by 72 percent. That, in turn, should increase a patient’s chance of survival and reduce the odds that the patient will need multiple shocks.

“We looked into other ways to break the skin impedance, and some of the things we saw used chemicals or abrasion, like a sandpaper material,” team member Billy Jeon said.

“But in an emergency situation, you wouldn’t want to mess around with chemicals or something very complicated,” said Alexander Lu. “With needles, you just push straight down and it’s pretty effective.”

The team, which also includes Jamie Leong, Natalie Bolton and Sylvia Cai, was inspired by insulin-delivery patches that break through the skin with micro needles.

The Zfib add-on is a 3-D printed plastic frame with a rubber backing that allows the user to press 180 tiny needles into a patient’s chest without having to touch the needles. The needles collect current from the side of the pad that touches the skin and deliver it to the patient. Indicators on top of the device turn green when enough pressure is applied.

“These needles only go 1 to 2 millimeters into the skin, so it’s not very far,” Cai said. “They go just past the epidermis and into the dermis. There’s no blood drawn.”

The needles have to do their job without interfering with the AED’s ability to monitor the heart’s rhythm and decide whether a shock is necessary, according to the team. The current also has to be kept low enough to prevent burns.

“There are papers and clinical studies from the past 10 or 20 years about how people have gotten second- and third-degree burns from AED pads,” Lu said.

“We had to calculate how many needles we needed based on surface area,” Leong said. “We ran into the problem of putting so many needles on that it distributed the force and wouldn’t break the skin, like a bed of nails.”

Once they settled on 180 needles, the team evaluated their design with tests on artificial skin, an animal cadaver – and on Jeon.

“We actually hooked our device – really lightly! – onto Billy to see if it would pick up his rhythm, and it worked,” Leong said.

The team will show its invention at the annual George R. Brown School of Engineering Design Showcase today at Rice’s Tudor Fieldhouse. The event opens to the public at 4:30 p.m., with the winners of cash prizes announced at 6:30. As many as 80 teams are expected to compete this year.