Texas Children’s and Disney Partner on a New Hospital Experience

Texas Children’s and Disney Partner on a New Hospital Experience 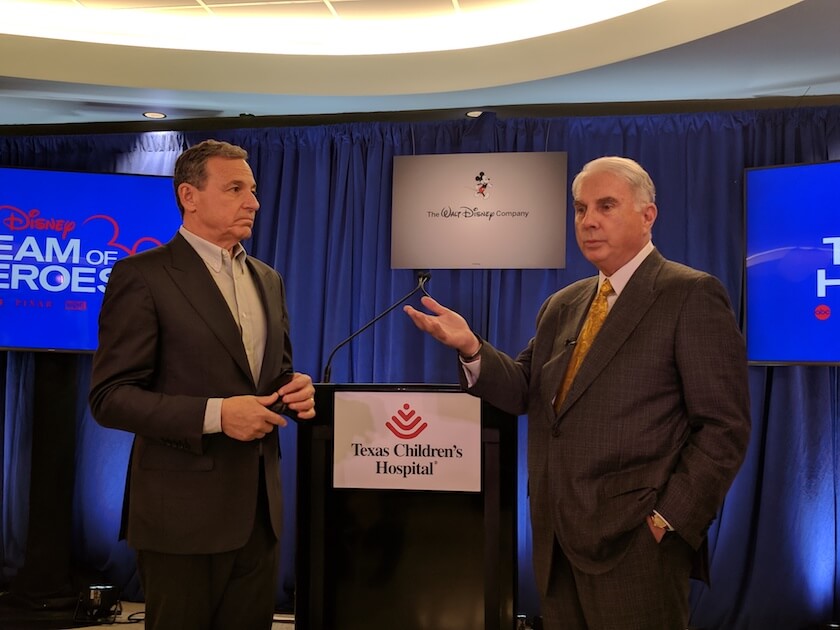 The patient experience at Texas Children’s Hospital (TCH) is about to become a little more magical.

The Walt Disney Company chairman and CEO Robert Iger and Texas Children’s Hospital president and CEO Mark Wallace debuted a new initiative that aims to bring Disney’s timeless stories to life within the walls of hospitals.

On Weds., March 7, against the backdrop of Texas Children’s new Legacy Tower lobby, Iger outlined a $100 million program that will roll out over five years at various children’s hospitals around the world.

But Texas Children’s will be the first hospital to work with Disney on the program.

Texas Children’s was a good fit to be the first for the initiative, Iger said, because the hospital is a global leader in pediatric care and the largest children’s hospital in the country.

“We are committed to making a difference and reinventing the experience in children’s hospitals all over the world,” Iger said. “Hospitals can be a scary place for children, and we want to use Disney resources for bringing hope, happiness and laughter to the patients who have to be there.”

Some of the new concepts, according to the Walt Disney Co., include:

Disney has put together a team of patient care experts, clinicians and  “imagineers” to explore the hospital experience and locate stress points for parents and patients.

“The partnership between Texas Children’s and Disney is a natural, magical fit,” Wallace said. “We have the ability to create a new paradigm in health care, and this is a shining example.”

While at Texas Children’s, Iger toured the Family Center, where some of Disney’s iconic friends were on hand to meet the patients. Wallace also presented Iger with a copy of an illustration Walt Disney made in 1952 after visiting Texas Children’s Hospital, when it was under construction.