JOEL COWLEY is slightly allergic to livestock. Nonetheless, since he first showed two lambs at a Wyoming fair as a young boy, Cowley has built a professional life around livestock and rodeo. Since 2013, he has served as president and CEO of the Houston Livestock Show and Rodeo, a nonprofit with an annual commitment of more than $26 million to scholarships, research and other educational programs. 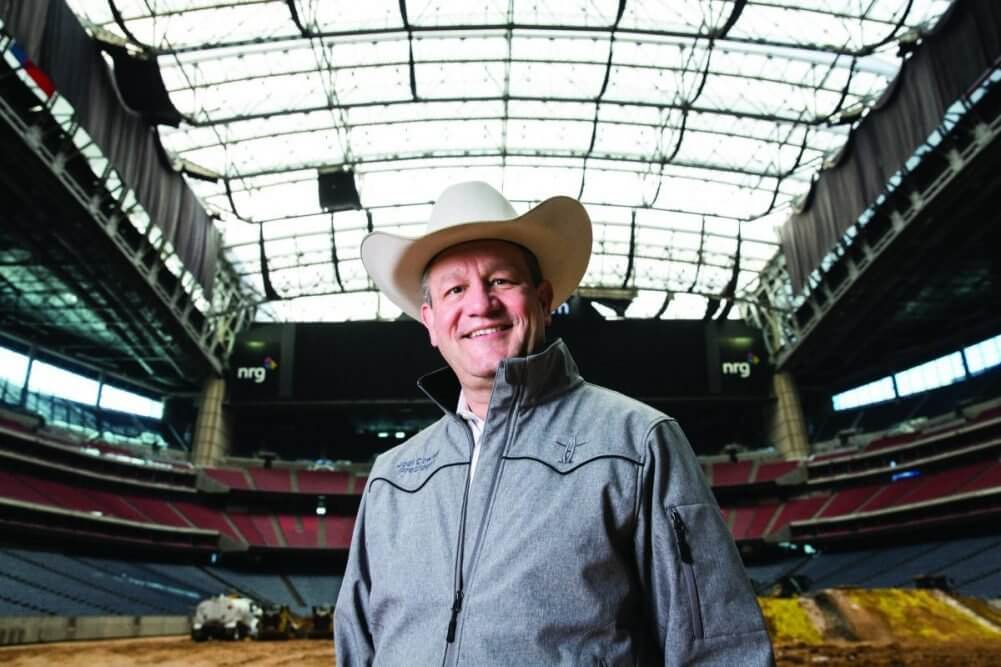 Q | You first visited the Houston Livestock Show and Rodeo in 1985. What was it like back then and how has it changed?A | When you grow up showing livestock, you know about the Houston Livestock Show and Rodeo. In 1985, I was a junior college student and I came here as a member of the junior college livestock judging team. At that time, the contest was still held in the Astrodome—which I had only seen on TV and in The Bad News Bears. I can remember pulling up on the grounds that morning—it was me and my teammates and coach in a station wagon. It was a really, really foggy morning and we drove up and, all of a sudden, the Astrodome just appeared. It was huge. I went down on the floor and judged the contest, but I had never seen a building like that.
Since then, the Houston Livestock Show and Rodeo has grown and moved into the NRG Center. This building is incredible. It is 1.4 million square feet; the main exhibit hall is 700,000 square feet.

Q | How did you get into livestock judging?
A | I have agriculture on both sides of my family and rodeo on my father’s side. The summer after my father died, I was 8 years old. My grandfather bought me two market lambs to show—Fred and Barney, named after characters from The Flintstones. My mother helped me raise and show them at the fair. They placed about fourth and fifth and they both qualified for the auction. I cried when I sold them, but when that check arrived a few months later, I thought, ‘I might want to do this again.’ Unfortunately, that December my mother passed away of breast cancer. At that point, my paternal grandparents brought my two brothers and me to Fort Collins, Colorado. My grandfather knew how valuable and how powerful these 4H programs were. He knew how much I loved showing those first two lambs while I was still in Wyoming, so he leased property just outside of town in Fort Collins so that my two brothers and I could raise sheep and show market lambs.

Believe it or not, I am slightly allergic to livestock. I’m allergic to the dander of the animals. When I was in high school, I would shear sheep and I would definitely notice my allergies when I was doing that. But through showing lambs, I got enough courage to go out for wool judging, which is where you actually evaluate which fleece is the best. After that, I finally went out for livestock judging—sheep, swine and cattle. You apply logic and critical thinking to rank the animals and then you have to stand in front of an expert and explain why you ranked the four steers or four pigs the way you did, which for me was absolutely terrifying. But I actually ended up being pretty good at it, and eventually became a member of a national champion 4H livestock judging team and then that led to a scholarship to junior college. Half of my undergraduate education was paid for through scholarship.

Q | How did you make your way back to Houston?
A | I graduated from Colorado State University with a bachelor’s in Animal Science, was on the collegiate livestock judging team there and then came to Texas A&M University to work on a master’s in Animal Science. When I came to Texas A&M and coached the livestock judging team, I would bring the judging team to the Houston Livestock Show and Rodeo—starting in 1988 through 1995. When my oldest daughter was born and I thought maybe I should get a job, Michigan State University was hiring. I went to work full-time as an extension beef cattle specialist, helping producers evaluate their herds from a production and a financial standpoint. I started working on a Ph.D., but I completed an MBA at Michigan State University. From there, I went to Certified Angus Beef in Ohio—the largest branded beef program in the world.

I still came back to every Houston Livestock Show and Rodeo when I was at Michigan State and Certified Angus Beef to help out judging contests or judge junior commercial steers. I have been to every Houston Livestock Show and Rodeo since 1988, either as a judging team coach, a judge, to help out with the judging team contests, or as an employee. In December of 2004, Mr. Leroy Shafer, who just recently retired from the Houston rodeo after 41 years, gave me a call. I flew down the day after Christmas in 2004 and agreed to come to work as the executive director of agricultural exhibits and competitions.

Q | What’s it like to watch a younger generation compete at the rodeo, and what do you hope these young people will gain from the experience?
A | I feel a very close connection with the show because of my background and seeing all of these young people who come here to compete—and knowing that was me. I am a product of the very programs and support that are offered by the Houston Livestock Show and Rodeo. This year, we have over 19,000 4H and FFA [Future Farmers of America] entries in a number of contests and competitions. I know the value that provided to me growing up, by building confidence, speaking skills and critical thinking skills.

Q | The rodeo is known for its devoted volunteers. How did that tradition start and how do volunteers support the mission of the rodeo?
A | In 1938, the Houston Fat Stock Show added the downtown parade, the souvenir program, the rodeo, the horse show and formal volunteer committees. There were certainly volunteers before that, but they were now formally added to sell tickets and exhibitor space and that’s really where it took off. The volunteer base grew as additional elements were added to the show. When I came here in 2005, we had 16,000 volunteers. Now we have over 33,000. Those volunteers serve different purposes. Each committee has its own mission that relates to the overall success of the show. Some are working committees that assist the general public—directing traffic, scanning tickets, driving trams and golf carts. We have outreach committees that make individuals aware of all the great things the show does, but they also raise money for scholarships. You have these committees pulling together that support every single area of the show.

Q | Many people come to the Houston Livestock Show and Rodeo for fun and entertainment, but the rodeo also educates visitors about agriculture. Why is that so important?
A | We are passionate about that because we cannot take agriculture for granted. Unfortunately, we kind of do. Hurricane Harvey was a great example of that. When you went in a store two days before the storm or four days after and you couldn’t find a loaf of bread or a gallon of milk—what if it were like that all the time?

But we just take for granted that food is going to be there and I think the reason we take it for granted is that Americans spend less than 10 percent of their disposable income on food—that’s the lowest percentage of any nation in the world. And that’s because our agriculture production system is so efficient. But when you take a look at the 7.4 billion people on the planet today and projections having that at 9.5 billion by the year 2050, and you factor in that we are going to have to produce more food with the same amount of land, that’s going to take technology. I know that scares some people, but there is a way to sustainably and wholesomely feed the planet using technology.

Q | Has the Houston Livestock Show and Rodeo always been such a star-studded event?
A | The first show that was held in 1932, according to most records, sounded like it was a cattle show. And there were impromptu rodeos. I came across a newspaper clipping for an ad featuring a vaudeville performer—singing and dancing and what not. The organizers knew early on what value entertainment had. It wasn’t until 1942 that we really hit upon our current format of combining a star entertainer with a rodeo. That year we had Gene Autry, ‘The Singing Cowboy.’ He was the very first star entertainer to perform here. That was significant for two reasons. One, he was an incredible star at that time … so he sold out his shows. But he was also a rodeo stock contractor, so he gave the show,which was really struggling financially at that time, a really good deal on the rodeo stock—the bulls and the horses that are used in the rodeo. I pulled the financials, and the gross revenue between 1941 and 1942 grew 40 percent because of Gene Autry. From that point on, we have paired rodeo with star entertainers to draw people in and sell tickets.

Q | In light of mass shootings around the world, how is the rodeo preparing for a mass trauma event and what would you say to those who may be anxious to attend?
A | We work very closely with the police department and the Harris County Sheriff’s Office and the Houston FBI, as well. They are constantly monitoring any threat assessments for any direct threats, and then we consult with them on our grounds security. We have made some enhancements this year compared to last year, primarily in the area of fencing around our carnival to make sure that it is more secure. We have added personnel, we have added lighting. The sheriff’s office provides “eye in the sky,” where officers are elevated to do surveillance.

In the world that we live in today, we all have to think about safety before we attend. But on the other side of that, we still need to live our lives and go out and enjoy interacting within our communities. It is really a balance, I think. When it gets right down to it, we are in the experience business. If we provide everyone who comes to our grounds with a great experience, we will be successful—whether they are a livestock exhibitor, a rodeo contestant, a star entertainer or the general public. But you can’t have a great experience unless you feel safe and secure in the environment, so that is an absolute priority for us.

Q | What will the Houston Livestock Show and Rodeo look like 20 or 30 years from now?
A | Because of the tremendous support both from the volunteer standpoint and the community at large, the show just has tremendous potential. We tend to outgrow facilities as soon as they are completed because of the demand for the product and for the experience. That’s our biggest challenge. We are constantly looking at ways to add space and program space more effectively for those who come to the grounds. Last fall, we purchased the remainder of the AstroWorld property, so now we own 102 acres across 610. We did that because, looking forward, we want to grow our impact for those who come to our grounds to be entertained and to be exposed to agriculture. But we also want to grow our educational impact. There is additional need out there for educational support. If we are able to grow our event while still providing a great experience, we will be able to grow our support of education and agriculture.

Joel Cowley was interviewed by Pulse writer Britni N. Riley. This interview was edited for clarity and length.