Hypnosis in the Operating Room

Doctors and researchers at MD Anderson are exploring hypnosedation to manage pain and anxiety during certain breast cancer surgeries.

Hypnosis in the Operating Room 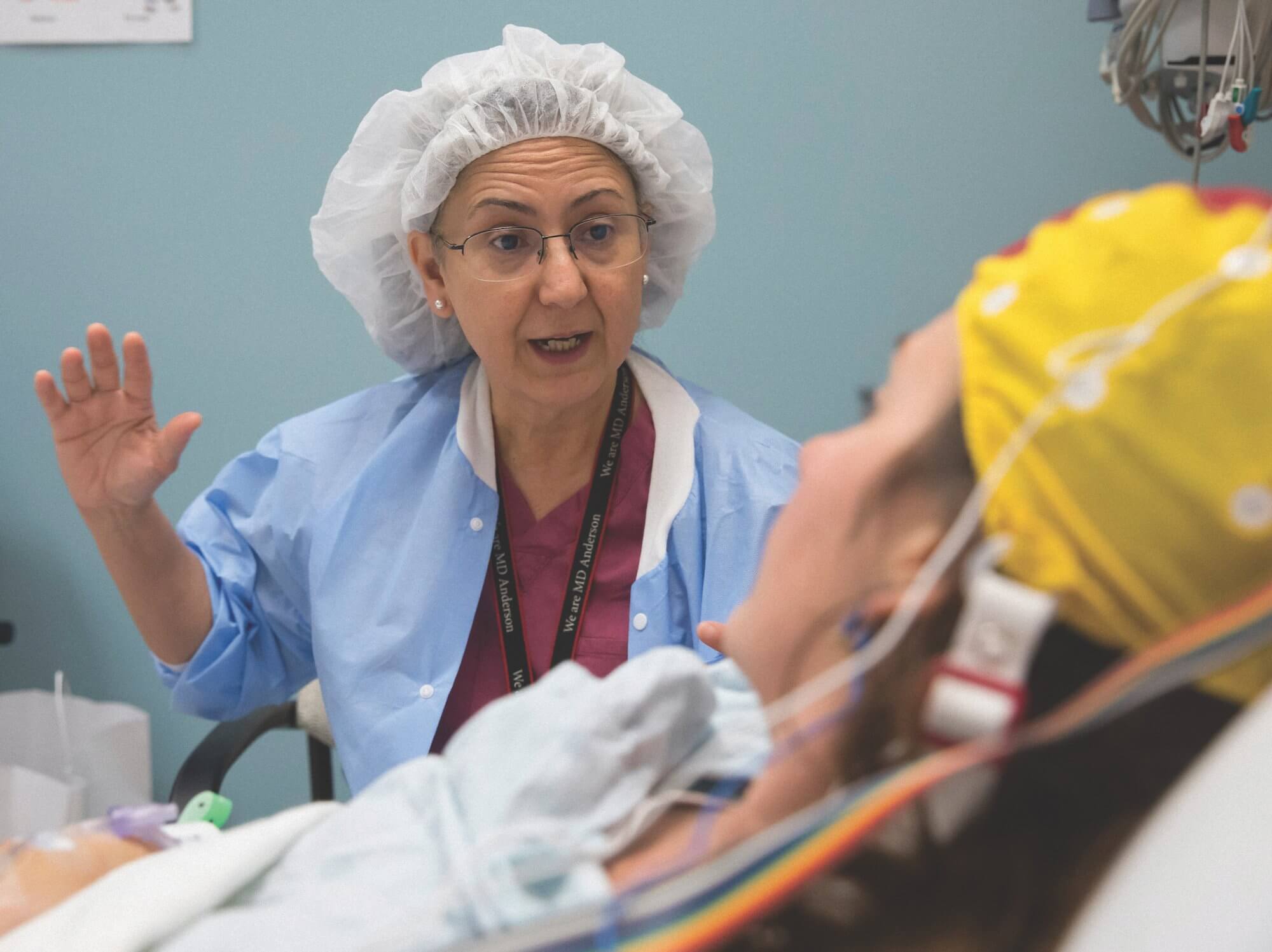 When Beverly Levinson’s doctor noticed two unusual spots on her dense breasts, she was sent to The University of Texas MD Anderson Cancer Center for a lumpectomy—a surgical procedure to remove abnormal or cancerous tissue along with a small portion of the surrounding healthy tissue.

Levinson, 64, wasn’t as concerned about the surgery as she was about undergoing general anesthesia. She had received general anesthesia for previous surgeries, but because of her temporomandibular joint (TMJ) disorder, she suffered severe jaw pain from opening her mouth wide enough for the breathing tube to be inserted down her throat.

Luckily, an unconventional solution presented itself to Levinson. Her surgeon approached her about an ongoing clinical trial that would allow her to avoid general anesthesia by using hypnosis. Levinson, who had been hypnotized for jaw pain years ago, immediately jumped at the opportunity.

“In my eyes, I had nothing to lose,” Levinson said. “I could try something new or I could go the old-fashioned way. I’m the middle child. I always try new things. That’s my personality.”

Led by Lorenzo Cohen, Ph.D., director of the Integrative Medicine Program at MD Anderson, the ongoing clinical trial aims to determine whether or not a method of deep relaxation, called hypnosedation, is safe and effective for patients with stage 0/1 breast cancer who are undergoing lumpectomies with or without sentinel lymph node dissections. The study, still in its pilot phase, will examine 50 patients who are randomly selected to receive either general anesthesia or a combination of local anesthesia and hypnosedation before and during surgery.

In both cases, a patient has an intravenous line placed in her arm and an anesthesiologist is present to administer a cocktail of drugs used to put her under. For patients receiving hypnosis, the anesthesiologist monitors their vitals, calculates the appropriate dose of local anesthetic medication, administers medication for pain and nausea and stands by to convert to general anesthesia if the patient experiences any discomfort.

“Over the past couple of decades there is a very solid evidence base that incorporating hypnosis during invasive conscious sedation medical procedures reduces anxiety, helps to control pain, decreases recovery time, and helps lower medical costs,” Cohen said.

The practice of hypnosis, in one form or another, has been around for centuries. But it wasn’t until the mid-19th century that it came to be defined as a kind of “nervous sleep” that could alleviate anxiety or pain during medical procedures.

In the 1840s, Scottish neurosurgeon James Braid developed a technique of deep relaxation and visual fixation to guide patients into a trance and help alleviate their pain. He coined the term “hypnosis” and defined it as “the induction of a habit of abstraction or mental concentration, in which … the powers of the mind are so much engrossed with a single idea or train of thought, as … to render the individual unconscious of, or indifferently conscious to, all other ideas, impressions, or trains of thought.”

Although hypnosis is often associated with parlor tricks and stage magicians, the practice itself has been used clinically to address several conditions, including smoking, anxiety and overeating. For Levinson, it was a great option. A week before surgery, Levinson met with Rosalinda Engle, a mind-body specialist at MD Anderson Cancer Center who would perform the hypnosedation, in a small conference room in the hospital.

“Do you have a place where you feel really comfortable and at ease?” Engle asked Levinson in her soothing, mellifluous voice. “It could be your grandmother’s house. It could be a vacation you’ve enjoyed, a vacation spot. It could be anywhere, any place in nature. Close your eyes and call that up.”

As Levinson focused on the task, Engle continued to offer instruction.

“Breathe in deeply. Experience your breath from the tip of your nose. Feel as your breath moves through your body. Imagine breathing into the palm of your hands. Now exhale. Breathe out through your fingers, the soles of your feet, your toes. Relax.”

Slowly but surely, Engle lulled Levinson into a state of deep relaxation.

“I felt very, very safe,” Levinson said, when it was over. “It was like [going] into someone’s house where they’re baking a cake. It smells good, and they welcome you in. You just have a warm feeling.”

Engle guided Levinson through what to expect on the day of the surgery. The room would be sterile, with five or six people at hand. The lights would be bright. Engle would sit beside her throughout the procedure to keep her calm and relaxed.

“My sole job is to sit at the head of the bed and focus on the patient,” Engle said. “Any changes to breathing patterns [or] facial muscles will alert me that I need to check in. Periodically, I’ll ask the patient, ‘How’s your comfort level?’”

On the day of the surgery, doctors injected local anesthetics— lidocaine and bupivacaine—to numb Levinson’s right breast and made a 1-inch incision to remove some of the tissue. As promised, Engle sat next to Levinson for the duration of the surgery, helping her maintain a state of deep relaxation.

“I didn’t feel anything,” Levinson said. “You’re in a calm state. You’re in a safe state of mind. You’re being reassured. It was great.”

Throughout the surgery, Levinson recalled feeling pressure on her breast as the surgeon operated, but said it didn’t hurt any worse than getting a filling at the dentist.

Less than an hour after her surgery was complete, Levinson was out of bed, dressed and walking around. She skirted the unpleasant side effects of general anesthesia, recovered faster and didn’t require any post-operative painkillers.

For hypnosedation to work, Engle said, the patient must be receptive to it.

“All hypnosis is self-hypnosis,” Engle said. “You’ll go as deep into this trance state as you are willing to allow yourself to go.”

Engle points to shifts in attention and consciousness that people commonly experience throughout the day. Ordinary moments—such as zoning out while driving or becoming so engrossed in a conversation that you’re able to block out surrounding noise—are examples of how the mind can tune out distractions.

“Pointing out these everyday shifts and our capacity for absorption is important to let the patients know they are in control and driving this experience,” Engle said. “They can train themselves to be as relaxed and calm as possible. They can guide themselves. They can walk through this experience with surgery and take it throughout the treatment process, the whole continuum of cancer care.”

While general anesthesia is very safe for most people, it can have unpleasant side effects. The most common are temporary nausea and vomiting, dry mouth, a sore throat and grogginess. Older patients who receive general anesthesia are more likely to experience longer-term cognitive and memory impairments, a condition called post-operative cognitive dysfunction (POCD) that can last anywhere from a few days to a few months. Those with a history of POCD have a higher risk of experiencing the condition again with repeated anesthetic.

“[Hypnosedation] is a nice alternative,” said Elizabeth Rebello, M.D., associate professor in the department of anesthesiology and perioperative medicine at MD Anderson. “The patient doesn’t require an extended period of time in the recovery room. They’re able to go on with the rest of their life.”

According to Cohen, more than 34 clinical trials and numerous papers published in scientific journals have shown that hypnosedation works. But he says there is still some doubt among his colleagues.

“Although a physician may think, ‘I don’t believe in hypnosis,’ that is a scientifically unsound statement. Science is not about personal belief. It’s about evidence,” Cohen said. “Your religious practices are part of a belief system. Science is evidence-based. Unfortunately, there are some people who approach science from a belief perspective, as well, and they’re wrong.”

Most surgeons were initially reluctant to participate in the clinical trial, said Dalliah M. Black, M.D., a breast surgical oncologist at MD Anderson. Because the standard approach at MD Anderson is to use general anesthesia for surgeries large and small, most surgeons are accustomed to having their patient sleep throughout every procedure.

“Surgeon interest was very slow up front, but I would offer them to come in to watch my cases,” Black said. “Many colleagues have been so surprised.”

Using hypnosedation, patients like Levinson can gain some semblance of control during an otherwise stressful experience.

“It’s amazing how complex we are as humans and how complex the mind is. A lot of times, it’s mind over matter,” Black said. “Hypnosedation is a way we’ve applied mind over matter to a situation in the operating room for a specific population of the patients here. That mental fortitude and the strength that we have, that has to be carried through and has better outcomes if we use that path throughout our cancer care.”

No matter how effective the clinical trial shows hypnosedation to be for surgeries, Rebello stressed that hypnosedation will not become a new standard approach for pain management.