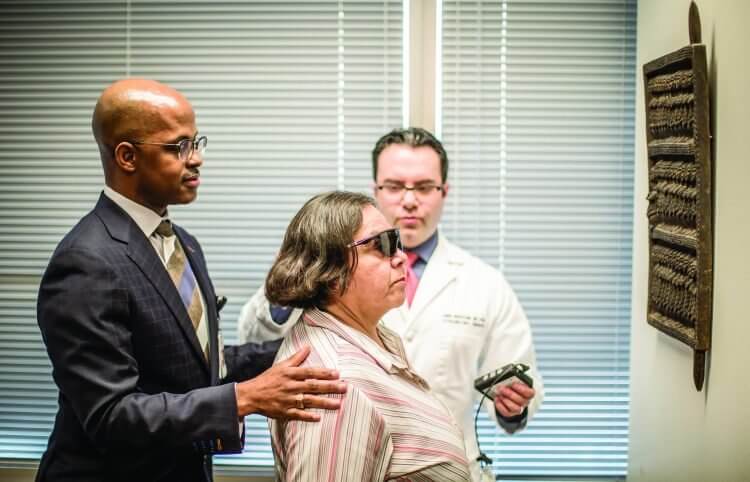 Lidia Lopez could not sleep the night before doctors activated her bionic eye.

The 61-year-old had been losing her vision for decades. Retinitis pigmentosa, a genetic disorder that causes a breakdown of cells in the retina, had shuttered her eyesight and independence.

But Lopez, the first patient in Houston to receive a bionic eye, hoped that would change on Feb. 12.

One month after doctors implanted a tiny Argus II retinal prosthetic in her left eye, Lopez arrived at the Robert Cizik Eye Clinic to have her vision activated. In a conference room crowded with doctors, family, friends, media and a few employees from Second Sight—the company that makes the Argus II—Lopez donned a pair of special glasses outfitted with a miniature video camera.

“Está bien!” said the El Salvadoran-born Lopez, who spoke and answered questions in English and Spanish.

(Watch a one-minute video of Lopez using the Argus II.)

The camera in Lopez’s glasses sends images through transducers to the implant in her eye and simulates vision, essentially bypassing her degenerated retina and using the functioning parts of her eye to connect to her brain. Going forward, Lopez will carry a small video processing unit with her—small enough to attach to a belt—that connects to the camera.

Lopez is well aware that her bionic eye will not offer 20/20 vision. She will not be able to read or drive, but she will be able to distinguish light from dark and make out the shapes and outlines of people and objects. She will learn to see in a new way.

The Texas Medical Center doctors who implanted the chip in Lopez’s eye on Jan. 10, Garvin Davis, M.D., MPH, and Amir Mohsenin, M.D., Ph.D., are the only physicians in the region authorized to implant the Argus II prosthetic. On the day Lopez’s eye was activated, they explained that the chip in her eye is outfitted with 60 electrodes. The camera signals stimulate this tiny array, which, in turn, helps Lopez see.

“She has to move her head from side to side in order to scan images,” said Mohsenin, a University of Texas Health Science Center at Houston (UTHealth) ophthalmologist affiliated with Memorial Hermann and the Cizik Eye Clinic. “The image of what she sees is actually quite small.”

Imagine watching black and white images on a cell phone placed directly in front of your field of vision. That’s essentially the size of the array that Lopez sees.

Lopez sat straight up in her chair and smiled as the doctors and Second Sight employees turned on her vision. Davis, who was wearing a dark suit, and Mohsenin, wearing a white coat, encouraged her to try and see the difference in their jackets. She struggled a little, but could make out the contrast between light and dark.

“She will slowly get better at this and learn what she is seeing,” said Davis, also a McGovern Medical School at UTHealth ophthalmologist affiliated with Memorial Hermann and the Cizik Eye Clinic. “Some of the best patients can sort laundry—light and dark. Some patients can do archery.”

In Spanish, Lopez told the crowd what she hoped to gain with this new system of sight.

“I want independence,” she said. “To work. To walk in the park.”

The Argus II is the only retinal prosthesis ever approved by the U.S. Food & Drug Administration. It costs about $150,000, but Davis and Mohsenin said Lopez’s insurance would cover it.

More than 280 patients worldwide have been outfitted with the Argus II, including more than 120 patients in the U.S. and Canada.

Mohsenin and Davis hope to implant four or five bionic eyes a year. The waiting list to receive the Argus II, they said, is significant. Patients have been calling Second Sight to find out where they can get the surgery.

For Lopez, the real effort begins now that her eye has healed from the implant and her vision has been turned on. She will work directly with computer programmers and occupational therapists to learn to interpret the visual stimuli that she is receiving. With software upgrades, her vision will improve, as well.

“We expect her to be able to tell high-contrast shapes in the future,” Davis said. “Her feedback is essential to the development of the device.”

“With time, we’d like her to be able to navigate, to potentially make out a door,” Mohsenin added. “Some patients say they can make out people in their family. The range of results is large. Many gain more benefit than what is promised in the surgery.”

Carlos Lopez, 30, said his mother started to lose her vision before he was born.

“I remember her from being able to distinguish shapes and stuff and know who was there, to basically not knowing who was in the room,” he said. “She had it and then she lost it. So she knows what she’s been missing out on. Now that she’s regained some sort of vision, it’s nothing short of a miracle.”

He said his mother wants to be able to move around on her own, to spend time in nature. For years, she has been confined to her home unless a family member is with her.

In the conference room, Lidia Lopez looked determined to make the most of this new way of seeing.