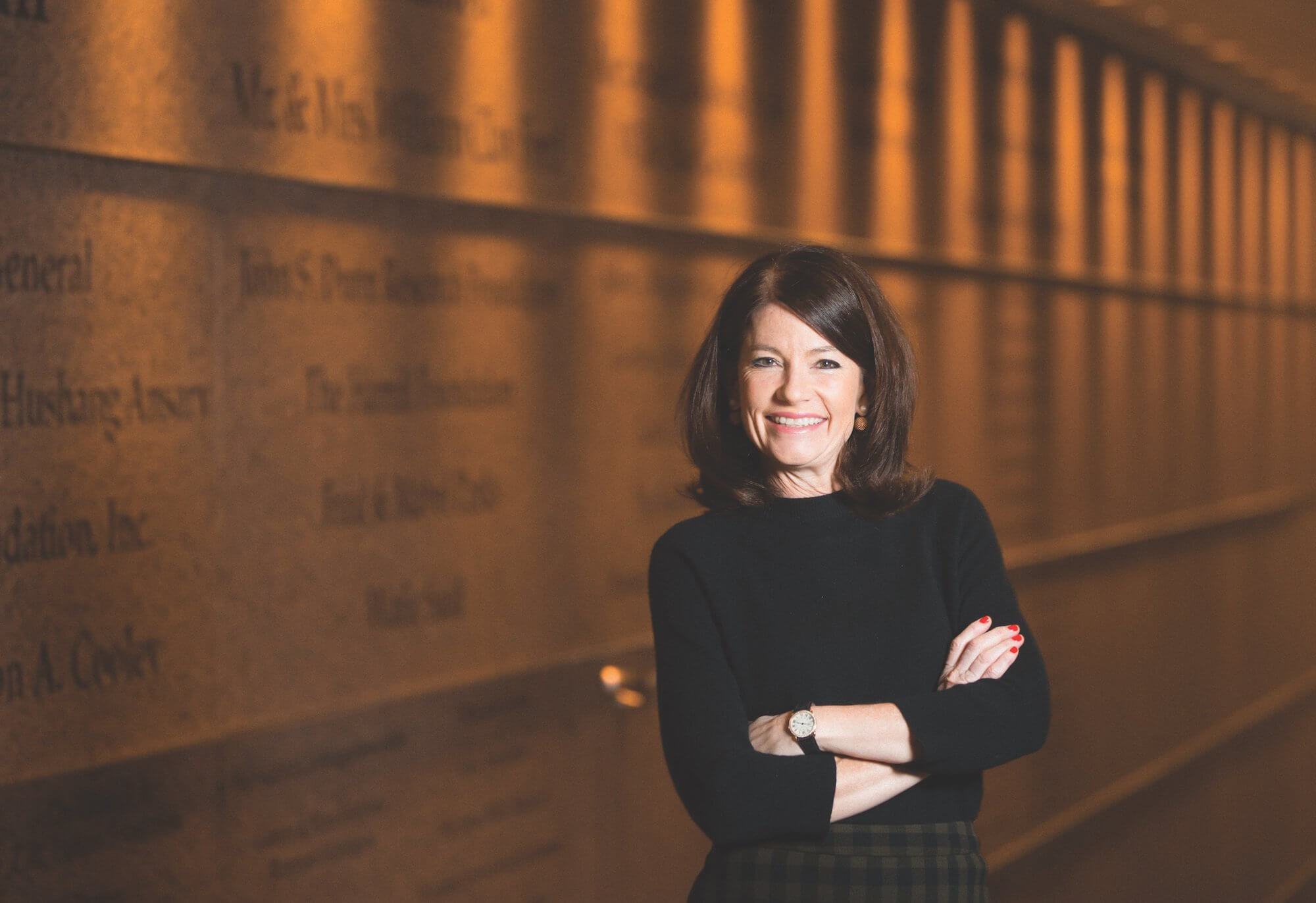 STEPHANIE COULTER, M.D., directs the Center for Women’s Heart and Vascular Health at Texas Heart Institute. The high-energy Louisiana native—who didn’t always want to be a cardiologist—is committed to understanding how cardiac disease affects women and developing the best treatments and care for female patients.

Q | You’ve dedicated your career to the often overlooked and surprising gender differences in cardiovascular disease. Heart disease remains the No. 1 cause of death in both men and women in the country, but there’s a limited understanding as to why it affects men and women differently. What has your research shown?
A | We’ve known for a long time that women suffer at a greater risk of death from any cardiac impairment. I mean, double. When I started at the women’s center, we were really interested in what was the ideology of that disparity. We went and looked at the database here at Texas Heart [Institute], and we looked at all the people that had established vascular disease. We looked at what was the difference among women. Is there a racial disparity? Some of the risk factors are different in different groups.

We looked at our database and we found that basically all women had a similar outcome independent of what their race was. But by gender, compared to men, they had lower outcomes.

Q | Why is that?
A | In fact, women’s overall risk is the same as men. But it’s delayed because women, before they hit menopause, are relatively protected from the burden of coronary disease, which is really the main killer of men and women in our society still.

Then, after age 50, or 52 to 53, when women go through menopause, their risks really catch up with them. Their risk factors go up two to four times. After that, women and men had similar outcomes. Women outlive men, but they catch up and end up with a slightly higher risk of dying of heart disease just because they live longer. Burden of heart disease accumulates over time.

Q | Why is it important for the future of cardiovascular health to study these nuanced differences?
A | Because the dirt is always in the details. If you want to make a major advance in preventing, treating and stopping disease mortality, you’ve got to get to people younger in life. You can’t wait until they show up in your ER with a heart attack or a stroke because, by then, it’s too late. … That has been a major focus for the American Heart Association and the American College of Cardiology for the last 20 years, really since Laura Bush’s Red Dress Project, which really made a big impact on cardiovascular mortality. In fact, if you address the big problems, which are smoking, high blood pressure, diabetes, high cholesterol … If you attack those risk factors early enough, and control them, you completely prevent disease.

Q | When did you know you wanted to pursue a career in medicine?
A | I knew from when I was a youngster … that I didn’t want to stay at home. I grew up in Louisiana because my dad worked for Exxon, and all the mothers were your typical Southern women who stayed home with their children.

I remember, by the time I was 11 or so, I didn’t see a lot of homology between them and me. I developed this unique sense of, ‘It’s okay to be different.’ I internalized that at a young age and told myself, ‘It’s okay that I don’t really want the same things that another person wants.’ I just got used to being a little bit different. That’s the heart of it. People who have to stake out and do something unique have to be okay with that. Otherwise, they’re not going to do a great job.

I graduated from high school in 1983. I was coming of age in a period when women were getting more opportunities, but there was a serious glass ceiling back then. I liked the structure that medicine provided. It was very much a meritocracy. I chose well, but I learned to trust that I was different and I learned to trust my internal compass, big time. When something doesn’t feel right to me, I know it. I learned not to follow the hooves.

I didn’t know a single doctor. I’d never spent any time in any medical facility before I became one. I just knew that it was filled with science, and I liked figuring things out. It had the structure to it where you couldn’t be boxed out. I was willing to work. Once you’re in the medical system, it’s a meritocracy. You have to make the right grades. Can you do that? That’s up to you. You take a test, you study. It’s up to you. I liked that. 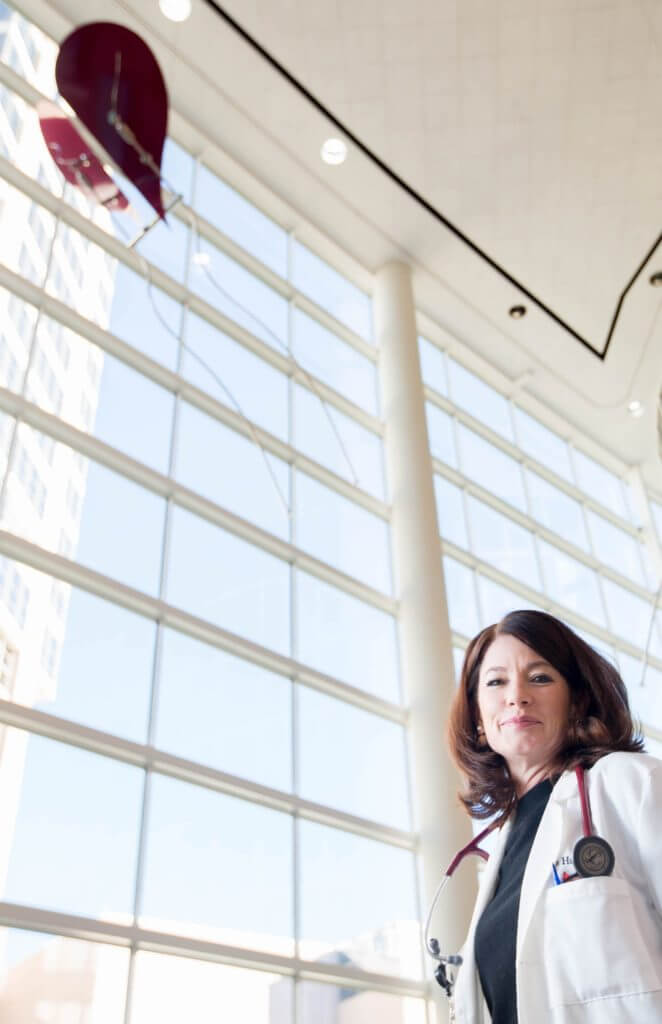 Q | Once you were in medicine, how long did it take you to determine that you wanted to be a cardiologist?
A | I always took the trail that had the most forks because I never knew what I was going to like and I always liked everything. If I got to the end of a road and there was a fork, I always took the next fork that had the most options. And I didn’t always follow the grain.

Along these forks in the road, you have to decide what fits for you. What fits for you may not fit for the next guy. And sometimes I would try those hats on, and then I would go, ‘No, that hat didn’t fit for me.’

Even when I was a young doctor, I didn’t want to be a cardiologist. In fact, I traded away a cardiology elective when I was a third-year medical student because I was like, ‘No, those guys are cowboys. I’m not like that.’ I never chose the thing that everybody said you should do.

I became an internal medicine resident, and then [cardiology] didn’t look so scary. It was more cerebral. I knew enough to think about it in a different way. It wasn’t just guys dying and people rushing them to surgery or to the [catheter] lab. There was a lot more intricacy to the physiology. That was very entertaining to me.

Q | What is the best part of cardiology?
A | You get to take care of patients, and you make them better. We really have transformed [cardiovascular] disease in 20 years, 30 years. I’ve been like a voyeur of that. Since I started my training [as] a cardiology fellow in 1994, the world has changed. We make a huge difference.

I want to be in a field where we have optimism. I’m optimistic, and I think that you can be optimistic in many fields, but if all your patients are dying it’s going to be tough to stay optimistic. It’s really gratifying when you take somebody from the brink and you can transform them.

Q | Many specialties in medicine are still male-dominated. According to a recent study by the Association of American Medical Colleges, nearly 87 percent of active physicians specializing in cardiovascular disease are men.
A | Part of the problem is that we need to encourage women to pursue longer training programs. Sub-specialists require a longer training program, and the training of those sub-specialties interferes in the child-bearing years.

Q | Yet you managed to do both. You have an impressive career as a cardiologist, as well as a husband and two college-age daughters.
A | You need help and need to be able to afford [childcare]. And you have to be a little bit fearless. I was frantic about something once, and my mom told me, ‘You can’t have it all at one time, but it doesn’t mean you can’t have it all.’ It was a really good piece of advice because it just depends on how long your time horizon is. I feel like I really just got good enough and wise enough to juggle many things. But in order to juggle many things, you have to have really, really good people around you.

[Some young girls] are very worried about finding the right husband, or finding the right match. I’m in full agreement with that because, who you marry, if you’re going to be a working and contributing woman, then, the very best way to sack yourself at the beginning is to marry the wrong guy. You need a guy who’s going to contribute, help out, understand and not be threatened by whatever you’re doing.

Q | What is your advice for young girls pursuing STEM careers?
A | One, pursue the things that you’re good at. If you’re good at something, it’s going to be easier for you to excel at it. Two, find a mentor. I think, in society, we need to provide better mentoring to girls and women who are good at math or science.

You just can’t give up. There are things that are important in life, and they’re worth pursuing. Remember, life is long. You don’t have to have everything at one time, especially as a woman. Life has seasons. You can’t have it all at one time, but that doesn’t mean can’t have it all. You just have to space it out.

Q | What are some simple things people can do to incorporate more physical activity and better eating habits into their daily life?
A | If you cannot exercise during the day because you have no time, and I believe that’s true, take the stairs. Park far away from your office. Get up and walk around as much as you can. Then, it becomes about what you put in your body. If you can’t exercise your body regularly, then you need to be very cognizant of what you put in, which means count your calories, eat non-processed foods, healthy foods, fruits and grains.

Q | You lead several research initiatives at Texas Heart Institute and advocate for more public education about heart health. What is your main goal for 2018 in this realm of cardiovascular health care and research?
A | I want to involve my young fellows more in research and investigative processes in the hospital for clinical research. The more they get involved in research, the more we move the field forward, the more they learn. They take that information with them when they leave. Because remember, we’re training the next generation of cardiovascular specialists here. We have a big-time responsibility. I heed that responsibility really carefully.