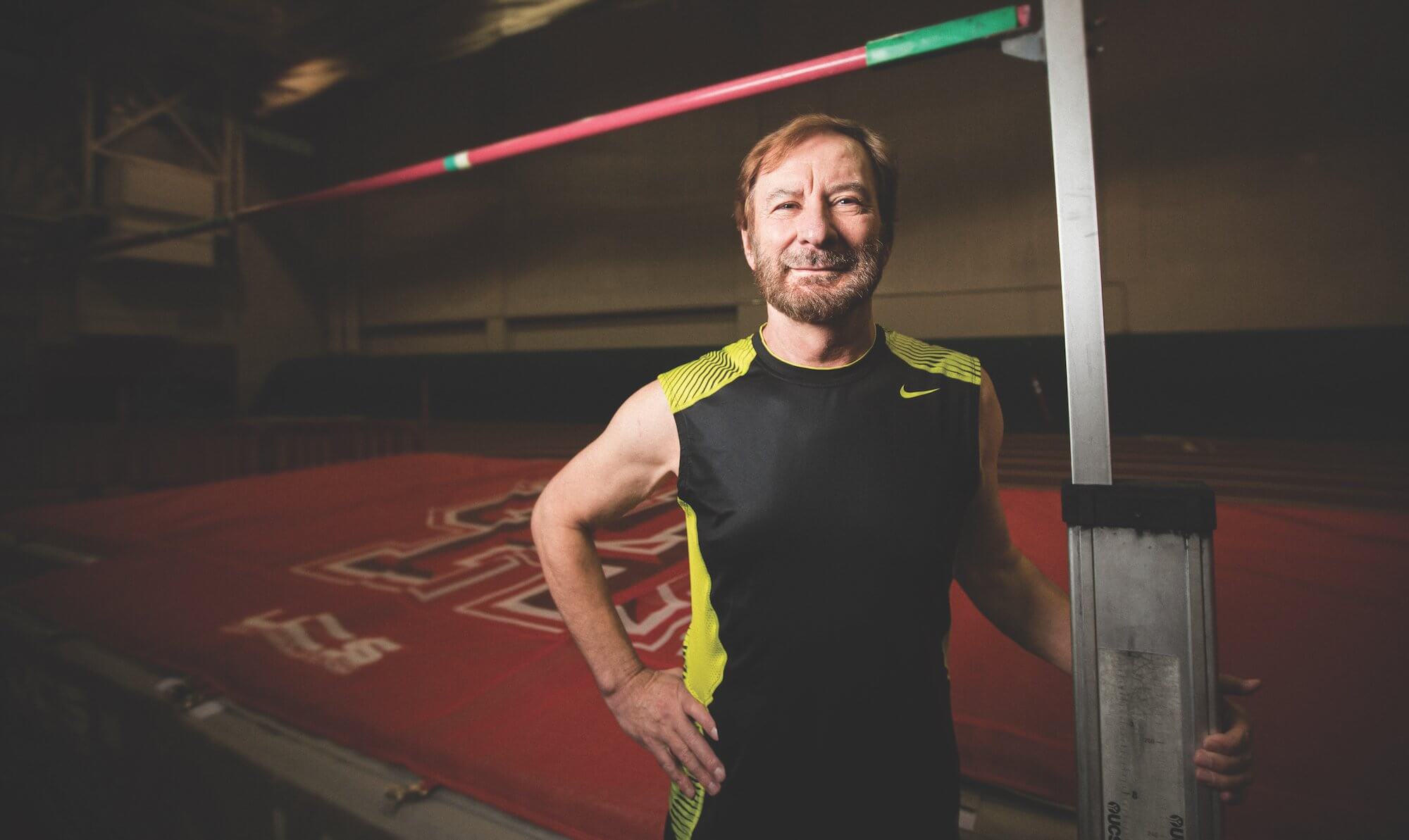 For the past 20 years, Jamrich has served as a molecular and cell biologist at Baylor College of Medicine, where he studies a rare genetic mutation that causes animals—including humans—to be born without eyes.

“Our claim to fame is that we have identified the key gene in eye formation,” Jamrich said. “This gene is also expressed in a part of the brain called ventromedial hypothalamus—this part of our brain that regulates our body temperature and oxygen level. … If you don’t have ventromedial hypothalamus, typically, you would die even in utero, but there are some minor mutations in which case the brain is just fine but the eyes are lacking.”

Outside the lab, Jamrich, 67, has pushed himself to his physical limit and found fame as an elite high jumper.

Jamrich began high jumping when he was 14 years old in his home country of Czechoslovakia, now a part of Slovakia. When a friend’s father—a track and field enthusiast—built a high jump pit and introduced the boys to the sport, he was hooked.

He later joined the track and field team and trained to be a hurdler, but after his coaches noticed that he leapt too high over the hurdles and lost too much time in the air, he decided to redirect his natural skill and pursue the high jump instead.

Jamrich later immigrated to Germany at the age of 20. While he pursued his Ph.D. at Heidelberg University, he continued to compete in the high jump at the elite level, earning the collegiate champion title and placing first in the International British Track and Field Championships in 1972.

During the apex of his athletic career in Germany, Jamrich competed twice a week for eight years. In 1976, he hit his all-time career best at 2.15 meters (7.05 feet). But when he turned 28, his coaches told him he was too old to compete any further.

Like many athletes who retire, Jamrich turned to coaching a small group of high jumpers. His biggest success was coaching a British high jumper who competed in the 1984 Summer Olympics in Los Angeles. Although Jamrich was interested in continuing to coach, the time commitment proved too challenging. On top of his career as a science researcher, he was a husband and a father to an autistic son.

Over his career, Jamrich broke several American records in high jumping and still holdsthe record in the 60–64 age group at 1.67 meters (5.5 feet), which he earned in 2011.

His growing list of championship titles is impressive and, for many, hard to believe.

“They’re a little bit confused when I tell them I’m a high jumper,” he said. “They’re not sure if I’m joking or whether I’m serious, especially when they ask me how old I am.”

Jamrich attributes his success to hard work, dedication, and a rigorous exercise regimen. He spends 30 to 45 minutes every day working out—weight training three times a week, high jumping twice a week and focusing on sprints and plyometric exercises the rest of the time.

“If you really stick to exercises, you don’t feel like you are aging that fast,” he said. “You still feel like you have energy, power and speed. … People say 60 is the new 40. To a degree, it is.”

Jamrich plans to train for an upcoming high jump championship in Spokane, Washington, this summer.