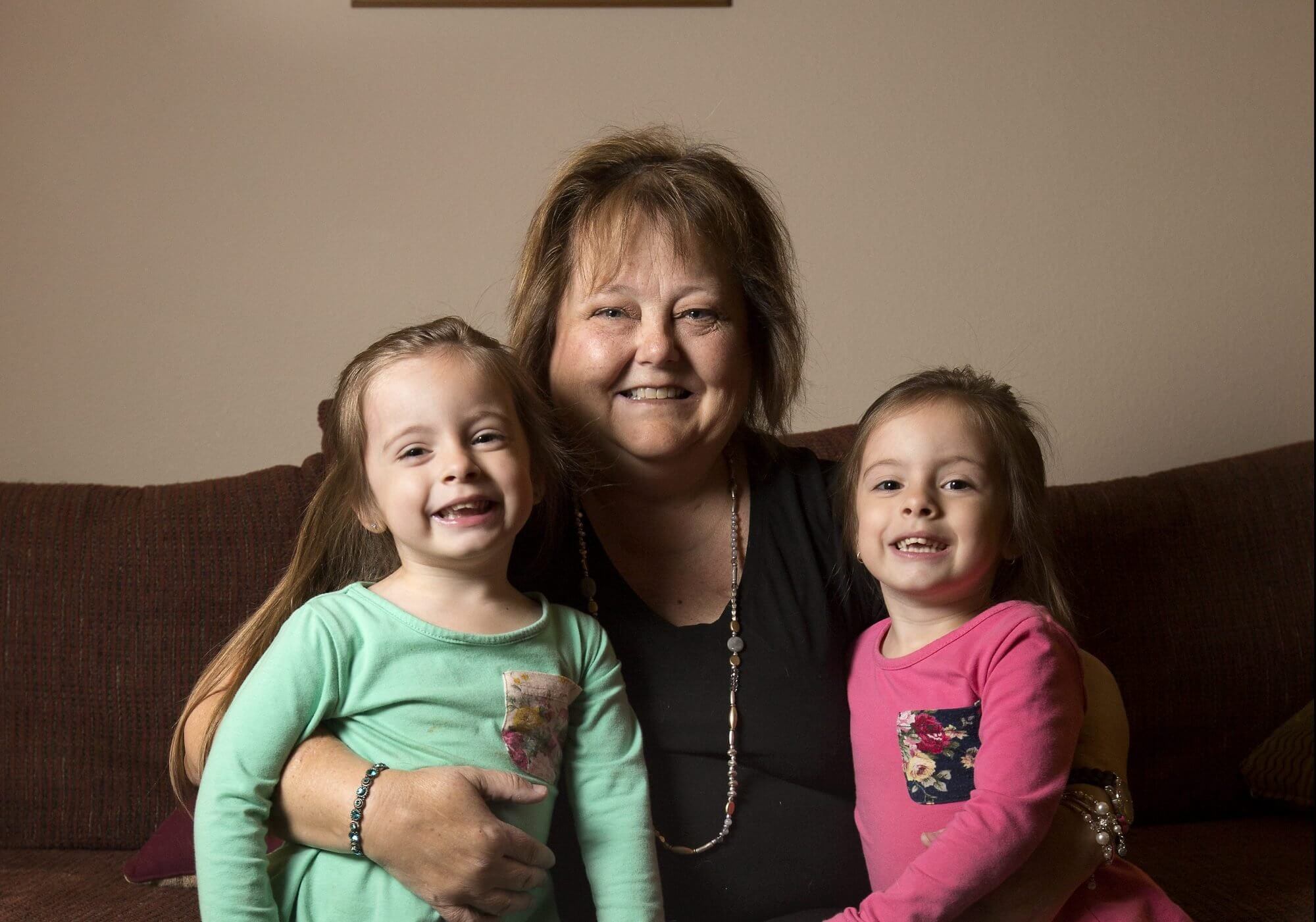 On a chilly morning in mid-December, Lisa Neely sat in her sewing room and watched as her twin granddaughters whipped up a feast in their plastic play kitchen. A Christmas tree twinkled through the front window where, just four days earlier, millions of tiny snowflakes had settled onto the lawn—a rare and extraordinary sight in Spring, Texas. Kaleigh and Kinsley, who turned four in November, soon grew bored and moved on to a game of dress-up, giggling over their wide-brimmed hats and the oversized sunglasses discovered at the bottom of Neely’s purse. They were full of energy and growing anxious for lunch, the promise of Chick-fil-A fresh on their minds.

Every so often, Neely bent down to tell them how much she loved them. She brushed wisps of hair out of their faces and kissed their foreheads.

Not a minute goes by that Neely doesn’t feel grateful for their time together. It’s all a gift, she often says—the good days and bad days. And it’s true. After all, it’s been seven years since her own life was saved by a young woman’s heart.

Neely’s health began to fail in late 1999, when she fell ill with bronchitis. Despite treatment, her condition worsened and she grew so inexplicably weak that one morning she couldn’t get out of bed. Convinced that her infection had turned into a bad case of the flu, she went to the emergency room, where physicians told her she was suffering from cardiomyopathy, a severe condition in which the heart muscle becomes enlarged, inhibiting blood flow and often leading to heart failure.

Neely was stunned. She was just 37—with four children ages five to 15.

“My first thought was that my kids were going to be those kids with no mom,” she said.

For the next 11 years, Neely took medication and underwent surgical procedures in an attempt to keep her heart functioning as efficiently as possible. It was not an easy road. She forced herself to hold it together for the sake of her children, but would often find herself stopped at a red light with tears streaming down her face. It was like a black cloud followed her everywhere—as if lightening could strike at any time.

And it did. During routine oral surgery, Neely flat-lined on the operating table and was resuscitated with CPR. As her heart continued to fail, she was placed on the transplant list. Eventually, an electrophysiologist implanted a defibrillator to treat her dysrhythmia; the first time it fired, Neely woke up on the kitchen floor. Driving became too risky, and bit by bit she lost many of the freedoms she used to enjoy.

Still, she was in denial.

“I remember asking my cardiologist the same question so many different ways. I’d say, ‘So a weak heart is not going to last as long as a regular heart?’” Neely recalled. “But the answer was always the same.”

In the months that followed, her defibrillator would go off more and more frequently—a shock that would reset her heartbeat and essentially save her life. But on the day it wouldn’t stop, when it fired again and again and again, the cardiologist told her husband he didn’t have time for an ambulance; he needed to drive his wife straight to the medical center as fast as he could.

She was admitted to the Texas Heart Institute and underwent a procedure for an intra-aortic balloon pump to temporarily assist with blood flow. Surgery was scheduled for a left ventricular assist device, known as an LVAD, to more permanently supplement her heart’s pumping mechanism.

But then, on a Saturday evening, a nurse came in and told Neely that her orders had been switched to NPO—nothing by mouth—meaning she could no longer eat or drink anything until further notice. Neely was confused. She knew this was a requirement for surgery, but they wouldn’t be inserting the LVAD on Sunday morning, would they?

It took less than a minute before her mind started racing, and she grabbed her cell phone and called her husband.

“Something’s up,” she told him.

As they spoke, the phone in her hospital room rang, confirming her suspicions. It was the transplant coordinator with news from LifeGift, the designated organ procurement organization for much of the state of Texas.

But sitting there in bed, watching her now-grown children smiling and laughing, she couldn’t stop thinking that someone had passed away in order for this to happen; that somewhere, there was another family falling apart. 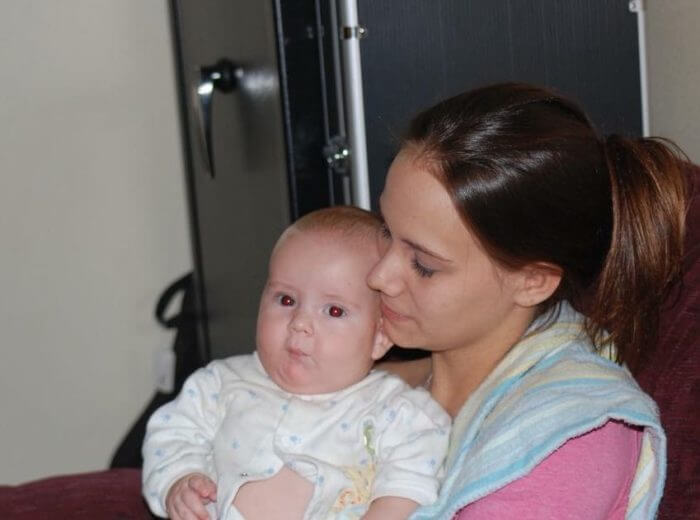 Felecia Dawn Baker was born on Feb. 4, 1984. The youngest of five, she spent her childhood doted upon by her older siblings.

“Everybody loved her,” Felecia’s mother, Marla Ellsworth, recalled. “They wouldn’t leave her alone. She was like their baby doll, so pampered. The sweetest girl in the whole wide world.”

Growing up in Wyoming, Felecia was a tomboy, a “ball-cap kind of girl” who preferred hiking and camping in the wilderness to playing with makeup and practicing for dance recitals. As she grew older, her interests expanded to include gardening, reading mysteries and romances, and later, being a mother herself.

“One of her favorite things was being a mom to her boys,” Ellsworth said. “She loved going on adventures with them, always with the youngest on her hip.”

Felecia eventually settled in Marble Falls, Texas, after her parents divorced and her father moved to the area, and found her calling as a certified nursing assistant at a local nursing home. She made it her mission in life to teach her children everything she knew, from pitching a tent to cooking dinner in their small kitchen at home.

On Saturday, Nov. 13, 2010, Felecia died in a car accident at the age of 26. Her two young boys were strapped into their car seats in the back. When a State Trooper asked the eldest what had happened, he said that his mom had gotten a flat tire, that she had gotten mad and kicked it, and that when she went to move the car, they’d gotten hit. After that, she didn’t wake up.

Hours after learning that a heart was available, Lisa Neely was wheeled into surgery. By the following morning she was sitting up in bed eating ice pops—the transplant had been wildly successful. It was a Monday. She told her surgeons she’d be home by Thanksgiving.

“Nobody’s arguing with you,” they said.

But late Tuesday, Neely went into cardiac arrest. With no time to spare, her cardiologist turned to a young surgical resident in the room and hastily gave him orders.

“Open her up and massage her heart.”

The resident clipped the stitches, cut the sternum wires and separated her breastbone. Then he took her heart—Felecia’s heart—in his hands. For more than an hour he manually pumped blood to her brain and fingers and toes until Neely’s cardiothoracic surgeon could get there.

Over the course of that week, Neely was in and out of surgery, and in and out of consciousness. After a while, she said her chest was essentially covered in cellophane wrap, the surgical team just waiting for the next issue to arise. But she fought—they all did—and eventually her sternum was shut again for good.

When Felecia was just two years old, her family went on a week-long camping trip. It was unseasonably hot and one day, quite suddenly, Felecia was nowhere to be found. Her family panicked and began frantically searching the woods and trails. Her mother recalls memorizing license plates that were leaving the park—“Just in case”—as she drove into town to call a search and rescue team. Chaos ensued for what seemed like hours, and boats had already begun dragging the lake when someone thought to look inside the sleeping bags. There was Felecia, who had gotten overheated and crawled inside. She looked up drowsily as her siblings all fought to hug her at once.

As a young adult, Felecia went with her stepfather to the DMV to get a new driver’s license. Filling out the application, she paused at the part that asked if she wanted to be an organ donor.

“What does that mean?” she asked.

“It means that if you died, you would save other people’s lives,” he told her.

“Oh, well of course then,” Felecia said, checking the box.

Neely’s recovery took longer than her doctors anticipated. She grew frail—even the thought of food made her stomach turn—and she struggled to get out of bed. After conversations about moving her from the hospital into a rehab facility began, she asked her cardiologist if instead she could go home by Christmas. No one seemed optimistic, but one day in late December, the transplant coordinator came into her room and said, “Oh my God, he’s sending you home.”

Home was exactly the medicine Neely needed. In just one week, she went from wheelchair-bound to walking up a driveway to her longtime boss’ annual New Year’s Day bash. After that, there was no turning back.

These days, Neely fills her time with activities that bring her joy—a part-time job, swimming in her pool, learning to quilt, and filling her seven-passenger SUV with grandkids for special outings with their “MoMo.” She also volunteers with LifeGift in hopes of honoring Felecia’s memory and encouraging others to become organ donors. Every day, she thinks about what she would have missed had it not been for Felecia’s heart.

“I’ve had seven years of life I wouldn’t have had,” Neely said. “I can’t tell you how many times I look up and I’ll say, ‘Thank you, God, for letting me be here for this.’”

Through letters, Facebook, and later, in person, Neely has connected with members of Felecia’s family, including her mother and sisters. At the time of the transplant, Neely was given only minimal information—that her heart donor was a 26-year-old female from the Austin area—and told that after a period of time, she could write a letter to the family via LifeGift. To protect the privacy of both parties, all correspondence between transplant recipients and donor families is anonymous to start; it is up to each person to decide how much he or she would like to share.

Both Ellsworth and Neely are grateful the other was so open.

“We thank God every day for Lisa,” Ellsworth said. “When you lose a child, just knowing that she’s got a heart that’s still beating, knowing that her heart is still alive—it keeps us going.”

Sometimes Neely worries that she isn’t doing enough to give back. She cites the oft-quoted verse, “To whom much is given, much is required,” and says she is constantly striving to make Felecia’s family proud.

“I have always said that between my will to live and her strong heart, we survived. And I do think of it as ‘we,’” Neely said. “Sometimes, I call it ‘our’ heart.”