Life after the NICU

Checking in at the Tiny Tot Clinic at UT Physicians

Life after the NICU 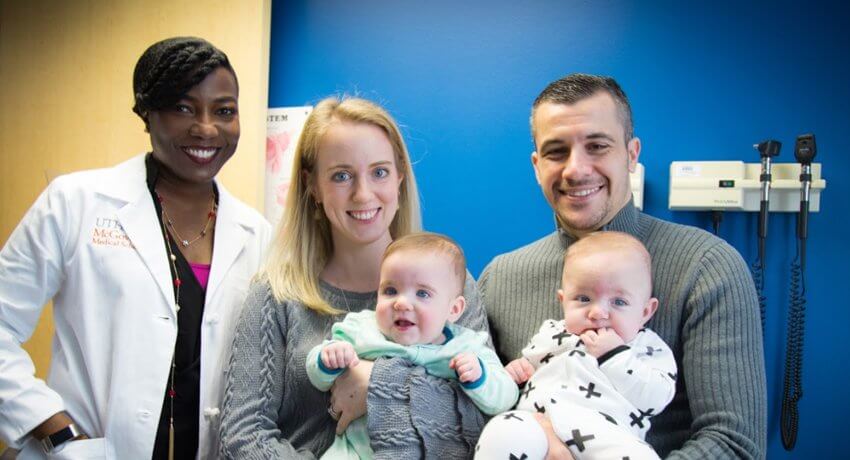 Shortly after Luke Lombardi and his twin sister Sofia were discharged from a newborn intensive care unit or NICU, they were enrolled in a special clinic for premature babies operated by UT Physicians.

The twins needed help accomplishing developmental milestones that many parents take for granted such as rolling over, pushing up and sitting up.

The Tiny Tot Clinic is helping the Lombardi twins and other premature babies realize their full potential and is for children up to 6 years of age. UT Physicians is the medical practice of McGovern Medical School at The University of Texas Health Science Center at Houston (UTHealth.)

“These smallest of patients require very close follow-up,” says Andrea Duncan, M.D., the clinic’s medical director and an associate professor of pediatrics at McGovern Medical School at UTHealth. “In a NICU, the babies are cared for 24/7. When they’re released, it’s up to the parents to provide that care.”

That follow-up care is particularly important for premature babies who have a heightened risk of developmental issues such as movement, speech, cognitive and behavioral disorders that, in some instances, ultimately lead to school failure.

“Because they were born so early, many of these children are playing catch up,” says Duncan, noting that about 80 children that are seen in the clinic right now, with 20 new children being added per month on average. “There are a number of things we can do to support their strengths, prepare them for the next milestone and to intervene when we see that something is amiss.”

In the last weeks of pregnancy, organs such as the brain, lungs and liver are still being developed. In addition to developmental issues, preterm babies have a heightened risk of lung disease, heart complications, brain injury and cerebral palsy.

In a perfect world, Luke and Sofia would have been born in May of 2017 but instead arrived in January of that year. Born at 24 weeks of pregnancy, each weighed less than two pounds and had critical health challenges that had to be dealt with immediately.

In the NICU at Children’s Memorial Hermann Hospital, Luke had three surgeries for bleeding on the brain and Sofia, treatment for a collapsed lung. Sofia was discharged in May and Luke in June.

Luke and Sofia now weigh 17 pounds and are doing much better but will still have to deal with chronic health issues. Sofia has a hole in her heart and Luke, hydrocephalus.

“The Tiny Tot Clinic has been a godsend for us,” says Christine Lombardi, the twin’s mother and a Houston realtor. “They’ve been with us every step of the way.”

Luke and Sofia are the first children for Christine and her husband Federico, an importer/exporter. “It has been a roller coaster ride, and we have received help along the way,” she says.

Born at The Woman’s Hospital of Texas, the twins were later transferred to Children’s Memorial Hermann Hospital. “I was terrified. Neither of us had ever had any medical issues. We were told that they had a low chance of survival at that weight,” Christine recalls.

It would be two weeks before Christine would be able to hold Luke.

At the Tiny Tot Clinic, Duncan and her colleagues are helping Sofia and Luke develop their fine motor skills.

“With Dr. Duncan and the rest of the Tiny Tot Clinic team, our children are getting the best chance of development. We are realistic and are giving them the best life we can,” Federico adds.

In addition to counseling and therapy, Duncan’s team assists with issues regarding sleep, feeding, behavior, movement and other developmental difficulties.

“The parents and families of children born with these types of concerns often experience high stress, worry and difficulty with adjustment,” she says. “We’re here to help.”

“The Tiny Tot Clinic fulfills a critical need in a specialized patient population by providing developmental components that are critical to creating a medical home for NICU graduates and other children at high risk for neurodevelopmental and behavioral deficits,” Duncan says.

The Tiny Tot Clinic receives support from the Memorial Hermann Foundation, the Baxter Foundation and the Cerebral Palsy Foundation.

“We will come to the Tiny Tot Clinic for as long as we can,” Federico says. “You can tell they really care about the babies. They always want to see pictures, and we have lots of those.”