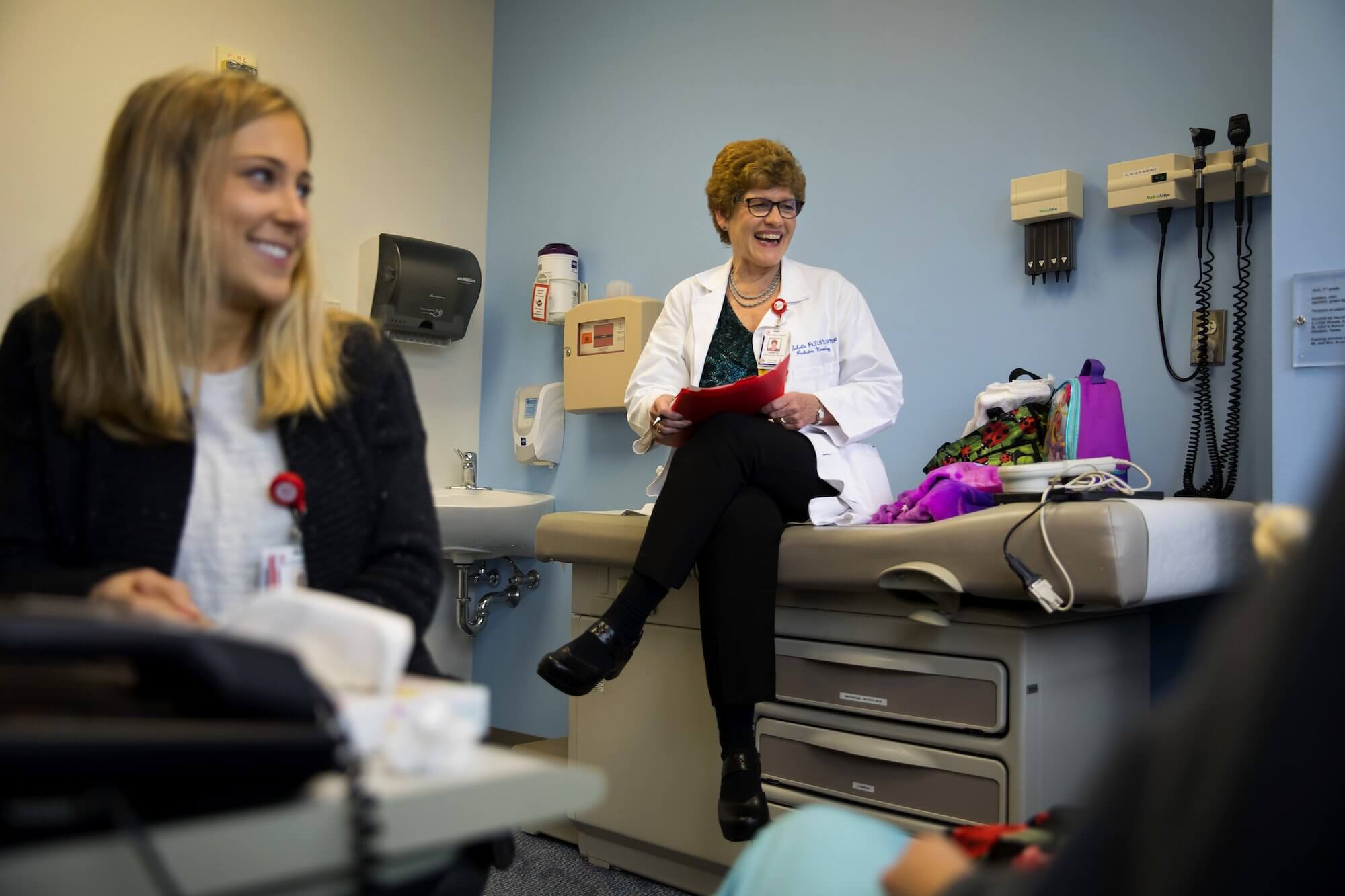 The plastic container held cooked carrots and un-melted butter chopped into pieces. The ratio of fat and carbohydrates had to be perfect. For more than seven years, everything Kristin Ybarra has put into her mouth has been measured and monitored to ensure her body burned fat instead of glucose for energy.  Since starting the diet, her hours-long, nonconvulsive seizures, which rendered her blank and unresponsive, had completely disappeared.

Originally developed in the early 1900s as a treatment for epilepsy, the ketogenic diet is high in fat and low in carbohydrates, which forces the liver to covert fat into fatty acids and ketone bodies as a replacement for glucose as its primary energy source. Typically, carbohydrates are converted into glucose, which is the body’s preferred form of energy, but in their absence, ketone bodies will do. This produces a state known as ketosis, and for reasons not completely understood, it leads to a reduction in seizures.

“Although the diet has been around for a least nine decades, and there has been a lot of research done, we still don’t really know the exact mechanism for why the diet works for treating epilepsy,” said Rebecca J. Schultz, Ph.D., RN, pediatric nurse practitioner at the Epilepsy Center at Texas Children’s Hospital. “In some way, we know that since it does have an effect on seizures, it alters the excitability of the nerve cells.”

Some research suggests the ketogenic diet impacts potassium ion channels, which are cell membrane pathways that generate electrical signals in cells. Ketosis has also been shown to lower insulin levels and help train the body to become exceedingly efficient at burning fat. Add to that the absence of carbohydrates—including all processed foods—and it’s no wonder the diet has recently been touted by celebrities and social media influencers as a tool for dramatic weight loss. But using it to trim down is not without controversy, and Schultz emphasized the importance of medical supervision due to potentially harmful side effects.

“So many people come to me because they want off ‘those poisonous medicines,’ and to be on something they perceive as natural,” Schultz said, referring to patients who want to replace their epilepsy medication with the diet exclusively. “One of my responses to them is, ‘Wait a minute, think about this. What is natural about a high-fat diet? It can be harmful. You can die from this diet if it’s not properly administered, or if you happen to have some underlying metabolic problem.’ When I talk about being high in fat for the strict ketogenic diet, we’re talking 90 percent of the calories are coming from fat. It’s a huge change in the way you’re eating.”

According to the Centers for Disease Control and Prevention, nearly 470,000 children in the U.S. have epilepsy. Approximately 70 percent of those patients can be managed with medication, said Dave Clarke, M.D., who recently joined Texas Children’s Hospital as director of clinical epilepsy and pediatric neurology and developmental neuroscience. But the remaining 30 percent?

“We need everything in our arsenal,” he said.

One approach is the ketogenic diet.

“It has multiple benefits, independent of just treating seizures,” Clarke said. “It sometimes helps to improve mood, maybe because it decreases seizures. It may help sleep, and in some people, it may even help cognition a bit.”

For some types of epilepsy, the ketogenic diet is so effective that it becomes the primary treatment. Disorders of brain metabolism, including a genetic abnormality called GLUT1 deficiency syndrome and a neurodegenerative disorder called pyruvate dehydrogenase deficiency, respond especially well to the diet, Schultz explained.

“For those children, particularly the children with GLUT1 disorder, they can become seizure-free almost immediately once they’re placed on a ketogenic diet,” said Schultz, who recalled that one patient who was suffering from hundreds of seizures a day no longer experienced them after fewer than three days of the high-fat, low-carb regimen.

“The dramatic changes that you can see in those patients are quite remarkable,” Clarke added. “They may be severely impaired, unable to engage with parents or the outside world. But with that change in diet, many of these kids can interact appropriately and significantly alter their lives.”

Individuals with these types of epilepsies are encouraged to adhere to the restrictive diet throughout their lifetime; after all, they suffer from a genetic disorder that you can’t outgrow. But that’s not necessarily the case for children with epilepsy caused by other biological errors, in which the standard of care is to follow the ketogenic diet for just two years.

“One reason we say that is, even though the diet has been around for 90 years or more, we still don’t have any longitudinal data to tell us what the cardiovascular risks are,” Schultz said. “The thought is that two years is a safe period of time to be on it, but beyond that we can’t answer some of the long-term risks. Having said that, I have patients who have been on the diet for far more than two years because it’s the most effective treatment for their seizures.”

Interestingly, for many patients, just two years on the diet can have lasting effects. Clarke described it as a “reset button” and explained that the diet sometimes helps stabilize the brain in a way that persists long after the reintroduction of glucose.

No falling, no thrashing

Kristin was just four years old the first time her mother, Sarah Ybarra, noticed she was having a seizure. More than likely, Sarah said, it wasn’t the first, but Kristin’s seizures were not apparent. There was no falling to the floor, no thrashing—nothing like you see in the movies.

Kristin was born with a congenital brain defect, so her mother was not unduly alarmed by her behavior. But one day, Kristin’s occupational therapist suggested she might be experiencing something called “absence seizures.”

“She would just check out. Her eyes would blink and blink, and then she’d come back,” Sarah recalled.

So she took Kristin to get an EEG at their local hospital in Dallas, where she was diagnosed with nonconvulsive status epilepticus, a condition characterized by confusion or lack of responsiveness—as opposed to convulsions. According to the test, Kristin was having episodes 10 to 12 times a minute. Over time, the episodes grew longer, sometimes extending from six to eight hours.

“We didn’t know what to do,” Sarah said. “We tried different medications and nothing was making them stop.”

Kristin’s care was ultimately transferred to Texas Children’s Hospital in Houston, where doctors suggested she try a strict ketogenic diet. Sarah agreed, and Kristin hasn’t had a single nonconvulsive episode since.

Because of her congenital condition, though, Kristin still experiences other types of seizures. Schultz and Clarke utilize all the tools in their arsenal, including medications and surgeries, to try to keep them at bay. Kristin is way past the two-year mark on the diet—come June, it will be eight—but her mother does not want to find out what might happen should she come out of ketosis, and her physicians agree that, in her case, the benefits outweigh the risks.

“I had a mom friend who had a little boy who was on the ketogenic diet, and when he was in first grade, there was a party,” Sarah recalled. “He had a cookie and ended up in the ICU.”

Foods allowed on a ketogenic diet vary depending on the child and the ratio of fat and carbohydrates that work best for their condition, but some staples could include meat, eggs, butter, cheese, heavy whipping cream, oils, nuts, avocados, low-carb vegetables and small portions of some fruits.  Kristin, who had to stop eating meat because it was growing increasingly difficult for her to chew, gets a large percentage of her calories and nutrients from a special formula through a feeding tube. She also eats two snacks a day that include a form of fat, such as butter, mayonnaise or heavy cream, and a small amount of carbohydrates like peas, carrots or green beans. Her favorite snack is strawberries with cream cheese.

“The portions are smaller because this diet is high in fat, so it’s calorically dense,” Schultz said. “Fat has more calories per gram than carbohydrates, so although the meal looks small, it’s the same number of calories and you get full.”

Maintaining ketosis is labor-intensive, and to be successful, everything consumed must be weighed and measured.

“You have to measure at a ratio to give her exactly what she needs, including fluids,” Sarah explained. “Kristin is currently at a 2.5 ratio, so it’s 2.5 times as much fat as everything else. If you don’t eat everything in the bowl, you’re not at that ratio anymore.”

The diet’s highly restrictive nature and lack of variety makes it difficult for patients and their families. It limits social opportunities, too. Kids on ketosis can’t have even one sip of coke, much less Halloween candy or a celebratory ice cream cone.

“When we treat epilepsy, we don’t just treat the child,” Schultz explained. “There are a number of individuals that help to treat the child, and families have to be invested.”

“It’s our new normal,” Sarah said. “It’s our family, it’s our life, and it’s all she’s known for so long. But initially, the biggest challenge was eating in front of her. You can’t just come to dinner and sit there with your family and pile your plate with mashed potatoes and green beans. You can’t just have pizza and you can’t have birthday cake. You can’t have all these things that are a part of a kid’s life growing up. And when you have a twin sister and a brother who’s 17 months older, that was a challenge.”

Although it was daunting at first, Sarah said following the diet is like anything else—it takes practice and ultimately becomes second nature.

“You have to prepare and think ahead,” she said. “Figure out substitutions. You make some sugar-free Jell-O with heavy whipping cream that’s keto-approved. You take that extra step to make sure she doesn’t feel left out.”

Schultz and Clarke work with nutritionists to tailor each patient’s diet as much as possible to minimize disruption to their lifestyles.

“It’s important for kids to feel like part of the group and to be able to participate with their peers,” Schultz said. “We tell parents, ‘If you know that the classroom is having a party and they’re going to have cupcakes, let us know, because we have recipes for ketogenic cupcakes and cheesecakes.’”

“It’s basically peanut butter with a lot of butter,” Schultz said. “According to what my patients tell me, they make a wonderful, delicious treat.”

Despite its potential for treating epilepsy, families often find the diet too overwhelming, especially when kids are picky eaters. Sarah noted that in some ways, it’s easier to maintain the diet because Kristin is not a typical 14-year-old.

“She’s not a teenager that’s got to have it her way. If you’re fully developmentally aware, that’s going to be harder, because then you’re aware of what you’re not getting. Ultimately, families have to make the best decisions for themselves, but the diet is definitely worth a try.”

As Sarah spoke, Kristin clutched her Elsa doll while she listened to music on her iPad. Her nails were painted a sparkly blue, another nod to Frozen, her favorite Disney movie.

“She’s never going to be seizure-free; we know this,” Sarah said. “Our goal is just to give her the best quality of life we can, and if that means we implement five different treatments, then we do.”