Looking at a Flower is art inspired by science, engineering and medicine

Looking at a Flower is art inspired by science, engineering and medicine 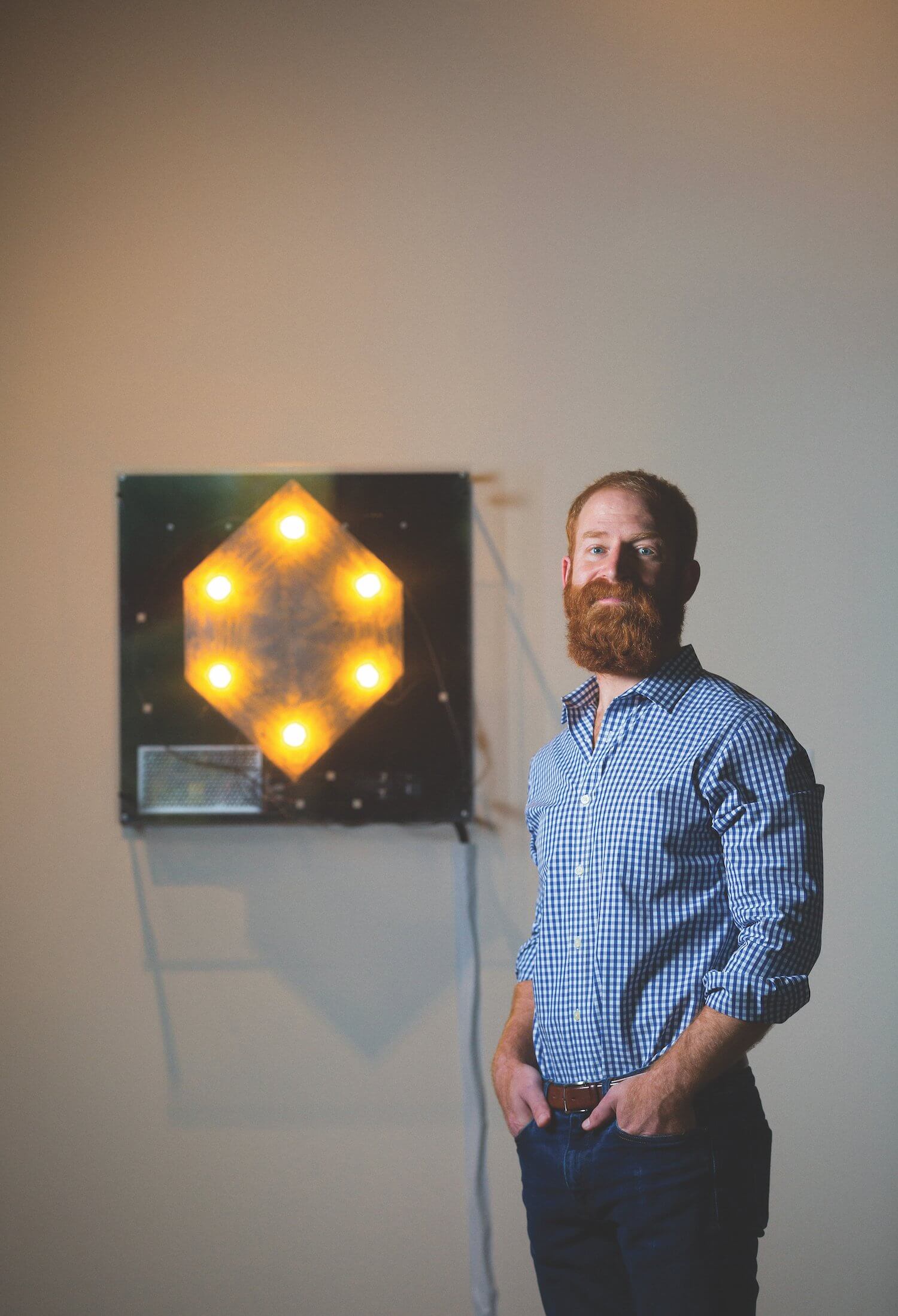 To better understand his surroundings and the human condition, Houston-based artist Joseph Cohen has spent several years embedded in top research labs with scientists, immersing himself in their work.

“I am working with labs in different research institutions and trying to distill the information in a way that will allow me to expand on the capability of science through the lens of art,” Cohen said.

Cohen’s latest exhibit, Looking at a flower, is on display at the BioScience Research Collaborative (BRC) at Rice University, in conjunction with Rice Public Art.

Because of the exhibit’s name, one might expect to find paintings of peonies or fields of lavender. Instead, Cohen dives deep into the microscopic intricacies of science, engineering and medicine. The three-piece exhibit in the lobby of the BRC uses molecules as a spring- board for mixed-media works. Each piece has two parts that complement one another while remaining distinct.

To create the first set in the exhibit, entitled Where do I stand?, Cohen worked with the Tour Group at Rice University using lasers, computer imaging and other raw materials. These works incorporate graphene, a form of carbon consisting of a single layer of carbon atoms arranged in a hexagonal lattice, like a honeycomb.

“I worked with laser-induced graphene,” Cohen said. “In a sense, it’s kind of burning it, but not quite because it is doing it in such a way that it’s not just making carbon, it is making a very particular structure of carbon.”

The second set in the show, If he/she could see my love, is a result of time spent in the labs of R. Bruce Weisman, Ph.D., professor of chemistry, materials science and nanoengineering at Rice University, and Daniel Heller, Ph.D., head of the Daniel Heller Lab at Memorial Sloan Kettering Cancer Center and Weill Cornell Medical College.

Heller’s team is harnessing the luminescent properties of carbon nanoparticles to help detect cancer at earlier stages and target treatment therapies for metastatic cancer tumors. Cohen’s work with carbon nanotubes—forms of carbon with a cylindrical nanostructure—follows a similar search and find mission. Under light, carbon nanotubes are naturally fluorescent; the colors they release depend upon the structure of the tubes themselves. Cohen uses them to expose light that would otherwise not be visible to the human eye.

“The material allows me to create artwork that directly addresses the near-infrared spectrum,” Cohen said.

A song for my father is the final piece in the exhibit. To develop the vocal painting on canvas, Cohen worked with Ennio Tasciotti, Ph.D., director of the Center for Musculoskeletal Regeneration at Houston Methodist, to analyze the molecular structure of various pigment samples and create “color chords.” Cohen used these color chords as the basis for a musical composition and then produced a painting based on the song, in essence allowing viewers to hear how a painting sounds and see how a song looks. Visitors to the exhibition who have headphones can listen to the song on an iPad mini.

Looking at a flower will be on display through April 8 and is located in the lobby of the BioScience Research Collaborative at Rice University, 6500 S. Main St., on the corner of University Blvd. Information: brc.rice.edu.