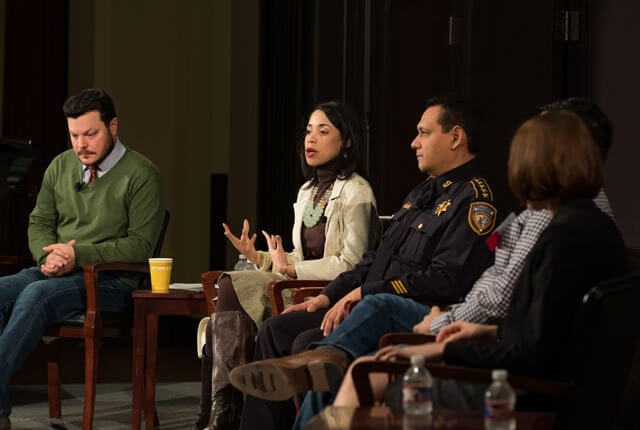 A group of Texas’ young bright minds and leaders gathered in Baker Hall’s Doré Commons Jan. 26 to explore some of the state’s economic engines and to look broadly at the key factors that impact the process by which innovation is put into motion and how it transforms communities, industries and the way people live.

The conference was part of the Texas Lyceum’s three-day meeting in Houston, convened under the theme “Texas: State of Innovation,” and was co-hosted by the Baker Institute’s McNair Center for Entrepreneurship and Innovation.

Founded in 1980, the Texas Lyceum is a nonprofit, nonpartisan and statewide leadership organization that identifies young Texas leaders under the age of 46 and informs them on the most pressing societal issues of the day through open dialogue.

“We are entering an age where software is taking over human work, cryptocurrencies are challenging traditional banking and bioengineering is pushing the boundaries of the once impossible related to human life,” Texas Lyceum President Brad Morrison wrote in his welcoming note. “I am excited that the overall conference will explore the current state of innovations such as these and their impact on society.”

Over the course of the full-day program, which culminated with afternoon sessions at Houston Methodist Hospital, attendees heard from leaders in government, academia and industry about the policy tensions of change, the impact of technology or information gaps on implementing innovation, resource constraints that affect innovation and how human capital fits into the innovation equation.

Edwards highlighted the recent creation of a new nonprofit, Houston Exponential, as part of a citywide initiative to boost Houston’s appeal to technology investors and innovators. Houston Exponential is tasked with becoming the central organization connecting Houston’s capital, academics, business accelerators, startups and corporations. It merges the Houston Technology Center with the Greater Houston Partnership’s technology innovation roundtable and the Mayor’s Technology and Innovation Task Force.

Houston was ranked 39th in the U.S. in venture capital activity, according to a recent McNair Center report, even though it’s the fourth-largest U.S. city, and Houston Exponential has set its sights on addressing this challenge, Edwards said.

“This effort (Houston Exponential) should resemble and look like Houston in that … it’s open (to) and inclusive of all the variety of communities,” Edwards said. “We created a structure where people can participate in working committees.”

White, a former management consultant and native Houstonian, described how the nonprofit Entrepreneurs for Houston was formed in response to the Hurricane/Tropical Storm Harvey disaster. As Harvey bore down on the Texas Gulf Coast, a corps of civic tech volunteers created interactive mapping and other digital tools to help rescue and provide relief to Houston-area residents. “When Hurricane Harvey hit, we really saw the technology community step up in a big way,” White said. Her organization has now launched a campaign to build a fund that would support those volunteers and codify their efforts so that other communities can be better prepared when disaster strikes.

Tandon was one of the coders that set up an interactive map pinpointing shelters or organizations that were helping evacuees displaced by Harvey flooding. He created Code Park Houston in 2015 as nonprofit for teaching coding to children with limited access to technology and technology classes. Through hands-on workshops and classes, his organization’s students learn to make electronic cards, digital art, games, animations and more while learning science and technology. “We try to create motivation in the student first by asking, ‘What kind of problem would you like to solve?’ and we then facilitate that by providing the skills needed,” Tandon said.

Gonzalez, a former City Council member, discussed a new “telepsychiatry” pilot program his office debuted in December. The program arms deputies with tablets equipped to dial psychiatrists for urgent video chats to offer professional help out in the field to people who don’t necessarily need to go to jail or an emergency room. The program is believed to be the first of its kind in the country and could end up saving the county money. “We have to be innovative,” Gonzalez said. “We need to make sure that modern-day policing isn’t antiquated.”

As part of their discussion, panel members also touched on the recent decision by online retailer Amazon to eliminate Houston as a candidate for its second headquarters. The decision was considered a concerning moment for a community known as the world’s energy capital, a vibrant hub of international trade, an ethnically diverse population and the nation’s largest medical center.

“Sometimes you need adversity to get people’s attention,” Edwards said. “I think this is a huge opportunity for us to really begin to connect the dots. Sometimes people have to see that they’re not as far along as they need to be in order for them to move on some of the things that are heavier lifts, like investment in some of our infrastructure, like transportation.”

Other Rice speakers at the event included Moshe Vardi, director of Rice’s Ken Kennedy Institute for Information Technology, the Karen Ostrum George Distinguished Service Professor of Computational Engineering and professor of computer science, and Bobby Tudor ’82, chair of the Rice Board of Trustees, who moderated a panel on “Powering the Next Generation: A Conversation on Energy Innovation.”

“The Texas Lyceum’s focus on innovation and entrepreneurship at this meeting is a natural fit for the McNair Center’s nonpartisan, data-driven and policy-relevant research, which is the main source of data and policy advice on these topics in Houston,” said Edward Egan, Baker Institute fellow and director of the McNair Center. “We enjoyed co-hosting the meeting and look forward to future collaborations.”