In the Fast Lane with Olympian Seun Adigun

In the Fast Lane with Olympian Seun Adigun 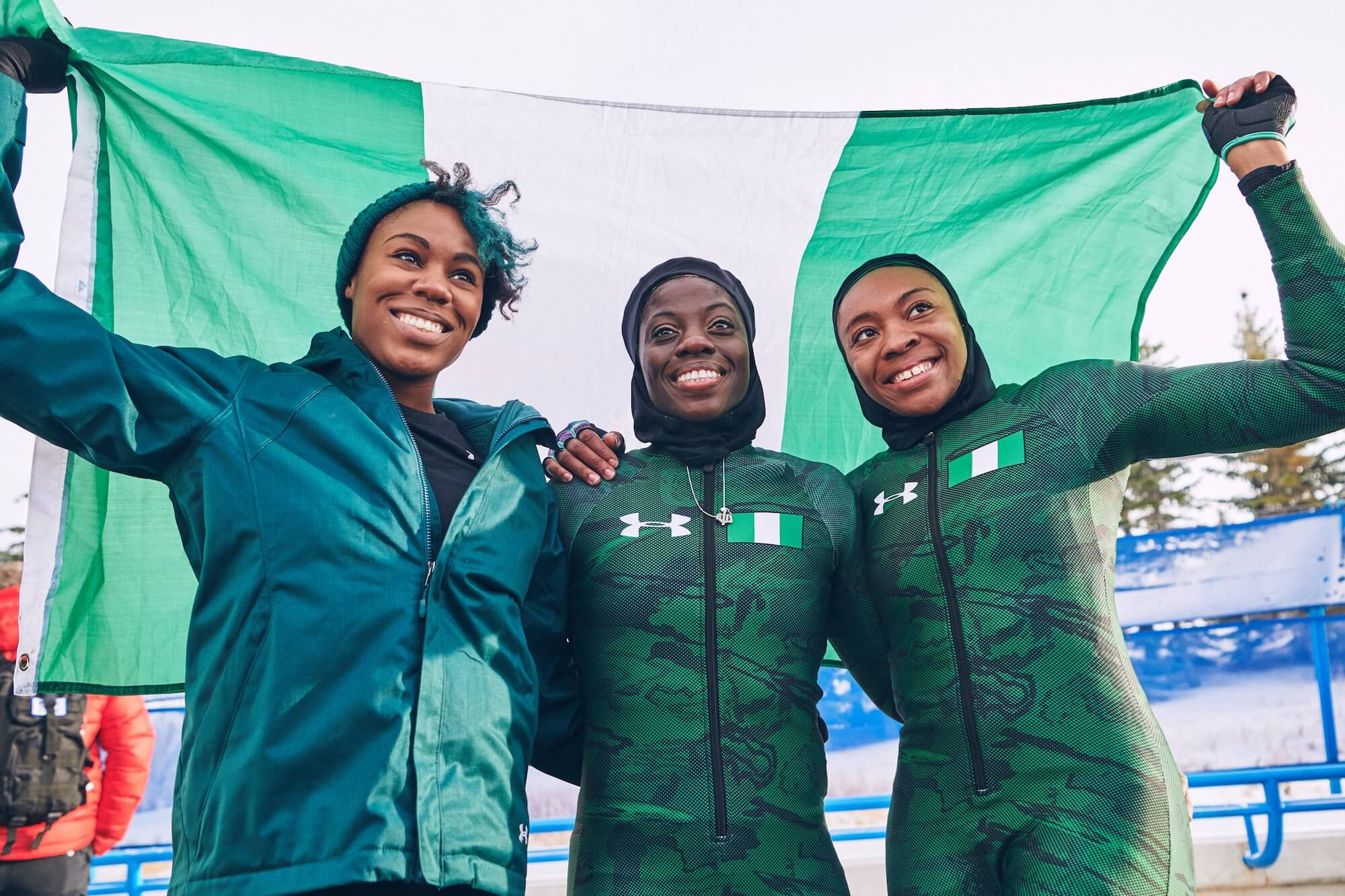 Seun Adigun is headed to the 2018 Winter Olympics, one of the three Nigerian-American women who constitute Nigeria’s bobsled team—Africa’s first-ever Olympic bobsled team and the first Nigerian team to qualify for the Winter Olympic Games. A University of Houston alum, Adigun, 31, has already built an athletic career as a track and field star, even representing Nigeria as a hurdler in the 2012 Summer Olympics in London. She also served as an assistant coach for the UH women’s track and field team and recently completed her doctor of chiropractic degree from Texas Chiropractic College. 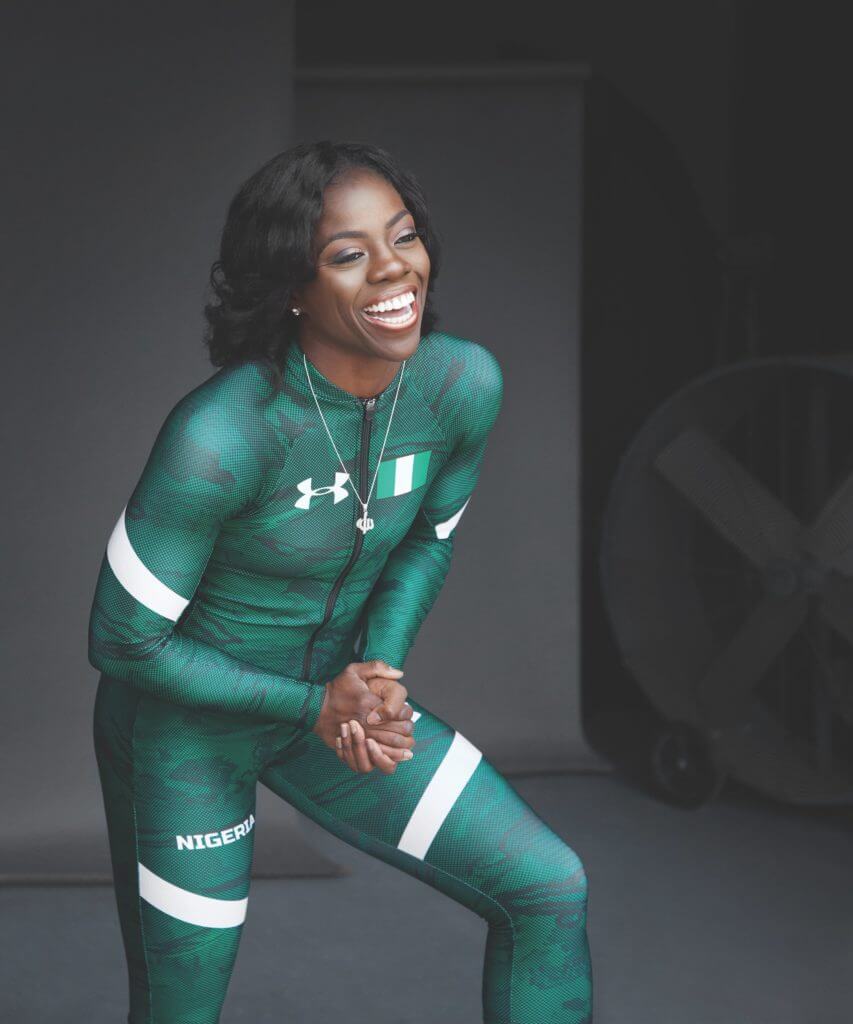 The biggest difference is that you have to get significantly bigger and stronger as a bobsled athlete than you are as a track athlete. You need the weight in order to equate and produce the forces that are necessary for just the basic physics of the sport. If you don’t have the weight on your body, then you have to put it in your sled. You’re already under-sized, and you’re pushing a heavier sled. You’re at a complete disadvantage on the push part, but you try and make up for it with the driving and the weight on the actual ice. We each had to gain probably 15 to 20 pounds just to be on the same playing field as everyone else.

As the driver of the two-woman bobsled, you use a rope and pulley system to steer. Your teammates, Ngozi Onwumere and Akuoma Omeoga, are brakemen—during a race, one of them will help push the bobsled at the starting line, jump in, and then pull the brakes after the end of the race. How difficult was it for you and your teammates to learn a completely new sport?
This sport has the biggest learning curve that I probably have ever experienced in my life. I’ve learned a couple things along the way, but this is totally new. Take a driver who just freshly got their license —16 years old … They know what to do behind the wheel. They have an idea. But then go throw them in Daytona. It might be a little bit different type of driving. That’s how I feel. It’s just straight survival mode the entire time.

And, my brakemen, it just seemed so elementary, where you think, “Ah, you just push a sled, run and jump in, and get out.” No, that’s not just how it is. There’s actually a whole technique and an entire concept behind hitting the sled, and hitting the sled at the same time as your driver, and then generating max velocity within the first five seconds that you can load in and get ready for the driver to get prepared.

Tell me about your first bobsled race. I understand it was a bit of a bumpy ride.
My first race ever, we crashed. It was the first time I had driven the two-man that week, and I’d only gotten three days worth of driving in—maybe two and a half. It was my brakeman’s first time on ice, so this was her first ride, first time seeing a bobsled, first time seeing the ice track, first time knowing what to do. We’re all out there and it’s like, “Okay, here we go.”

I get in, I navigate the track until corner 12. … I only had two more turns before the finish line, but I had so much momentum that it catapulted us up and through the finish line—so the race counted. My very first crash was the very first race, and all I’m thinking in my head: ‘Oh my God. This is just not the start I was looking for.’

But it all worked out. We celebrated as if we’d won something when we realized that we’d crossed the finish line and it counted. 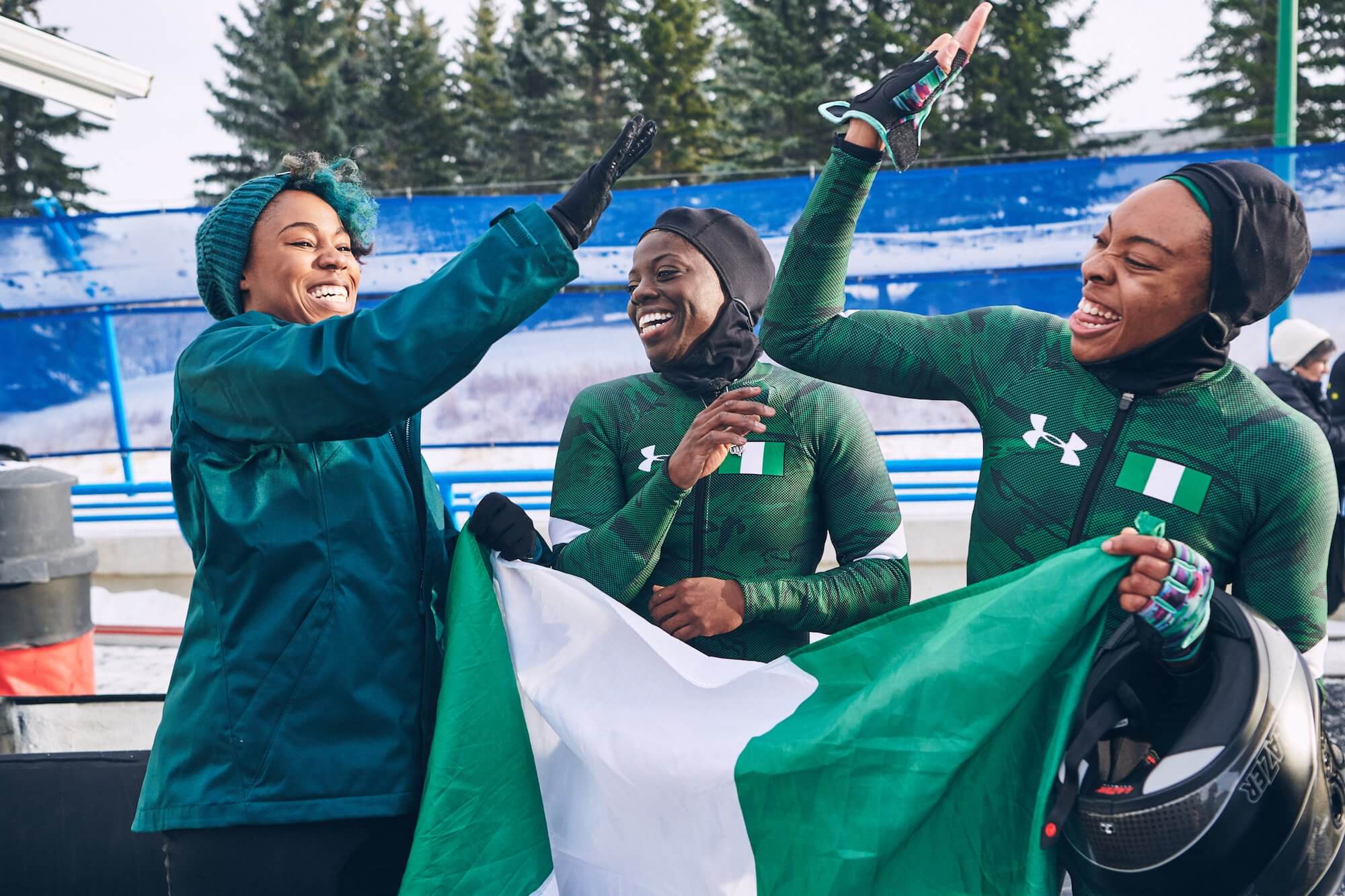 Photo courtesy of Under Armour

As the founding member of the bobsled team, you literally built a bobsled from scratch.
On dry land, here in Houston, we use a wooden bobsled that I’ve named The Maeflower. I built that when I was on the U.S. Team [training as a rookie brakeman]. I was coming back and forth [from Canada] very frequently, and I didn’t want to get left behind in the development like with the other rookies. My brain just told me to go to a hardware store and get up a bunch of wood, some screws, some wheels, a couple door handles, and pot holders, and put them together to make this little push cart thing. That actually served as the primary tool for Bobsled 101 and building the Bobsled & Skeleton Federation of Nigeria.

How did you come up with the name “The Maeflower”?
It’s named in honor and in the memory of my late sister who we called Mae-Mae. Her name was Amezee. I called her Miss Amazing because she was born with sickle cell anemia, so when she would go through crises and come out, I would call her Miss Amazing. She ended up passing away in 2009 from a car accident.

When that happened, I basically decided that anything that I was going to be passionate about in life, I was going to dedicate to her memory. And so, I went ahead and started crocheting “Miss Amazing” on everything, which I could never be cool enough to call myself.

You competed in the 2012 Summer Olympics in London as a 100-meter hurdler representing Nigeria. Then you took up bobsledding, following in the footsteps of other U.S. track and field stars like Lolo Jones, Lauryn Williams, and Aja Evans, and put together Nigeria’s first Olympic bobsled team. It sounds like you really have a hunger for the Olympic Games.
I really stunk it up at the Summer Games. Not because I wasn’t in the best shape of my life or I wasn’t mentally in the best place I’ve ever been, but more so because I had a stress fracture in my left tibia. As a hurdler, obviously, the biggest concern that I had basically from March of 2012 all the way through the Olympic Games in August was trying not to snap my leg in half.

At the time [I started bobsledding], I thought I’d join the U.S. team, fight for a spot on there and give myself some type of Olympic redemption. But then it became much larger than that. 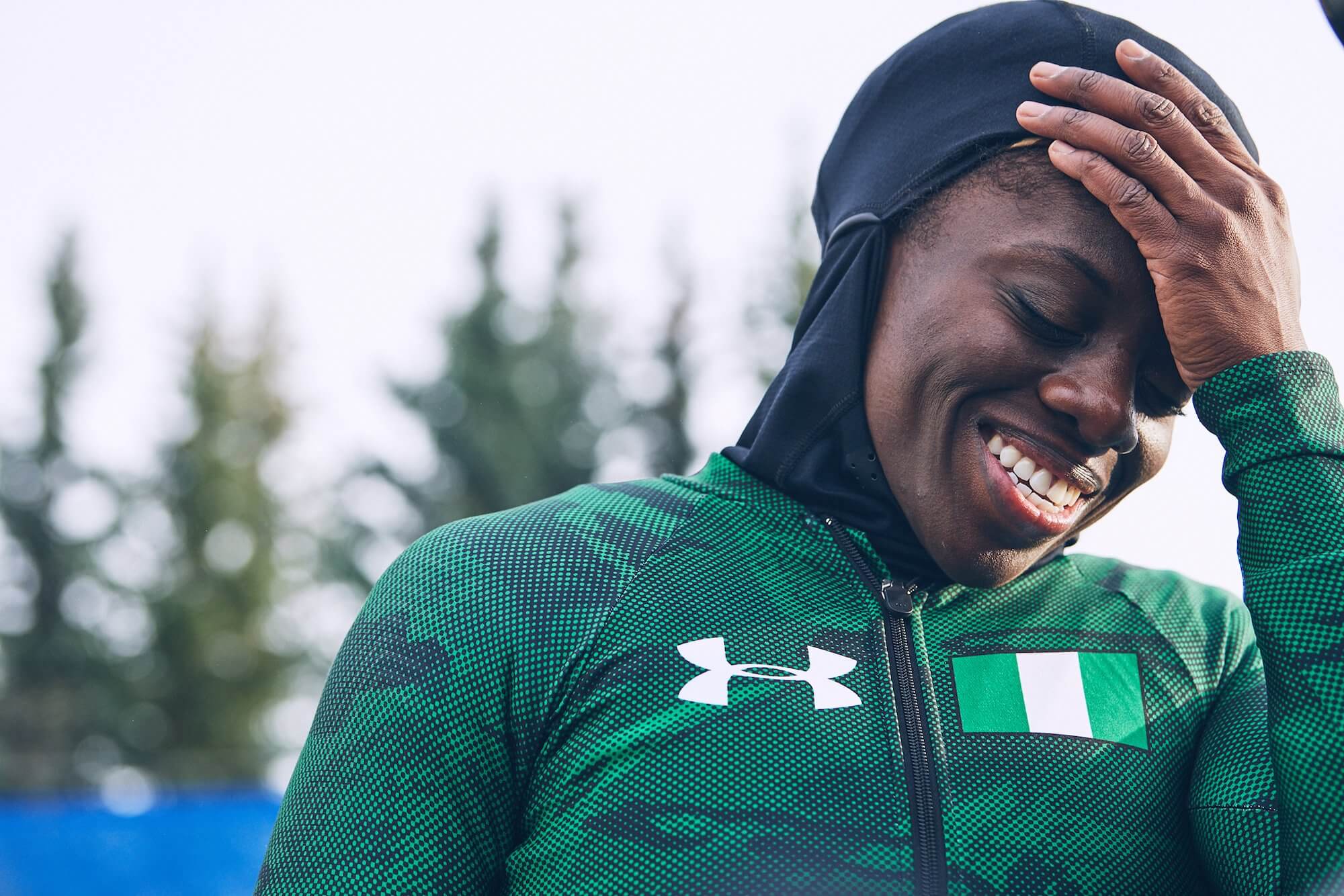 Photo courtesy of Under Armour

Thirty years ago, at the 1988 Winter Olympic Games in Calgary, Jamaica became the first tropical nation with a bobsled team and inspired the movie, Cool Runnings. This year, you and your teammates—Nigerian-Americans with dual citizenship—are Africa’s first-ever Olympic bobsled team and the first Nigerian team to qualify for the Winter Olympic Games. How does it feel to make history?
It’s crazy. I’m still trying to wrap my mind around what’s happening. … But fortunately, there was that level of support, resilience and dedication that came from the Nigerian Olympic Committee’s first vice president, Solomon Ogba, who’s now the president of our federation.

You recently earned your doctorate of chiropractic degree from Texas Chiropractic College (TCC) and master’s degree in exercise and health sciences from UH-Clear Lake. How have you been juggling academic and clinical responsibilities with intense Olympic training?
I honestly only have the one answer: God. I do not know how I made it through the last three years, other than a lot of prayer, very little sleep and just a lot of support from all the people that have been involved from TCC and UH-Clear Lake. … My family, my teammates, and everyone around me really rooted me on into getting everything done, especially when it was really hard.

You’re also in the process of building a business plan for a chiropractic clinic. Why did you choose chiropractic medicine?
When I was injured, one of the things that I really started to hone in on were my mechanics and getting back to the fundamentals of neuromusculoskeletal issues. That really brought me into the light of what chiropractic was because I had a chiropractor who primarily treated me going into the Summer Games.

I also did an internship at a chiropractic office where I learned that there was a lot more to chiropractic than what basically the general public assumed or understood—way more than I actually understood. It just fit and flowed right into line of just bare bones, fundamental anatomy type stuff to drive what actually bodies can do.

I don’t believe that one body and the other operate the same, particularly in sports. You can’t just give two different people the same workout and expect their bodies to respond the exact same way. They may respond similarly, but there are going to be things that will differentiate between their outcomes. If you can understand the fundamentals of why their bodies respond differently, then you could also be able to contribute to those specific differences, to make that individual athlete better. That was what I saw in chiropractic: The ability to see what the bones do, what the muscles do, what everything does to be able to isolate why some person constantly blows a knee when they’re doing the same workout as another person who’s never been injured.

As an athlete and chiropractor, you’ve experienced both sides of sports medicine and undergone multiple types of treatments for injuries.
I really respect the direction sports medicine is going and how integrated practices are becoming so much more common. … I think that it’s just so beautiful to know that the evolution of sports medicine is really now keying in on the development and the success of the actual athletes and the patients.

The way we get the best output from patient outcomes and patient health care is by giving the multidisciplinary approach. There’s been that Batman versus Superman type of appeal: One saves the world in a little bit of a different way than the other one, but they are both saving the world, and if they work together versus against each other, they actually are more powerful.

You’re making history and having fun with it in the process. What’s the secret to your success?
First and foremost, it’s selflessness. The ability to be selfless is what drives your ability to actually see clearly.

The next thing I would say is fearlessness. In being selfless, you’re able to see a lot more sometimes than you really want to. Sometimes you just have to be able to tackle that fear, particularly that of the unknown. It’s always easier to just turn away and walk away from it, but if you just open up to it, you’ll really be able to see exactly what your purpose is.