The Day Lidia Lopez Got Her Bionic Eye

The Day Lidia Lopez Got Her Bionic Eye 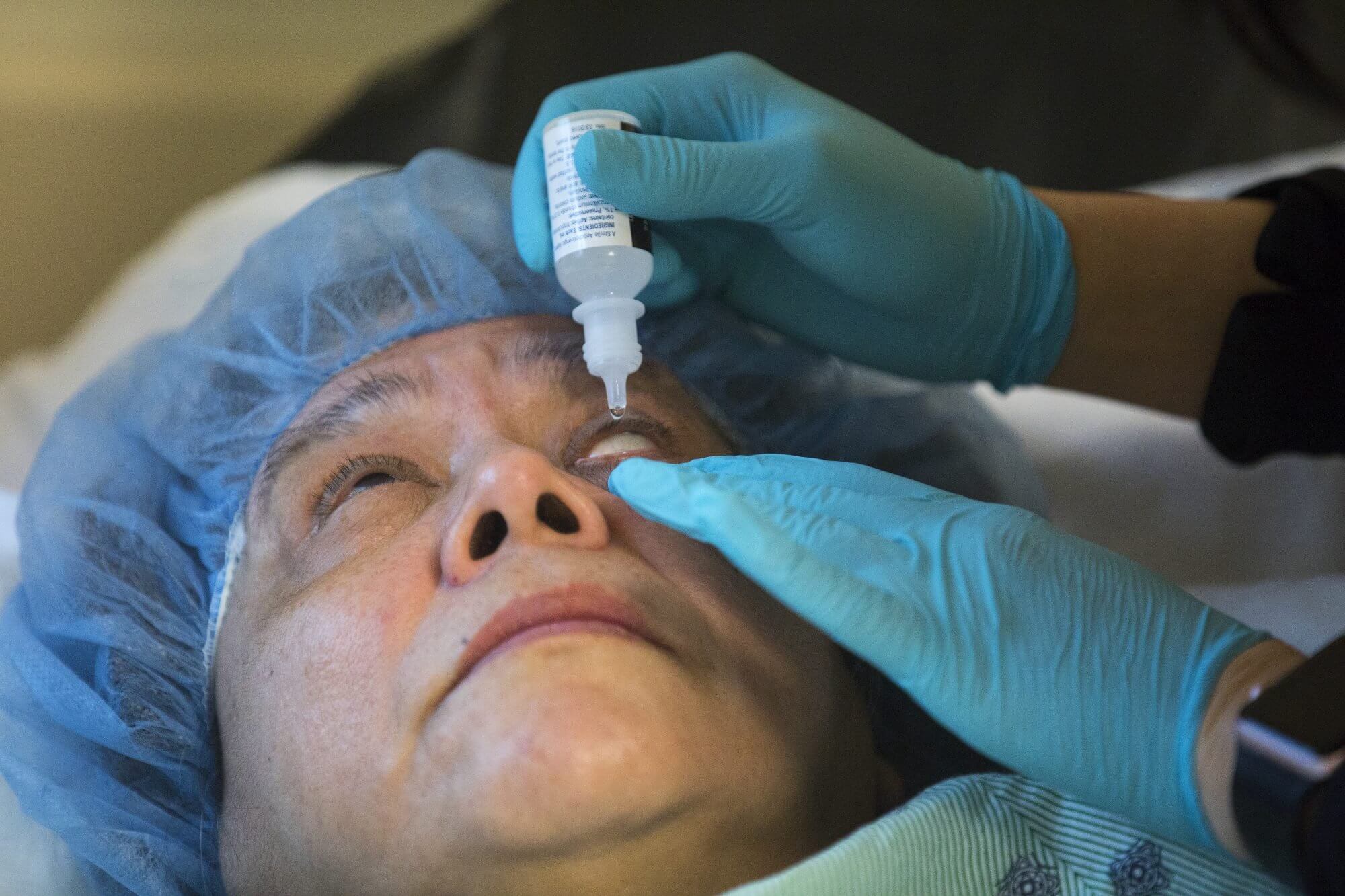 After 10 years of blindness and more than 40 years of deteriorating vision, Lidia Lopez finally got her bionic eye.

The only retinal prosthesis ever approved by the U.S. Food & Drug Administration was implanted in Lopez’s left eye Wednesday, Jan. 10 at Memorial Hermann. She is the first patient in Houston to undergo this surgery.

Lopez, 61, was a bundle of positive energy an hour before she was wheeled into the operating room.

“I am feeling excited, nervous and happy,” said the El Salvadoran-born Lopez, who suffers from retinitis pigmentosa, a genetic disorder that causes a breakdown of the cells in the retina.

The doctors who performed the surgery, Garvin Davis, M.D., MPH, and Amir Mohsenin, M.D., Ph.D., are the only physicians in the region authorized to implant the Argus ll bionic eye.

“There have been several centers that started offering this and then stopped because of the logistics around the support that’s required after the surgery,” said Davis, a McGovern Medical School at UTHealth ophthalmologist affiliated with Memorial Hermann and the Robert Cizik Eye Clinic. “And you really need the support of the hospital, quite frankly, because of how expensive this device is.”

The Argus II costs about $150,000. Lopez’s insurance will cover it, the doctors said.

In one month, after Lopez has healed from the surgery, Davis and Mohsenin will activate the implant, which is smaller than an adult’s pinkie nail. Lopez will wear special glasses outfitted with a miniature video camera, along with a video processing unit that can be attached to a belt, to help her see with the implant.

She is well aware that this bionic eye will not give her 20/20 vision. Rather, it will help her distinguish light from dark, help her make out the shapes and outlines of people and objects. She will learn how to see in a new way.

“The doctors tell me I will see a little—no driving or reading,” Lopez said. “But I don’t see anything so, for me, it will be a big difference. When people are blind, a little bit of sight is a lot.”

The Argus II, made by a company called Second Sight, stimulates the retina electrically to induce visual perception.

“It’s a different form of vision than what we’re typically used to as sighted individuals,” said Mohsenin, also a UTHealth ophthalmologist affiliated with Memorial Hermann and the Cizik Eye Clinic. “We’re essentially bypassing her degenerated retina and using the parts that are still intact to connect to her brain.”

The device is designed for patients ages 25 and over with outer retinal degeneration.

“You have to really be barely able to perceive light if we flash a bright light in front of you,” Davis said. “Other than that, the vision isn’t poor enough to justify the surgery.”

Davis said to think of the bionic eye as a camera.

“With a normal eye, the image comes in, hits the retina—which is the film of the eye—gets processed, and then the signal goes to the brain,” Davis said. “In this case, with Lidia, she still has the connection from her eye to her brain. What we need to do is stimulate the retina to enable her to see in a new way.”

Once the Argus ll is activated, the patient works closely with doctors and a computer programmer.

“When Lidia comes back to our clinic for her post-operative visits, we will work with a computer programmer and we’ll program her device, with her input, into what she can see,” Mohsenin said. “So with time, she will learn to interpret those visual stimuli and see what they are. Mainly, contrast is what she’ll be able to see the most—a black picture frame against a white wall. She’ll be able to see the outline. As the training progresses she will continue to improve, and with software upgrades it will get better, as well.”

Almost all patients outfitted with the bionic eye can at least perceive light, the physicians said. The best patients are able to recognize large letters.

“It’s very important to get these devices into patients early,” Davis said, “because even though there is so much science behind them, the art comes from patient feedback. They can improve the technology based on patient responses.”

California-based Second Sight Medical Products was founded in 1998; clinical trials for the Argus I began in 2002. The Argus ll was approved by the FDA in 2013.

Mohsenin and Davis hope to implant four or five bionic eyes a year. The waiting list to receive the Argus II, they said, is significant; patients have been calling the company to find out where they can get the surgery.

Lopez, who lives in Houston, has wanted a bionic eye for years. She hopes it will help her regain some independence.

“She can’t travel by herself anymore,” said Lopez’s daughter, Victoria, who brought her mother in for the surgery Wednesday morning. “Six or seven years ago she was still able to go to the Y, but she can’t even do that anymore. … After the surgery, she’s hoping that, even with a cane, she can walk around on her own somewhere outside of her house. Right now, she has to hold onto my hand. That’s the way for her to move around.”

Lopez also has two grandchildren—Victoria’s sons—who have grown quite a bit since she lost her vision.

“My youngest is going to be 15,” Victoria Lopez said. “And I have a 20-year-old. Now, my mother doesn’t see their faces. So even just a little outline of their faces would be nice.”