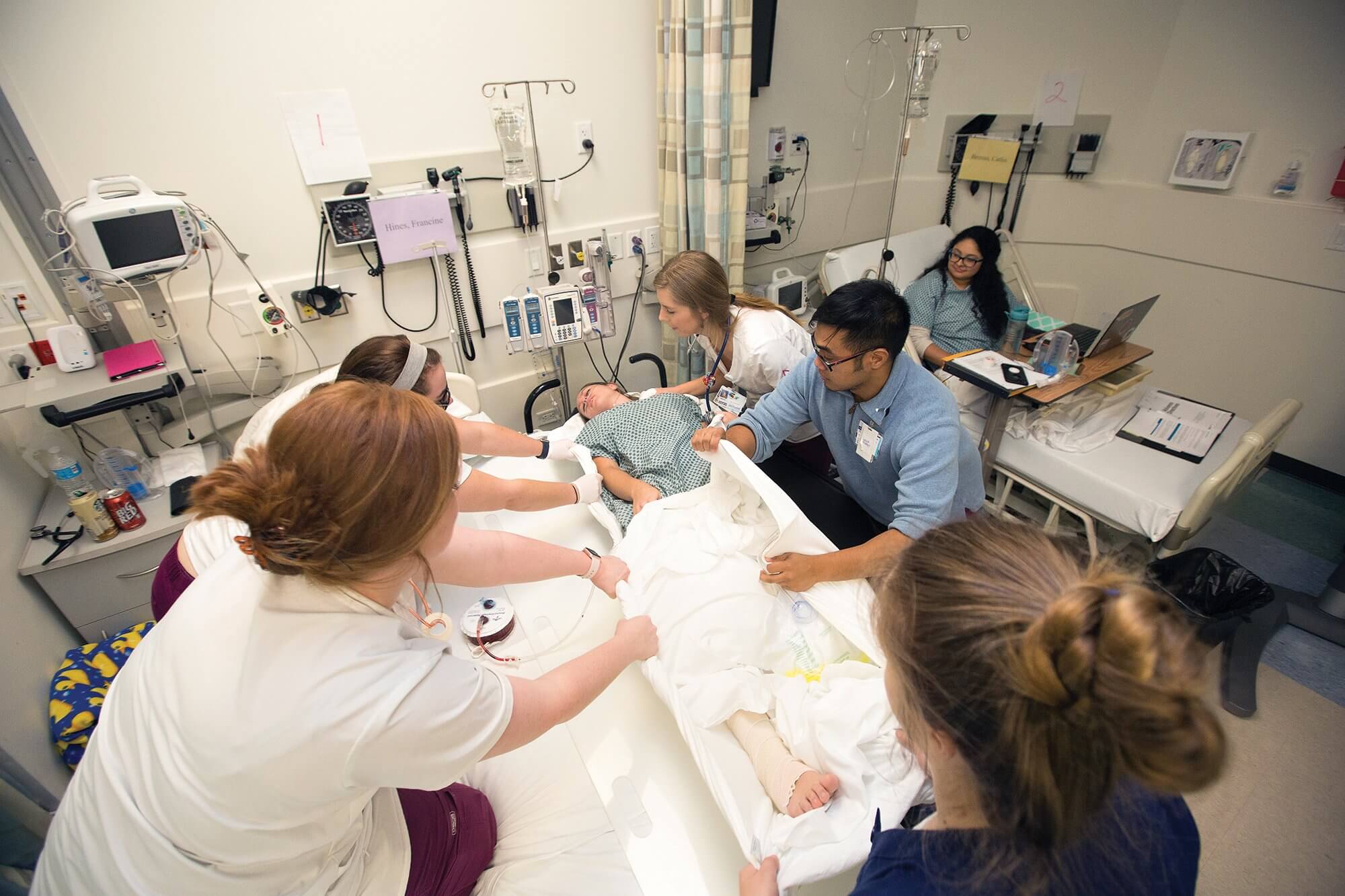 Francine Hines is calling out in pain and asking for her family. “Why does it hurt so bad?” she groans. “Please, where is my daughter?”

Last week, Hines underwent a total hip replacement and was transferred to a nursing home where she fell and dislocated her new hip. She was brought to the ICU and is currently being transferred to another wing in the hospital. All around her, nurses are scooting IV poles, shuttling meds and checking IDs. It’s highly-organized chaos, reminiscent of all busy hospital units.

The scenario is part of an immersive 72-hour simulation training created at Texas Woman’s University College of Nursing. Modeled after a program designed by NASA educators during the space shuttle era, this integrative training is one-of-a-kind and runs around the clock.

Nursing students nearing graduation work three 12-hour shifts beginning at either 6 a.m. or 6 p.m., and, just like a real hospital, are called on to juggle complex, multi-patient scenarios that require critical thinking. At a time when increased litigation and a narrowing focus on patient interaction has all but eliminated opportunities for nursing students to gain hands-on experience, this program offers a place for students to hone their skills, ask the right questions and most importantly, fail safely.

“This is where you want them to make mistakes. You don’t want them to make them in the real world, so let’s catch them here,” explained Andy Foster, a former astronaut instructor whose input shaped TWU’s program. “The whole idea is to really push the team, everybody on it, and find out what do you really know and what do you not. And then deal with the real-world consequences of all that, because that’s what’s going to happen in a hospital.”

The idea for this type of training started seven years ago when Foster’s wife, Connie Ayers, Ph.D., RN, an associate professor at TWU’s College of Nursing, noticed that her students were given fewer and fewer opportunities to practice their clinical skills in the hospital. Final semesters were too often spent passively shadowing preceptors—nurses or advanced care providers already in the workforce. Ayers, a veteran nurse and educator, was concerned.

“Clinical experiences were getting more observational in nature because of the patient safety climate and legal aspects of care, and it was no longer prudent for nurses to allow students to have full decision-making authority,” Ayers said. “I was talking to Andy and asking him, ‘How could we get those same kinds of experiences that provide decision-making opportunities and the opportunity to make a mistake and learn from that?’”

Foster explained that multiple teams and organizations were involved in each space mission, in addition to the astronauts who were trained exhaustively on all parts of the shuttle system and orbital stations. All those people and organizations needed to learn to work together before blast-off, so the group always had a comprehensive dry run.

“You picked the most critical 72-hour part of the mission where your primary mission objectives are being executed and you ran it around the clock, just like you would for the real thing,” Foster said. “That integrative simulation where you have all the different facilities is the one that gives you the really big picture.”

Ayers took the idea and ran with it. It was a time-consuming project with an overwhelming number of moving parts, but with help from Foster and Teresa Maharaj, Ph.D., RN, an assistant professor at TWU’s College of Nursing, Ayers created an entire hospital ward from scratch, and designed patients, too. Amid real hospital beds, IV pumps, wound care carts and the incessant beep of monitors, nursing students immersed in the simulation treat fellow students acting the parts of patients—a homeless man in need of a toe amputation, a patient with PTSD, an individual going into hospice care, a drowning victim, a woman with a postpartum hemorrhage, patients with varying religious beliefs that impact treatment decisions and ethical conundrums, all with competing demands to mimic real life. The team also created accompanying medical records to support the scenarios, complete with full histories, medication information and diagnoses.

“It has all the characteristics of the hospital environment—patients come and go from surgery, they get admitted, they get discharged, they have orthopedic surgery, family members are here,” Ayers said. “We’ve had chaplains, social workers—everything that would happen happens. It’s 24 hours a day and it gives them that reality of being on their own in a hospital environment.”

The students acting as patients get their direction from more than 100 pages of intricate scripts crafted by Ayers and her team. Contingencies are written into the pages like an if-then flowchart and are determined by the treatment decisions the nursing students make in real time, including any mistakes. Sometimes, Ayers and her colleagues have to whisper into the ears of the students playing patients to tell them their nurse made an error and to proceed with a certain scenario.

During a recent simulation exercise, a nursing student administered too much morphine to her patient. The instructors directed the student playing the patient to become drowsy and difficult to arouse so that the nursing student would realize the mistake on her own. The nursing student had to play out the scenario by speaking to a provider about the error, ordering and administering an antidote and filling out an incident report.

“She was visibly shaken,” Ayers said. “It really created quite a learning experience for her.”

It was an invaluable opportunity to learn from failure with no harm done to the patient. That nursing student will likely never make a mistake with morphine again.

Foster summed it up perfectly: “At NASA, you never tried to purposely kill the crew, unless they hadn’t learned something that would kill them.”

That ability to fail in a real-world environment without real-world consequences is what makes the program so unique.

“The model that we use nowadays, where we place students with a preceptor in the hospital, the preceptor is so into her own job that she doesn’t really talk to a student as an instructor might. So they’re not thinking through things, they’re not saying, ‘Well, we’re going to hang this IV and this is how you hook up the tubing and this is the reason we hook up the tubing this way,’” explained Maharaj. “The students in the SIM, they’re actually having to do it. They’re having to fumble through it and work through and critically think, ‘How am I giving this IV push? How fast am I giving it? How fast am I supposed to give it?’”

“I think the beauty of that is that it causes self-reflection, which is so critical,” added Wayne Brewer, PT, Ph.D., MPH, assistant professor and professional program coordinator for TWU’s School of Physical Therapy.

The simulation training invites students from other disciplines to participate, including those on physical therapy, nutrition and health care administration tracks. The scripts are tweaked to require their expertise.

“Every accrediting body for a health care-based field requires inter-professional education now, some interaction between disciplines,” Brewer said. “This is so real that it’s no longer just a class, but it’s like we’re actually going over real cases. And the debriefing is a chance to learn what everyone does, which I think is phenomenal. The PT students don’t really get a chance to know what nursing does, and vice versa, until you actually sit down and share knowledge.”

The professors also enlist support from outside agencies, including the Medical Examiner at the Harris County Institute of Forensic Sciences and an ethicist from The University of Texas MD Anderson Cancer Center, to make the experience that much more realistic.

“We’ll have an ethical dilemma with one of the patients; the family wants the mother to continue on with chemo and the mother wants to die, so the ethicist comes in and talks through that,” Maharaj said. “It’s pretty powerful and by the end the students are practically crying.”

In some ways, playing the patient has just as much value for the students as practicing the role of the nurse.

“The patient experience is meant to be an empathy-building experience for the students as well,” Ayers said. “It forces them to step up their game from a professionalism standpoint, which is another aspect we have to work very hard at, these soft skills, besides just the hard, clinical skills.”

Student feedback regarding the program is overwhelmingly positive. Ayers said her students came back from job interviews raving about how prepared they felt because some of the questions asked them to consider nearly identical issues they’d handled during the simulation. And although they describe the 72-hour period as challenging, it’s the first opportunity they have to be fully independent nurses, to think on their own, and to really, truly, learn.

“You jump in and you either succeed or you learn how to succeed,” said Taylor Duck, the nursing student who played Francine Hines, the elderly patient with the hip replacement. “There’s really no failing option here.”