On the Side: Fiorela Natali Hernandez Tejada and Beatriz Rozo

On the Side: Fiorela Natali Hernandez Tejada and Beatriz Rozo 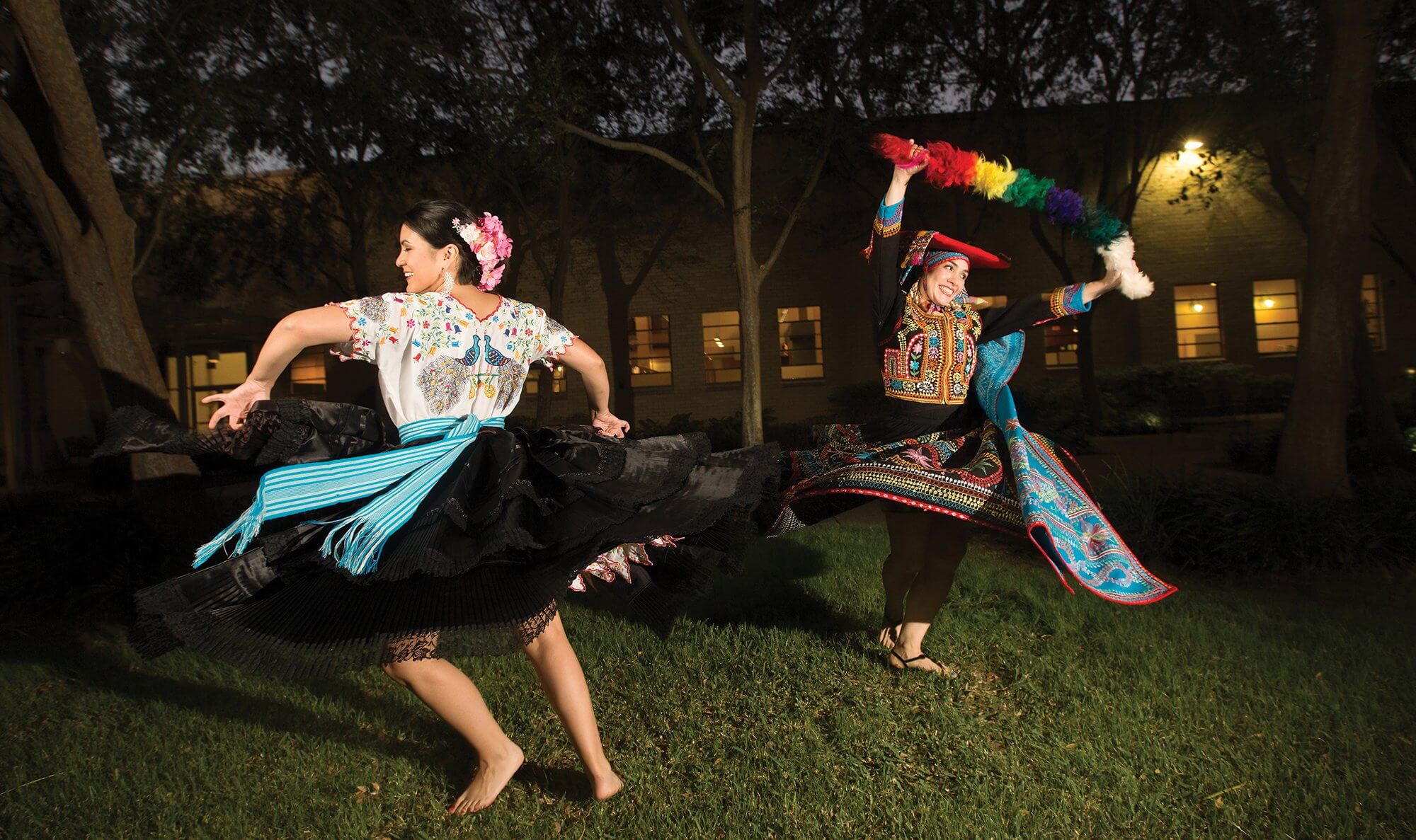 When Fiorela Natali Hernandez Tejada met Beatriz Rozo in 2014 during Tejada’s first year working in the MD Anderson Children’s Cancer Hospital clinic, the two instantly bonded over their Peruvian heritage. They connected over their shared love for Peruvian cuisine and culture, but most of all, Peruvian dance.

“She asked me if I liked to dance, and I told her that I love to dance!” Peruvian-born Tejada said with unbridled enthusiasm. “The music calls me. If you put some music on, I will dance.”

Rozo invited Tejada to join Raices Del Peru (Roots of Peru), the Peruvian dance group co-founded by Rozo’s mother in 2002. After Rozo’s parents immigrated to the United States from Peru in 1975, her mom was committed to bringing Peruvian culture to their new home and staying connected to her roots.

“[My mom] thought, ‘If I have to be here, then I’m bringing Peru to Houston!’” said Rozo, who has been dancing since she was 5 years old. “That was the way she was going to make it work.”

Every October, Raices Del Peru hosts its own Peruvian festival, but due to Hurricane Harvey, the event has been rescheduled for April 2018. The group’s mission is to share Peruvian culture with the Houston community by performing folk dances at festivals, fairs and church events, including the Houston International Festival and the State Fair in Dallas. The dances represent the different regions of Peru, which are divided into three groups: the coast, the jungle and the mountains. The movements, costumes, accessories and hairstyles vary from region to region.

“Our culture is so rich and so diverse,” Tejada said. “For example, from the coast to down south, you have Afro-Peruvian Creole music, which is very rhythmic. It’s similar to African dances because it’s inspired by the people who came from Africa to the south part of Peru.” 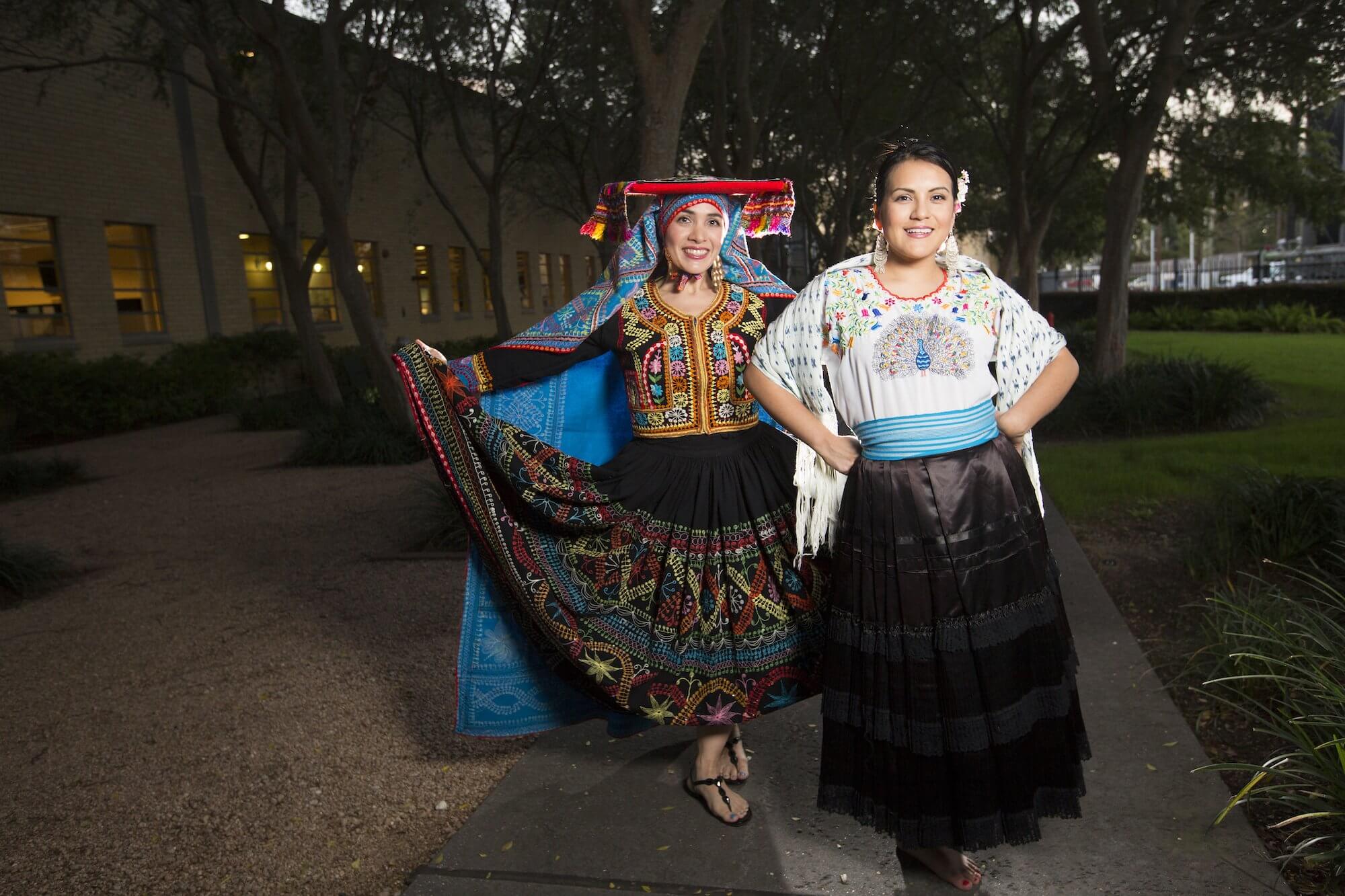 But the dance Rozo and Tejada both love is the Marinera Norteña. Similar to the Spanish Fandango, Marinera Norteña is a fast-paced, high-energy dance that tells the story of a flirtatious courtship between a man and a woman. The dance emerged during Peru’s colonial period (1532–1821), when the Viceroyalty of Peru—which included what is now Chile, Bolivia, Colombia, Ecuador and Argentina—introduced the Zamacueca, a dance that incorporates African, Spanish and Andean styles and rhythms.

As South America fought to liberate itself from Spain, the Zamacueca became a dance to celebrate independence and developed different iterations in different regions: Zamacueca became Cueca in Chile, Cueca Boliviana in Bolivia and Zamba in Argentina. In Peru, the Zamacueca adopted the name La Marinera (“the sailor”) in 1879 to honor the Peruvian Navy during the War of the Pacific. The three main variations of La Marinera consist of Marinera Limeña, Marinera Serrana and—the most popular—Marinera Norteña.

Although the dance originates from the northern coastal area of Peru, Marinera Norteña is widely considered the national dance of Peru. In this style of dance, the man is sharply dressed in a suit or poncho and polished black shoes. He also wears a wide-brimmed straw hat, which he uses as a prop. In contrast, the woman dances barefoot and wears brightly embroidered clothing with a loose, flowing
skirt. Both dancers carry a white handkerchief to wave and twirl flirtatiously to capture the other’s attention.

“I personally love it because I was born from that region. As soon as I could walk, my mom told me, ‘Okay, now you have to dance Marinera,’” Tejada said. “I’ve been dancing it since. It’s in my blood.”

While Peruvian dancing helps relieve stress and offers a fun way to burn calories, Rozo and Tejada see it as a timeless form of art and self-expression that bonds them to Peru’s history, culture and people.

“It just keeps a little bit of Peru always in you,” Rozo said. “It’s hard in the United States to keep that culture, but my mom has tried in every way to keep us connected and to remember where we came from.”