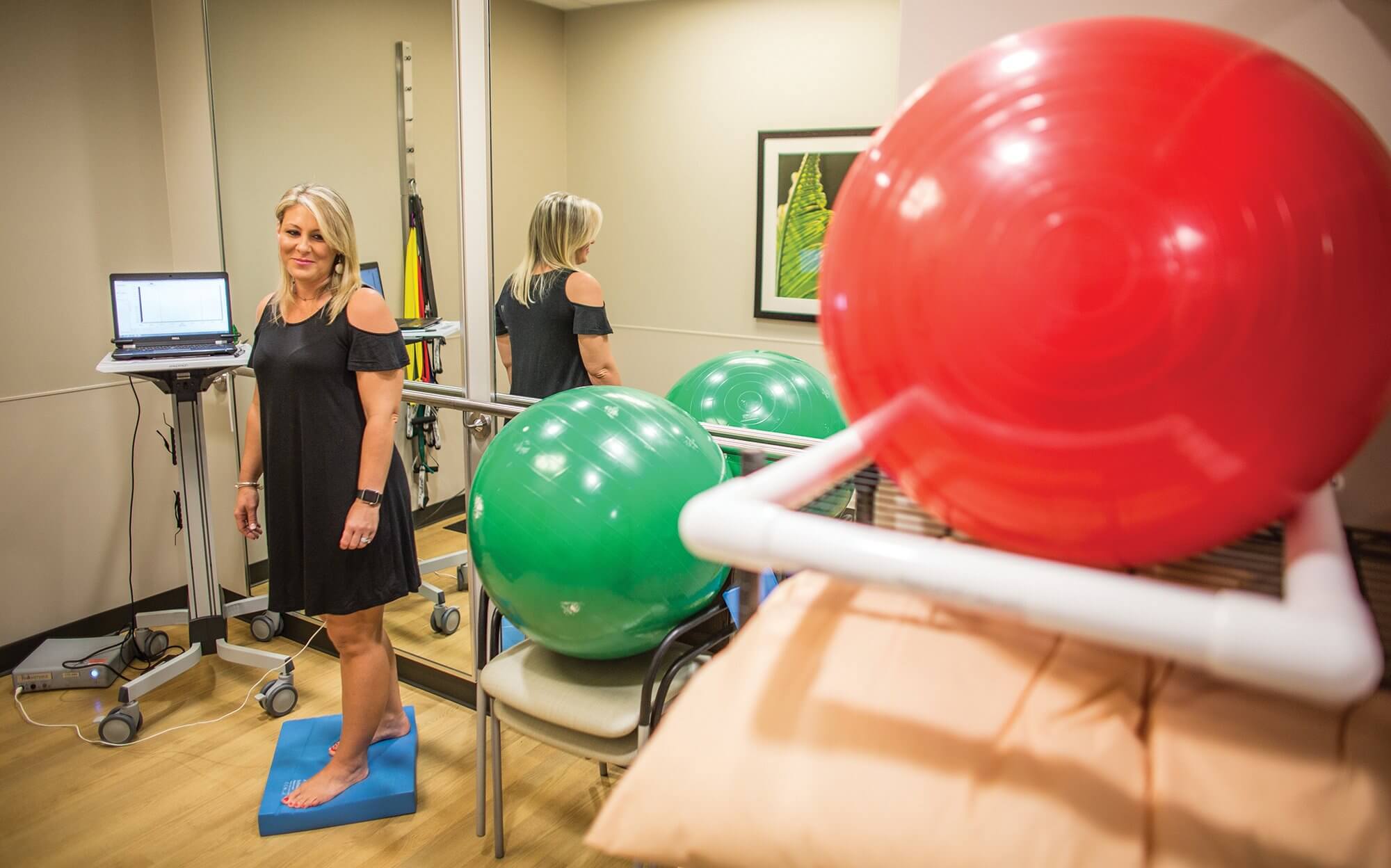 Following the birth of her second child, Vanessa Schlitzkus had horrible back pain, well beyond typical post-delivery aches. On top of that, she found it harder to control her bladder.

“A lot of times, I thought I would not be able to make it to the bathroom,” Schlitzkus said.

After running some tests, her obstetrician suggested she see Apurva Pancholy, M.D., a urogynecologist affiliated with Memorial Hermann Memorial City Medical Center and an assistant professor at McGovern Medical School at The University of Texas Science Center at Houston (UTHealth).

Pancholy told Schlitzkus that her pelvic area had not returned to its pre-pregnancy condition, hence the back pain. In addition, her uterus was showing signs of prolapse from the recent delivery, meaning the muscles underneath it were so stretched out or weak that her cervix had started to descend downward toward her vagina.

The pelvic floor is made of bone, muscle and connective tissue. Weakness in this area can lead to a prolapsed uterus, bowel troubles or other issues.

Pelvic floor weakness can be a result of pregnancy, long-term constipation, aging—even for those who’ve never had children—and genetics.

“It is an everyday quality of life issue that people deal with day in and day out,” Pancholy said. “They are buying multiple feminine pads and incontinence pads every month, and they want to know what their options are.”

People simply used to accept this condition, he said—especially women, who have almost come to expect bladder issues after having children. But this is not normal or OK, he added.

Slowly, women are becoming comfortable talking about pelvic floor issues, which could be attributable to advertisements with celebrities who admit they wear incontinence pads. These pads are now designed less like diapers and more like underwear.

Many of Zitterkopf’s referrals come from book clubs and from women who received treatment for pelvic floor weakness in other countries.

“This is a standard of care for women, especially in France,” Zitterkopf said. “When you have a baby, you have pelvic therapy. We are not quite as evolved as France, and they tell me stories of having to argue with their doctors to be referred here for care.”

Men also suffer from pelvic floor disorders, including urinary and bowel issues, that are a result of weakened pelvic muscles.

“Men are probably the most dedicated patients we have,” Zitterkopf said. “Ladies get used to their menstrual cycle and wearing pads, but men are not as accepting of why they are leaking, so they do their exercises.”

Schlitzkus first started seeing Zitterkopf and her team at an office in West Houston. But in October 2016, Zitterkopf and Pancholy relocated to Memorial Hermann-Memorial City Hospital to operate out of its new pelvic floor unit—the first of its kind in the area that is dedicated to pelvic floor disorders.

The 4,200 square-foot center features private therapy rooms, a noninvasive nerve stimulation room, and dedicated male and female dressing areas, including warm robes for those needing a procedure. The space houses urogynecologists like Pancholy, as well as OB/GYNs, colon and rectal surgeons, gastroenterologists and urologists.

The new space allows for more privacy and more innovative treatment solutions, Zitterkopf said. Those include chairs to monitor bowel movements and a biofeedback machine that helps patients learn how to strengthen their muscles, track which ones they are using, and if need be, receive electric stimulation that causes the muscles to contract so the patients can feel how the muscle is working.

“Much of the physical therapy has been turned into games … patients even call it a gym,” she said. “They learn to squeeze and contract the muscles by making a rose bloom or docking a space shuttle.”

Patients also learn techniques to do at home, the most common being Kegel exercises and breathing exercises, to decrease the pressure that is being put on the pelvic area.

And new treatments are becoming available. In addition to medication, treatments include Botox for the bladder. Pancholy is also looking at new research on neurostimulation, which stimulates the nerves to control the bowel or bladder. It is similar to treatments he is currently using, but less invasive.

“Patients are doing well with this, and the outcomes are good,” Pancholy said. “As a physician, we are happy to have this option because it used to be just physical therapy, medication and surgery.”

Meanwhile, Schlitzkus recently passed her evaluations and she no longer needs the physical therapy.

“In one way, it’s great because I am healed,” she said, “but in another, it’s kind of sad because I have been going once a week for the past two years.”

The therapy helped her utilize her pelvic muscles, which initially took concentration to do, but now she is able to engage them without thinking. She said she is continuing with the exercises to keep the pelvic muscles strong and to help with bladder control.