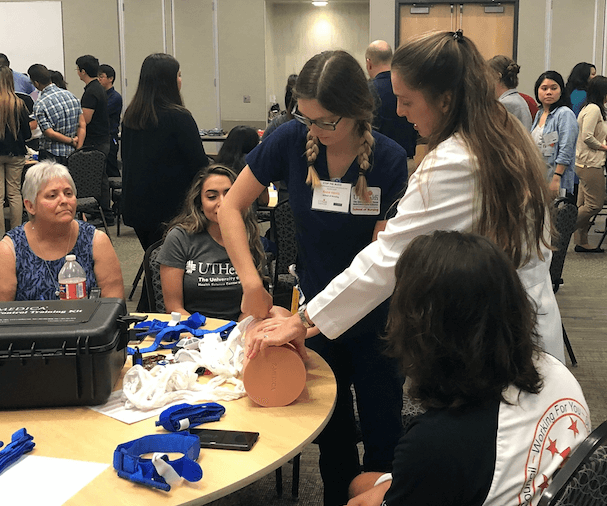 The University of Texas Health Science Center at Houston (UTHealth) recently hosted a “Stop the Bleed” event to train students how to respond in emergency situations.

Stop the Bleed is “something that was born out of some tragic incidents; it originally started being discussed after the shooting at Sandy Hook Elementary” said Sasha Adams, M.D., assistant professor in the department of surgery at McGovern Medical School at UTHealth and surgeon at Memorial Hermann Red Duke Trauma Institute. “When you looked at the deaths from the Sandy Hook s hooting, some of the people died immediately, but a lot of them died over the coming hours before it was safe enough for medical personnel to get in there. … If we could have stopped them from bleeding before the EMTs got there, then maybe we could have stopped them from dying.”

Because it is not safe and often not possible for EMTs to be on scene immediately in an active-shooter/attacker situation, UTHealth welcomed 80 students from all six UTHealth schools in Houston to learn how to recognize life-threatening bleeding, pack wounds and apply tourniquets.

“We all vaguely know about a tourniquet, but we’ve never felt it and we’ve never seen it and we haven’t actually had to think through it,” said Lauren Leining, an epidemiology student at UTHealth’s School of Public Health. “I think being able to have this learning experience in an environment that we are all comfortable in, we will be able to apply this to an emergency situation when we are experiencing shock and it will allow us to think a little bit more clearly when the time is critical.”

The students also packed 150 Stop the Bleed kits that will be placed in the automated external defibrillator (AED) boxes around UTHealth buildings.

“In working with our department of emergency medicine faculty, it has become clear that in these traumatic injury events, if we have the availability of these kits that have tourniquets and packing gauze, that survivorship can be improved,” said Robert Emery, DrPH, vice president of safety, health, environment and risk management at UTHealth.

Similar kits are available to purchase commercially, but Emery points out that they are not streamlined. Adams and her team suggested items to place in the kits based on what she and her trauma team deemed most necessary—including two tourniquets, hemostatic gauze, scissors, gloves and a mask. There are currently 128 AEDs around the UTHealth campus, but Emery points out that even if you have an AED present, it is not useful if no one knows how to use it.

“Having these supplies is only part of the story. Having the knowledge of how to apply them is equally important,” Emery said. “Its an unfortunate fact of life, but because all of the folks here are in the health professions, it is our obligation to know how to respond in these kind of situations and hopefully these people will turn around and help others know about it, as well.”

Although the event was capped at 80 students, UTHealth plans to offer the certification course on a quarterly basis to welcome additional students. For those who could not attend the event, Adams offers the following tips to improve survivorship and handle an emergency situation.

The ABCs:
• A—Alert: call 911 for help or designate someone else to call.
• B—Identify bleeding: find the bleeding and figure out how to stop it.
• C—Cover the wound.

Things to think about in a trauma situation:
• Make sure that you are safe first—you do not want to put yourself in harm’s way.
• Make sure that the scene is safe, particularly if you are in an active-shooter situation.
• Protect yourself from blood-borne infections—you will want to have gloves.
• If you have a tourniquet, you go high, and apply it only on an arm or a leg, avoiding all joints.
• When you are packing a wound, use hemostatic gauze if you’ve got it, any kind of gauze after that. If you don’t have those, any kind of cloth—clean is better, but if you don’t have it, go with whatever you have. The goal is to stop bleeding.
• Once you have a fabric to pack the wound with, you want to actually stuff the fabric down into the wound as tight as you can. When you put it in, you go as deep as you can, as tight as you can and then you hold pressure on top of it.