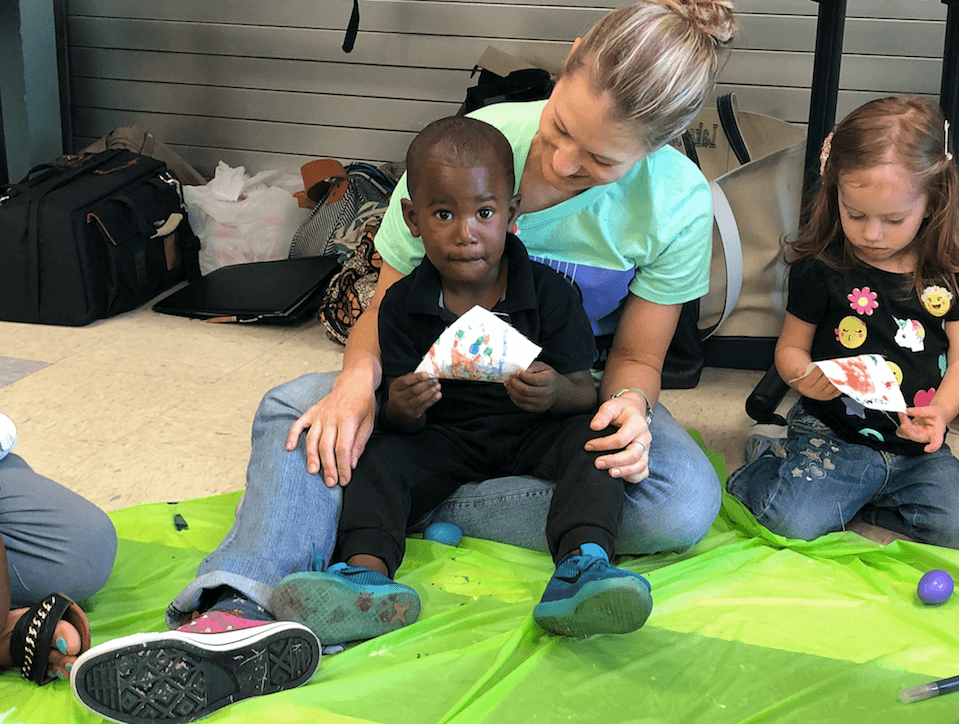 In the wake of Hurricane Harvey, which made landfall nearly three months ago, many Houstonians and Texans are still recovering and getting back to their normal lives. To help take their minds off of the stress, creative arts therapists from across the Texas Medical Center partnered with community artists and facilitators to host the first Harvey Healing Day for nearly 100 men, women and children who were displaced by Hurricane Harvey.

“In our monthly creative arts therapy meeting shortly after Harvey, we discussed who had been affected, what efforts we knew of taking place in the TMC, and of course, what we could potentially do with our specific skill sets and passions to help in the relief efforts,” said Marial Biard, a board-certified music therapist at Texas Children’s. “Knowing that we wanted to provide healing efforts to those members of our community most impacted, we brainstormed what it would look like to create a series of days targeting displaced Houstonians, first responders, and communities still healing.”

In their daily roles, creative arts therapists work alongside doctors, nurses and clinicians to heal their patients through singing, dancing, playing music, drawing, painting and so much more.

“We endeavored to facilitate positive forms of emotional expression and coping,” Biard said. “Partnering closely with American Music Therapy Association and Red Cross Disaster Relief Response we gained specific training and knowledge about what ‘pop-up’ workshops in shelters, community centers, and first responders stations would look like. We then utilized three forms of creative expression–art making, music, and movement, to assist with verbal and non-verbal processing while also providing an overall positive atmosphere.”

Throughout the day, visitors rotated between stations set up at the Salvation Army Shelter on McGowan. They learned how to play the ukulele, they danced, sang songs and played the drums. Each visitor also used colorful markers to draw their stories on cloth squares that will be hung on a tree to commemorate the anniversary of Hurricane Harvey next August.

“One of the most profound moments of the day for me was seeing a young mother and her child walk into the hall looking tired, confused and distrusting of the excitement happening around them,” said Jennifer Townsend, program manager of music therapy for the Center for Performing Arts Medicine at Houston Methodist. “Then seeing them smiling and hugging facilitators as they lingered around the hall when the event had ended. This scene was repeated over and over again throughout the day and demonstrate the great power of the work that took place during the 90 minutes event.”

Townsend pointed out that it was not only the attendees who were seeking respite from the toll Harvey had taken on them.

“Another aspect that was very humbling for me was the realization that the group of facilitators was comprised of people recovering from their own traumas related to Harvey,” she said. “The power of volunteering seemed to provide a particular type of healing and community for those of us leading the sessions.”

This was the first of four Harvey Healing Days to be held by the creative arts therapists. Their next event will be held in early December for first responders who saved numerous lives during and after the hurricane.

“The inaugural day was a huge success and it made the hours, resources, and lack of sleep all well worth it,” Briard said. “We are incredibly grateful that our city remains full of life and hope after devastating loss, and humbled in the small way we are helping keep the great city of Houston that way, #HoustonStrong.”