A New Way Into the VA

A New Way Into the VA 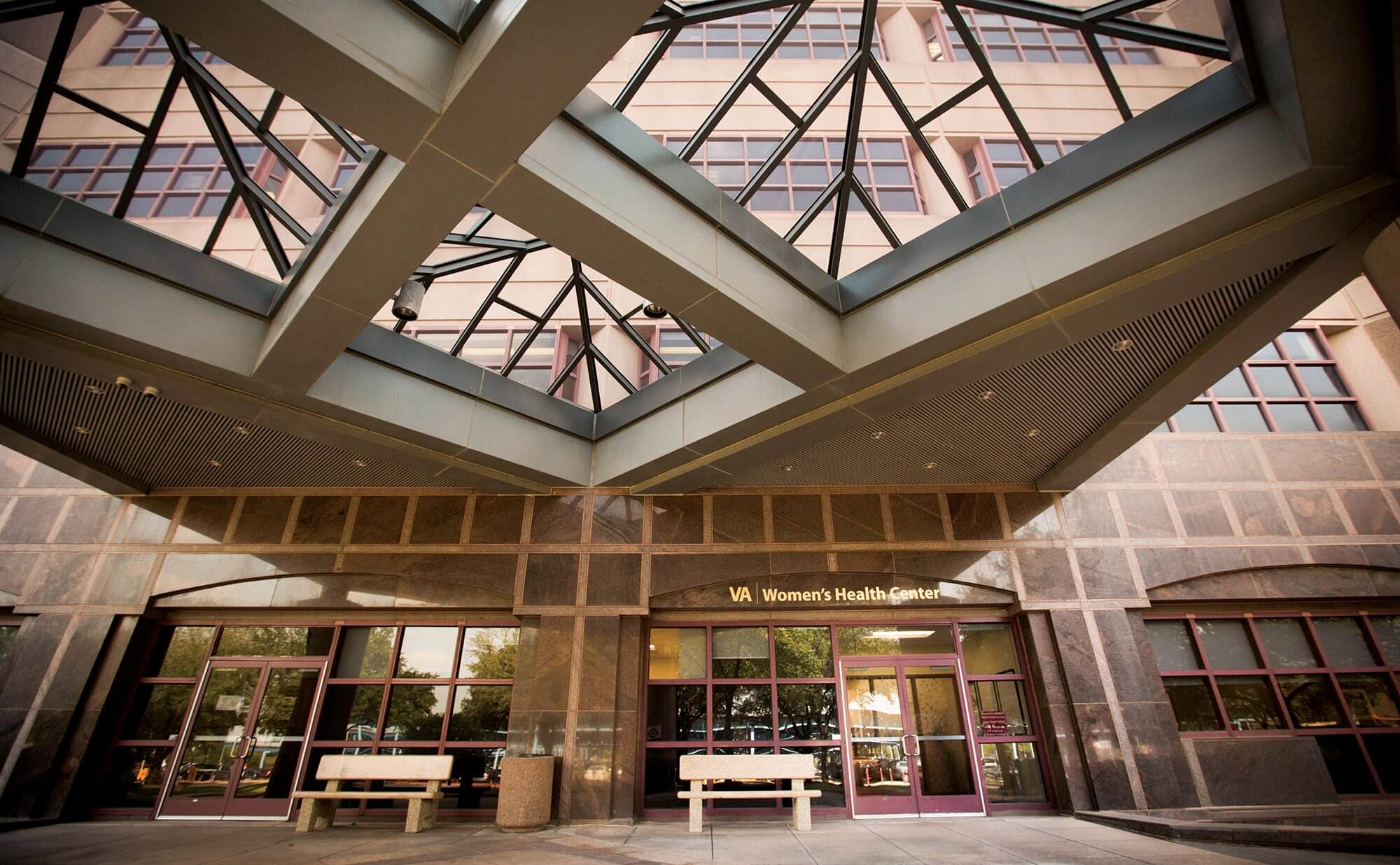 Houston is home to 14,000 women veterans, a number that has doubled in just 10 years.

“Texas, overall, has the largest number of female veterans in the nation, but the majority do not seek care at the VA,” said Rola El-Serag, M.D., medical director of the Women Veterans Health Program at the Michael E. DeBakey Veterans Affairs Medical Center Houston. “Our goal is to improve that number. Women need to get the message that the VA is on the ball, that we are attending to their needs and changing the culture.”

A new designated space for women on Houston’s sprawling, 118-acre VA campus is evidence of this cultural shift.

Last summer, the VA opened an 8,200-square-foot Women’s Health Center—more than double the size of the former women’s clinic on site. Completed in January, the center is designed to be sensitive to the population it serves. Within a massive complex that mostly caters to male patients, the Women’s Health Center provides a safe, intimate space for women.

“Predominantly, the VA is a man’s world,” El-Serag said, “but women veterans have unique needs that are distinct from their male counterparts. For example, 23 percent of female veterans report that they experienced sexual trauma in the military. A good percentage of them will develop post-traumatic stress disorder (PTSD) because of that.”

According to the American Psychological Association, female veterans who were sexually assaulted are more prone to develop PTSD than other women who experienced combat and are much less likely than other PTSD sufferers to seek help.

With this in mind, the Women’s Health Center offers its own entrance at the VA, so every female patient who visits walks into an environment that offers privacy and security.

“Having a place with a private entrance makes these women feel important and reduces their stress,” El-Serag said. 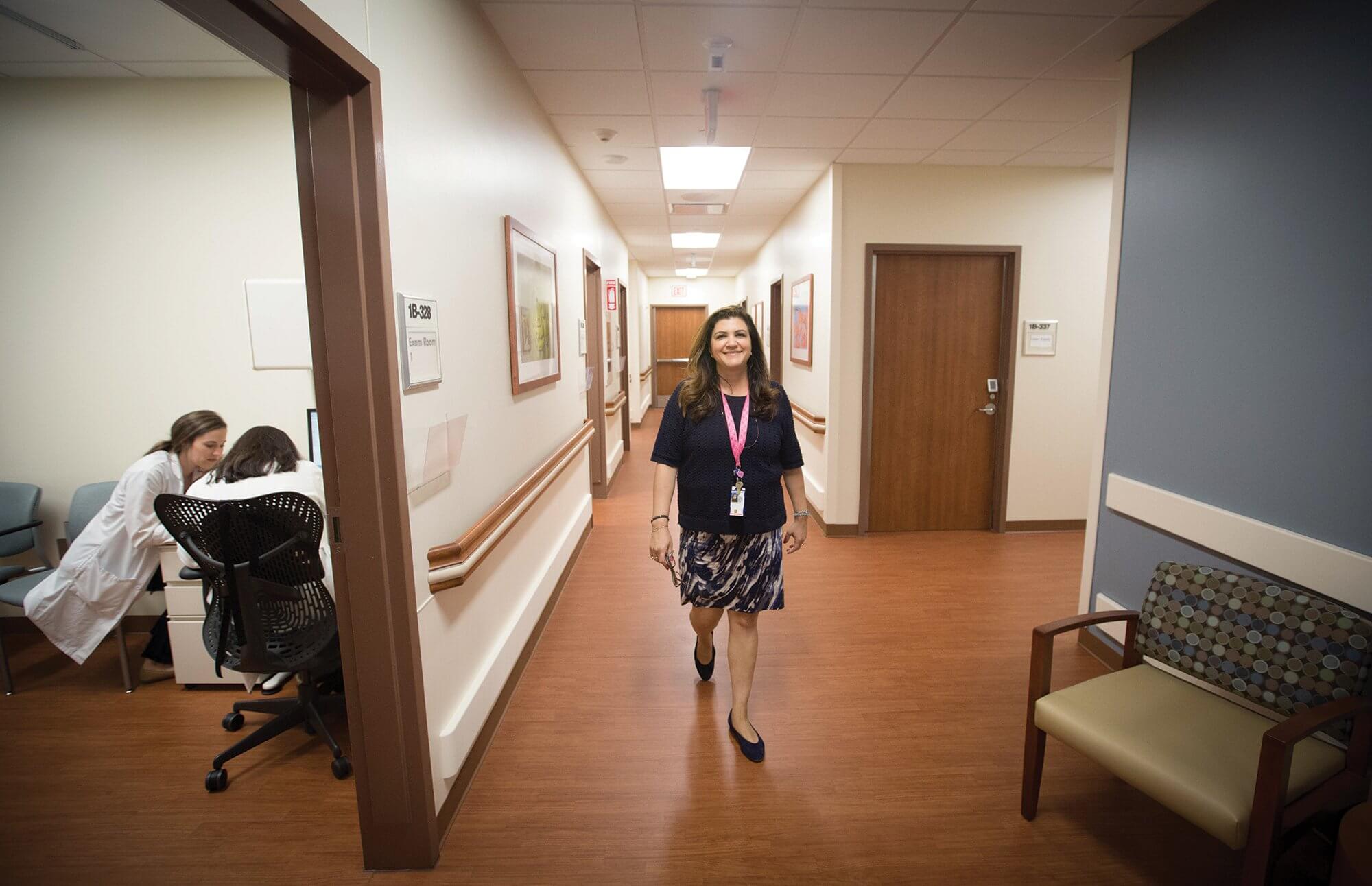 Rola El-Serag, M.D., walks through a suite of rooms at the Women’s Health Center.

In the waiting room, decorated in soothing blues and beiges, photos of daisies and branches in bloom hang on the walls. A check-in kiosk helps the flow of patients; individuals can sign in and look at their lab results or refill their prescriptions. At one end of the waiting room, the Kids Zone offers activities for children who tag along with their mothers.

“I’ve been here 14 years,” El-Serag said. “Women with PTSD exhibit avoidance behaviors. They’re no-shows to appointments. They only walk in when they need to. Continuity is important. These women need support and reassurance. They don’t trust that easily.”

Among the most prevalent primary service-connected disabilities for women veterans are PTSD, major depressive disorder, migraines, cervical strain, bronchial asthma and degenerative arthritis of the spine, according to the National Center for Veterans Analysis and Statistics. The Women’s Center treats a lot of medical conditions clustered around PTSD, including chronic migraines, irritable bowel syndrome, fibromyalgia, mood swings, excessive anger and acting out.

Every veteran must deal with the trauma of active duty, El-Serag said. Ignoring it simply doesn’t work.

The Women’s Health Center employs a staff of about 30, including doctors, nurses, radiologists, mammography techs and administrators. Different teams work with specific groups of patients, including the transgender and LGBTQ communities. The big challenge is to encourage women veterans to make use of the center’s services, and to keep them coming back for follow-up visits and routine care.

Marlene Cano, RN-BC, breast care coordinator at the center and acting Women Veteran’s Program Manager, explained that the VA leads the nation in breast cancer screening rates. She oversees that outreach in Houston, making sure patients are notified of routine screenings and additional services.

“We see a whole lot of women in their twenties and thirties,” El-Serag said, “and they don’t want to spend all day at the VA.”

So the center aims to streamline patient care, managing problems or complications as soon as they arise. Offices are clustered inside the center to make it easy for the care team to communicate and for patients to move between them. Often, a patient will come in for a physical examination and the doctor will identify depression or PTSD.

“If we identify a mental health need, we can see the patient on the same day,” said Alison Sweeney, Psy.D., a psychologist on staff. Similarly, the breast center within the Women’s Health Center can respond to an inconclusive mammogram right away, by offering an ultrasound. That way, patients are relieved of the stress of waiting weeks to find out whether or not they are facing a serious health problem.

“We have a same-day model,” explained breast radiologist Mahdieh Parizi, M.D. “If we see an abnormality, we work up everything on the same day.” 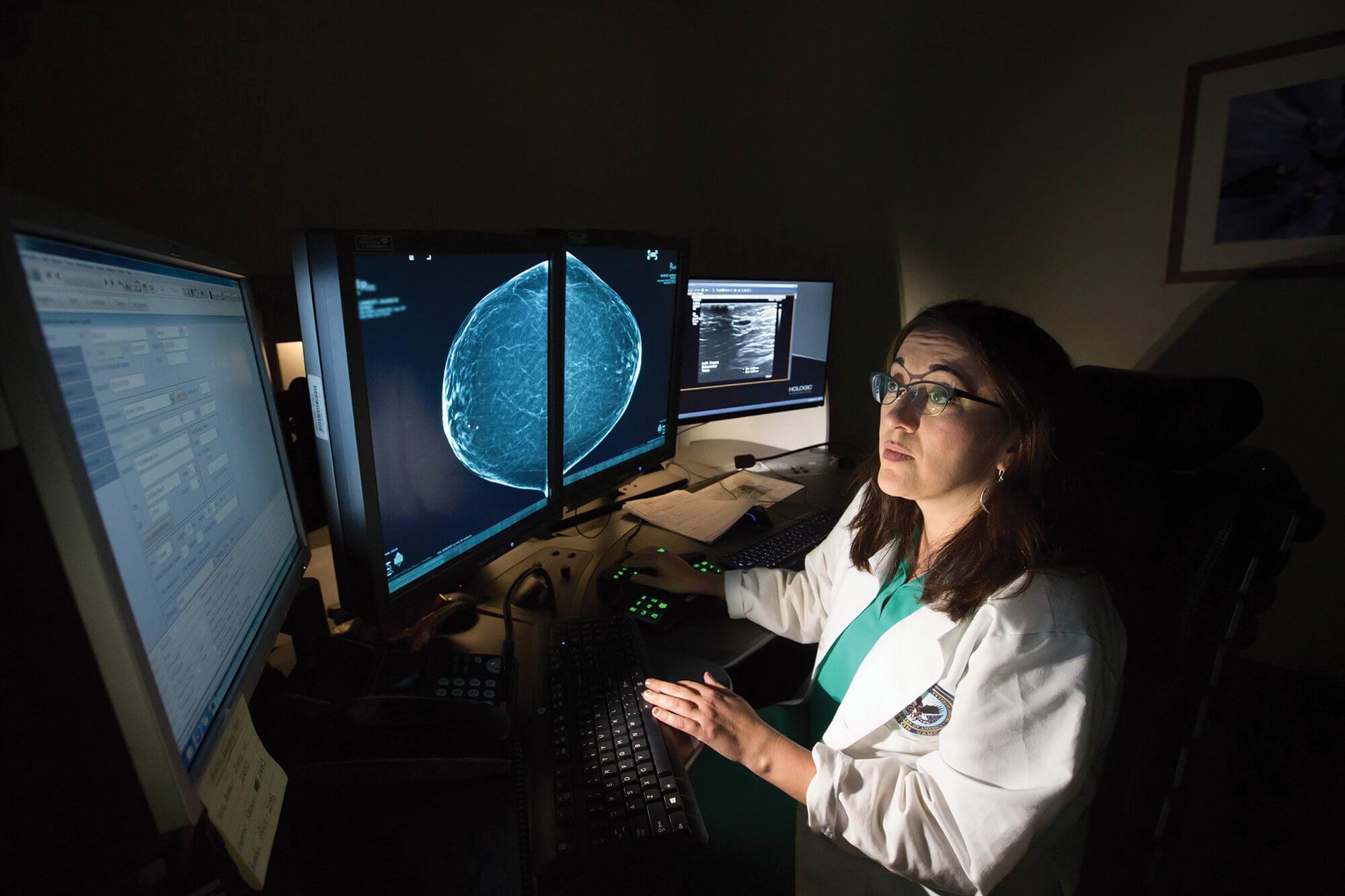 And sometimes the smaller details—including the plush pink robes women are given while waiting for breast examinations or other types of breast care— go a long way toward making patients feel cared-for and comfortable.

Since the Women’s Health Center has been up and running, it has also become an academic hub for women’s health in Houston.

“It’s wonderful,” El-Serag said. “Students and doctors are coming to the VA to learn about women’s health.”