The Test Kit Uses a Smartphone to Test for Kidney Inflammation 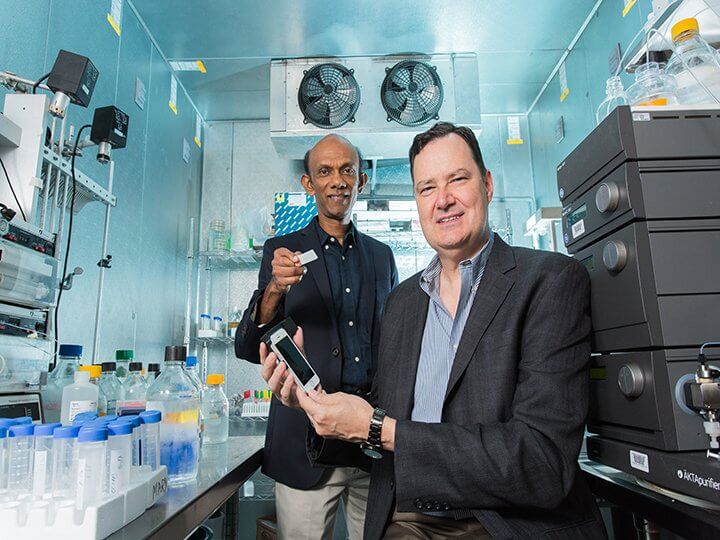 With a four-year $1.4 million grant from the National Institutes of Health (NIH), two University of Houston engineering professors are developing a home test kit for kidney nephritis, or inflammation, in patients who have Systemic Lupus Erythematosus.

Chandra Mohan, Hugh Roy and Lillie Cranz Cullen Endowed Professor of biomedical engineering, is uncovering new urinary biomarker candidates for lupus, an autoimmune disease that leads to chronic inflammation in multiple organs, including the kidneys. Using that information, Richard Willson, Huffington-Woestemeyer Professor of chemical and biomolecular engineering and professor of biochemical and biophysical sciences, is creating a smartphone-based app and test kit prototype based on the technology underlying home pregnancy tests.

To Willson, the technology of the home pregnancy test is almost mystical in its promise.

“The home pregnancy test format is one of the most remarkable technical developments that anybody ever made,” said Willson. After all, he said, you can buy them inexpensively and they allow people – at home, with no medical training – to measure human chorionic gonadotropin (the pregnancy hormone) with high reliability, at parts-per-billion concentrations.

Willson is taking this a step further, creating a test for candidate biomarkers of kidney inflammation, using a smartphone to take pictures of the sample test and a custom smartphone app to read the results quantitatively.

Approximately 1.5 million people in the United States have lupus, according to the Lupus Foundation of America. Those of African, Asian, and Native American descent are more likely to develop it than are Caucasians and 90 percent of those with the disease are women.

“The population that is underserved by medicine is disproportionately affected by lupus, making it largely a disease of the underserved,” said Willson noting that providing treatment and mitigating health risks in underserved communities is a growing focus of the UH Health.

Nephritis flares are often hard to recognize because their symptoms often masquerade as something else. A sufferer might think they have a cold or the flu, or are just tired.

“With this home test, they can know for sure and go get thoroughly investigated and treated,” said Willson. That immediacy is no small thing, according to Mohan, who used to be a practicing physician.

“The largest cause of death and severe disease for most patients with lupus is involvement of the kidneys,” Mohan said.

Samantha Stanley, a graduate student in the Mohan laboratory has been researching and validating specific proteins in the urine of lupus patients who developed kidney disease, laying the groundwork for this unique research. (Not coincidentally the kidneys make urine so that’s a good place to go to get the information.)

The traditional test for renal involvement is biopsy sampling of kidney tissues, but it is invasive and cannot be repeated frequently. That’s when Willson pivoted to thinking about the home pregnancy test format.

“The current technology is basically a yes/no system and not quite sensitive or quantitative enough,” said Willson. Proteins that are candidate nephritis biomarkers are naturally occurring in the body, but they are elevated when you have nephritis, so their test had to indicate protein levels.

The test uses glow-in-the-dark nanoparticles to detect those levels, an idea that came to Willson one night while putting his young daughter to bed. He removed one of the glow-in-the-dark stars on her ceiling and brought it to a graduate student working in his lab, Andrew Patterson. Patterson worked to fashion a test stick with the strontium aluminate nanoparticles inside, decorated with antibodies to target proteins.

In the presence of the target of interest, the particles accumulate in a line like the particles in a pregnancy test. For sensitive, quantitative analysis of the test, the researchers created a slip-on iPhone accessory to hold the test stick while the iPhone camera takes multiple shots of the particles through a custom app. The brighter the nanoparticles, the higher the levels of the target protein. It turns out the photos can measure the particles accurately, and the app can deliver results instantaneously.

Early versions suggest the idea works; the NIH grant will be used to further refine the work.
“We have already published reports showing this technology is about 100 times as sensitive as a regular test, and measuring brightness with a phone is quite quantitative,” said Willson. “Now that we are both sensitive and quantitative, we can potentially measure the lupus nephritis markers.”

Claudia Pedroza, associate professor at the UT Health Science Center Houston and a biostatistician, is collaborating with the team, as are UH Assistant Professor Jakoah Brgoch, a phosphor chemist, Research Associate Professor of Chemical and Biomolecular Engineering Katerina Kourentzi and Sanam Soomro and Heather Goux, graduate students in biomedical engineering and biochemistry, respectively.