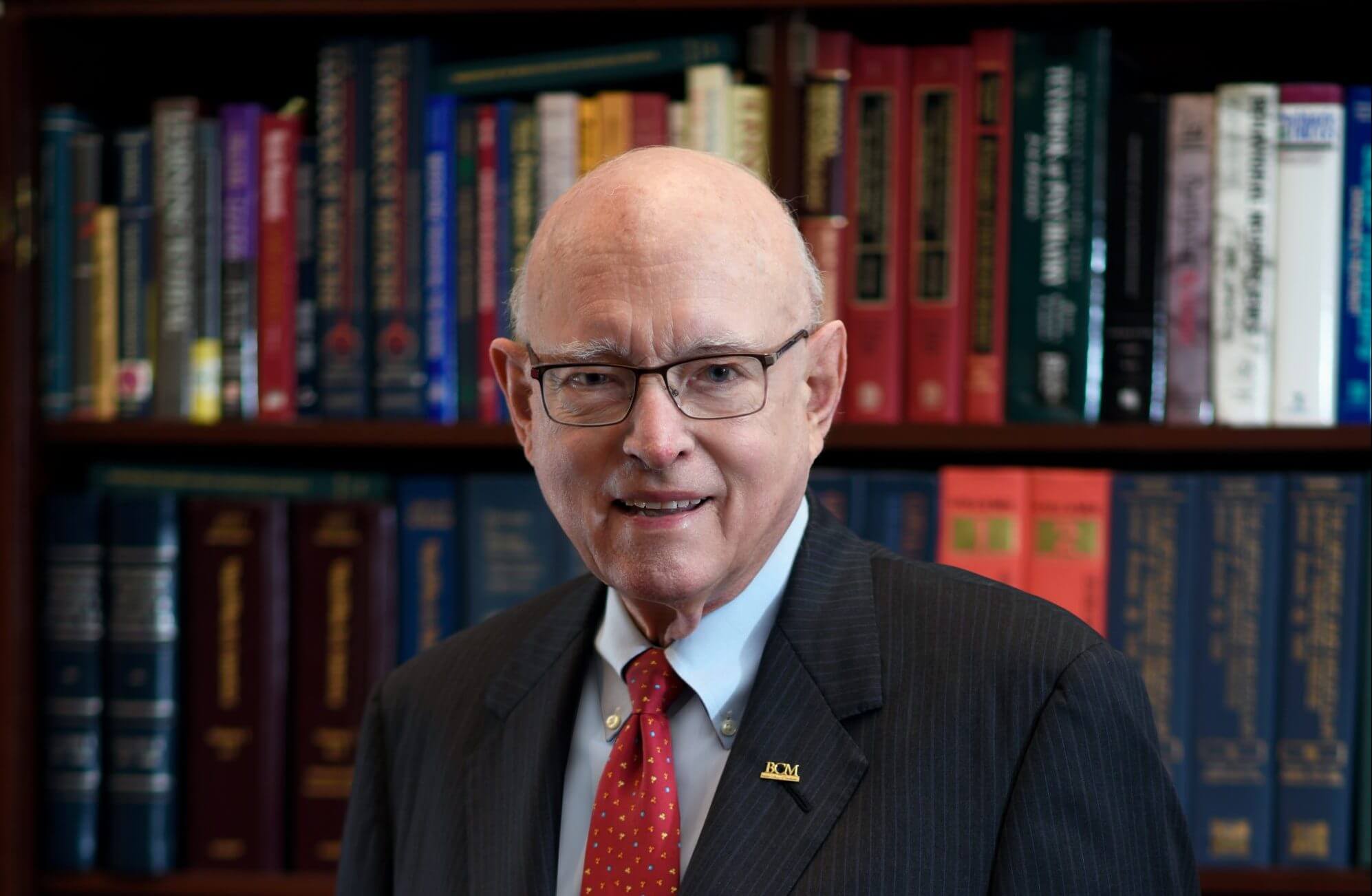 The family of Dr. William T. Butler and members of the Baylor community gathered for a memorial service on Tuesday, Oct. 3, where Butler was remembered as a humble and kind leader whose vision shaped the College into what it is today.

In his remarks, President and CEO Dr. Paul Klotman reflected on the frontier spirit that was required of Baylor’s first president, Dr. Michael E. DeBakey, who led the institution after its move from Dallas to Houston, where it was the first structure and institution in the Texas Medical Center. Baylor still retains some of that frontier spirt today, he said.

Butler’s commitment to and, indeed, love of Baylor College of Medicine was evident in the night’s remarks, especially in those of his son, Tom Butler, who spoke on behalf of the family.
“Bill Butler had three great loves in his life – his children and grandchildren; his best friend and the love of his life, his wife, Carol; and Baylor College of Medicine,” he said. “He loved this place. Many people think that a service like this should be held at a place of worship, but I think of Baylor as his cathedral, so it’s very appropriate that we host this here.”

Butler joined the Baylor faculty in 1966 with a background as a clinical investigator at the NIH. He developed the immunology program here and led important research before embarking on his administrative leadership career. Dr. Robert Couch, professor emeritus of molecular virology and microbiology and adjunct professor at the University of Texas Medical Branch in Galveston, was recruited to Baylor along with Butler in ’66. He recalled that Butler expressed an interest in administrative leadership early on in his career.

“I have no doubt that if he had stayed in clinical investigation, he would have been a giant in his field but instead he became a giant in medical administration, to the benefit of Baylor College of Medicine,” Couch said. “It has been my honor to have him all of these years as my close friend.”

Dr. Jim Phillips, senior associate dean in the Office of Institutional Diversity, Inclusion and Equity, was recruited to Baylor during the Butler presidency. Butler had become concerned about the number of students at Baylor who came from groups underrepresented in medicine when, in 1992, only one black student matriculated. At that time, no African American students had completed the M.D./Ph.D. program. With the full support of Butler, Phillips implemented programs focused on diversity, and today there are nine African Americans who have graduated from the M.D./Ph.D. program, and three currently enrolled.

Phillips described Butler as a thoughtful leader who had good ideas, supported the ideas of others and “participated to the full.”

“He was a vital cog in the success in improving diversity at Baylor College of Medicine. There is no doubt that he was a wonderful leader, and he will be greatly missed,” Phillips said.

After serving as president, Butler was named Chancellor and later Chancellor Emeritus, and was then called on to serve a second term as president from 2008 to 2010 during a time of transition at Baylor, including a financial crisis and lack of a private, adult teaching hospital.

Marc Shapiro, who served as chair of the Board of Trustees at that time, noted that it was Butler’s love of Baylor that made him step back from the life of retirement he was enjoying with his wife, Carol, to take the helm at Baylor once again. Butler exhibited important leadership traits, Shapiro said, including being a great listener and having the ability to make difficult decisions and communicate them effectively. But there was a magical ingredient – people trusted Butler; they admired his integrity, respected his judgement and knew he had the best interests of the institution at heart.

“He not only helped build this institution, but he helped rescue it, and for that we are eternally grateful,” Shapiro said.

With stability regained and Dr. Klotman on board as the new leader, Butler returned to his role as Chancellor Emeritus. He traveled extensively with his wife and spent time with family, but he didn’t step away from Baylor completely, for he was serving as Baylor’s resident historian and penning a five-volume book series, “Arming for Battle against Disease through Education, Research and Patient Care at Baylor College of Medicine.”

Diane Ware, former director of the Baylor archives and co-author of the book series with Butler, said that he was demanding, but not more on others than he was on himself, as well as kind and humble – refusing to include too many mentions of himself in the books – and very meticulous. Butler finished editing the fifth and final book in the series on Sept. 7.

While the books serve as the official history of the College, the institution itself is a legacy to Butler. Klotman pointed out that the signs that hang across campus list Baylor’s values of Respect, Integrity, Innovation, Teamwork and Excellence, which stand as a testimony to Butler.

“It is pretty clear that those words describe everything about Bill Butler. No wonder he is the soul of our organization.”

Other speakers at the memorial service included Rev. Helen DeLeon, who worked for Dr. Butler at Baylor College of Medicine for many years, and Claire Bassett, vice president of communication and community outreach.

Music during the memorial service was provided by Dr. Daniel Musher and Dr. Benjamin Musher, both members of the Baylor faculty and longtime friends of Dr. Butler and family, and by Margaret Bragg and Patrick Moore.