‘A Rather Peaceful Place’

‘A Rather Peaceful Place’ 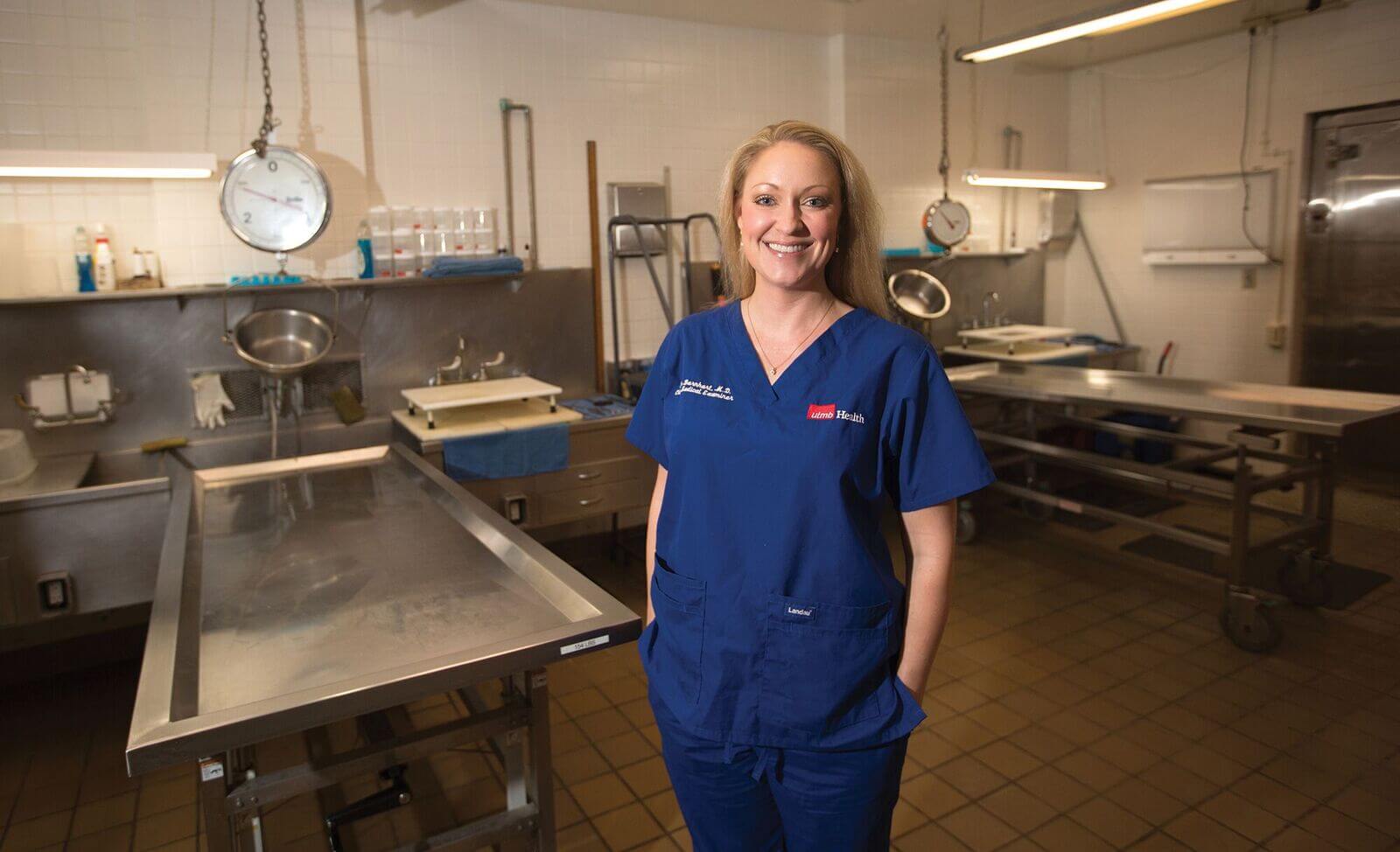 The green folder on Dr. Erin Barnhart’s desk continues to gnaw at her.

The Galveston County Chief Medical Examiner is trying to determine why, exactly, a seemingly healthy man in his thirties came to be found dead in his bed. All she knows is that, before he died, he reportedly had been feeling sick for a few days.

She flips through the pages inside the folder, ticking off the facts that deepen the mystery. The autopsy came back normal, and the toxicology report showed no signs of drugs. Organ samples looked fine too, and Barnhart—down to the last few tests she can perform—isn’t optimistic that she’ll come back with a definitive answer. He might have had undiagnosed diabetes, she speculates out loud, but admits that’s not looking likely. She’s dreading what she’ll likely have to enter into the record—“cause of death: undetermined”—and the uncomfortable conversations with his family that will follow.

“Those are some of the most frustrating, unsatisfying cases,” Barnhart said. “You wonder ‘Have I missed something? Is there something wrong with the story?’ You can drive yourself crazy with cases like that.” 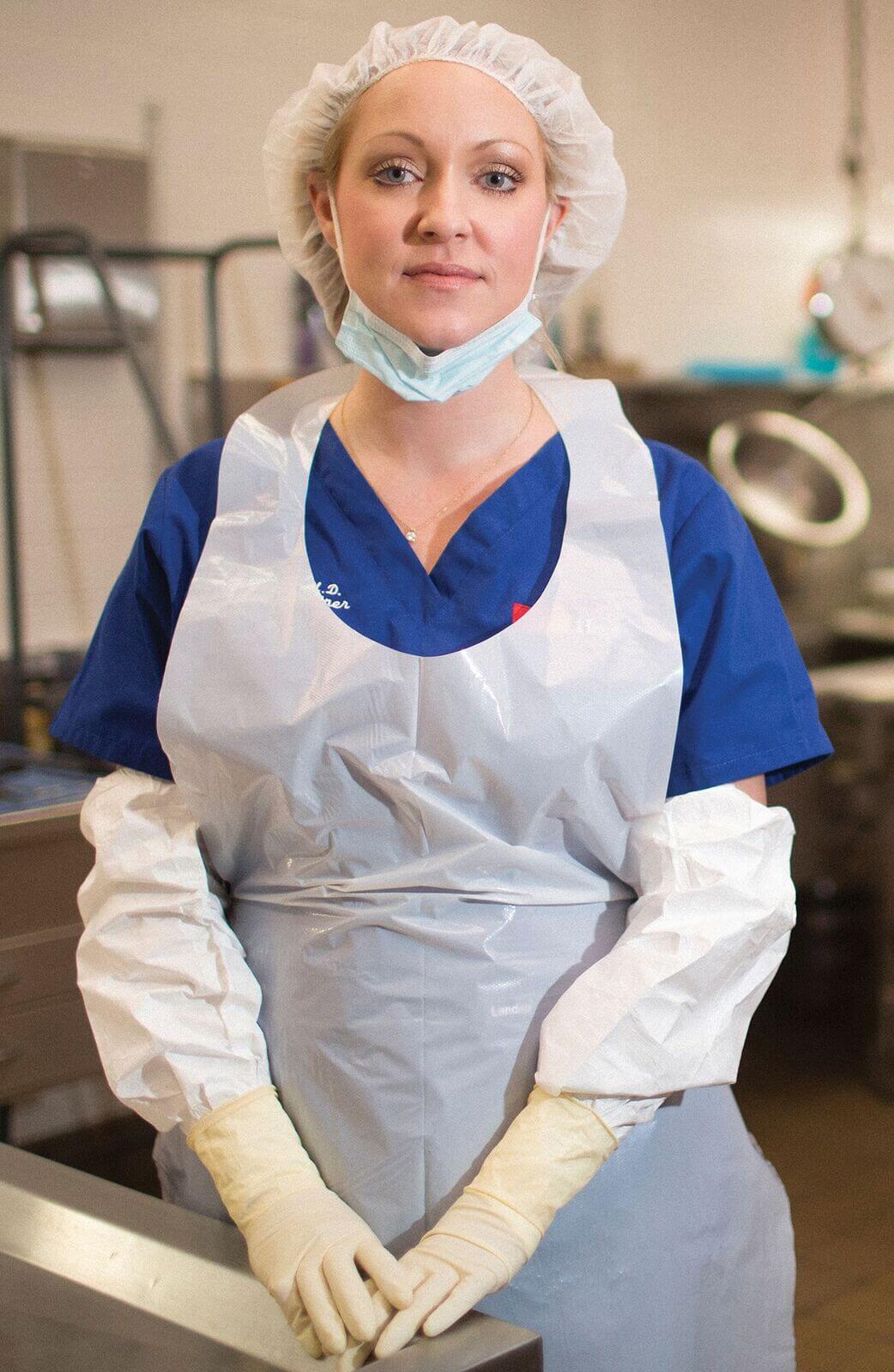 For someone like Barnhart, who is motivated by the search for the truth and the challenge of peeling back layers of a case, the experience can be maddening. Fortunately, she has an impressive success rate: Fewer than 1 percent of her office’s cases wind up with an unknown cause of death. The rest of the time, thorough examination yields clues that ultimately lead to a conclusion. Her office performs about 1,200 autopsies annually.

For Barnhart, a Fort Worth native who took the job in Galveston in 2015, the position was something of a homecoming. She attended medical school at The University of Texas Health Science Center at Houston and did her anatomic and clinical pathol-ogy residency, as well as her surgical pathology fellowship, at The University of Texas Medical Branch at Galveston (UTMB). She completed her training in forensic pathology at the Miami-Dade Medical Examiner’s Office in Miami. Before returning to Galveston to lead the medical examiner’s office, she spent four years as the deputy chief medical examiner for the Mississippi State Medical Examiner’s Office. In her role as chief medical examiner in Galveston, she’s also an assistant professor at UTMB.

Barnhart didn’t expect to become a medical examiner when she was in medical school. But it was always in the back of her mind, ever since she saw autopsies performed while working at a hospital in college—and didn’t recoil.

“Without sounding too morbid, there’s a certain beauty to it,” Barnhart explained. She marvels at the wonders of the body, and her privileged position to observe and explore it. “Think of how few people in the world know what it feels like to squeeze a piece of brain in your hand.”

Barnhart’s office is charged with determining the cause of death in more than a dozen specific instances, including when a human body is found under uncertain circumstances; when a homicide may have taken place; when someone dies in the absence of a credible witness; or when children die, in some cases. Her office is responsible for examining deaths in Galveston, Fort Bend, Brazoria and Matagorda counties.

Though television dramas suggest that medical examiners spend most of their time working with police to solve homicides, those cases represent a relatively small portion of Barnhart’s work. The most common are natural and accidental deaths.

And there are other, television-inspired misconceptions about her job she wants to refute, too. “Those ‘CSI’ shows are the bane of my existence,” Barnhart said with a laugh. “I refuse to watch any of them.” For starters, she doesn’t like the stereotype that the medical examiner is “the troll in the basement,” a morbid or antisocial type who doesn’t work well with others. Medical examiners, she said, interact with the families of the deceased, not to mention police, crime scene investigators and attorneys. They’re generally a friendly group.

And crime shows have created unrealistic expectations from every-one—law enforcement, juries, and the public—about what, exactly, an autopsy can reveal, she said. For example, those mysterious fibers that TV medical examiners inevitably seem to find, that so often crack the case? Barnhart’s never seen them.

The other misconception is that a medical examiner’s work is very depressing. “Nobody here is in pain,” Barnhart says of the deceased who are brought to her office. “Nobody here is suffering. The family members here aren’t facing complicated end-of-life medical decisions. It’s a rather peaceful place.” Though family members are often grieving when they visit the medical examiner’s office, Barnhart and her staff are experienced at interacting with them and showing compassion, given their familiarity with tragedy and death.

Still, the nature of the job forces Barnhart to compartmentalize her work in order to remain emotionally healthy. She doesn’t have an office at home. She avoids bringing photographs home to work on cases. “When you see so many sad cases, you have to have a sense of humor about it—and I don’t mean we’re standing around laughing,” she explained. “But you can’t stand around crying all day at work.” There’s been one exception: In 2013, while working in Mississippi, Barnhart performed an autopsy on a detective she knew. The detective had been questioning a homicide suspect, but the suspect overpowered him and fatally shot the detective with his own gun.

Barnhart had met with the detective just a day earlier. It was the only time she ever cried during an autopsy.

But generally, medical examiners have to avoid identifying too closely with the deceased and their families if they want to continue to be successful at their jobs. “You really can’t let yourself do that,” she said. “Once you start doing that, it’s going to be difficult to come back from that emotionally.”

One of the most rewarding aspects of her work, she said, is when she can explain to a family why a loved one died of seemingly mysterious circumstances. Often, it’s the result of an undiagnosed condition that runs in families, such as heart disease, and she can advise the rest of the family about potential health dangers. Though all of Barnhart’s patients are deceased, those cases may help her save other lives.

She can also tell parents of infants who died under unclear circumstances about undiagnosed conditions those children had. Often, parents blame themselves for a child’s death, assuming it resulted from some sort of mistake they made, like an unsafe sleeping position. But many times, Barnhart discovers the death is actually due to an undiagnosed medical condition, which helps assuage the parents’ guilt.

“You can definitively go to the parents and say, ‘This was not your fault,’” she said. “‘Nobody knew about it, and there’s not anything you could have done about it.’ That mother still doesn’t have her baby, but at least she can say, ‘I did everything I could have.’”

But most importantly, Barnhart says the job has given her an appreciation for the fragility of human life itself. As the person who looks into all accidental deaths in the region, she sees firsthand just how easily—and seemingly randomly—life can be taken away.

“You can eat right, and exercise every day, and always wear your seat belt,” she said. “You can make every decision correctly and still be walking along on a sidewalk and get hit by a car. And there’s not a damn thing you can do about it.”