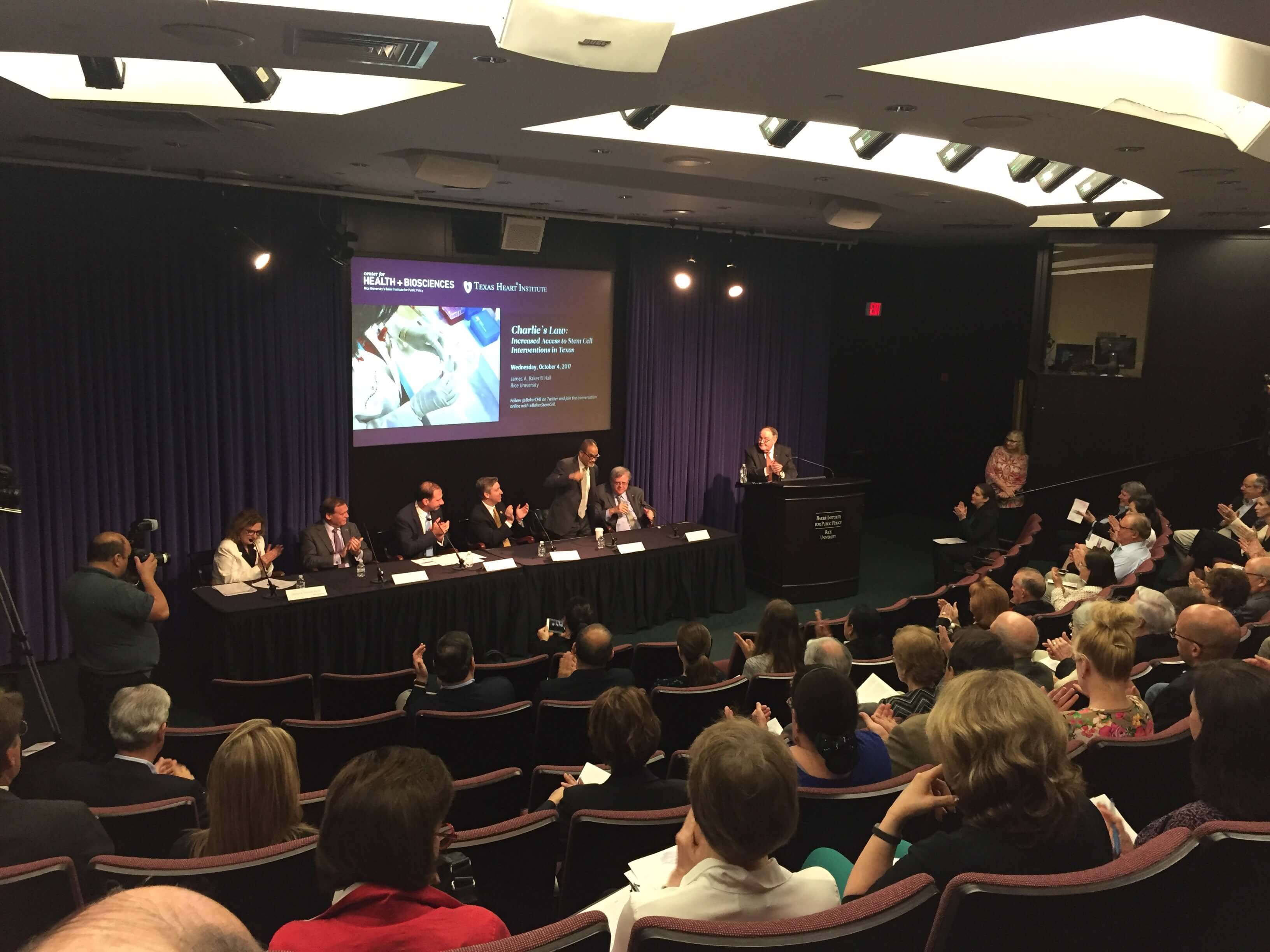 Texas lawmakers and Doris Taylor, Ph.D., director of regenerative medicine research at the Texas Heart Institute, gathered at Rice University recently for a panel discussion to discuss the implications of the recently-passed Charlie’s Law.

Named in honor of the late Texas State Rep. Charlie Howard, Charlie’s Law (Texas HB 810) is the brainchild of state Rep. Tan Parker. Charlie’s Law expands the right-to-try laws in Texas, allowing patients with chronic and terminal illnesses access to experimental stem cell interventions in the state. This is the first law of its kind in the country.

“For me, I’ve really come to this from a personal story,” said Parker, a panelist at the Oct. 4 event. “My wife has suffered from chronic illness for many, many years, and through her eyes and her experiences I started learning about adult stem cells. That really opened my eyes to the importance of this for everybody. And for me, it became an issue fundamentally of medical freedom and medical liberty. Why can’t someone who is of age have the ability to sign off with regards to a proper medical release for something that can make such dramatic difference in their lives?”

Charlie’s Law passed unanimously in the 85th Legislature on June 12 and was signed into law by Gov. Greg Abbott. At present, many Texans and other Americans are traveling around the world to receive stem cell therapies that have been unavailable and illegal in the United States. Stem cells are used used in a number of ways to treat cancer, neurological disorders, diabetes, heart disease and much more.

However beneficial stem cells may be for the future of human health, research in stem cells and regenerative medicine has been a source of controversy in the United States for decades. Patients would have to absorb the cost of these therapies, which could be harmful or ineffective.

In his introduction to the panel discussion, James T. Willerson, M.D., president emeritus at the Texas Heart Institute, explained just what stem cells are.

“All of us should recognize that we are products of stem cells,” Willerson said to the audience at the event, which was hosted by the Baker Institute’s Center for Health and Biosciences and the Texas Heart Institute. “So when one says, ‘I really don’t believe in stem cells,’ they really don’t understand. Around the age of 60, our stem cells become dysfunctional. Our maker gave us these stem cells to repair our heart, our spinal cord. And in life, when we often most need them, they don’t work.”

As one of the world’s best-known researchers in the field of regenerative medicine, Taylor said she looks forward to the doors Charlie’s Law will open for researchers and patients.

“One of the benefits of this law is that it is going to give us a lot more data,” said Taylor , who has been researching stem cells and regenerative medicine for more than two decades and is passionate about their ability to heal. But she cautioned her fellow panelists—Tan, state Sen. Paul Bettencourt, state Rep. Garnet Coleman, state Sen. Charles Schwertner and state Rep. John Zerwas—about the need for scrutiny and transparency in the research process.

“I’d like to remind people that regenerative medicine is unlike anything else we’ve ever dealt with in the world of medicine,” Taylor said. “It’s not like a drug you take and six hours later it is gone and you’ve metabolized it. Regenerative therapies stick around. … You can’t take them back. So I think what that means is that the burden of proof is a little bit higher.”

Taylor explained to the audience that a stem cell can do two things: it can make more of itself and it can differentiate into other kinds of cells. She quickly pointed out that a cell that can proliferate and differentiate is also the definition of a tumor cell.

“Personally, I am a cancer survivor,” Taylor said to the crowd. “I understand the need to find new therapies and I strongly believe in novel, innovative approaches, and yet, I want those vetted. When I needed a therapy, I called Dr. Willerson. I can call any doctor in town and find out whether or not it is safe and that is what we need for patients in this field. It’s our job to make sure innovation happens and it can happen safely. It’s incumbent upon us to be transparent. … Let’s publish negative data. You can’t publish a negative study right now—it’s hard to do—so you won’t know if a cell didn’t work, you only know if it worked.”