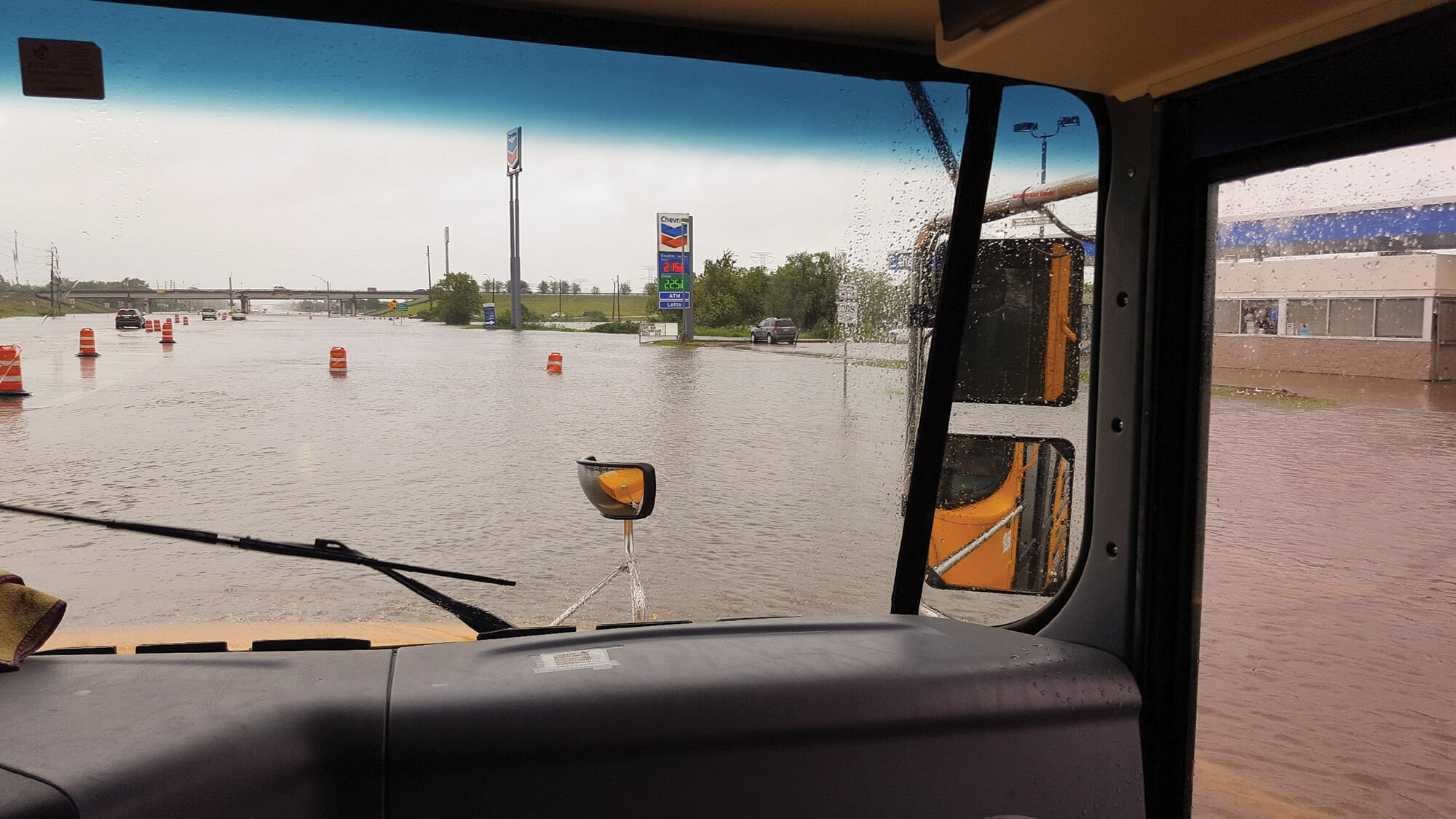 “When I woke up Monday morning and found the Internet was out, I knew the end was near.”

That was the joke I told a group of neighborhood mothers who had come together on a recent Friday to cap off two weeks of cleaning out flooded homes. Around a table of happy-hour cocktails and bar food, we promised no tears, just lots of laughing. And laugh we did.

Our house didn’t seem to sustain any damage from Tropical Storm Harvey. In fact, we retained electricity, water and the Internet through the worst of it.

That’s why Monday, Aug. 28, turned out to be interesting—for my family and the other 299 families living in the Millwood neighborhood of the Riverstone master-planned community in Sugar Land.

Mid-morning, we got word that there was a voluntary evacuation for our area and noticed water starting to pool in the streets. There were rumors going around that the floodgates in our neighborhood were closed, and pumps would be put to work to pull the water out. However, the water was rising pretty fast.

Around 3 p.m., the voluntary evacuation became mandatory. My husband, Matt, and I packed up ourselves and our kids, and threw some snacks and drinks in the back of my car. In less than half an hour, we were backing out of the driveway … into at least two feet of water.

I had a Nissan Pathfinder (I say “had” because it was destroyed in the flood), but it was no match for that much water, so I turned the car around and we headed back to the house.

Now that we were stuck inside, we took some time to move things from the floor of the food pantry and our closet floor to higher shelves and to rooms upstairs, where we planned to camp out. We emptied out a desk of “important” papers and pulled up rugs in the entryway and living room.

Over the next five hours, Matt and I went downstairs every 15 minutes or so to see how fast the water was rising. First it was up to the curb, then the sidewalk, then the middle of the driveway, then past the tree in the yard, then to the first block of the path to the door, then to the second, then the third. When it finally got dark, the water had made it to the top of the bricked entryway that leads to the front door.

We knew at this point that flooding was inevitable, so we turned off the electricity and went to bed. I checked the weather once more, and instead of the rain clearing up on Tuesday as expected, it was forecast to continue and, at times, be severe. I remember telling Matt, “It’s just not going to stop! If it would stop for just two hours, the water would go down.”

When it’s dark and quiet, it’s interesting what you hear. It sounded like a swamp full of frogs had called a meeting outside our house. And when you go to bed earlier than usual, you have extra time to think, as well. What Matt and I thought was: We don’t want to be stuck in this house.

So we got up, called 911 and asked to be evacuated. We shoved some clothes and toiletries into two doubled-up garbage bags.

Now it was a waiting game. We heard Missouri City Fire and EMS boats go by; they continued to make runs back and forth throughout the neighborhood, but didn’t stop at our house. Matt sat at the foot of the stairs while the kids and I sat upstairs as water began to seep into our home.

We listened to the boats come and go, our frustration growing. When Matt went outside to try to flag them down, he let in water and garden mulch. By now, our house had taken in two inches of water.

We called 911 again to make sure we were still on the evacuation list. They recommended that someone stand outside.

As Matt stood on the bench in our front yard, the kids, each wearing a garbage bag raincoat, began to complain of the heat and ask when EMS was finally going to get here.

It was then that the stress finally got to me, and I began to cry. I didn’t want to alarm the kids, so I walked into their bathroom, cried for a minute, wiped my tears and resumed the wait.

As a boat went by, we could hear EMS workers shouting to Matt, telling him we were next. I decided we would wait on the stairs with our two trash bags so we would be ready when the boat returned. Water was now at the top of the baseboards.

We heard the boat and saw lights on the front porch, and for a minute there was a surge of excitement as the kids and I realized we were being rescued. As Matt and an EMS worker entered the house, a rush of water came with them. I was wearing rain boots, but I had to step down to get into the boat at my front porch. Water poured into my boots.

The EMS workers helped us into the boat. The kids did not want to get wet, but the benches in the boat had sitting water from the rain. As we drove away from the house, we saw other people shining flashlights or standing in their garages asking for help. They were told the same thing we were—that EMS would come back for them. It was still raining, so the water was stinging my face as I gripped my belongings and the children.

The kids thought this boat ride was the most fun they’d had all day. Meanwhile, I was in awe of the devastation around me. I saw cars parked in driveways with water up to the tops of their wheels, water up to my neighbors’ front doors. The water on the street was at least four feet deep.

As we headed out of our neighborhood, I saw a fleet of emergency vehicles at the top of the hill. The boat took us as far as it could go, and then another set of EMS workers helped us out of boat and onto a large dump truck. Again, the kids were excited to ride in a fun vehicle.

Everyone’s socks and shoes were soaking. In the dump truck with us were two men and a family with a young girl and a baby. We made small talk, asking what was fast becoming the standard set of questions: What street do you live on? How much water was in your house when you left?

The dump truck dropped us off at a gas station where about 30 people—and several pets—lined up to wait for transport. At this point, it was close to midnight, way past my own bed time, but the children were actively talking. My youngest was fearful that one of the dogs would break free.

A large S.W.A.T. vehicle pulled up, and a line of wet people climbed on. In just two hours, my children had ridden on a boat, in the back of a dump truck and, now, in a S.W.A.T. vehicle. These were the best hours of their lives.

We headed to a church that was being used as an emergency shelter. We were thankful for a dry room, a bathroom and the chance to change into dry clothes. However, we would have to spend the night on a thin carpet. By now it was 1 a.m., and many people were still reeling from all the drama. Sleep wasn’t immediate. I slept for maybe two hours.

The next morning, we found out that our neighborhood Facebook group had become a “help line” for people who needed to be rescued. People said there were five boats deployed there. The neighborhood made it into a KHOU video.

By 10:30 a.m., we were on the move again, riding on a Fort Bend School District bus to a shelter in Manvel, about an hour away. The kids were not impressed by this ride.

We drove near our neighborhood to avoid some flooding—how ironic—and saw our dump truck from the previous night waiting at the top of the hill. We later learned that Missouri City Fire and EMS spent the next few days rescuing many of our neighbors. Those guys are awesome!

At the intersection of Highway 6 and Highway 288, the bus encountered high water. All the passengers voted unanimously to turn around.

The bus driver headed to a shelter at a nearby high school, and on the way I got a call from a restricted phone number. It was 911 checking to make sure we had been rescued.

We arrived at Kempner High School around noon. It had been turned into an American Red Cross shelter that was as busy as a thriving metropolis. People drove up and unloaded bags upon bags of clothing, food, bedding, toiletries and even games and activities.

One entire wall of the cafeteria had been transformed into a giant clothes bin. Matt and the kids were able to find dry shoes, and we were all treated to a hot lunch. We chose bedding to make a pallet on the floor and Matt foraged for some toiletries while the kids settled down to watch Netflix on my phone. We made friends with the couple next to us, who had also evacuated from their home.

This was the first time in a while that Matt and I felt comfortable enough to close our eyes. I had never stayed at a shelter before, so I had nothing to compare it to. But everyone who volunteered—from the Red Cross to the high school students to the Fort Bend ISD employees—made us feel at home.

We didn’t stay long, though, because one of Matt’s work colleagues offered us a place to stay. Over the next week, we stayed in four different homes, dragging our doubled-up garbage bags with us.

By Sunday, Sept. 3, nearly a week after we were rescued, the water had receded enough for us to gain access to our home. The house took in 17 inches of water and the garage took in 20 inches. Both of our cars were ruined, and we had to completely gut the first floor of our house. We hauled ruined chairs, lamps, shelves and toys to the curb, the spoils of 15 years of marriage and two kids.

It’s been more than five weeks since the storm. We are so thankful to everyone who helped us, from work friends to high school sports teams to random people who just wanted to lend a hand. We have a long road ahead—it might take until late December to make our house inhabitable again—but we’ll get there.