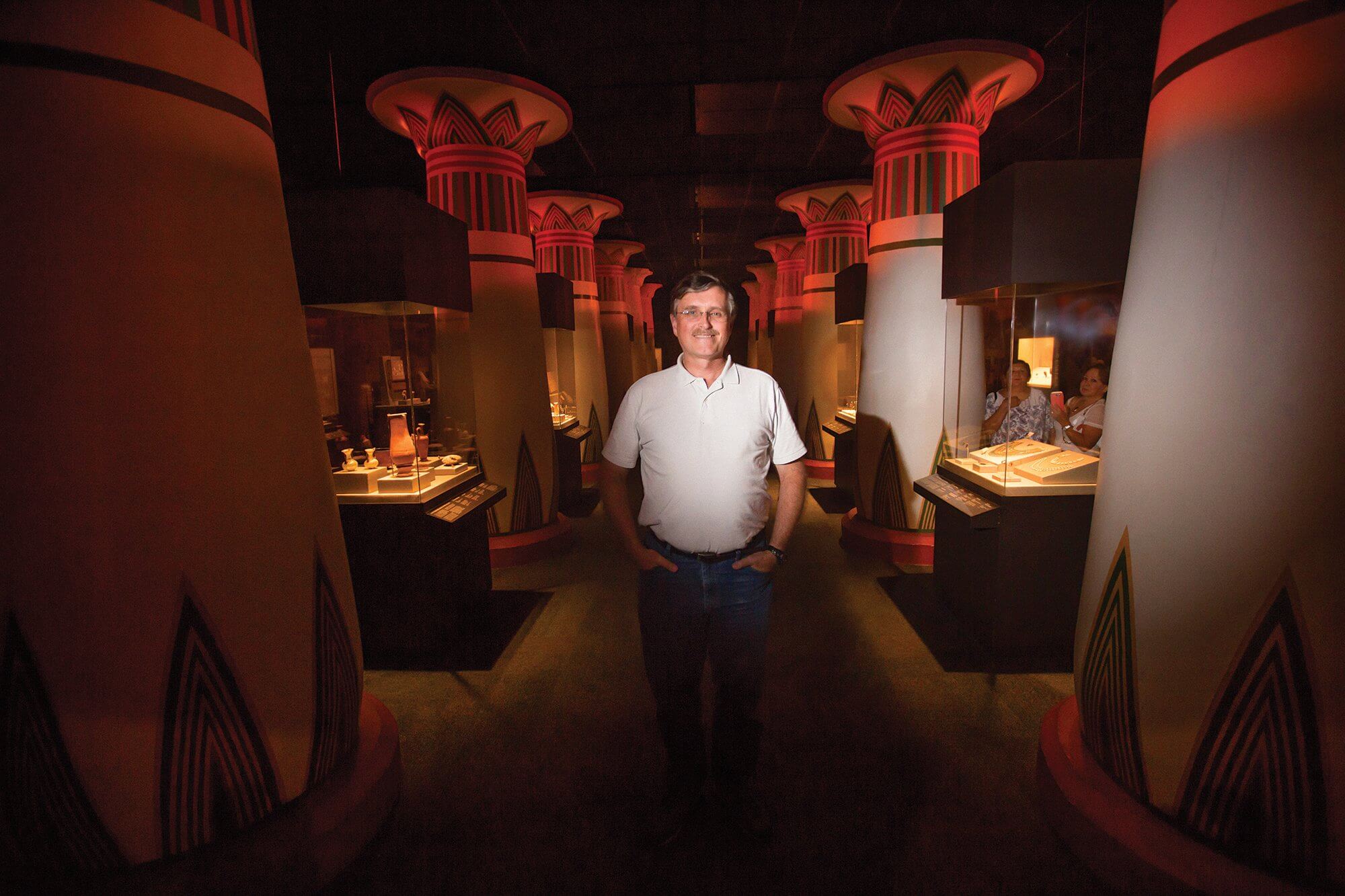 In ancient Egypt, many priests were also physicians. A priest-physician might diagnose a stomach aliment, provide a treatment of honey, and then instruct the patient to pray to Horus—the God of protection—for healing.

“We have evidence of what we call today the placebo effect,” said Dirk Van Tuerenhout, Ph.D., curator of anthropology at the Houston Museum of Natural Science (HMNS). “If you were stung by a scorpion or bitten by a snake, or worse a Nile crocodile, in which case you would most likely be dead, what people would do when they got home was pour water over representations of Horus. And the water that ran over this statue, which was thought to have medicinal properties, would be collected and then
the person who was stung or bitten would drink it to be healed. If it worked, it was most likely the power of the mind.”

The Hall of Ancient Egypt at HMNS is a permanent exhibit that devotes 11,000 square feet to the daily life of this primary civilization, through artifacts that include mum- mies, statues and vessels.

“The artifacts in the exhibit show where Egyptians were geographically and chronologically, their daily lives, religion, mummification and burial, and finally an explanation of how we know all of these things about their culture,” Van Tuerenhout said.

Health concerns were top of mind for ancient Egyptians because their lives were so hazardous and dangerous. Situated in the Sahara Desert and along the Nile River, Egyptians were exposed to intense heat, diseases from river water, hippopotamus attacks, and more.

“It’s a toss up, because you have a river, but it is not the cleanest,” Van Tuerenhout said. “It is good for some things like fishing, but it is not good for drinking or bathing.”

But Egyptians did use river water to make a beverage that is still popular today.

“Egyptians made many receptacles of pottery and glass to safely store food,” Van Tuerenhout explained. “They also made strainers which were used to strain barley and wheat from water. It didn’t take them long to discover when you have water and grain you can make beer. That is a good thing in many ways … If you drink the regular water, you might get sick, but if you have fermentation and alcohol in your drink, it might kill some bacterium and improve your overall health. It is a mark of a highly sophisticated society.”

Hygiene was also very important to ancient Egyptians, whether that meant bathing daily, shaving the hair from their bodies or using galena, a ground up mineral that was applied to the eyes of men and women—similar to eyeliner today. Galena not only enhanced the eyes, but protected them from the intense desert sun and repelled flies that could cause disease and blindness.

“Egyptian men would be clean-shaven, shaving their entire bodies—women as well, including the hair on their heads,” Van Tuerenhout said. “They would wear wigs made of human hair. That would have helped to escape the heat and mitigate any infections, as well.”

The first forms of surgery and understanding of human and animal anatomy emerged from the burial practices of ancient Egypt. At the time, reincarnation and the afterlife were major concerns, and Egyptians spent decades and fortunes to ensure a comfortable transition.

“When you mummify a person, it is, of course, a surgical procedure,” Van Tuerenhout said. “They were preparing the bodies for the afterlife and realized over time to properly preserve the body, all fluids would need to be drained.”

Techniques for mummification transformed over the years, but most commonly, a priest or physician would remove a corpse’s internal organs and drain all moisture from the body using a Y-shaped carving tool, which made a very small incision. The organs would be placed in separate receptacles and then the body would be wrapped with long strips of linen and covered with a large linen cloth before being placed in a sarcophagus.

The paintings and symbols on the sarcophagus, a wooden or stone coffin that protected a mummy, told stories of the deceased and their hopes for afterlife.

“On a mummy sarcophagus,” Van Tuerenhout said, “you will find all kinds of prayers for what everyone wants—and that’s eternal life.”