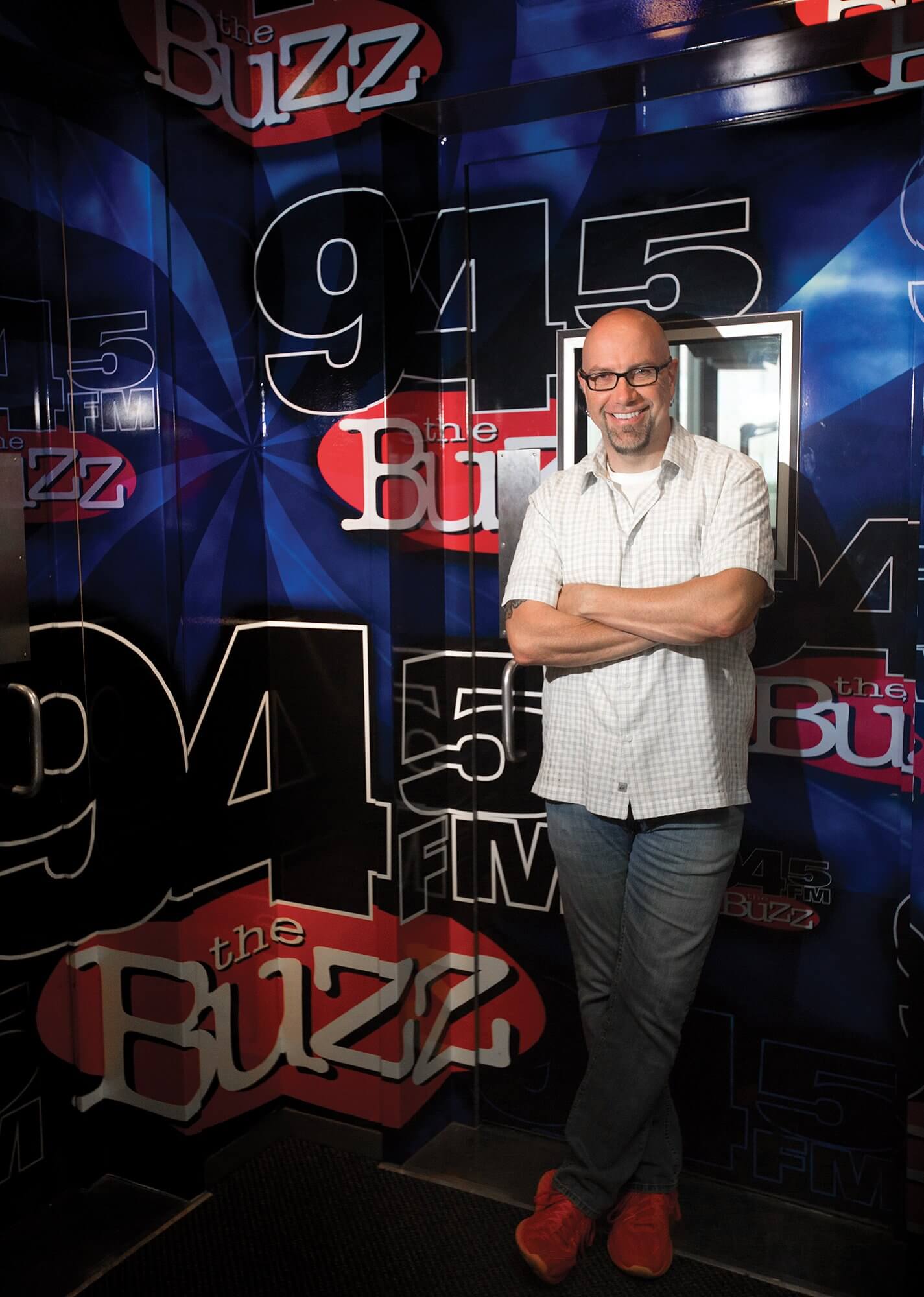 Plenty of Houstonians wake up to the voice of ROD RYAN, whose edgy, high-energy radio show airs 6 to 10 a.m. weekdays on 94.5 The Buzz (KTBZ-FM). After nearly 30 years on the air, Ryan has built a loyal following with his larger-than-life personality. A Houston transplant by way of Buffalo and New Orleans, Ryan is as committed to raising awareness about breast cancer and prostate cancer as he is to The Rod Ryan Show.

Q | Growing up, did you dream of becoming a radio host?

A | No. I was a failed rock star. I was playing in bands—one was called Cracked Alley. No, we didn’t do crack; we weren’t druggies. I don’t even have a good story about the name, it was just silly, hair band metal. We did a big show for Warner Bros. and they passed on us and I said, ‘That’s it.’ We were packing up and we were going to go to Los Angeles. This is pre-Nirvana, so everyone looked a little different and sounded a little different, too. I just said, ‘No, I’m not going,’ and I quit the band. We had done a bunch of radio interviews and stuff when I was in the band and I said, ‘Well, if I can’t be the band, I’ll be the guy who interviews bands. Maybe I’ll go for radio.’ But I wasn’t talking into my hairbrush when I was a little kid.

Q | Was radio different than you expected?

A | I was always a huge fan of the radio and music was a huge part. Most people get into radio because they love music. Anybody that wants to intern here or work here—outside of people who already know and have done radio before—I break their hearts and I say: ‘We aren’t, like, rocking out in there. We’re not jamming out, like, This is awesome! We are in there shuffling paper, getting traffic ready and news stories. We aren’t listening to what we are playing on the air, we’re just trying to get ready. I’ve got three minutes to figure out what I’m going to talk about next. When we get off the air, I’m here until 2 p.m. and I’m not planning any musical thing. I’m thinking about how I’m going to sell more t-shirts for the charity, this sales person wants me to do an appearance here, and how do I make this client happy?’

Q | You’ve been doing this show for almost 20 years. Have you gotten used to waking up so early?

A | I wake up at 3:20 a.m. every day. I have heard people say that you get used to it, but I don’t think you ever do. I don’t get up and complain about it, but I’m not waking up skipping and whistling around my house either. I just get up and do it. It’s hard to imagine a time when I wasn’t just a little tired, but that comes with the gig. It’s the most high-profile position, most high-profile time slot and not everyone wants to be the quarterback. I want to be the quarterback. The morning show sets up the whole station for the whole day, so there is a lot of pressure and I want that pressure. I want that.

Q | Because your show is so high-profile, do you feel a certain level of responsibility to do something with your influence?

A | Oh yes, absolutely I do. My plan was to get involved in some charities and not push them down people’s throats and hopefully choose things that not only we were passionate about, but that people would also be passionate about. We are talking being here in Houston and kids in Houston needing backpacks. Sending money to Zimbabwe is great, but it just seemed like more of a harder sell, and I wanted to give back to the community. So the big one is the backpack drive for the kids. We also adopted a team of doctors at MD Anderson about nine years ago, and we do a lot with the Houston Furniture Bank and the Houston Food Bank. We have been working with Houston Boxer Rescue to get dogs adopted.

Q | Can you describe how your partnership with MD Anderson came about?

A | We have the world’s greatest medical center in our city, so we kind of thought instead of just making pink spatulas, we would give our money to this team of doctors whose job every day is to go in and cure cancer. And they have been so great. They are so appreciative of what we do, and these guys are probably getting million-dollar checks every day for grants and whatnot, and here we are coming in with our $75,000. We look up to them because of the job they do, and we tell them how proud we are.

Q | Which cancers do you specifically support?

A | We do “Boobs Rock” in October for breast cancer awareness and the “Kick Ass” campaign for prostate cancer awareness in September. We sell shirts and whatever else we have schlepped our name on to raise money, but it’s really about sharing the experience. Guys have emailed and they say, ‘OK, I went in because you were talking about it on the show.’ You have to do it. We all know now that prostate cancer is one of the most curable cancers if it’s detected early.

Q | When did you realize people were really listening to your show and taking action because of it?

A | The biggest wake-up call to me was here in Houston. When you are in radio, you are kind of involved in charities— you go, you emcee, you lend your time. The things that we have done here in Houston have just gone to another level. Hurricane Katrina we broadcast on the air. I wanted to stay on the air and play whatever people wanted to hear, but to raise money, they had to pay for us to play their song. So I came up with a rate card: $50 for a song we normally play—Stone Temple Pilots. Say you wanted to hear Fleetwood Mac—you would pay me $75. And then if it was really ridiculous and you want to hear Frank Sinatra or if you are a local band, I’ll play your song for $100. I talked my bosses into it; we went on air Wednesday at 6 a.m., not really knowing what was going to happen. We stayed on until Friday at noon—50-some hours, three days straight, no sleep—and we raised $504,000, the area code of New Orleans. All of the money went to the Red Cross. I can’t plan that, write that or project that. People would say, ‘Here’s $1,000, play this song.’ And that is when I said, ‘Wow.’ I had no idea. I had done charity stuff before that and I had been in radio a long time before that, but it was Hurricane Katrina when I realized this community will step forward and help when asked.

Q | How do you decide what to talk about on your show?

A | No one really tells you when you start out that you are going to give up so much of yourself. We talk about what’s going on in our lives, but you are walking that balance. I do a ton of show prep for the show every day; we have to know what’s going on. Everybody has access to the same things we do now. The internet has leveled out the playing field. Before, the guys on the radio knew more about music than your average guy—they had access to the AP wire. We were supposed to know more and now, we don’t. We just know what you guys know and nine times out of 10 you know more than us. We mostly talk about life-style stuff. We are just trying to plug in and make that connection—whether it is pulp in the orange juice or a bad haircut. There is a balance between lifestyle and what is happening in the news. I try to walk that line because I’m kind of the director of what we do and what we are going to talk about.

Q | Are there any topics you stay away from?

A | I try not to get into politics, but it’s impossible not to mention it at all. That is something that people are so passionate about. There are things that are happening with Donald Trump and even Obama, things that we have to mention. And as soon as you say some- thing about one side, people will say, ‘Why don’t you say something about the other?’ If I made fun of Hillary during the election, people would say, ‘Why didn’t you make fun of Trump?’ You have to walk that line. It isn’t hard for me, because I don’t love Trump, and I’m not upset that Hillary lost. But it is a big trigger for a lot of people.

A | It just happened. I wasn’t thinking, ‘Oh, you’ve got to get married.’ I wasn’t getting pressure. I guess you just meet the right person and it happens. We met on St. Patrick’s Day at Lucky’s Pub. She didn’t know who I was. She’s not a big partier, so it’s bizarre that she was there, but we met and she wasn’t impressed with me or who I was, and it was awesome. Then she started listening and I got worried. She has never once told me not to talk about something on the radio. We have been married just over a year.

Q | What are your favorite things to do outside of work?

A | I like hanging out with my wife and my dog, Voodoo Ryan—she’s a rescue from Houston Boxer Rescue. I like the weather here, so I like being outside. I know it’s hot, but this is coming from someone who shoveled snow for 25 years. I like getting outside; I’ll go for a run today. I don’t feel like enough people do it because it’s so hot and it’s not a walking city. That is my one ding on the city—we don’t walk around.

Q | What is your favorite restaurant in Houston?

A | It is hard to pick one, but I have to say Pappas Bros. Steakhouse on Westheimer. Man, you can’t go wrong there. I just get meat. I mix it up. If you really want to impress somebody from out of town, that’s the place. The service is killer.

Q | What are your hopes for the city of Houston?

A | To get some kind of a breakthrough, like curing cancer, to come out of Houston, that would be great. Houston, to me, has a bit of an identity crisis. I love the city. It has been so good to me, but when I told my friends I was moving here—I was living in New Orleans—people said, ‘For what?’ I said, ‘It’s the fourth biggest city in America!’ People don’t know that about us. We did great during the recession when the rest of the country was getting dumped on, but I just don’t think people know how great this city is. And if something like that broke out of the medical center—God that would be amazing. It would be amazing for the actual cause and it would be great for the city. And winning a Super Bowl.

Rod Ryan was interviewed by Pulse sta writer Britni N. Riley. This interview was edited for clarity and length.