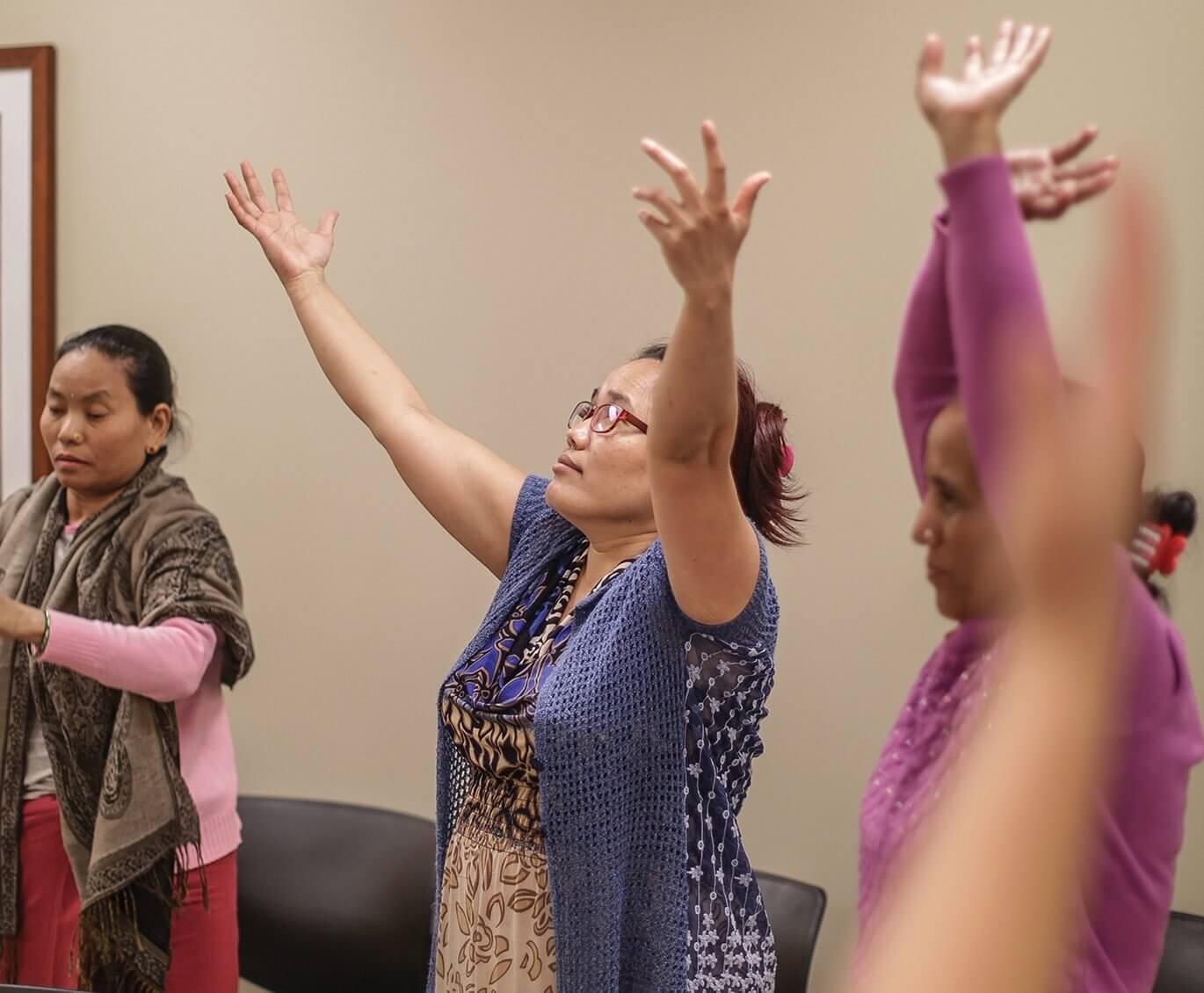 Several patients wait in a nondescript room at Harris Health System’s El Franco Lee Health Center. Their colorful clothing stands out in contrast to the sterile surroundings—some wear traditional attire from their home countries, while others are dressed in typical American fashion, a visible symbol of a new start in a foreign land. In the room are refugees from Myanmar (Burma), Bhutan, Iraq, Afghanistan, Sri Lanka, Sudan and other countries. All have come to Houston in search of a better life and all have come to this room seeking help for trauma.

About 3 million refugees have been resettled in the U.S. since the Refugee Act of 1980 created standards for screening and admission. Houston, in particular, has been a safe haven since the arrival of thousands of refugees who left Vietnam by boat beginning in the late 1970s. Currently, refugees are fleeing their home countries at a record rate. There are 65.6 million forcibly displaced people worldwide, the “highest level of displacement on record,” according to UNHCR, the United Nations refugee agency.

To qualify as refugees, individuals must be able to demonstrate they were “persecuted or feared persecution due to race, religion, nationality, political opinion or membership in a particular social group,” according to the U.S. Department of Homeland Security. As a result of the trauma they often endure, refugees suffer from mental health issues at a higher rate than the average population.

“They may not necessarily have PTSD or major depression, but they may have symptoms of PTSD or depression that can be helped if we connect at the right time,” said Sophia Banu, M.D., an assistant professor at Baylor College of Medicine and director of Harris Health System’s Clinic for International Trauma Survivors.

As countries worldwide seek ways to alleviate the growing mental health crisis among refugees, Banu’s clinic offers help to the thousands of refugees who have settled in Houston. Inspired by her work at the Bellevue/NYU Program for Survivors of Torture, Banu set a goal of starting a similar program in the Texas Medical Center.

“In the beginning, I would go to resettlement agencies to tell them about the clinic,” Banu said. “I also trained caseworkers in how to identify clients with mental illness—‘if they say this, make sure you call me right away.’ Slowly but surely, the word spread, and it really started picking up in December 2013.”

The clinic treats patients from all over the world. Wali, 46, who declined to share his last name, arrived in the U.S. from Afghanistan in November 2015. After he and his wife reported physical symptoms to their primary care doctors, including headaches and high blood pressure, they were referred to Banu’s clinic.

“In Houston, the only person that I am sharing my problems with, telling what’s in my head, is Dr. Banu,” Wali said. “She’s listening, she’s evaluating properly and professionally, and she’s giving me good advice.”

Wali, his wife and four children, who range in age from 15 to 21, moved to the U.S. “for more security.” In Afghanistan, Wali’s daughter missed years of school because the Taliban would not allow girls to be educated, he said. One of the striking things he first noticed about the U.S. was people walking or driving at night.

“We could drive during the night in Afghanistan, but not safely or alone,” Wali said. “If I had to go, I would take other people. Even here, when I go somewhere, I think alone is not good.”

Now all of his children attend school. He no longer fears they will be kidnapped or attacked. His daughter, once denied an education, now dreams of working in medicine. Still, though grateful for his children’s successes, Wali misses aspects of his former life.

“I worked for 10 years as a civil engineer. I had a good life, good income,” said Wali, who now works in a construction-related job. “The life I had over there compared to here is not the same. But of course, if security is not good, you could have a roomful of food but you will not be safe.”

Banu said that despite the trauma many refugees experienced, feeling homesick is not uncommon.

Life is so different in the U.S. that it can be overwhelming. Another patient, Aw Meh, a refugee from Burma, spent years in the jungle, surviving on food she grew, even giving birth to one of her children there. When she arrived in the U.S., she said she didn’t know how to use a stove.

“She would say that, at times, life in the jungle was better because she could grow her food. She didn’t have to figure out electricity,” Banu said, as Meh nodded in confirmation. “Here you are in the city, and you have everything, but if you don’t know how to use it or you don’t know how to get it, it doesn’t help.”

Many patients who seek help at the clinic report difficulty navigating their new lives in Houston—both emotionally and physically. One of the biggest challenges patients face is lack of transportation. Banu said the bus stop in front of El Franco Lee Health Center, as well as its proximity to neighborhoods where refugees are settled, were key factors in choosing it as a home base.

“I thought it would be easier than Ben Taub, which is difficult to get to,” Banu said. “But if they don’t know how to get on the bus … that’s a struggle we deal with constantly. We’re here, there are patients who need us, but there is not transportation.”

Despite obstacles, the patients do their best to make it to the clinic. Some will get a neighbor or friend to drop them off, Banu said. For others, she asks caseworkers to teach them to use the METRO Houston system.

“They are here because they want to survive. For a majority, if you teach them how to get on the METRO, they will manage,” Banu said. “They have survived so much, they would easily learn to get on a bus.”

That will to survive is something Banu sensed among her own family members. After China invaded Tibet in 1950, her Tibetan Muslim family, “was a minority within a minority,” Banu said. They were told to renounce their religion or leave. Fearing for their safety, they fled to India.

“It’s in me, part of what my parents and grandparents had to go through,” Banu said. “Maybe I was destined to work with refugees.”

Soon Banu will further expand that work by seeing patients at Alliance for Multicultural Community Services, a nonprofit located on Hillcroft Avenue.

“They come to the agency for other services, whether to get food stamps or education and employment services, ESL classes,” she said. “When they come there, I can see them. They don’t have to worry about someone having to take them to me.”

Alliance already refers a large portion of the clinic’s patients, including Laura Jacob, a pseudonym for a woman who requested that her real name not be used. Jacob moved to Houston from Iraq in November 2014. She worked on a project with the United States Agency for International Development that made her eligible for a Special Immigrant Visa. She said when she arrived in the U.S. she was “totally broken down.”

“Beside all that I have seen throughout the last 15 years in my country, the war and all the troubles, I also lost my mother, I lost my house, I lost everything,” Jacob said. “I was attacked, I was threatened, I was scared, whatever you can imagine.”

The first time she visited Banu, Jacob said she spent the appointment crying while Banu listened.

“Imagine you are somewhere you don’t know anything about and you have nobody,” Jacob said, her voice breaking. “She helped me a lot, and thank God I made it. When you speak to someone and they listen to you and they advise you, it helps.”

Though some patients require medication, Banu said often what a patient really needs is someone to listen—to make them feel validated.

“For us to say, ‘That must have been so hard for you—how did you manage, what did you do?’ Empowering them, giving them a sense of control,” Banu said. “That is what helps them to do the things they need to do, and to move forward.”