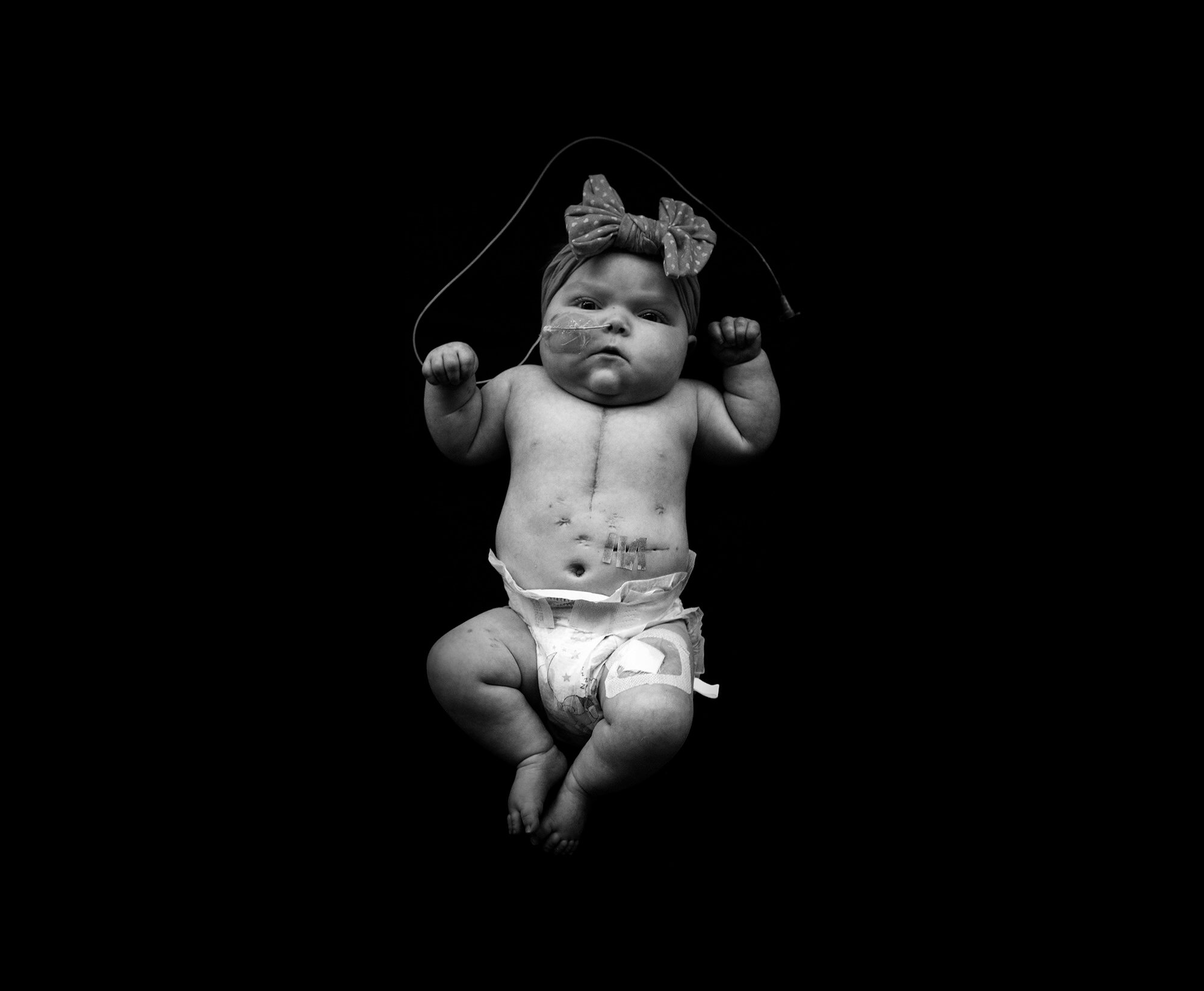 When her infant daughter is older, Autumn Spivey will tell her that her scars are symbols of her inborn courage, of “how brave she has been through all of this, even though she may not remember.”

Halle Spivey was born Dec. 5, 2016, with congenital heart abnormalities, including a double inlet left ventricle, where the left and right atria of the heart are connected to the same ventricle; transposition of the great arteries (TGA), in which the two main arteries leaving the heart are reversed; and hypoplastic aortic arch, indicating a blockage in the aorta.

Just three days after her birth, Jeffrey S. Heinle, M.D., associate chief of congenital heart surgery at Texas Children’s Hospital, performed lifesaving surgery on Halle, reversing her TGA and inserting a Blalock-Taussig (BT) shunt to increase pulmonary blood flow. On Jan. 15, 2017, she had a second, unexpected surgery, to address a narrowing of her coronary artery.

Then on April 4, Heinle performed a third surgery on Halle, replacing the temporary BT shunt with a Glenn shunt and re-routing her superior vena cava to a pulmonary artery. He also inserted a pacemaker to help control the speed and rhythm of her heart. Eventually, Halle will undergo a Fontan procedure to help direct blood to her lungs.

Since this photo of Halle was taken in May, she has undergone additional surgeries and one very close call. At a certain point, when her heart rate became elevated and her breathing fast, doctors were forced to inject medicine via intraosseous (IO) infusion—through the bone and into the marrow.

“They needed to intubate her to help take the workload off her heart, and when they did, she coded,” Autumn explained. “They pushed the meds and performed CPR for 27 minutes. They called for ‘last pulse check’ and there was no pulse. They pulled me over to her bed to say goodbye before they called it, and her heart started beating after I kissed her little hand! It was seriously like a movie! I heard ‘get a line in,’ and was moved away from the table.”

Although doctors stabilized Halle, the IO had leaked into her blood vessels, causing them to constrict. She never regained blood flow back to her right leg and, as a result, the leg had to be amputated through the knee.

But Halle rallied. And on Aug. 7, after 245 days at Texas Children’s Hospital, she was released. On Facebook the following day, Autumn thanked everyone who was and will continue to be part of her daughter’s journey:

“We have been truly blessed by close, personal friends, as well as strangers who follow her story. … Our families have been incredibly helpful and encouraging, and willing to drop everything to do whatever we needed of them. … The wonderful nursing staff at TCH has also been a HUGE support for me. They have made being at the hospital day in and day out one of the best parts of this experience. I have made many friendships with them that I know will continue after our stay. Lastly, my fellow heart moms! Without them, I’m not sure how I would have survived. This life is not made for the weak, and I have never thought of myself as strong, but these women have helped me find my strength and advocate for Halle.”

Now that Halle is home, Autumn said, it’s hard to even think that she spent her first eight months in a hospital.

“She seems like a completely normal baby, besides all the medications, of course,” she said. “She is taking everything in, and loves being outside in her stroller. She has been sleeping through the night, and adjusting well. She’s a little night owl, though, like her older brother. Ha! That just means we get to sleep a little later in the morning.”