The $100,000 grant from Alpha Phi Foundation will fund research aimed at studying cell differences between sexes to optimize cell therapy 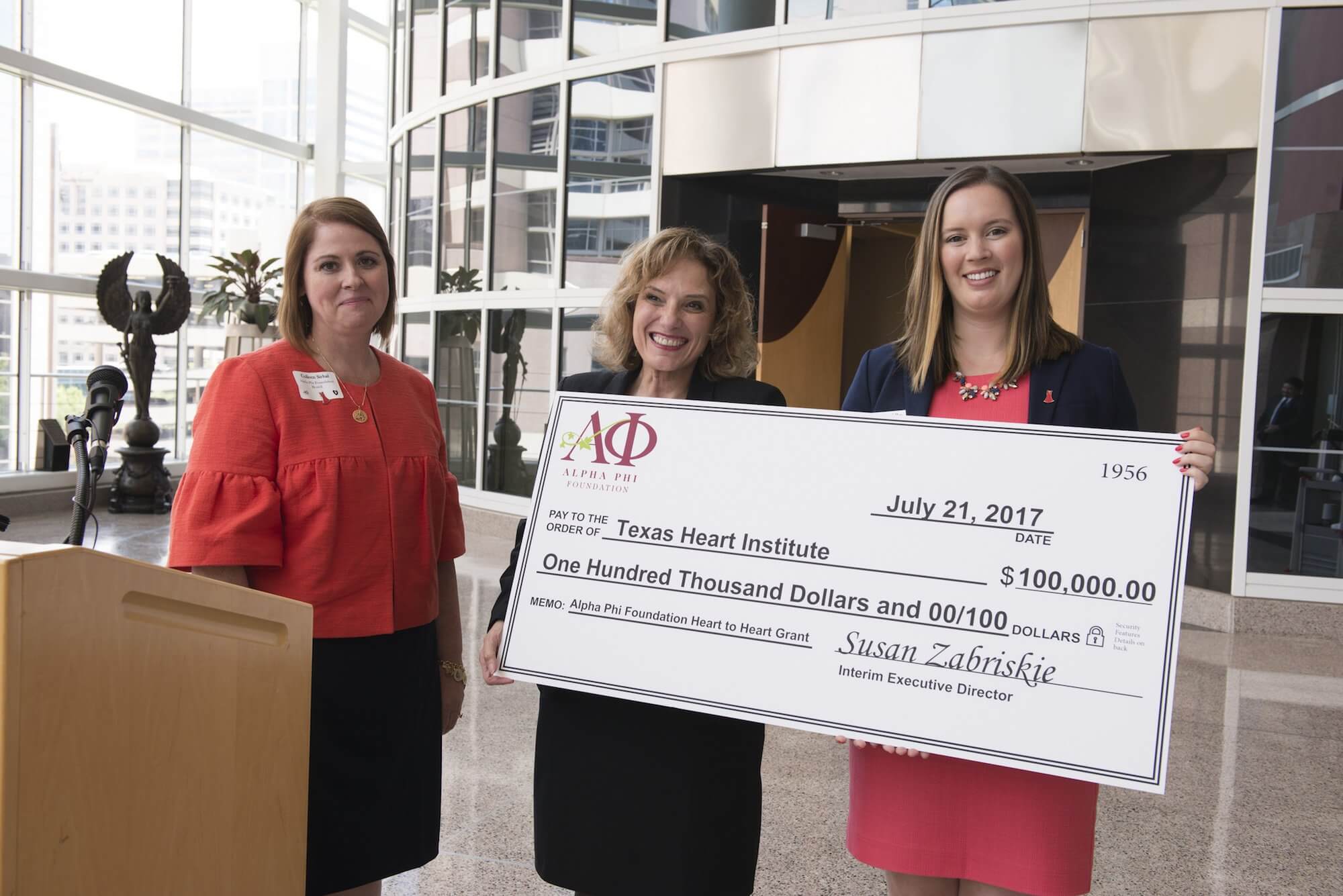 Earlier this year, Texas Heart Institute received Alpha Phi Foundation’s 2017 Heart to Heart Grant. The $100,000 grant will fund research led by Doris Taylor, Ph.D., director of the Regenerative Medicine Research and the Center for Cell and Organ Biotechnology at the Texas Heart Institute, to study cardiac repair in women at the cellular level.

“We’re just really passionate about these projects that have long-term clinical relevancy, as a women-driven organization and being committed to women’s heart health,” said Colleen Sirhal, vice chair of the Alpha Phi Foundation.

While bone marrow cell therapy has been used to treat cardiovascular disease in clinical trials, very few studies have been conducted to assess the sex differences in efficacy and outcomes. By performing a proteomic analysis of the samples and evaluating the proteins that cells produce and secrete, the results could shed light on unanswered questions related to critical sex-specific differences in cardiovascular disease, potentially leading to improved cell therapies.

Heart disease remains the No. 1 cause of death in both men and women in the United States, yet there’s a limited understanding in the scientific community as to why it affects men and women differently. For example, women 45 years old and younger have a higher likelihood than men of dying within a year of their initial heart attack.

In addition, women have a higher risk of developing small vessel disease, in which the walls of tiny vessels within the heart muscle become blocked rather than larger arteries, causing heart-related chest pain. Because the major coronary arteries may look normal, women with small vessel disease can have a heart attack go undiagnosed and untreated.

“We know heart disease happens differently in men and women,” Taylor said. “More young women than men die of heart disease. Why is that? Is there something that happens early? If we only look at these women who are older, are we missing something major? By looking at healthy, normal younger women, we’re going to be able to do comparisons across time, comparisons by disease, and comparisons by sex. I think that’s really exciting.”

Historically, women and minorities have largely been underrepresented in research and clinical trials, especially pertaining to cardiovascular disease.

Dr. Taylor’s colleague at the Texas Heart Institute, Stephanie Coulter, M.D., a cardiologist and the director of the Center for Women’s Heart and Vascular Health at Texas Heart Institute and a recipient of the 2013 Heart to Heart Grant, is actively recruiting younger women to participate in her research registry.

“Since women are typically affected by heart disease a decade or more later than men, age may also have played a role in this underrepresentation,” Coulter said. “Our Women’s Center research is focusing on women age 18 and older to address this very issue.”

Coulter added that trials focusing on prevention in women, such as the Women’s Health Initiative and Women’s Health Study, have, in fact, had clinical impact. However, the percentage of women enrolling in clinical trials continues to be “disproportionate to the prevalence of cardiovascular disease in women, but we are seeing improvements thanks to multiple initiatives in the U.S. that continue to address the issue of women in clinical trials.”

Taylor has spent nearly two decades studying key contributors to cardiac repair at the cellular level, specifically looking at proteins cells produce and secrete based on gender as a new frontier in cell therapy.

Early on in Taylor’s career, she studied how bone marrow cells behaved based on gender. She extracted cells from male mice and administered them to female mice and vice versa, allowing her to track the Y chromosome. The results showed that only the males treated with female cells improved. This phenomenon raised the question of whether or not the bone marrow cells were the same.

After measuring the bone marrow cells that were present in males and females, Taylor discovered that the cells were inherently different: In the male mice, there were more inflammatory cells, fewer progenitor and stem cells and a different number of immune cells than in the female mice. In addition, when the bone marrow cells were placed in a petri dish, the female cells produced more growth factors responsible for recruiting repair cells after an injury.

Taylor conducted follow-up experiments in which she gave female and male cells to both female and male mice. The results confirmed her hunch: The only cells that were reparative were the female cells.

“It made me realize a critical detail for the first time: Every time we take bone marrow from a different person with the intention of delivering it back to them as a therapy, if we look at the cells present in the marrow, they’d be different,” Taylor said. “Which means, every time we’re doing an autologous cell therapy trial, in which you take bone marrow and deliver it back to an individual, you are giving each person a completely different or unique drug in that trial.”

Through the Heart to Heart grant, the data from Taylor’s research will allow her to build upon her early research on sex differences and, hopefully, identify a way to optimize cell therapy.

“Already cells are as good as some drugs. If we optimize them and choose the right cells for the right patient at the right time, … maybe we’ll hit the home run,” Taylor said.