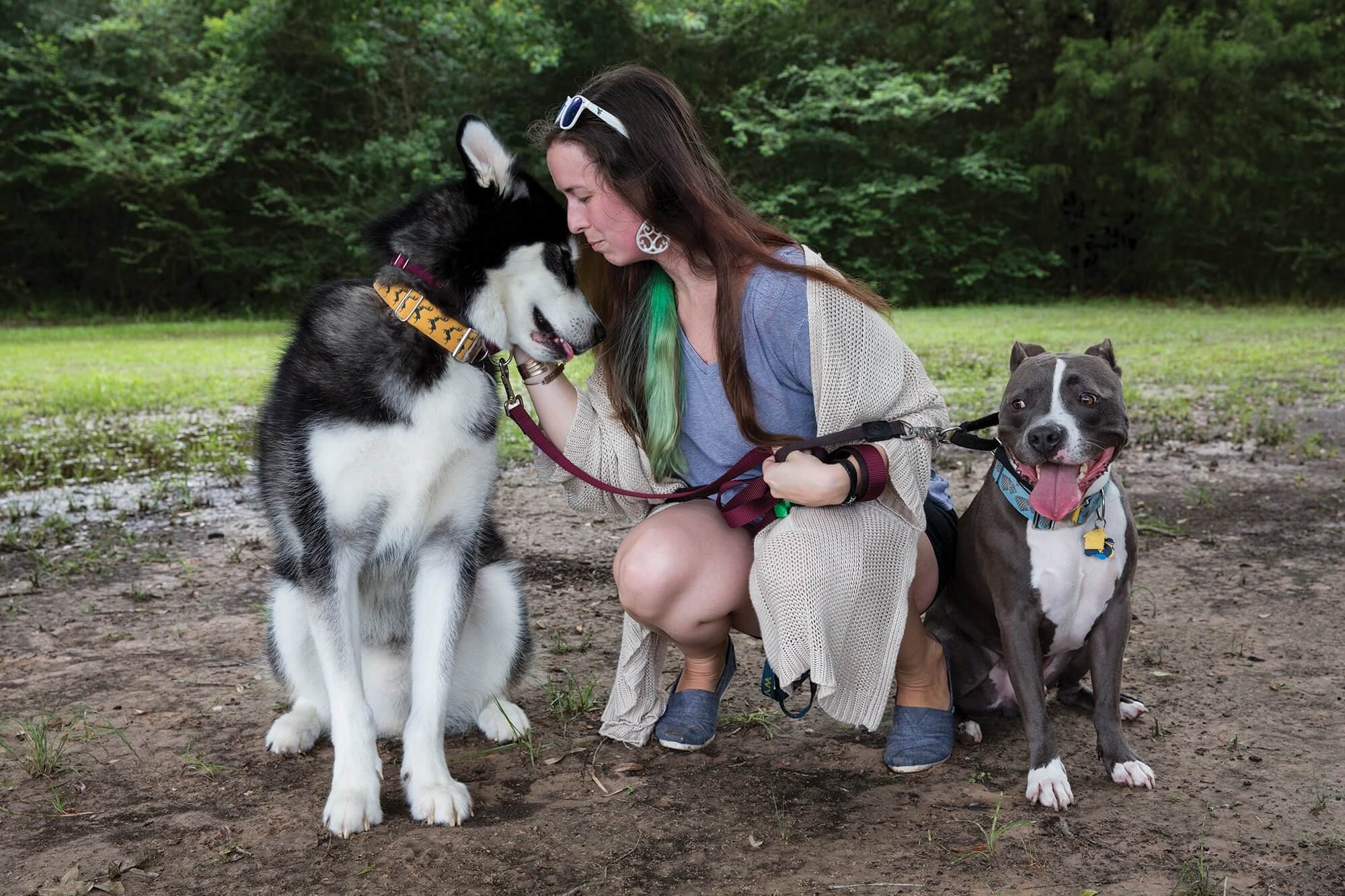 Sarrah Hannon once led an active life of triathlons, marathons and rock climbing. Now she refrains from lifting a gallon of milk.

Hannon, 30, lives with Ehlers-Danlos Syndrome (EDS), a group of genetic connective tissue disorders. The most abundant protein in her body, collagen, is failing her.

“Imagine building a house out of rotting wood, rusty nails, and less dense concrete; this is what it is like to have a body with EDS,” Hannon said.

Often called an invisible illness because its effects are not discernible to the eye, EDS can cause complications in every organ. Collagen makes tissue strong and elastic, within a safe limit. But no such limit exists for Hannon, whose body cannot make or process healthy collagen.

EDS has 13 subtypes, but only Hannon’s type cannot be identified by a genetic test—hypermobile EDS, characterized by excessively loose joints and stretchy skin. Daily joint dislocation is common.

Hannon lived with her symptoms for 25 years before an official diagnosis. She had her first knee surgery at age 11, when she tore cartilage doing gymnastics. She tore it again and again, each time resulting in more surgery. No one suspected a tissue disorder.

Just reaching over her head can cause joint dislocation. She actively keeps her arms close to her torso. “When I open a door, I keep my elbow tucked into my hip or else my shoulder will dislocate,” Hannon said.

Because EDS ravages the whole body and saps so much energy, Hannon must plan her day with care and caution. She wakes at 4 a.m. for work as a forensic toxicologist and takes the first of 39 pills before caring for her dogs. Hannon gets dressed based on how she feels—literally. Tender hips means it’s a leggings day. If her hands are sore, she doesn’t want to fuss with shirt buttons. If her costochondritis flares up, causing cartilage inflammation between her ribs, she wears a wire-free bra.

Driving is exhausting. An early morning commute minimizes heavy traffic, and Hannon can monitor blind spots without too much neck movement thanks to concave mirrors. Before the drive home, she lies down to rest and consumes food with sugar or a caffeinated energy tablet. She takes pain medication and another break after she gets home.

Because Hannon’s job involves ample paperwork and computer data analysis, she has a standing desk and wears prism glasses to avoid bending her neck. But she loves her career, and doesn’t want to quit.

At least 13 medical specialists at the Texas Medical Center help her navigate and manage EDS symptoms.

Shweta Dhar, M.D., medical director of the Adult Genetics Clinic at Baylor College of Medicine, is her traffic cop. “She’s in charge of making sure if I have a new symptom, she’s sending me to the right doctor,” Hannon said.

Dhar runs a monthly EDS clinic. She has an 18-month waitlist with close to 150 prospective patients from Texas and surrounding states.

Hypermobile EDS is difficult to diagnose because it devastates the whole body and causes numerous symptoms. Clinical criteria for diagnosing hypermobile EDS was updated this year by The International Consortium on Ehlers-Danlos Syndromes & Related Disorders, the first time in two decades.

“On the rare occasion I allow myself an ER visit,” Hannon said, “I usually bring journal articles and/or have websites ready to explain my EDS, because they simply don’t remember it from medical school.”

Although EDS can afflict men and women equally, it appears more women are affected due to their hormones, with symptoms typically starting right after puberty, Dhar said. Women generally have weaker muscle mass, and muscles must work in overdrive to control hypermobile joints.

This is not a condition that necessarily causes permanent disability, Dhar said. “We try to minimize the ups and the downs.”

Hannon lived in painful confusion for decades. After she almost fainted at a job—just one of many EDS episodes— a colleague with a medical degree urged her to give him a detailed medical history.

“He said, ‘Hey, just for fun, tell me everything that’s ever been wrong with you,’” she recalled. It took her 1 1⁄2 hours. He suggested possible causes, including EDS.

“I thought I had heard it before,” Hannon said. “It’s genetic. My cousin just got diagnosed with this.”

Her dad was diagnosed this year.

Hannon underwent her 10th surgery in February. Fraser Henderson, M.D., a Maryland-based neurosurgeon, has performed four spinal surgeries on her. He recently fused her cervical spine from C1 to C7 after diagnosing her with cranio-cervical instability. “I was dislocating my C1 on my C2 and endangering very vital vertebral arteries,” Hannon said.

Henderson has encouraged Hannon to fuse her skull to her cervical spine, but she fears that could end her ability to work. After neck surgery, Hannon began working with Monica Shroff, a physical therapist at Memorial Hermann Sports Medicine & Rehabilitation who treated her first patient with EDS a few years ago.

“It can be a little different than treating other people,” said Shroff, who offers more rest breaks to patients with EDS.

Lifestyle modifications are vital, as well. Hannon drinks with straws because she can’t fully tilt her head. She sits on the floor to eat dinner at her coffee table or on the couch with a propped tray, positions that don’t require her neck to bend. Her boyfriend handles most household chores, but when she lived alone, dirty dishes would collect for a week, laundry for up to a month, until she had the energy to tackle them.

Even “showers wipe me out,” Hannon said. “My blood pools in my feet since my blood vessels are lax. Plus, putting my arms above my head to wash my hair is super painful.”

Sleep is a big priority on weekends. Hannon “may spend one afternoon at the dog park,” she said, “but otherwise it’s all about recovery for me.”

Yet she uses her limited energy to spread the word about EDS. May is widely recognized as Ehlers-Danlos Awareness Month and both this year and last, Hannon convinced Texas Gov. Greg Abbott to sign an official proclamation recognizing this special month in the state of Texas.

“It took me 25 years of pain and confusion and doctors and people not believing me before I finally was diagnosed,” she said. “I want to raise awareness so that the next person doesn’t have to wait 25 years before they finally find out that they are not crazy, they are not hypochondriacs; they have a genetic disorder and they must act now to preserve what they have.”

Mary Vuong is a freelance writer living in Houston.