So You Want to Be a Surgeon

College student Lauren Reppert made the most of the Michael E. DeBakey Summer Surgery Program

So You Want to Be a Surgeon 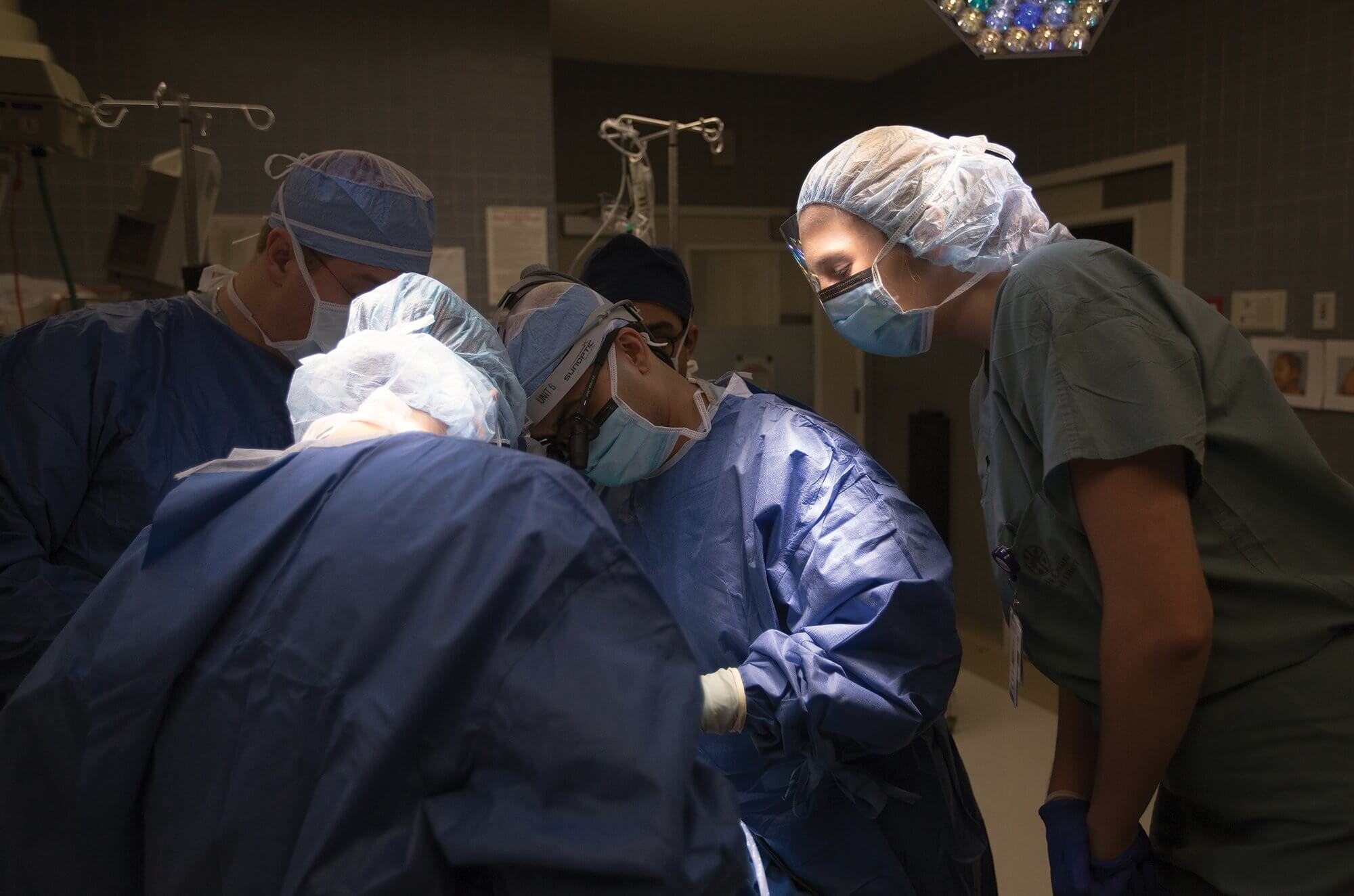 As the plastic surgeons bent over their patient, ready to begin the nasal reconstruction, Lauren Reppert leaned in, too.

Occasionally, she whispered a question or answered the operating room phone. But mostly, she watched from her stool behind the doctors, no matter how many hours passed, no matter how much her recently repaired knee ached.

“I like to see things all the way through,” said the 20-year-old, wearing scrubs and a surgical mask. “I don’t want to miss anything.”

Reppert and 15 other college students, lucky participants in the Michael E. DeBakey Summer Surgery Program, were testing their resolve to become doctors in the famed heart surgeon’s mold. For eight weeks, they had supervised access to Baylor College of Medicine surgeons, their operating rooms and their patients. Few other programs offer college-age students such an intense look at the world of surgery, Baylor physicians say.

“Dr. DeBakey thought teaching was very important,” explained surgeon Charles McCollum, M.D., the department’s unofficial historian. “He wanted the best and the brightest students, and he believed in recruiting young.”

On a sticky morning in early June, surgeons Shayan Izaddoost, M.D., Ph.D., and Bradford Scott, M.D., hustled into the conference room on Baylor’s fourth floor. McCollum was there, too.

Orientation day. The physicians hadn’t met the assembled summer students yet, but Izaddoost read their applications and felt as if he knew them. Two hundred and forty-three students sought spots in the program, but these 16 were chosen for their grades, recommendations and personal statements.

Izaddoost, program director, stood at the front of the room.

“You all have what it takes,” he said generously, “and we hope to inspire you to become surgeons. But if you decide, ‘Oh my God, there’s no way I want to do this,’ that’s OK, too. It’s better to figure it out now.”

Many of the students would don scrubs and watch operations right after lunch. But first they heard the ground rules, which are the same year after year: Starting time is 6 a.m., Monday through Friday. Average workdays last 12 hours. No, they are not paid. Yes, they do have to pay for parking.

Students may leave for a few days if they have a personal issue or even a family vacation. Just tell us, said Scott, the surgery department’s vice chair of education. There was that one student way back when who disappeared after the first day and failed to return until the very end.

The eight weeks are divided into two four-week rotations. Students are assigned a surgeon/mentor, a Baylor teaching hospital, and a specialty in early June. All of that changes in early July.

“If you don’t like your rotation, come talk to me,” Scott said. “This should be fun. If it’s not, we’ll figure it out.”

Put your phones away, Izaddoost told the students. And, he added, no social media. Don’t take pictures, don’t gossip about patients, don’t ever forget their privacy is of the utmost importance. Medical students, even residents have broken those rules at their own peril.

Come to surgery prepared, Izaddoost instructed. That means students should bone up on gallbladders if they’re about to see one removed.

Which reminded him. “How much health care do you know?” he asked the students. “That’s right. Zero. So help when the residents ask. But you’re not delivering health care. You’re here to observe.”

Which may be harder than it sounds, Scott said.

“The first time you see someone cut open, the normal reaction is, ‘Oh my God.’ If you have warm saliva, just back up, back up against a wall, and someone will find you a chair,” Scott said. “I remember two summer students who hit the floor. Realize that’s a possibility. Don’t be embarrassed.”

The students let those images sink in as McCollum, who knew DeBakey for decades, took the floor. He showed a film about his old friend, the father of modern cardiovascular surgery, then took the group downstairs to the DeBakey museum and library.

“Dr. D” died in 2008. But clearly, McCollum and the rest of the Baylor staff cherish his memory and describe him as a medical pioneer, a perfectionist who recognized and nurtured talent wherever he found it. That explains why they continue to support the program even though it costs them many hours of extra work.

Back in his office, McCollum made a brief attempt to find the exact year the program started. But it was futile. Baylor surgeons were always proud of their summer program, but they didn’t keep records for posterity.

McCollum could say this for sure: DeBakey launched the program in the late 1950s after receiving a phone call from the president and editor of the now-defunct Houston Post. Oveta Culp Hobby had sponsored an annual science fair for high school students, and she wanted to offer the winners some sort of meaningful prize. She asked DeBakey if he could host those accomplished students at Baylor over the summer.

Early on, a handful of students spent a few weeks in Baylor’s research labs. Over the years, the number of students grew, college students seemed a better fit for the evolving program than high school students, and they moved out of the lab and into the operating room.

Though they don’t advertise, McCollum said, the program attracts students from all over the country. Some of them will return to Baylor for medical school and advanced training.

The appeal of a specialty in surgery, McCollum said, is instant results. “Say a patient has acute appendicitis. You take it out, then he’s well.”

On the phone a few days later, Izaddoost said surgeons love their jobs at least in part because they form such tight and trusting bonds with patients.

“They don’t stand naked in front of everybody,” Izaddoost said. “Maybe a mom, a dad, their husband or wife. Nobody else has that kind of privilege, that special relationship.”

Of all the aspiring surgeons in the summer program, the doctors found Lauren Reppert, a Houston native and junior
at Amherst College, among the easiest to read.

“Her enthusiasm is palpable,” said Edward Reece, M.D., chief of adult plastic surgery at Baylor. “Just imagine who all she is going to touch and inspire.”

During the first rotation, Reece and Reppert worked together at Ben Taub Hospital. She showed an unwavering interest in whatever he or the other plastic surgeons were doing and watched 40 different operations in just a month’s time. At every opportunity, she was back in the OR and back on her stool.

She loved the teamwork, the commitment, the efficiency. And she was ready to listen when the usually stoic surgeons shared their thoughts.

Reece told her, “As a surgeon, you’re responsible for someone’s life. And before you operate, you have to be sure that you’re going to impact that life for the better. That’s why surgical training takes so long. Young doctors have to learn judgment.”

Reppert gulped and nodded. When she was not working, she was eating or sleeping at her parents’ home in Tanglewood.

They are oil and gas professionals.

“Where did you come from?” they teased her when she was in high school at The Kinkaid School and obsessed with idea of becoming a surgeon.

“I loved every second,” Reppert said. “I was there for every single procedure, the whole day until very late. That’s when I knew I wanted to do something in medicine, I thought for sure sports medicine. But plastics is really cool, too.”

Reppert spent the second half of the Baylor program in pediatric surgery at Texas Children’s Hospital. Everything was different from Ben Taub, she said, from the look of the hospital interiors to the types of surgeries to patient follow-up. She had hoped to meet, for example, the woman who had nasal reconstruction at Ben Taub and a second patient who underwent arduous hand reconstruction.

“That was somewhat of a frustration,” Reppert said. “The surgeries were really successful, but sometimes the patients didn’t come back for their appointments. Sometimes they didn’t even show for their scheduled surgeries.”

For Reppert it was a life lesson. Not all lives are as relatively orderly as hers.

Getting into medical school

If Reppert and her new friends had one burning question, it was this: What can we do to get into medical school?

At a question-and-answer session held at lunch in early July, Karen Johnson, M.D., a Baylor critical care physician and associate dean for admissions, told them participation in the summer program was an excellent place to start.

During her pep talk, Johnson also shared some sobering data: 55,000 students apply to medical school every year. About 21,000 are accepted.

It’s no secret, Johnson said, how to earn one of those coveted acceptances.

Of course, do well on the medical school entrance exams, take the requisite science classes and maintain sparkling grade point averages in college. Or, if your GPA is shaky early on, show signs of discipline and improvement. In addition, be involved in your community, pursue your genuine interests and keep up with the critical issues in health care today. And, if you’re invited to a medical school interview, know something about that school before showing up.

Just before the hour was up, Johnson answered one question the students didn’t ask.

If by chance any of them got in trouble, particularly legal trouble, there are places on the applications to note that.

“We shouldn’t hear about these things from anybody but you,” she said, adding that medical schools do criminal background checks. “We all make mistakes. Just be honest because you don’t know what might follow you, what might haunt you.”

All of the young people in the conference room were outstanding. Yet she left them sitting in thoughtful silence.

After lunch, but before Reppert returned to Texas Children’s in search of more surgery, she ran into Scott.

He’d just found out that they share a passion for team sports. He used to play competitive basketball and volleyball. She plays varsity volleyball at Amherst.

The link between sports and surgery? Johnson stressed the importance of teamwork at lunch. Scott and the other surgeons brought it up regularly, too.

Luckily, when Reppert filled out her summer program application last winter, she devoted most of her personal statement to the teamwork theme. She described her high school experience shadowing the orthopedic surgeon:

“I remember observing a specific surgery and witnessed how the surgeon and the assistants operated. They were completely in sync and appeared to function as a well-oiled machine. Just like on the court, we know that our teammates will execute their roles whether they are diving for balls and preventing the other team from scoring or pounding the ball and hoping to score on the other team. All six players on the court move in harmony with each other … just like a successful surgical team.”

For a moment, Scott and Reppert just stared at each other. When he reads medical school applications, he looks for student athletes, for those who know what Reppert knows.

She’s still a junior. She’s going to need at least one extra year of college to squeeze in all those volleyball practices and games and take the time-intensive lab courses required before applying to medical school.

But it sure did seem, at least for eight weeks this summer, that she had a jump start on her dream.

Claudia Feldman is a freelance writer living in Houston.