Preparing for Severe Weather in Houston

Preparing for Severe Weather in Houston

The Texas Medical Center Incident Command team is preparing for Tropical Depression Harvey and its effects on the TMC campus and facilities. Follow along on Twitter and our TMC website.

When severe weather approaches Houston and the Gulf Coast, operations leaders around the Texas Medical Center are ready to put their emergency preparedness plans into action.

“Given the critical infrastructure within the Texas Medical Center and the greater need for urgent care facilities during emergency events, TMC, in close coordination with our member institutions, continuously prepares in order to maintain operations and access for our patients, health care professionals and researchers,” said Shawn W. Cloonan, chief operating officer and EVP of the Texas Medical Center.

In 2001, Tropical Storm Allison provided a devastating lesson for the Texas Medical Center and the Bayou City as a whole.

“Allison was the most expensive tropical storm in the history of the United States,” said Robert Emery, Dr.PH., vice president of safety, health, environment and risk management at The University of Texas Health Science Center at Houston (UTHealth). “What happened with that storm was that it made landfall and then circled back. … The ground was already so saturated the water had no place to go, and that’s why it was so devastating.”

In addition to the deaths the storm caused, Allison was highly destructive in the TMC community—the storm caused the loss of years of research at The University of Texas MD Anderson Cancer Center and Baylor College of Medicine, the loss of research animals and widespread structural damage. This devastation led to numerous flood mitigation improvements throughout the medical center and the revision of emergency plans.

“Since Allison, flood mitigation improvements, including a flood gate network, above ground electrical vaults and generators and water pump systems, have been installed within the Texas Medical Center to ensure the highest level of flood protection for our critical infrastructure,” Cloonan explained.

“I think the Texas Medical Center is among the best prepared and has the best flood protection of anywhere in this region,” said Jim Blackburn, co-director of Rice’s SSPEED Center, and director of Rice’s undergraduate minor in energy and water sustainability. “They can predict both rainfall amounts and flooding. They have a plan for using emergency protection doors that exist in the medical center and basically shut the medical center down [to prevent flooding] when the time comes.”

While the medical center as a campus is prepared for an emergency at all times, Emery said it’s important for employees to be prepared at home as well.

“If you have an emergency plan in place, but the employees you are relying on are not prepared at home, that negates any of the planning you had in place,” Emery said. “We encourage employees to have water, food, medicine and other basic necessities so they can be safe and prepared to get to work.”

More than 160,000 employees, students, patients and visitors travel in and out of the medical center on an average day, so when inclement weather occurs, a unique set of challenges also arises.

“It’s an unusual anomaly that we employ and care for people from such a wide geographic area here,” Emery said. “We have some employees who live all the way up in Conroe and some from Galveston—there could be flooding in Galveston and nothing in Conroe. Because of that, we base preparedness plans on conditions in the TMC and tell our employees to exercise caution respective to their locations when traveling to the medical center.”

To ensure that all TMC employees, patients and visitors are prepared at home, Tyson Pillow, M.D., associate professor of emergency medicine at Baylor College of Medicine came up with a checklist of necessities in the case of a severe storm or hurricane: 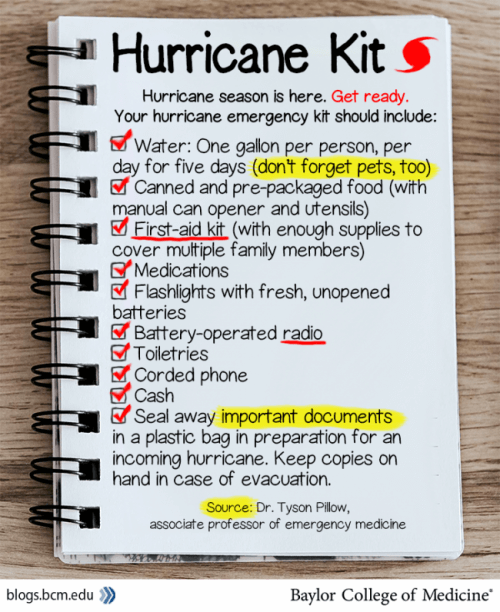 For updates on conditions in the Texas Medical Center, visit floodalert.org and to view levels of Brays Bayou and flooding in the medical center and the TMC homepage. For more preparedness tips, visit ready.gov.