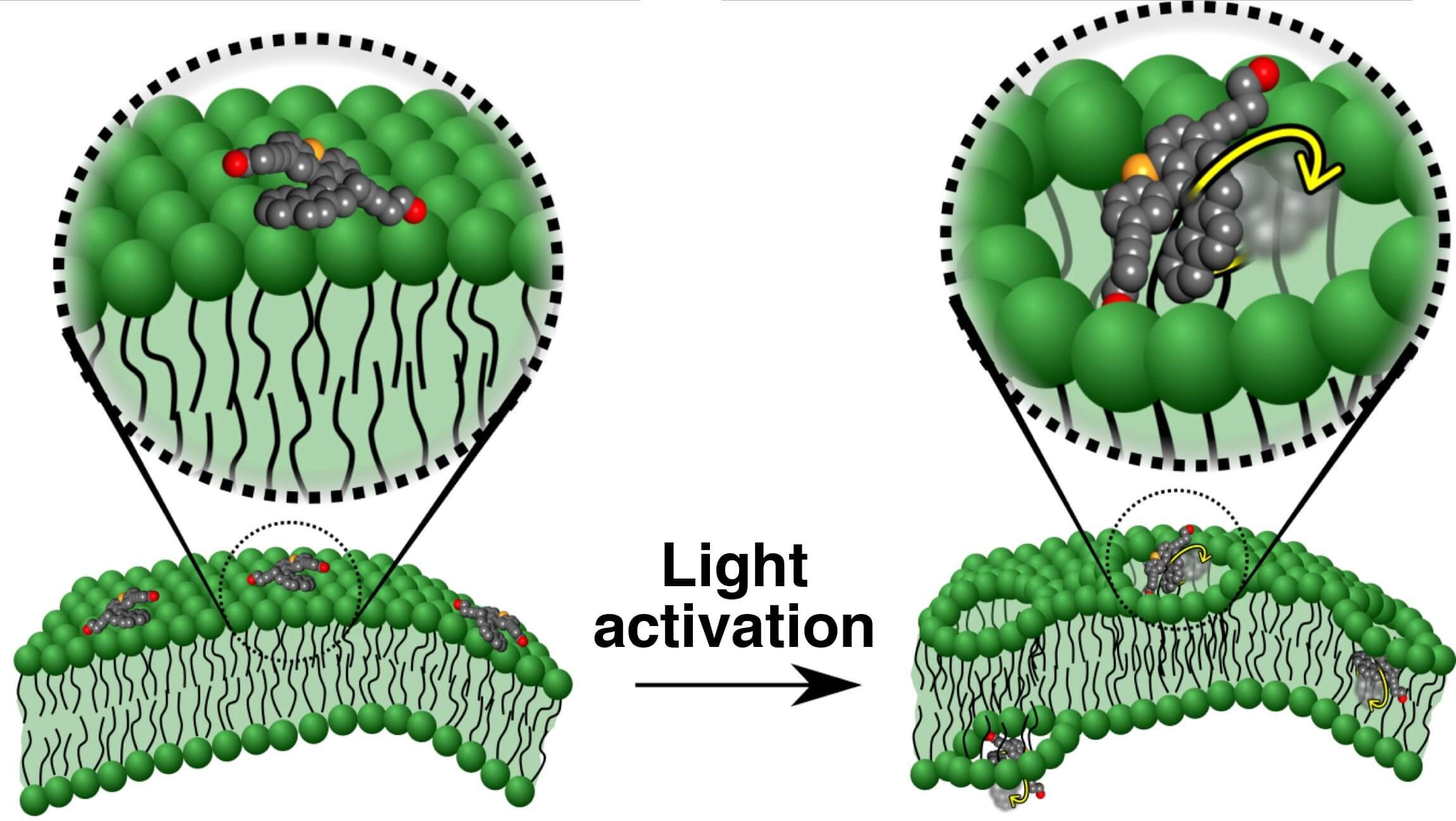 Motorized molecules driven by light have been used to drill holes in the membranes of individual cells and show promise for either bringing therapeutic agents into the cells or directly inducing the cells to die.

Researchers at Rice, Durham (U.K.) and North Carolina State universities demonstrated in lab tests how rotors in single-molecule nanomachines can be activated by ultraviolet light to spin at 2 to 3 million rotations per second and open membranes in cells.
The researchers used motors based on work by Nobel laureate Bernard Feringa, who won the prize for chemistry in 2016. The motor itself is a paddle-like chain of atoms that can be prompted to move in a single direction when supplied with energy.

Properly mounted as part of the cell-targeting molecule, the motor can be made to spin when activated by a light source.

The work detailed this week in Nature was led by chemists James Tour of Rice, Robert Pal of Durham and Gufeng Wang of North Carolina State. Their labs collaborated to create several motorized molecules that can home in on specific cells, and they viewed what happens when they activate the motors with light.

The Tour lab previously demonstrated molecular motors whose diffusion in a solution was enhanced, if not specifically directed, when activated by ultraviolet light. The rotors needed to spin between 2 and 3 megahertz – 2 to 3 million times per second – to show they could overcome obstacles presented by adjacent molecules and outpace natural Brownian motion.

“We thought it might be possible to attach these nanomachines to the cell membrane and then turn them on to see what happened,” Tour said. The motors, only about a nanometer wide, can be designed to target and then either tunnel through a cell’s lipid bilayer membrane to deliver drugs or other payloads or disrupt the 8-10 nanometer-wide membrane, thereby killing the cell. They can also be functionalized for solubility and for fluorescent tracking, he said.

“These nanomachines are so small that we could park 50,000 of them across the diameter of a human hair, yet they have the targeting and actuating components combined in that diminutive package to make molecular machines a reality for treating disease,” Tour said.

The Rice lab created 10 variants, including motor-bearing molecules in several sizes and peptide-carrying nanomachines designed to target specific cells for death, as well as control molecules identical to the other nanomachines but without motors.

The Wang lab first successfully tested the motorized molecule’s ability to open a synthetic lipid bilayer vesicle, allowing dyed solution to get inside. Next, they trapped dye-carrying molecular motors inside a vesicle, activated them with ultraviolet light and watched as the fluorescent dye faded, which suggested the motor had punched through the vesicle wall.

The researchers found it takes at least a minute for a motor to tunnel through a membrane. “It is highly unlikely that a cell could develop a resistance to molecular mechanical action,” Tour said.

The Pal lab at Durham tested motors on live cells, including human prostate cancer cells. Experiments showed that without an ultraviolet trigger, motors could locate specific cells of interest but stayed on the targeted cells’ surface and were unable to drill into the cells. When triggered, however, the motors rapidly drilled through the membranes.

Test motors designed to target prostate cancer cells broke through their membranes from outside and killed them within one to three minutes of activation, Pal said. Videos of the cells showed increased blebbing – bubbling of the membrane – within minutes after activation.

Smaller molecular motors were harder to track but proved better at getting into cells quickly upon ultraviolet activation, disrupting their membranes and killing them. Motorless control molecules were unable to kill cells upon ultraviolet exposure, which eliminated thermal absorption of ultraviolet light as the cause of disruption, according to the researchers.

They expect the rotors may eventually be activated by two-photon absorption, near-infrared light or radio frequencies, which would make the technique more viable for in-vivo treatment; this would pave the way toward the establishment of novel, easy and cost-effective photodynamic therapy.

“The researchers are already proceeding with experiments in microorganisms and small fish to explore the efficacy in-vivo,” Tour said. “The hope is to move this swiftly to rodents to test the efficacy of nanomachines for a wide range of medicinal therapies.”

Rice graduate student Victor Garcia-López is lead author of the study. Co-authors are graduate students Lizanne Nilewski and Amir Aliyan; research scientist Guillaume Duret; Anatoly Kolomeisky, a professor of chemistry and chemical and biomolecular engineering; and Jacob Robinson, an assistant professor of electrical and computer engineering, all of Rice; and North Carolina State alumnus Fang Chen. Pal is a Royal Society University Research Fellow at Durham (U.K.). Wang is an assistant professor of analytical chemistry at North Carolina State. Tour is the T.T. and W.F. Chao Chair in Chemistry as well as a professor of computer science and of materials science and nanoengineering at Rice.