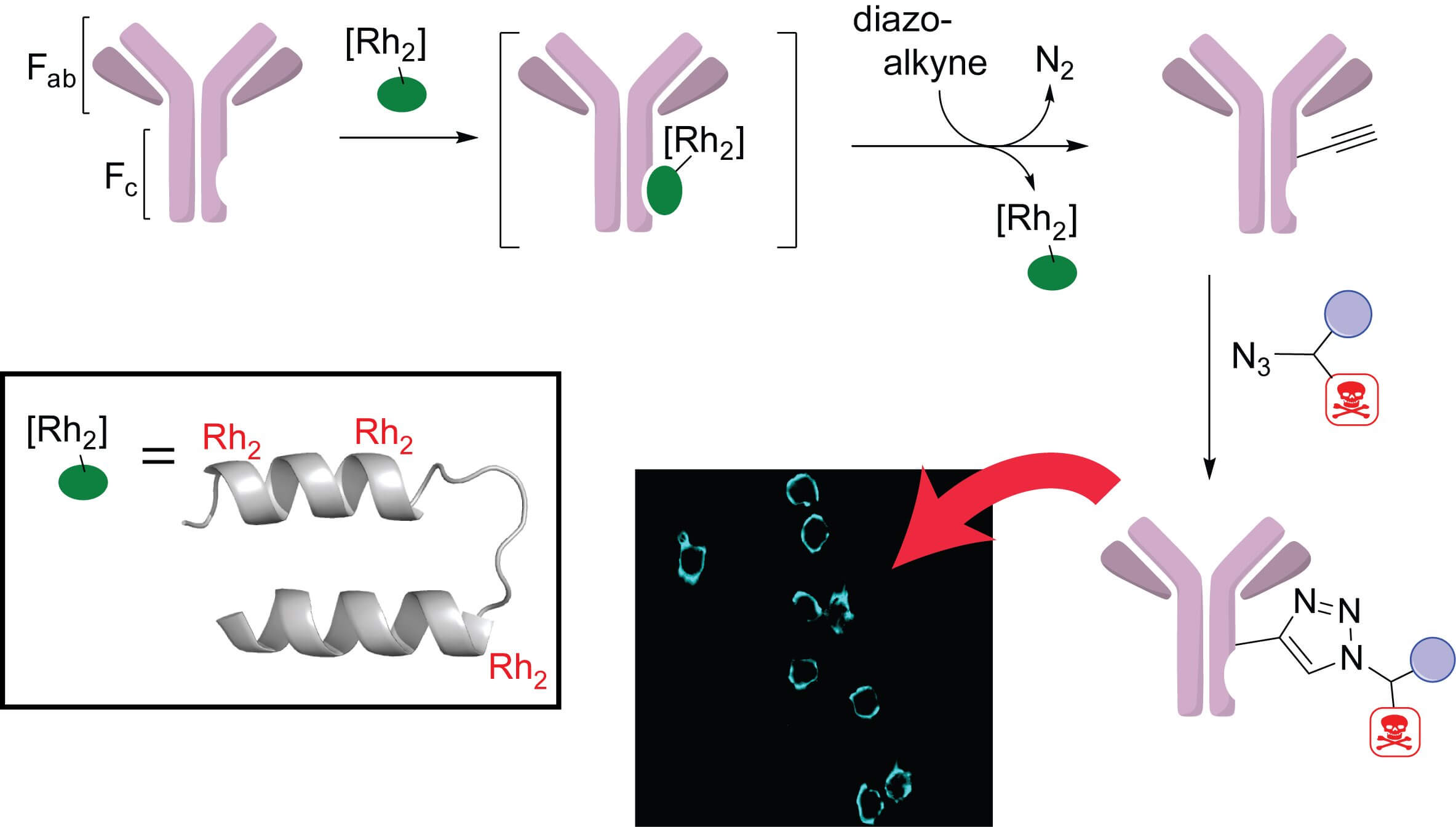 Rice University scientists have developed a method to efficiently modify natural antibodies that can deliver drugs to target cells. Adding a little extra metal is the key.

Rice chemist Zachary Ball and graduate student and lead author Jun Ohata discovered that rhodium, a rare transition metal, can be a useful element in the design and preparation of antibody drug conjugates (treatments) that have become a standard tool for targeted delivery of drugs such as chemotherapeutics.

They developed a unique multimetallic protein that acts like an enzyme to catalyze the action of a wide variety of antibodies. The simple process will allow labs to test the relative function of a variety of antibody sources and antigen targets to see which will work best on a tumor cell.

The research appears in the Journal of the American Chemical Society.

The key to Ball and Ohata’s design is having three rhodium complexes attached to specific sites of a protein that binds to the constant (Fc) antibody region. Once bound, this multimetallic peptide catalyzes site-specific attachment of therapeutic agents with minimal disruption to the antibody itself. The lab tested its complexes on breast cancer cells and confirmed that the modified antibodies retained their antigen-binding properties.

“The beauty of this catalyst is that it binds to the constant region of the antibody, so it should be broadly general for all human antibodies,” said Ball, an associate professor of chemistry and director of Rice’s Institute of Biosciences and Bioengineering. “We have a single, universal cassette system that plugs into antibodies to make drug conjugates fairly quickly and easily.”

The technique is meant to simplify what has been a complicated path to antibody drug conjugates. “To do selective chemistry on natural antibodies without first engineering their sequences has been an unsolved problem,” Ball said. “Purely random conjugation can be valuable, but it’s hard to understand structure-activity relationships when you don’t have a single structure; you get an ensemble of molecules with an ensemble of properties.” He said homogeneous conjugates are more desirable from a regulatory perspective as well.

His lab has extensive experience with the interplay of proteins and transition metals, a group of elements in the center of the periodic table, including rhodium, with diverse chemical reactivity.

“It’s just a fascinating chemical problem,” he said. “We’ve solved a lot of small-molecule selectivity problems, but when chemists move to bigger and bigger systems, the traditional approaches aren’t sufficient.”

“Our studies in the past have focused on doing the chemistry to put something onto proteins, but here we had to use the produced proteins in further biological studies, which we had never attempted to do before,” Ohata said. “It took me almost two years to finish these biology-related experiments.”

“We think of this as the frontier of chemical selectivity,” Ball said. “We’ve got this massive molecule that weighs 150,000 kilodaltons. How do we find one hydroxyl group in that massive structure and do chemistry on it? These are the kind of fundamental things that chemists love to think about.”

Ball’s lab is beginning to work with Texas Medical Center collaborators to test the new catalyst. “We want to get these in the hands of clinicians and drug development people to see what these conjugates can do,” he said.

The National Science Foundation and the Robert A. Welch Foundation supported the research.