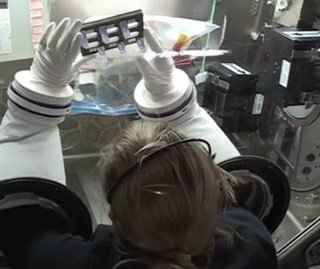 Space travel can cause a lot of stress on the human body as the change in gravity, radiation and other factors creates a hostile environment. While much is known about how different parts of the body react in space, how lungs are affected by spaceflight has received little attention until now, say researchers at The University of Texas Medical Branch at Galveston and Houston Methodist Research Institute.

That will change, though, once their research project, which aims to grow lungs in space, reaches the International Space Station. UTMB and HMRI researchers say what they learn from the study could have real implications for astronauts, as well as those still on Earth, and could lead to future therapeutics.

“We know a lot about what happens in space to bones, muscle, the heart and the immune system, but nobody knows much about what happens to the lungs,” said Joan Nichols, a professor of Internal Medicine and Microbiology and Immunology, and associate director for research and operations for the Galveston National Laboratory at UTMB. “We know that there are some problems with lungs in space flight, but that hasn’t been closely looked into. We hope to find out how lung cells react to the change in gravity and the extreme space environment, and then that can help us protect astronauts in space, as well as the lungs of regular people here on Earth.”

This investigation represents the third of four collaborative projects currently active at the HMRI’s Center for Space Nanomedicine. The center, directed by Alessandro Grattoni, chairman and associate professor of the Department of Nanomedicine at HMRI, focuses on the investigation of nanotechnology-based strategies for medicine on Earth and in space. The research is supported by the Center for the Advancement of Science in Space, NASA and HMRI.

Scientists from UTMB and HMRI prepared bioreactor pouches that include lung progenitor and stem cells and pieces of lung scaffolding. The scaffolding is the collagen and elastin frame on which lung cells grow. Space X successfully launched the payload containing these pouches Aug. 14 on its 12th Commercial Resupply Services mission (CRS-12) from NASA’s Kennedy Space Center in Florida and arrived at the International Space Station Aug. 16. On the ISS, the cells are expected to grow on the scaffold in a retrofitted bioreactor.

Once the lung cells have returned to Earth, researchers will look for the development of fibrosis, the structure of the tissues and the response of immune cells, among other changes and damage that could occur to the lung cells. Lung injuries have been found to accelerate in space, and it is through close study of those cells that therapeutics hopefully could be developed.

Nichols and Dr. Joaquin Cortiella, a professor and director of the Lab of Tissue Engineering and Organ Regeneration at UTMB, have successfully grown lungs in their lab in Galveston, but now they will see if astronauts can do the same in zero gravity. Jason Sakamoto, affiliate professor and former co-chair of the Department of Nanomedicine at HMRI, has applied his novel organ decellularization process and nanotechnology-based delivery systems to support this overall lung regeneration effort.

“We have experience working with the Center for the Advancement of Science in Space to study our nanotechnologies in action on the International Space Station,” Grattoni said. “However, we are extremely excited to be a part of this clinical study, since it may play a pivotal role in how we approach future space travel in terms of preserving astronaut health. What we learn during this fundamental experiment could lead to science-fiction-like medical advancements, where organ regeneration becomes a reality in both deep space and here on Earth.”

Researchers at HMRI will take the results from UTMB and work on developing therapeutics that could help astronauts, as well as people on Earth.

“This exploration will provide fundamental insight for the collaborative development of cell-based therapies for autoimmune diseases, hormone deficiencies and other issues,” Grattoni said.