McGovern Medical School at UTHealth is one of many medical schools updating its curriculum. 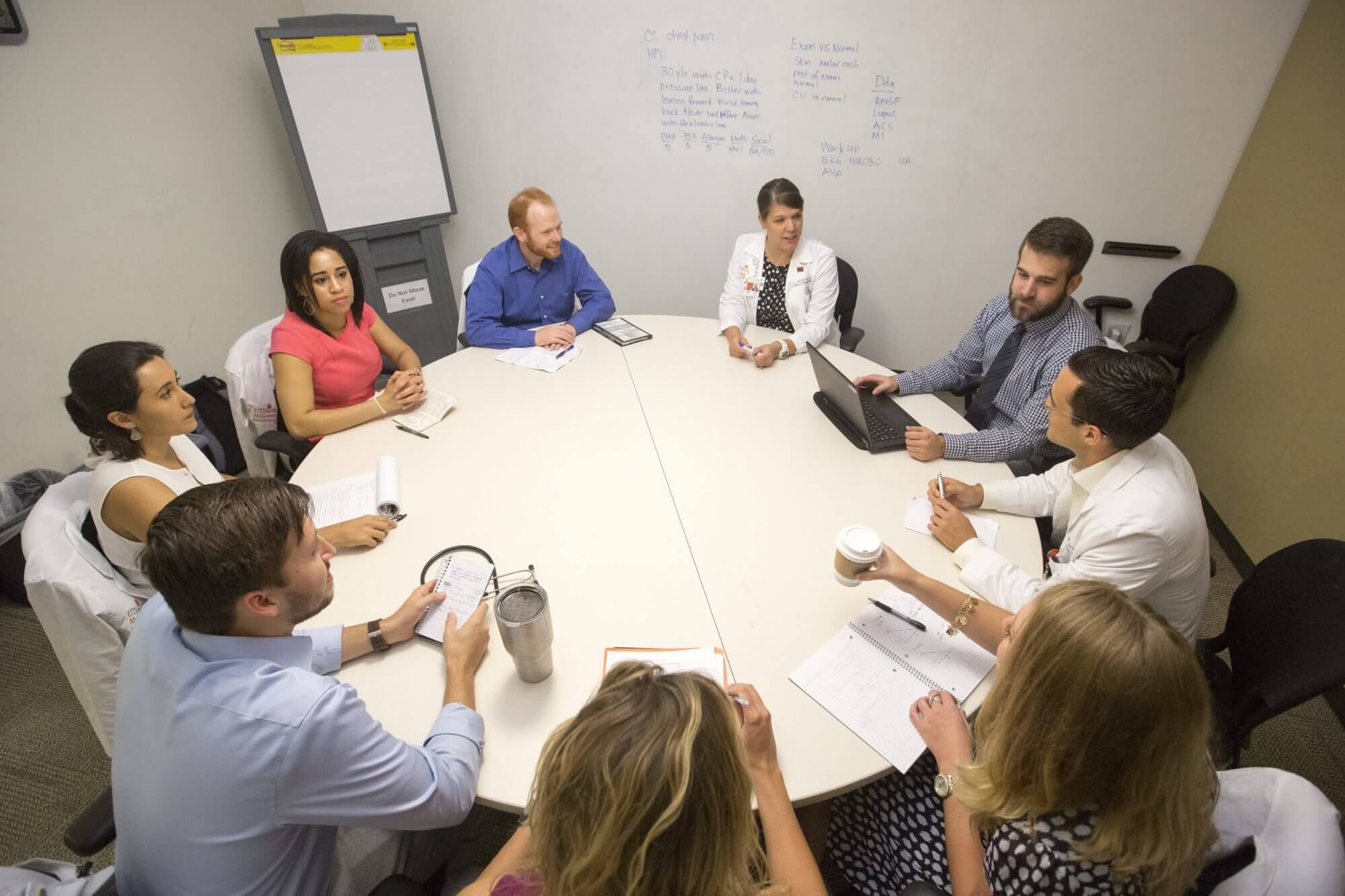 Since the beginning of the 1900s, most medical education has been divided into two parts: two years of basic science training followed by two years of clinical experience.

That format was the status quo for more than a century, but medical schools began to recognize that students needed to engage with patients earlier in their training. By waiting until the third year of medical school to interact with patients, students didn’t have as much time to translate what they learned in the classroom into a meaningful connection with a real-life patient.

In recent years, medical schools across the country have started to put their programs under the microscope. McGovern Medical School at The University of Texas Health Science Center at Houston (UTHealth) was among those seeking a better curriculum.

Established in 1969, McGovern Medical School—then known as UT Medical School at Houston—first changed its curriculum in the 1970s when it shifted from a three-year program, in which students met six days a week, to the traditional four-year format. But as the seventh-largest medical school in the country, more change was necessary to keep a competitive edge.

“For those of us who have been teaching for a long time, you always do what you can within your discipline and within your scope to try to keep up with the times,” said Leonard Cleary, Ph.D., vice chair of the curriculum committee, chair of the curriculum revision subcommittee and assistant dean for educational programs at McGovern Medical School. “But at other schools, they had taken a broader perspective and asked what they needed to do with the curriculum as a whole. That’s where we needed to go at McGovern.”

A group of faculty members, staff and students joined forces in 2012 to develop a new curriculum that reduced the pre-clerkship curriculum by two months, integrated overlapping components into a single course and—most importantly—introduced students to patient care during their first year.

Another goal was to use the new curriculum “as a recruiting tool for our incoming students in terms of what they’re interested in, as well as preparing them best for what we think is the future of medicine, which is obviously rapidly changing,” said Philip R. Orlander, M.D., associate dean for educational programs and chair of the medical school’s curriculum committee.

Under the new curriculum, implemented Aug. 1, 2016, basic science elements that were once taught separately are integrated into a single course, “Foundations of Medicine,” during the first semester.

This change marked a significant departure from the traditional siloed approach that proved—more often than not—to be tedious, time-consuming and ineffective.

“In the old system, students just took classes in these individual science disciplines, like biochemistry, anatomy, physiology, etc.,” explained David Savage, an M.D. and Ph.D. student at McGovern Medical School and member of the curriculum revision subcommittee. “A lot of times, there was not much collaboration between the people who ran those courses. They just taught the thing they always taught, so you would sometimes get exposed to something two or three times over the course of several different classes.”

The school even changed the curriculum at a pedagogical level by using a “flipped classroom” approach. Before, professors would lecture to a largely vacant classroom because students watched the recorded lecture videos in lieu of attending. However, in the flipped classroom model, students are assigned to watch video lectures on their own and then apply them to exercises, projects and discussions in class.

“I think this is the start of a gradual process of faculty members changing the way that they are interacting with the students,” Cleary said. “Just giving a lecture, which is a summary of textbooks or other sources, is not going to generate that interaction with the students.”

The most significant change to the curriculum is earlier patient interaction. Students are assigned to a McGovern Medical School clinical faculty member in the physician’s clinic starting their first year, instead of waiting until their third year for clinical rotations.

To prepare for the clinic, students learn the basic skills of medical practice—such as taking patient histories and conducting physical exams—during their first semester. They are then paired with a physician to shadow and assist during their second and third semesters. Students even interact with “standardized patients,” actors who portray different medical conditions.

By allowing students to work directly with patients their first year, the curriculum synchronizes the classroom lessons and the clinical experience. For example, while students learn about cardiology and the physiology of the heart and vascular system, their clinical skills session will focus on conducting cardiovascular examinations on patients and listening for heart murmurs.

“My belief is that it’s important to have students learn these skills very early on,” said Eugene Toy, M.D., professor of obstetrics, gynecology and reproductive sciences and assistant dean for educational programs at McGovern Medical School. “That way … they have a direct application of those basic science principles to the patient.”

Offering a clinical experience at the beginning of medical school also reinforces the humanity of medicine, something students may lose amid the pressure to succeed in such a competitive environment.

“What we have to do as educators is to approach the teaching of medicine differently so that … the human aspect, the compassion aspect, remains a priority,” Toy said. “I kind of see my courses largely as a vaccination—so to speak—against some of the cynicism.”

For Toy, this means bringing patients into the lecture area, showing videos of real people who are affected by different diseases and “constantly reminding the students that the reason they are here and the reason why this will be fulfilling for them as a career is helping people.”

The new curriculum also focuses on quality assurance and patient safety. McGovern Medical School is one of 10 medical schools selected to participate in an Association of American Medical Colleges (AAMC) pilot project that assesses 13 activities all medical students are expected to perform upon entering their first day of residency, such as gathering patient history, performing physical exams, interpreting common diagnostic and screening tests, and obtaining informed consent for tests and procedures.

“In the past, we probably just hoped that everybody did these well because we assumed we taught them well,” Orlander said.

Recent studies have shown a performance gap between the transition from medical school to residency training, according to the AAMC. Program directors across the country have grown increasingly concerned that medical students are not well prepared to make the transition to residency.

Although all accredited schools are required to delineate educational objectives and competencies, the Liaison Committee on Medical Education, which accredits medical education programs in the United States and Canada, does not yet have a core guideline of behaviors and skills that all graduating medical students are expected to perform.

As part of the pilot project and the new curriculum, preceptors observe and evaluate students performing basic skills to ensure they are ready for their first days as doctors.

“You can talk about that all day in a classroom, but until you throw a student in and allow them to experience firsthand the physician-patient and physician-family dynamics … then I think that makes the medical student that much more prepared as a resident,” Savage said.

Change can be difficult to embrace. The old curriculum was entrenched in tradition, and some faculty members at McGovern Medical School were resistant to the idea of moving away from the model that had produced high test scores and residency match rates for more than 30 years.

But 93 percent of U.S. medical schools implemented or were in the process of implementing a curriculum change between 2012 and 2013, according to the AAMC. In addition, the American Medical Association launched the Accelerating Change in Medical Education initiative in 2013, providing $11 million in grants to stimulate major innovations at 11 of the nation’s medical schools. Since then, the initiative has expanded to 32 schools across the country and continues to work toward modernizing medical education.