Rice Scientists Simplify the Incorporation of Nitrogen into Molecules

Rice Scientists Simplify the Incorporation of Nitrogen into Molecules 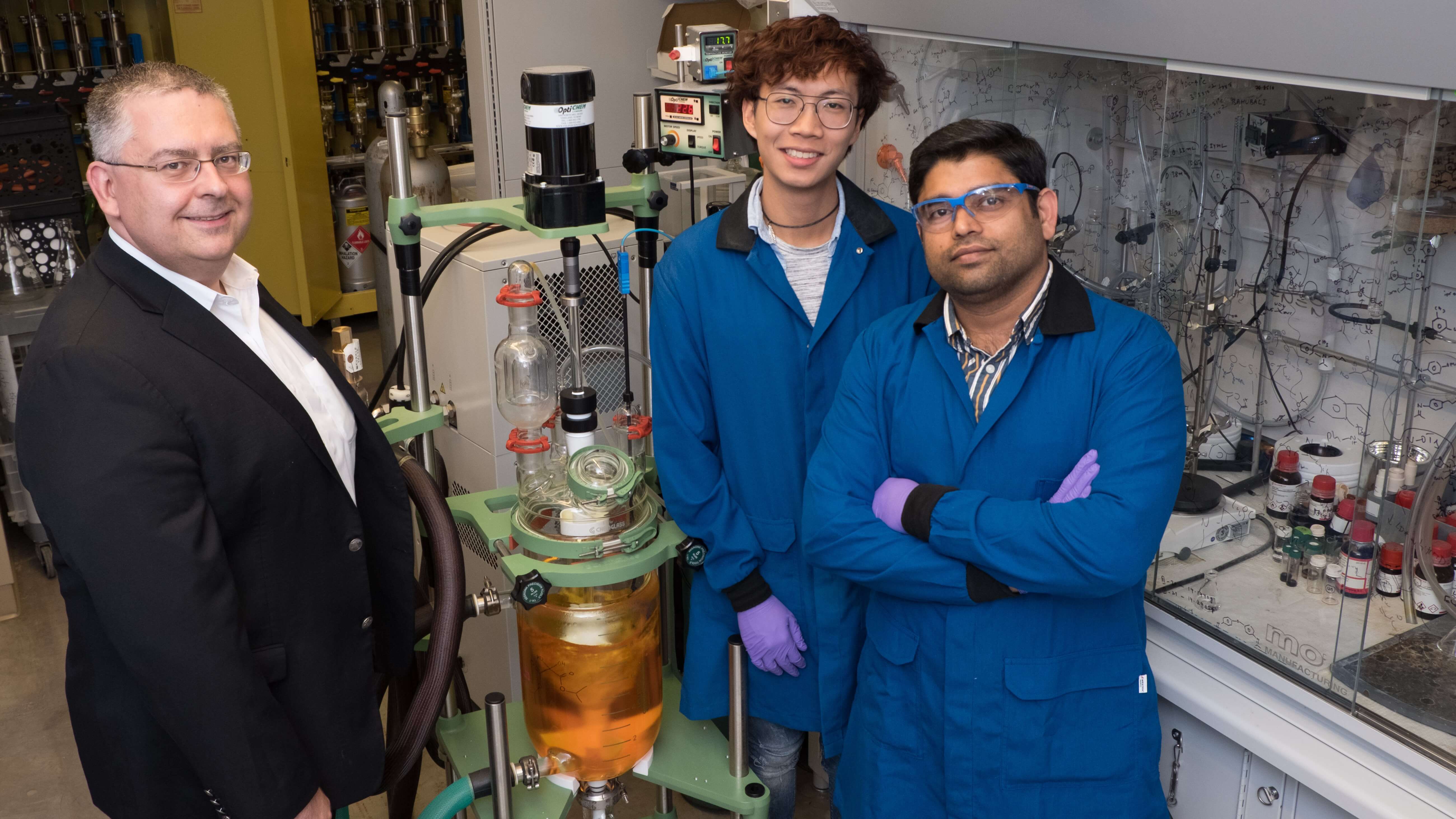 A Rice University laboratory that specializes in synthesizing reagents and intermediate molecules for the design and manufacture of drugs and other fine chemicals has delivered on a promise to generalize the synthesis of electrophilic (electron-poor) aminating agents.

Aminating agents are valuable building blocks that can incorporate nitrogen atoms into molecules in a single efficient step without the use of contaminating metals or catalysts.

In his lab, Rice synthetic organic chemist László Kürti showed a tray piled high with the new reactivity-modifying agent, a nitrogen umpolung reagent used to synthesize aminating agents. An umpolung reverses the polarity of nitrogen atoms, which allows them to react differently with other atoms.

The process is the subject of a paper in the Journal of the American Chemical Society.

When the design of a new drug involves trial and error and each trial may take hundreds of chemical steps over days and weeks, any effort to simplify existing synthetic routes is worthwhile, Kürti said. “This novel approach represents an operationally simple, scalable and environmentally friendly alternative to transition metal-catalyzed, carbon-nitrogen cross-coupling methods that are currently used to access structurally diverse amines,” he said.

Amines are compounds derived from ammonia molecules that have one nitrogen and three hydrogen atoms. In primary amines, one hydrogen is replaced by a substituent, like an aryl or an alkyl group. Secondary amines have only one hydrogen directly attached to the nitrogen besides the two substituents.

Rice’s electrophilic aminating agents simplify the production of secondary amines from readily available and inexpensive precursors. The agents enable the rapid formation of carbon-nitrogen bonds that are at the heart of a wide range of chemical compounds, including 80 percent of drug candidates and many agrochemicals, Kürti said.

Aminating agents form new carbon-nitrogen bonds in an unusual way because their nitrogen atoms are electron-poor; that is, they carry a partial positive charge and are able to react readily with carbon nucleophiles that are electron-rich.

“Convenient preparation of bench-stable electrophilic nitrogen sources has been an unmet synthetic need,” Kürti said. “This is due to the lack of a general and practical polarity-reversal method that converts abundantly available nitrogen-nucleophilic primary aliphatic and aromatic amines to the corresponding nitrogen-electrophilic aminating agents.”

The team led by Rice postdoctoral researcher Padmanabha Kattamuri solved the problem with a synthetic approach that relies on an umpolung reagent, ketomalonate hydrate, that reverses the nitrogen atom’s normal polarity. The lab can synthesize hundreds of grams of the reagent in a large reactor over 2 1/2 days.

Kattamuri said the lab used the contents of an open container of the umpolung reagent for nearly two years without any drop in its ability to function, which proved its stability.

“The synthetic and mechanistic results presented here constitute a breakthrough in the field of carbon-nitrogen bond-formation and will be of considerable interest not only to synthetic and medicinal chemists but also to the theoretical, structural and organometallic communities,” Kürti said.