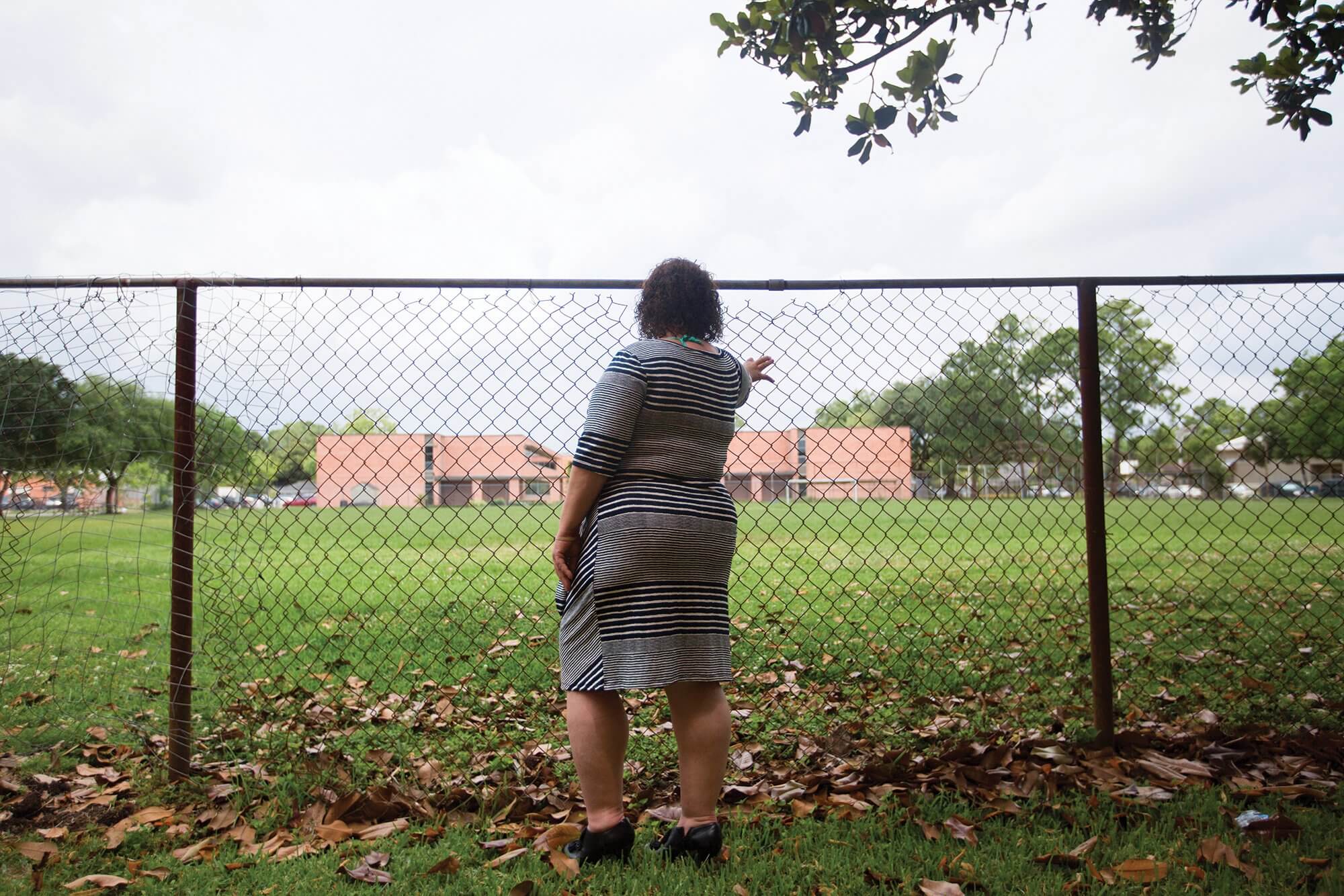 At just 2 years old, Mari became a victim of sexual molestation. The perpetrator, her grandfather, continued to sexually abuse her for years. At 11, she ran away from home and met a man who promised her the world. Then he forced her into prostitution.

For runaways and children of abuse, life can become an unforgiving cycle of commercial sex, trafficking and drug addiction. After a brief arrest, Mari—who asked that her real name be withheld for privacy reasons—worked hard to break free. But after her husband died, she tumbled back into the streets, working truck stops throughout the country and shooting herself numb with drugs to cope. Like many women forced into that world, she was only able to escape through incarceration.

Today, Mari resides at Angela House, a local residential treatment program that helps women transition back into society after leaving the criminal justice system. The nonprofit works closely with Healthcare for the Homeless Houston, an organization that helps women with a history of sexual exploitation regain health and independent living skills through a program called Healthy & Whole. According to Andrea Link, M.D., program manager for Healthy & Whole and a clinical assistant professor with the Department of Family and Community Medicine at Baylor College of Medicine, a staggering 93 percent of the women at Angela House have a history of sex trafficking or prostitution.

Programs such as these are in high demand in Houston, considered a major hub for all forms of trafficking due to the intercontinental airport, major water port, international border and sprawl across the I-10 corridor. Statistics released by the National Human Trafficking Hotline show that Texas is responsible for the second-highest number of calls in the country—California is first—and the majority come from Houston.

While in captivity, many of these victims seek medical help.

A study by the Family Violence Protection Fund found that nearly one-third of trafficking survivors had been seen by a health care provider during their time in captivity, for reasons including unwanted pregnancies, STDs, drug-related conditions and other circumstances associated with abuse. Additional studies estimate even higher numbers.

“Emergency departments are often easy places for a lot of these victims to go because they can be anonymous,” said Reena Isaac, M.D., medical director of the forensic nursing team at Texas Children’s Hospital. Yet as many as half of these individuals were not identified as victims of exploitation during their clinical experience.

“What is needed is not only more resources, but I would also argue training—for the individuals who we know are going to come into contact with trafficking victims,” said Lisa Muftic, Ph.D., director of the undergraduate criminal justice and criminology programs at Sam Houston State University, during a recent forum on human trafficking in Houston. “We know this has been very beneficial and very effective in law enforcement and believe that the same would be true in the health care arena.”

Clinicians are in a unique position to break the cycle for victims by connecting them to appropriate care and rehabilitation services. But first, they must recognize the signs associated with trafficking.

“Studies have shown that PTSD rates in women who have been prostituted on the streets are similar to that of combat-exposed Vietnam veterans,” Link said. “When we tell the women this, the relief on their faces is incredible. Because they have been at war. I think a lot of people haven’t recognized that. But trust me, they’ve been at war.”

Other patterns observed among victims of sex trafficking include scripted answers or inconsistencies in stories about their illness or injury. Their traffickers often accompany them to medical appointments, speaking for them as much as possible.

“Another thing to look out for is simply fear,” said Juhi Jain, M.D., pediatric resident at Baylor College of Medicine and a chair of the anti-human trafficking committee within Doctors for Change, a Houston-based organization that advocates for improvements in health care by connecting medical providers to the public health and policy arena. “They’re not able to look you in the eye, or they’re not able to tell you their story. And if they do, they don’t tell you exactly what’s happening.”

Sometimes, the red flags are staring doctors in the face. Certain tattoos with branding designs and bar code images, for example, serve as physical manifestations of the traffickers’ ownership and power over victims.

It was exactly that—an unusual tattoo—that clued Isaac into a patient’s story a few years ago. A teenage girl had come in with a fairly minor complaint, but during the examination Isaac noticed the name of the girl’s “boyfriend” tattooed backwards in large letters across her chest.

“That’s a very curious sign,” Isaac recalled. “If you understand the psychology of both the trafficker and some of the victims, essentially the trafficker tries to depersonalize the victim. Why was this person, this so-called boyfriend’s name, tattooed backwards on her chest? Because the first thing she would see in the morning when she looked in the mirror was his name.”

Isaac was able to help rescue this patient from her situation because she knew the signs and, most importantly, asked the right questions. In fact, a study by the Vera Institute of Justice found that trained health care providers can identify 60 to 80 percent of human trafficking victims by simply asking two questions: Where do you live? What do you do for work?

“Everyone should be able to tell you where they live or what their job is, and if they have a hard time describing that, or if they tell you something that doesn’t sound right, then you delve in deeper and things start to come out,” Jain explained.

Additional screening questions might be: Is anyone forcing you to do anything you do not want to do? Can you leave your job or situation if you want? Have you or your family been threatened if you try to leave?

One of the most critical and challenging actions a clinician can take is separating the patient from whomever is accompanying him or her at the time of the visit.

“You want to be able to have a confidential and secure conversation,” Isaac said. “Be sure to convey care and concern, keep an open dialogue and show patients respect and patience.”

According to Mari, establishing trust with trafficking victims is a critical step in helping them.

“You have to earn their trust,” Mari explained. “Offer little things, just little things to help. Because then they realize that somebody cares about them and doesn’t want anything back. It seems like such a little thing to buy them shampoo or give them a sandwich, but it means the world to girls like me that are out there.”

If trafficking is suspected and the patient is under 18 years of age, individuals are required by Texas law to report it immediately—just like any other case of child abuse or neglect. Reports should be made to law enforcement or the Department of Family and Protective Services (DFPS) at 1-800- 252-5400 or at txabusehotline.org. The National Human Trafficking Hotline number is 1-888-373-7888.

If the patient is over 18, clinicians and other individuals are not legally bound to file an official report. Experts suggest that health care providers attempt to separate adult patients from any individuals accompanying them and ask screening questions to assess the situation, but to recognize that some adult victims may not feel comfortable or safe exposing their personal situation to law enforcement at the time of medical treatment. The one exception to this rule: suspected abuse of an elderly or disabled person, which requires reporting in the same manner as minors.

Notably, clinicians may always make anonymous tips without revealing protected patient information to local law enforcement, the DFPS hotline, or the Department of Public Safety, accessible via iWatchTX.org. Clinicians should also refer patients to community resources, even if they are not ready and willing to utilize them at the time of their encounter.

“Even if they don’t allow you to report their situation while they’re there, it’s important to give them a safe place to come and talk if they ever want to get out of that situation,” Jain said.

Increasing general education and awareness surrounding the issue is also recommended. Doctors for Change has developed a one-hour curriculum approved for Continuing Medical Education credits that is available to local hospitals and health systems. It focuses on identifying potential victims, best practices for helping victims in the health care setting, and available resources in Houston. HEAL Trafficking, a national organization that tackles the issue through a public health perspective, also released an extensive protocol toolkit for health care settings.

“It’s important, especially for us physicians, to be aware of this issue and to have it at the back of our minds when we’re seeing patients,” Jain said. “If it’s there in your mind, you may be able to catch someone who is in that situation and help them. Any small contribution you can do is going to help.”

For Mari, incarceration was the way out. But others may be able to escape through the help of a thoughtful clinician—someone who took the time to learn the signs of trafficking and had the courage to ask the right questions. 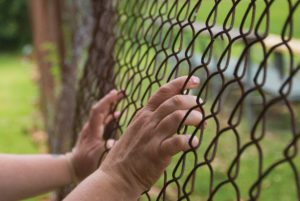 Often described as a modern-day form of slavery, trafficking is the coercion of human beings for the purpose of forced labor or sexual exploitation. Trafficking does not have to involve the physical movement of a person, and traffickers in the United States prey on U.S. citizens more than international or illegal residents. The average age of a child recruited or forced into prostitution is 11 to 14 years old. An estimated 600 children and adolescents are victims of forced sexual acts every night in the state of Texas.

Common risk factors associated with falling victim to sex trafficking include a history of sexual abuse or substance abuse, disability, mental illness, and unfamiliarity with the local language or surroundings.

Individuals from abusive homes or impoverished situations may be lured by a trafficker’s affection or promise of a better life, and runaways often welcome a trafficker’s offer of food and shelter. According to National Incidence Studies of Missing, Abducted, Runaway, and Throwaway Children, an estimated one out of every three minors who run away is lured into sex trafficking within 48 hours of leaving home.

Victims are recruited through physical contact—on the street, in shopping malls—or, increasingly, via the internet. Advances in technology have granted traffickers more access and increased their methods of exploitation. A recent local Facebook post recounted the story of a young girl who was taped without

her knowledge during a sexual encounter with her boyfriend; unbeknownst to her, he was caught up in a sex trafficking ring. His accomplices threatened to post the video on social media if she did not comply with their demands and the girl, humiliated and scared, was reportedly forced into prostitution. Booked through online websites like Backpage, her traffickers eventually told her she could work less if she recruited others.

It’s a vicious cycle that exploits an individual’s vulnerabilities. Traffickers place victims in their debt by requiring quotas and demanding long work hours. Through threats, drug or alcohol dependency, isolation and physical abuse, they make victims feel like it is impossible to escape.

Common signs of sex trafficking: Tips for the medical community